Vaporesso ARMOUR Pro Kit Review | All HAIL The OMNI Board 4!

The Vaporesso ARMOUR Pro kit is a 100W TC mod that comes with the mesh coil-rocking Vaporesso Cascade Baby tank. Is it any good? Or does its single cell nature cause problems? I used it for a month to find it…

Vaporesso. The name always reminds me of coffee, or coffee machines, for some reason. Weird, I know. But that’s what I think of every time I hear or read the name.

What I should think of, though, is things like the company’s OMNI board, it’s design philosophy, and the fact that it makes some of the best mid-range vape mods money can buy.

I’ve tested multiple Vaporesso mods over the years. Maybe 10 or more. And for the most part, they all performed well. I didn’t like the Revenger one bit – it looked and felt cheap. Like a second-rate knock-off.

The Vaporesso ARMOUR Pro is the company’s latest play for your money in the latter part of 2018.

It’s a standard vape mod/tank kit and it certainly looks the business. But there are some red flags…

As always, I used this mod and tank combo for a month solid. Read on to find out what I made of the Vaporesso ARMOUR Pro kit.

I have a love/hate relationship with solid-black mods. I love them because they look smart and black is my favorite color.

But they’re also impossible to photograph properly, and this causes lots of woe for obvious reasons.

Either way, the Vaporesso ARMOUR Pro mod is a smart-looking piece of hardware. The fire key is built into the OLED display; it sits along the entire left side and looks very classy indeed.

The mod itself is super-portable too; it sits snuggly in the palm of your hand, and the bodywork and chassis are free from over the top branding and/or logos.

“Amour Pro” is etched, lightly, on either side of the mod and that’s it for branding. All in, I think Vaporesso was going for a “classy” aesthetic with this mod. And in my view, they have achieved it with aplomb.

The battery door is a bit of an odd one. I like the way it’s integrated, but I don’t feel 100% confident about how it will hold up in the long term. It feels a little too flimsy… like it could just stop catching all of a sudden.

I could be wrong though; an update in a few months is the only way to really tell (and I don’t have a time machine). The jury’s still out on this one. 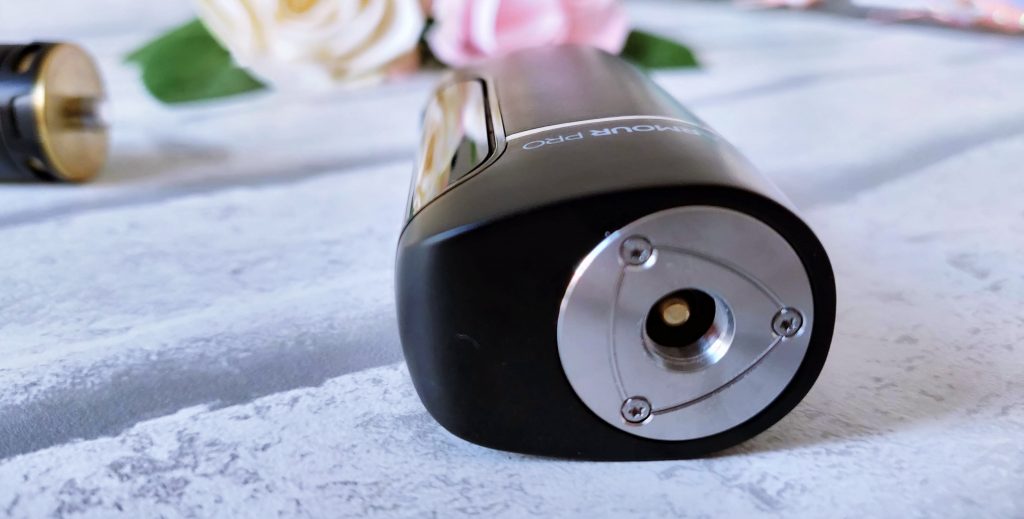 The 510 thread and everything else on the mod are engineered exquisitely. I also really dig the rounded triangle pattern on the 510; it looks like a symbol from a UFO or some ancient, Mesopotamian cuneiform.

Bottomline? It ain’t the best looking mod in the world. Or the most interesting. But it is very tidy in the design department. Ergonomically speaking, it is more or less flawless.

It fits in the palm of your hand, the fire key is positioned beautifully, and the OLED display looks really smart. Other than the potentially squiffy battery door mechanism, I don’t have any complaints.

Vaporesso, true to form, provides a delectable haul of goodies inside the Vaporesso ARMOUR Pro’s box.

You have two coils (0.3ohm GT Cell, and a 0.18ohm GT Mesh coil) as well as spare glass tubes, a Delrin drip tip, and all the usual instructions and warranty papers.

The star of the show, however, is Vaporesso’s OMNI Board, now in its fourth generation.

I’ve been using OMNI Board-powered mods since the OMNI Board first came out, and it is easily one of my favorite vape chips.

It just works. So very, very well. Between Vaporesso and GeekVape mods, vapers have never had more choice in the mid-range of the market.

You get support for a dizzying array of vaping modes, which includes TC, curve settings (both power and temp), Bypass Mode, and pretty much everything else in between. 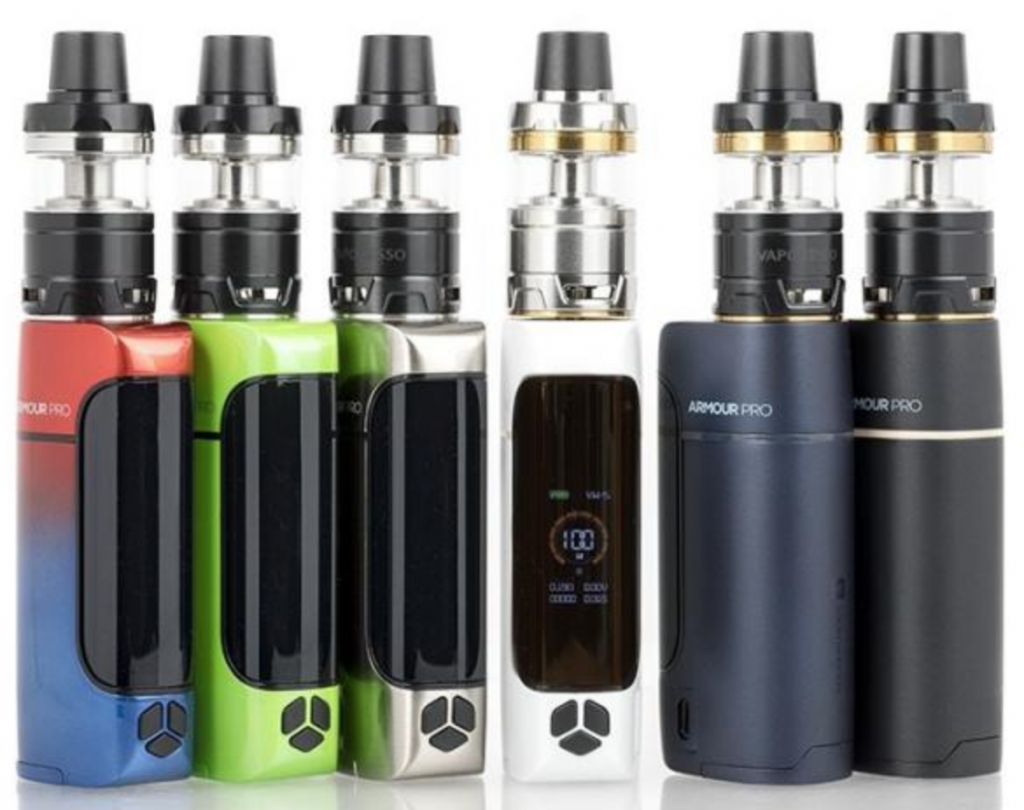 Check Out ALL The Color Options Here

The OMNI Board 4 also hits like a freight train; you’re looking at 0.0002s from when you hit the button until it fires. That is RAPID, almost faster than the blink of an eye.

Vaporesso has also ensured the OMNI Board makes things safer too. It’s jam-packed with all kinds of safety features and fail-safes.

Essentially, the OMNI Board is like a lightweight DNA chip. It is truly a wonderful thing.

And this brings us nicely to how the mod performs. With the OMNI Board, you’re basically covered for whatever style of vaping you want to do – TC, Bypass Mode, Power, Curve-based. It does them all.

And it is NOT a jack of all trades, master of none type of mod, either. Nope, this mod does everything it does with a cool, mercantile precision. It makes you feel confident. It’s got your back, whether you’re in Bypass Mode or TC.

I’ve run a multitude of tanks on this thing, from RDAs to sub ohm tanks, and it handled them all fine. Nothing knocks it off its game.

And when you can do things like lock the atomizer’s resistance, a neat little feature that ALL mods should have, you can smash up things like Bypass Mode with an RDA and know nothing bad’s going to happen.

Power delivery is constant and predictable; it fires rapidly and the output is delivered in a noticeably steady but thorough fashion. And it doesn’t matter what mode you’re in or what style of tank you’re using.

Bottomline: for overall performance and consistency, it is more or less impossible to pick fault with Vaporesso’s OMNI Board, its modes, and how it performs in reality. Super solid stuff all around, really.

This is where things take a slight downward turn. I don’t love the Cascade Baby tank. I didn’t like the flavor I got from the coils; it felt flat and muted. And I think the tank itself is uglier than a bag of dicks.

I’ve tested A LOT of mesh coil vape tanks in the last six months, and the Cascade Baby didn’t come anywhere near the level of the FireLuke Mesh Pro, the OBS Draco, or the Falcon tank.

The Tank. He UGLY!

The Mesh Coil. Again, Not A Fan…

It’s also super-ugly as well, did I mention that? It’s too long and it looks ungainly, especially on top of such a small, smart-looking mod. I wish it was smaller, squatter – that’d work a lot better.

Coil head performance is OK. The mesh one performed better than the standard wire one, though this is to be expected. It just never delivered that thick, swooshy flavor you tend to expect from mesh coils.

Overall, the tank is somewhat disappointing. There are WAY better options out there right now. Tanks that look better, have better coil heads and deliver way more flavor.

Another negative? Kinda. I have a love/hate thing with single cell mods. In some contexts they’re great; like, if you’re running a Kayfun or a single coil RDA.

Pair one up with a sub-ohm tank, however, and you have a recipe for anger and loathing.

Why? Simple: if you’re running the mod in and around 60-80W, you’re never going to make it through a day on a single cell. Probably not even half.

Does that sound like fun? It’s not. I’ve been doing it all month and it sucks.

I hate carrying spare batteries around. I hate worrying about running out of battery power when I’m out with friends.

This is why this mod, while excellent in the right context, was not included in our Best Vape Mods Guide.

It doesn’t make any sense to fit a single cell to a mod that is designed for sub ohm vaping. The power demands on it – even when you’re running meaty 21700 cells – is just too much.

Running it on a single 18650 is a joke; you’re looking at 3-4 hours tops with normal to heavy vaping.

This is when single cell mods make sense. Not with a tank that is designed to run anywhere from 50-80W.

It makes no sense, it’s like fitting a 10-gallon petrol tank on a car with a 4-liter V6 engine. Utter madness.