The AUGVAPE V200 has been getting A LOT of praise from the vaping community. I just spent three weeks with the device. Read on for my review!

I’m just going to come right and say it: I’m a massive fan of this mod.

The AUGVAPE V200 had me impressed right from the beginning: the packaging, the color scheme (mine’s red). Even the name. Everything is very much on point.

It just looks and feels classy. Like a lot of care and attention has gone into every aspect of the device – from the idea behind its styling to how it’s packaged.

I like it when this happens. When you get a good feeling, right out the blocks.

This usually means the mod will make it into our hallowed Best Vape Mods Guide.

It does feel good when you look at something and it tells you a story before you’ve even unboxed it.

I know and like AUGVAPE quite a bit, so I was really hyped about the V200 before it arrived on my doorstep.

I knew it didn’t feature TC vaping before I got it. This isn’t an issue for me, as I never TC vape.

I’m a wattage mode boy through and through.

And I knew it was all about power, simplicity, and performance.

Over the past three weeks, this mod has been everywhere with me. I’ve tested a bunch of RDAs on it too.

What follows is my honest review of the AUGVAPE V200. Enjoy! 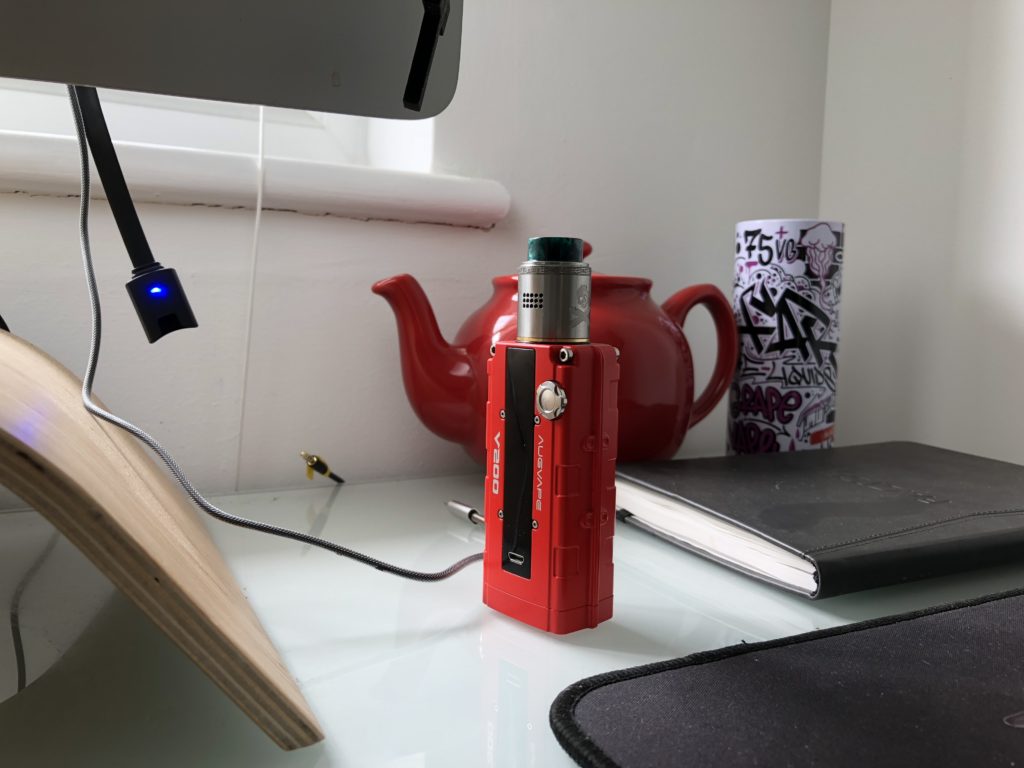 The AUGVAPE V200 design is based on a Honda engine block.

The B VTEC, apparently.

I know literally nothing about Honda engines. But I am told the one it is modelled on is fast.

The chassis itself is made to look like the actual engine block and it even features a little oil cap-style clicker for flicking through menus and upping and downing the power.

It even has exposed screws, which look awesome. I really dig the industrial design of this mod. 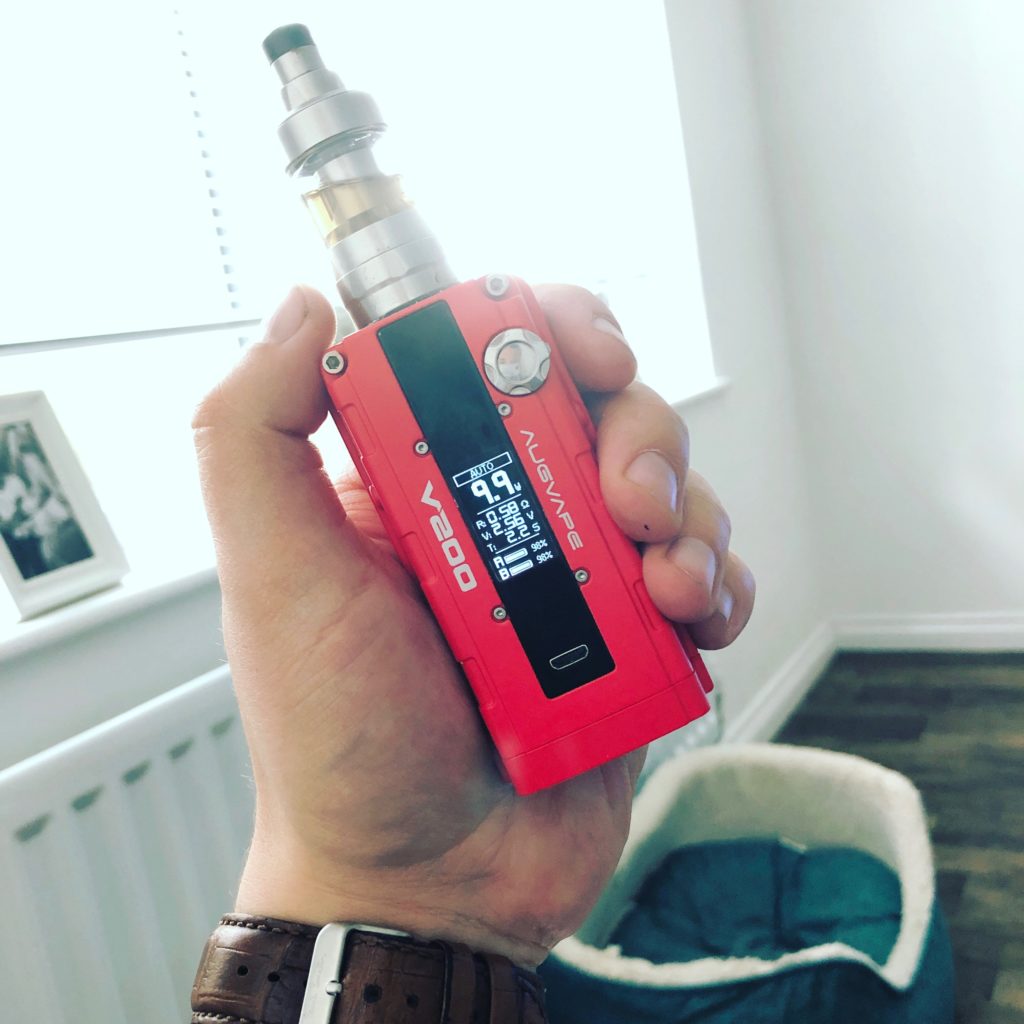 The display is secreted away in a black panel that runs down the front portion of the mod.

And the fire key? That’s built into the display, placed right at the top. It is 100% invisible. And if you’re like me, and never read instructions, it will definitely take you a few minutes to find it.

The battery door is at the bottom, and it slides open and seals easily enough. There is also a USB port for updating the firmware too.

The machining on this thing – especially at the top where your 510 connects – is sublime. 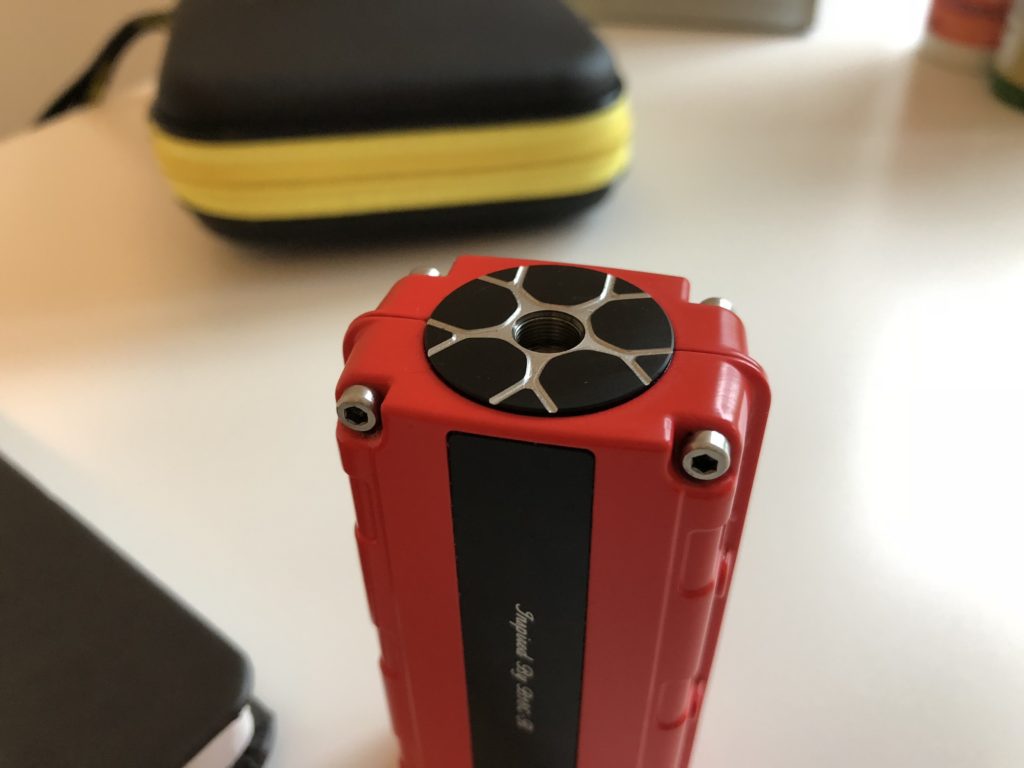 The 510’s Modeled On An Alloy Wheel. Very Cool Effect

I love how smoothly all my attys slip into this thing; the threads are deep and smooth. Perfect, basically.

I also really dig the honeycomb pattern (or alloy wheel-inspired design) AUGVAPE used on the 510 as well.

For me, the design of this mod is flawless. I love it. And I think it looks best in red, though you can get it in white and black too. 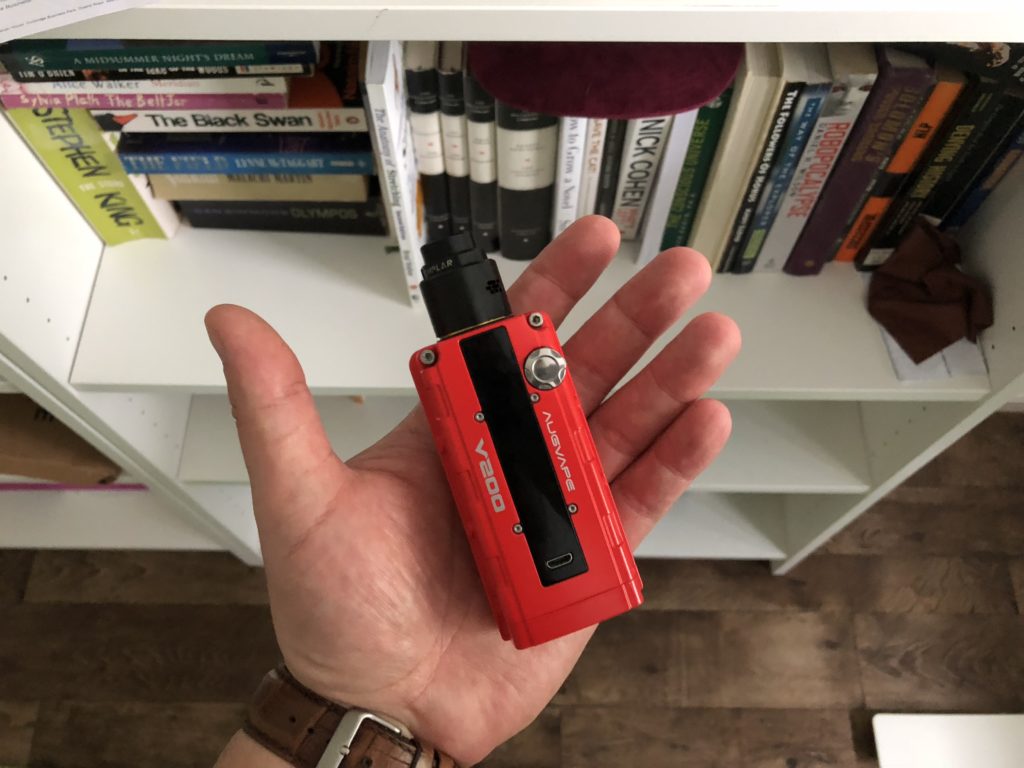 The V200 is Really Compact As Well; I Love The Design of This Mod

As I mentioned, the AUGVAPE V200 is designed for performance. Nothing, save for TC mode, has been left on the table.

The chip inside it is ultra-powerful, delivering power like a Tesla car – everything is 100% available as soon as you hit the power key.

I like the entire philosophy behind this mod. I like that it’s simple, I like that there’s a theme behind it, and I adore the way it looks and vapes.

I got tons of comments from people when I was using it, and I definitely think the Red version is the better-looking of the two. Still, white is very fashionable these days.

And it’s always good to have a choice in this regard.

Here’s a quick rundown of the AUGVAPE V200’s key specs and features:

As you can see above, the AUGVAPE V200 packs in three vaping modes. And all of which are power-mode only.

It’s NO WAY near as complicated (or expensive) as the YiHi SX MINI T-Class.

Normal mode is where I did most of my vaping with the AUGVAPE V200. Why? I didn’t really notice that much difference between normal and V Mode.

AUGVAPE says the V200 will ramp up faster in V Mode. But I could hardly tell the difference. It’s rapid in either mode.

Switch to Bypass Mode and, well… prepare to have your head blown off! 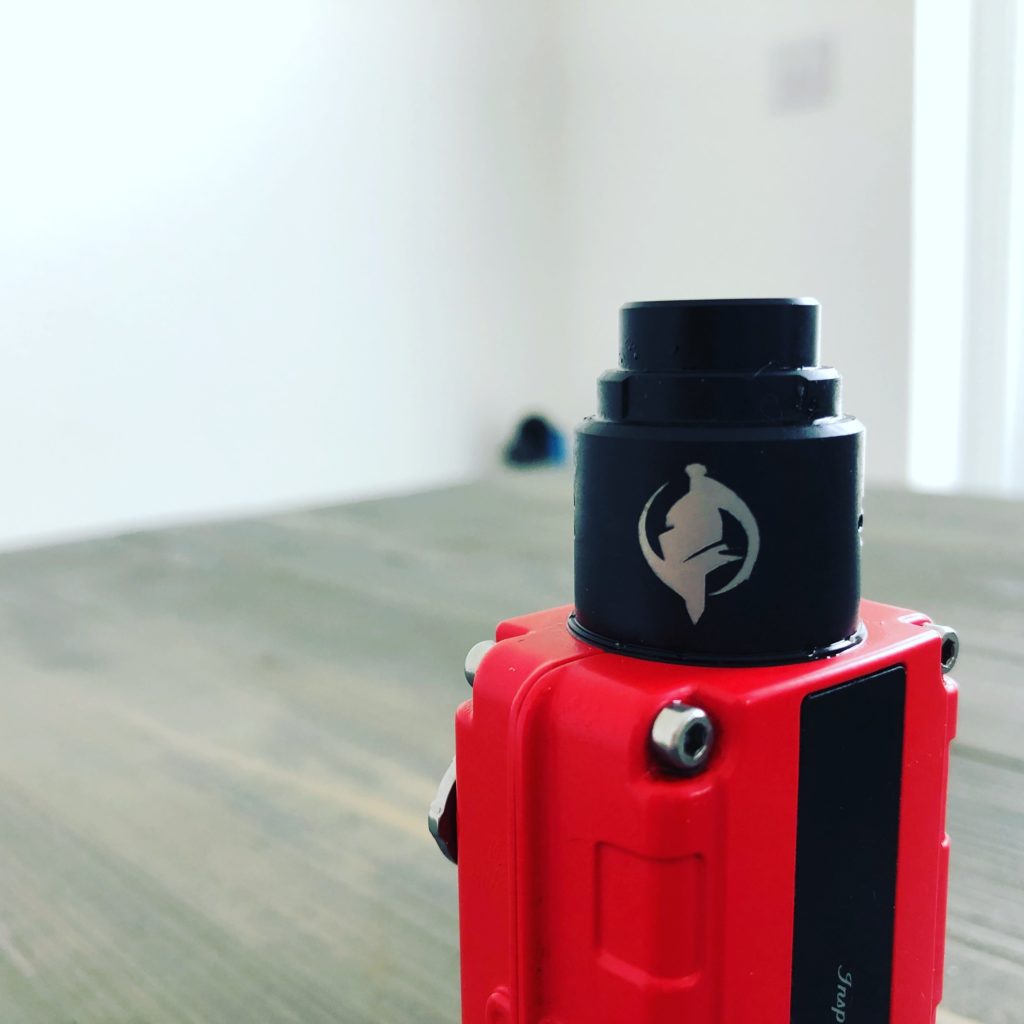 Bypass Mode acts like a nitrous-switch on this thing, ramping up EVERYTHING.

To be honest, it was a bit too much for me. I like a more casual vape. But if you’re after BIG – and I really do mean, BIG – hits then you’re gonna love Bypass Mode.

There is no TC mode, however, so if that’s something you care about, well… you’re gonna have to give this one a miss. Because it ain’t present.

It doesn’t squonk, either.

And this, despite my love for squonk mods, added to my adoration of this device.

It’s OLD SCHOOL. All about power. And it doesn’t care if that bothers you.

This mod is just about vaping in power mode, looking good while doing it, and having TONS of power and chug under the hood.

And the AUGVAPE V200 excels in this respect in almost every regard.

Prior to testing a dual-18650 mod, you always think battery performance is kind of going to be similar across all styles of mods.

But this just isn’t the case. Some mods are A LOT better when it comes to battery efficiencies.

I love SMOANT but its mods are proper thirsty in the battery department. 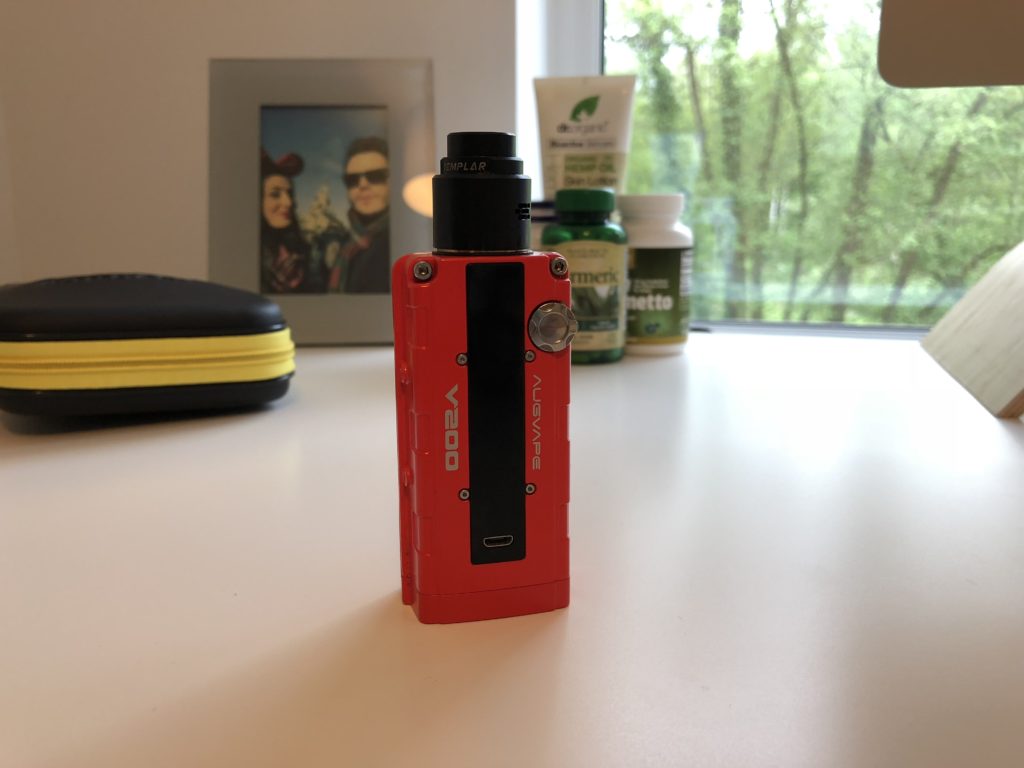 The AUGVAPE V200 is the exact opposite, however – it just sips power.

I’ve been running a couple of 3-month old 18650 cells in the AUGVAPE V200 and its battery performance has been, in a word, exceptional.

How AUGVAPE did this? I have no idea. But it’s likely down to the chip the AUGVAPE V200 uses.

Either way, it’s a bloody big positive, so hats off to AUGVAPE in this regard. 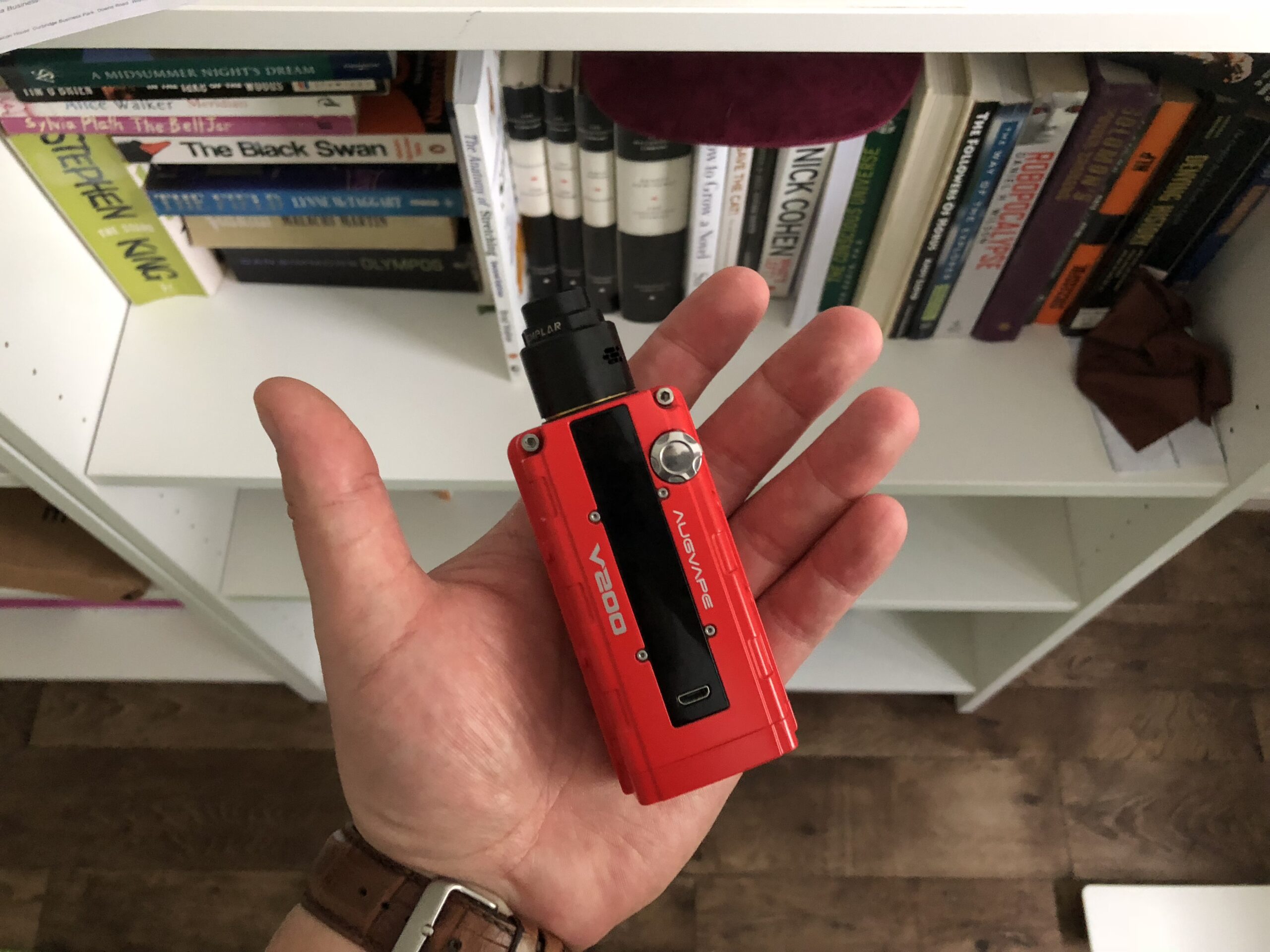