AUGVAPE Templar RDA Review: This is One BADASS RDA

The AUGVAPE Templar RDA is a small, heavy-hitting 22mm RDA tank that is as versatile as it is pretty. I REALLY like it…

The AUGVAPE Templar RDA arrived on my doorstep alongside the AUGVAPE V200 mod.

My review of the mod is coming next week, and today we’re going to be focussing on the AUGVAPE Templar RDA.

This 22mm RDA tank is a very interesting piece of kit for a variety of reasons:

It can also squonk and run in single-coil mode.

Basically, it’s a master of all things RDA.

I just spent a week testing it out.

What follows is my full verdict on the tank, warts and all. 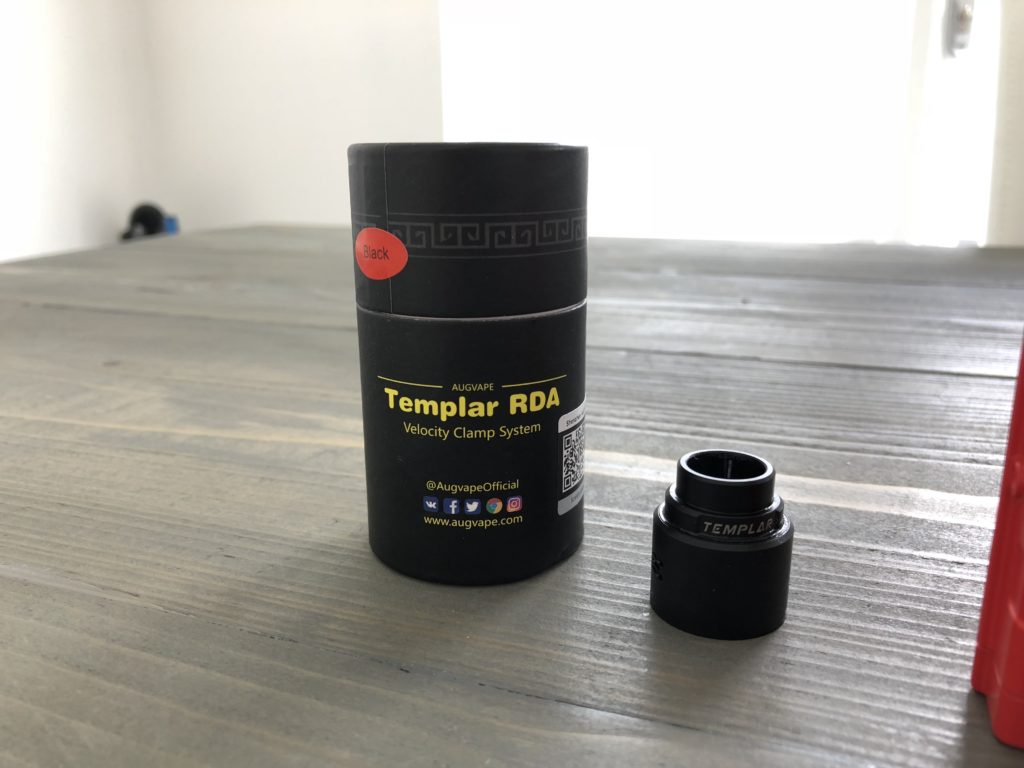 This RDA is very compact and discreet. Way more so than the Bonza RDA and Dead Rabbit RDA.

It’s only 22mm, so compared to the BONZA it kinda feels like a sports car in comparison.

The AUGVAPE Templar RDA sits pretty on all my mods, especially the V200, and looks very premium with its matte black exterior, silver logo, and unique airflow holes.

The overall “feel” of the AUGVAPE Templar RDA is one of robustness; it feels solid and well put together.

The airflow holes are located pretty low, so it will leak if you overfill. 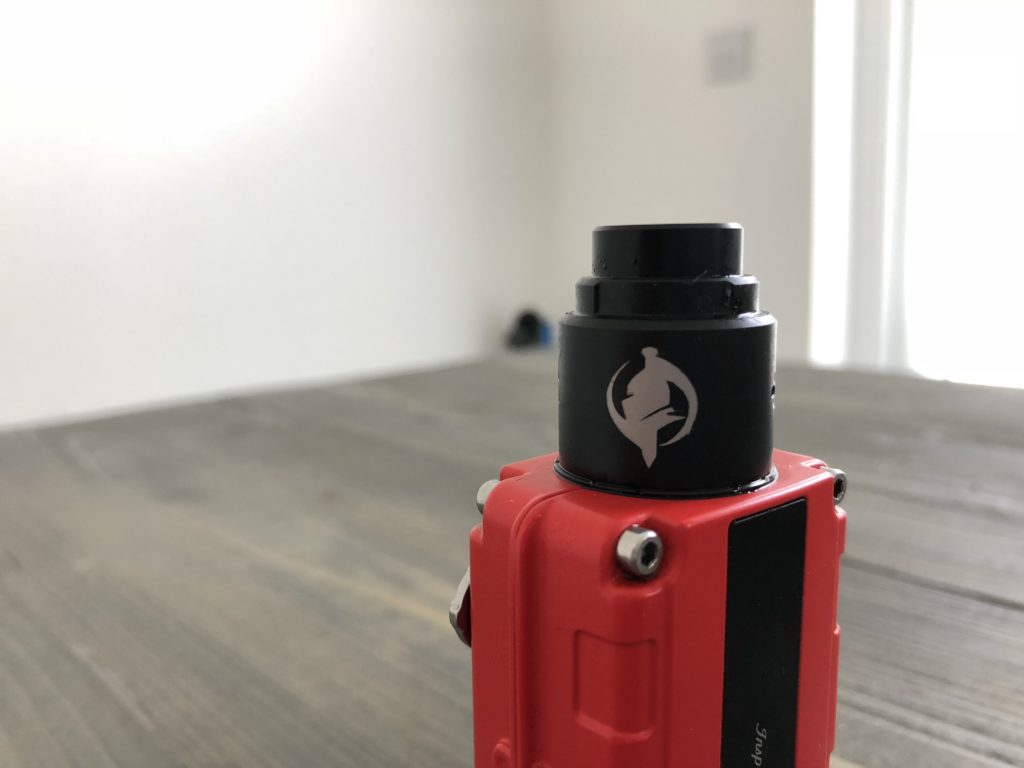 Take the top section off and you will see a jigsaw-style machining along the bottom. This is used to adjust the airflow.

It’s a little fiddly at first, but once you get a feel for the placements you can really switch things up.

You will also need to lube the o-rings as well; the top section is REALLY secured to the bottom half. 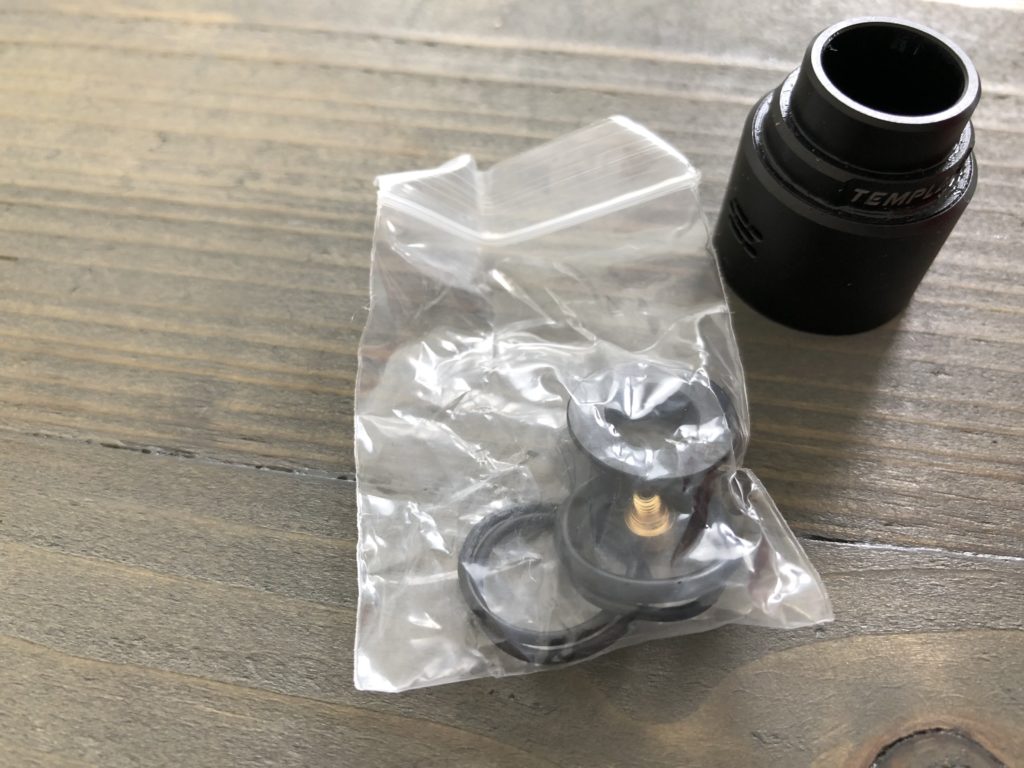 The tank does get a little mucky with use. This is down to its squat dimensions and low airflow positioning.

I tend to keep a tissue with me when using rebuildable atomizer tanks, as leaks can and do happen.

You should probably do the same when using the Templar RDA. 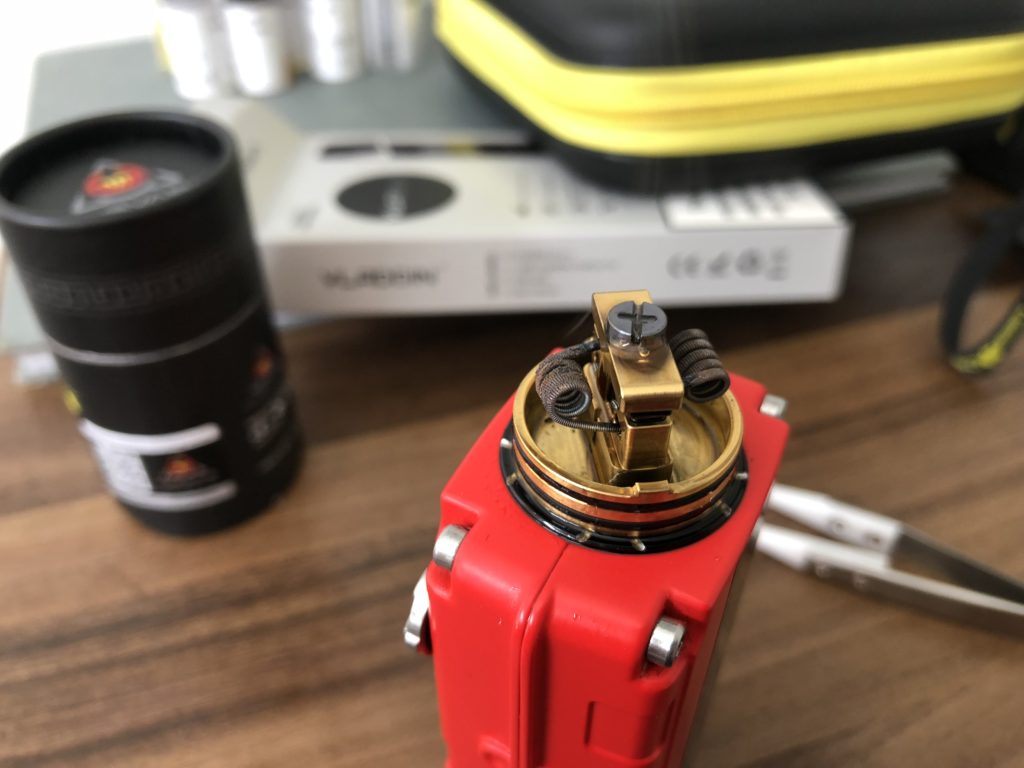 For me, the Templar RDA’s deck is the real star of the show.

It is super-simple to build on. Even for someone that has never used an RDA before.

It uses a velocity style deck, only here there is a single screw to tighten and secure both leads.

Installing coils is a doddle. Seriously, it takes less than 60 seconds to do both.

Once they’re in, you clip the leads and secure them by tightening the screw. 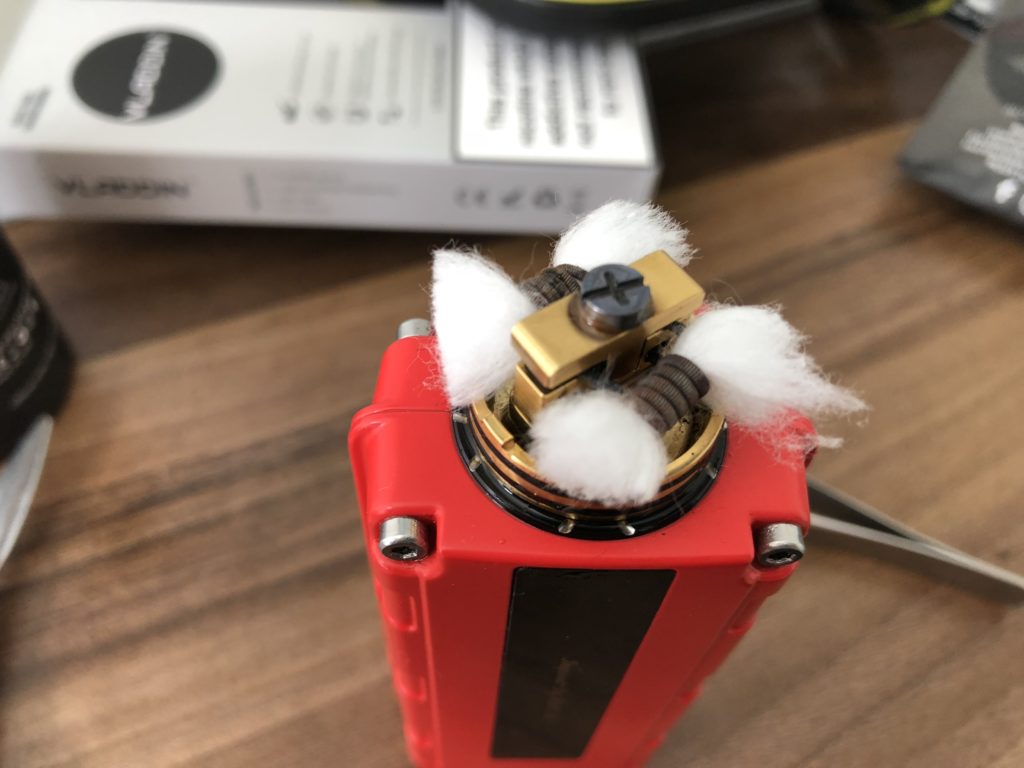 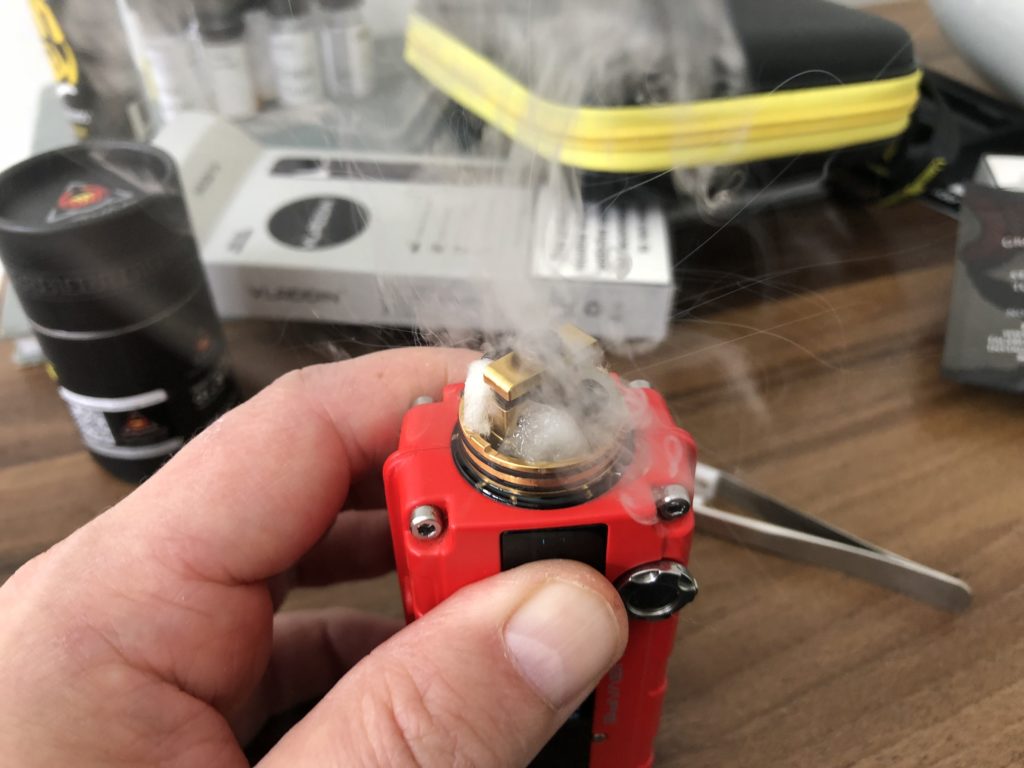 Wick them up, and you’re vaping.

The juice well isn’t particularly big here, way less than the Bonza or Dead Rabbit, but that was always going to be the case with this RDA.

You can – and will – get around 20-30 puffs with decent wicking, however, so in this regard, I don’t really have any complaints.

The ease with which you can set this tank up is a massive USP. The deck, the wicking, the way everything this positioned. It’s just so easy.

And you can fit pretty much any size coils inside it too. I’ve been working my way through the Coil Master Skynet coil pack, which you can check out below:

The Templar is a BIG hitter in the vaping department. I’ve been using it solidly for a couple of weeks now and I am more than impressed.

The flavor is precise and the airflow is very smooth.

There is a slight bit of resistance on the draw too, which only adds to the experience.

The way it vapes reminds me a lot of the Wotofo Lush Plus RDA, and, yes, that is a good thing, because that RDA is one of the best in the business for flavor performance. 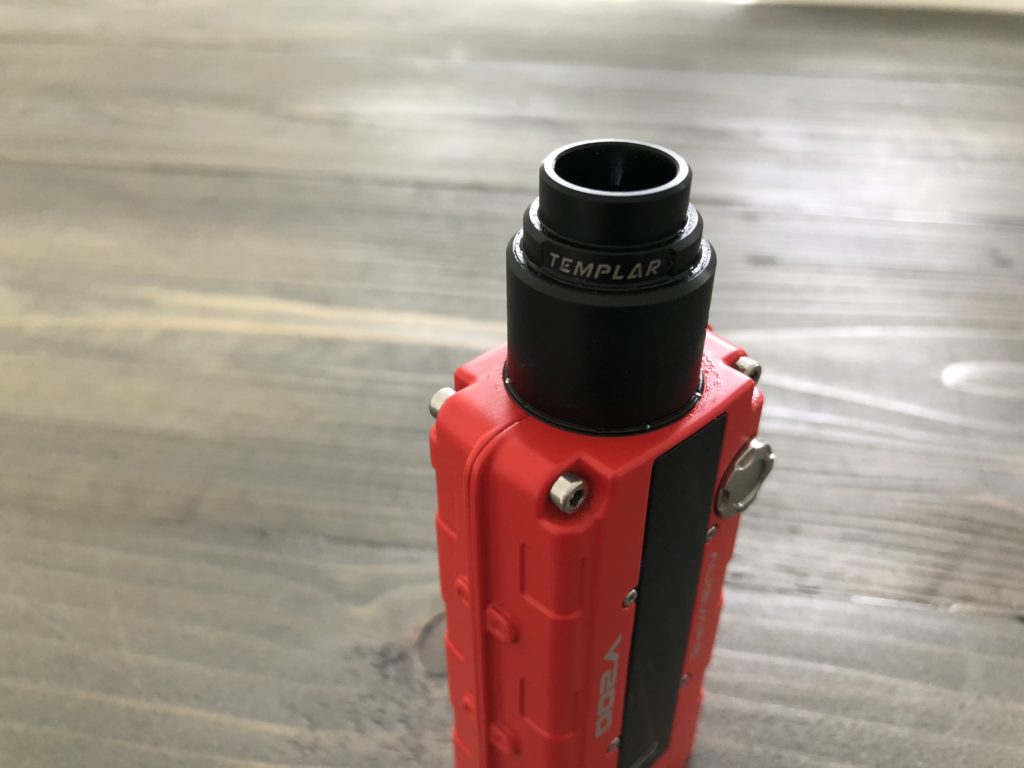 I’ve tested a bunch of RDAs recently, and I have to say the Templar is easily one of my favourites. I actually prefer it to both the Bonza RDA and the Dead Rabbit RDA.

It’s easier to set up, it produces great flavor, and it looks really cool on all styles of mods from box mods to tube mechs.

The airflow is great and it doesn’t spit anywhere near as much as the Dead Rabbit or Bonza. It’s a lot less forgiving when it comes to bad wicking, basically.

And this makes it an ideal choice for newbie vapers.

The AUGVAPE Templar RDA can also do squonking, as any RDA worth it salt should in 2018.

And it does it perfectly fine as well.

My only criticism would be that you can very easily squonk too much vape juice into the chamber, and this creates leaking.

As I noted earlier, the Templar doesn’t have very big juice wells.

So you need to go very lightly when squonking, otherwise, it just gets messy.

You can also run the Templar in single coil mode, though it is 100% better in dual-coil mode.

You can get an MTL vape on it in single coil mode if you dial the airflow down to its tightest setting, but this isn’t something I spent a lot of time doing.

There are better single coil options out there if this is something you want to do.

The Templar RDA is designed to be a dual-coil, heavy hitting RDA and that’s what it WANTS to do.

It can do single coil mode, but it just doesn’t do it all that well. The flavor isn’t as good and the airflow feels weird.

This RDA wants to do things BIG and you should respect that.

Run it in dual-coil mode with a couple of fat coils and you’ll be on cloud nine. Literally.

Just make sure you open some windows if you’re vaping indoors because this thing is a BEAST in that regard.