The BTFC RDA is the latest RDA from Augvape and the Vapnfagan; it’s a dual airflow, dual-coil atomizer that comes with a squonk pin. Is it any good though?

It’s been quite a while since I used a dual coil RDA; I’m mostly rocking single coil RSA tanks these days, as I’m using squonk mods more and more.

The BTFC RDA is designed to be a potent, dual-coil, cloud-thrower.

It has two airflows, one at the top and one at the bottom, and is meant to be used, from what I can gather from Vapnfagan, as a straight-up dripper.

You can use it for squonking, of course, as it comes with a pin.

But Mr. Fagan, in his own words, doesn’t squonk that much and this leads me to believe that this is more of a “traditional”, “dripper” RDA.

As always, I’ll be looking at how it performs in both contexts, as I tend to squonk more these days.

Augvape has released a bunch of excellent hardware this year, most of which I’ve reviewed (see below):

But does the BTFC measure up to the likes of the CSMNT RDA and Hellvape’s Dead Rabbit RDA? 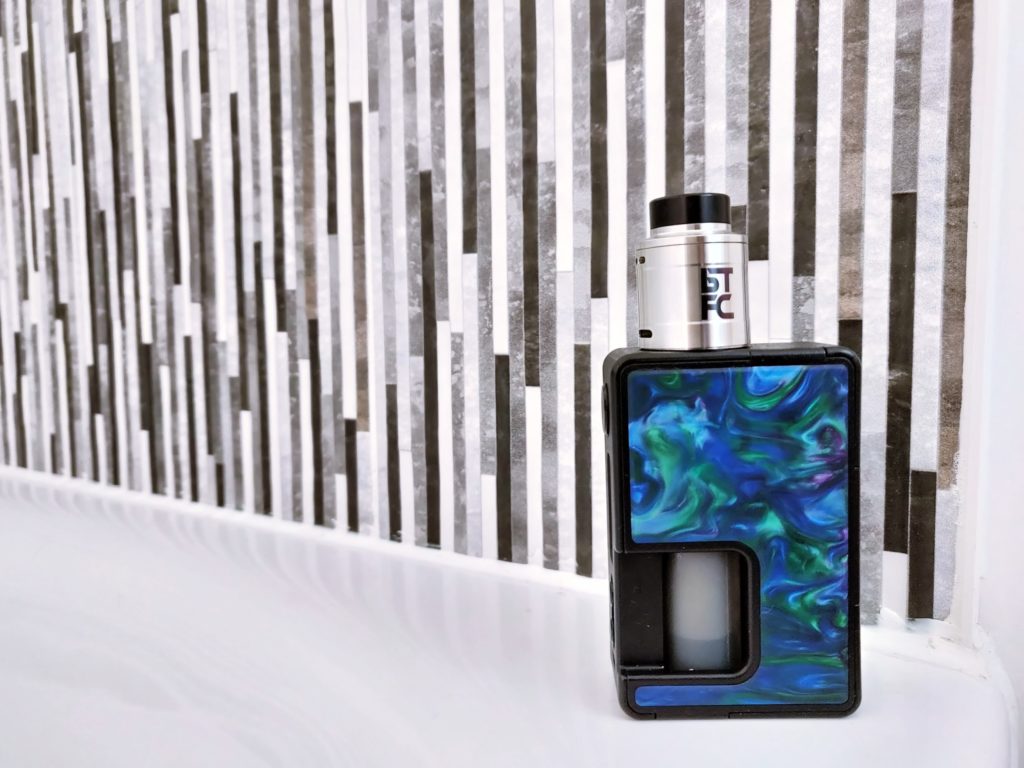 The BTFC RDA Atop The Vandy Vape Pulse 80W Mod

Right off the bat, I can tell you that I like the way this RDA looks.

It’s nicely styled, featuring a 25mm deck, and you get two types of 810 drip tip with it; a stubby one and a long one.

It is a dual-coil deck too, though you can run it in single coil mode, though the flavor and performance do drop off rather a lot – as mentioned earlier, this is more of a “traditional” dripper.

BTFC is daubed on the side in black (my test unit was the silver model) and you have dual airflows at the top and bottom of the tank on both sides. Aesthetically, it’s a tight-looking tank. 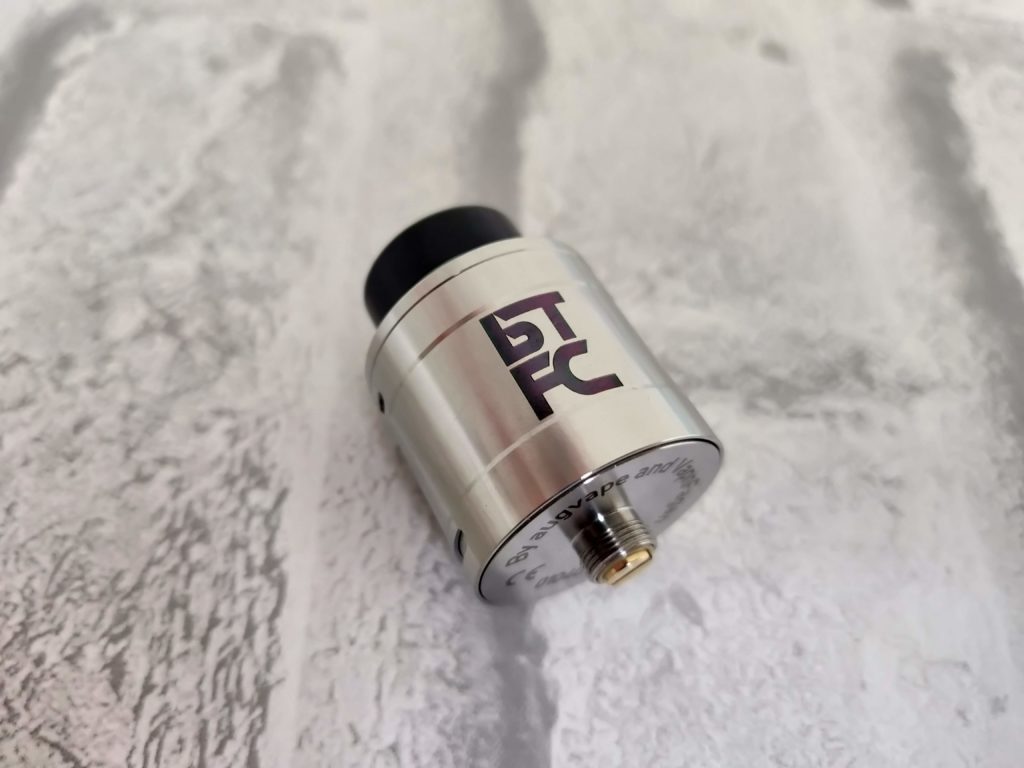 The chassis is made from 304 stainless steel, it comes with a squonk pin (though you have to install it), and there is also a PEEK insulator on the deck itself too.

There are no wonky elements or things that stick out; everything is flush, smooth and well integrated.

Right now, the Augvape’s BTFC is available in black, silver, gunmetal, and rainbow (more color options might surface later, however). 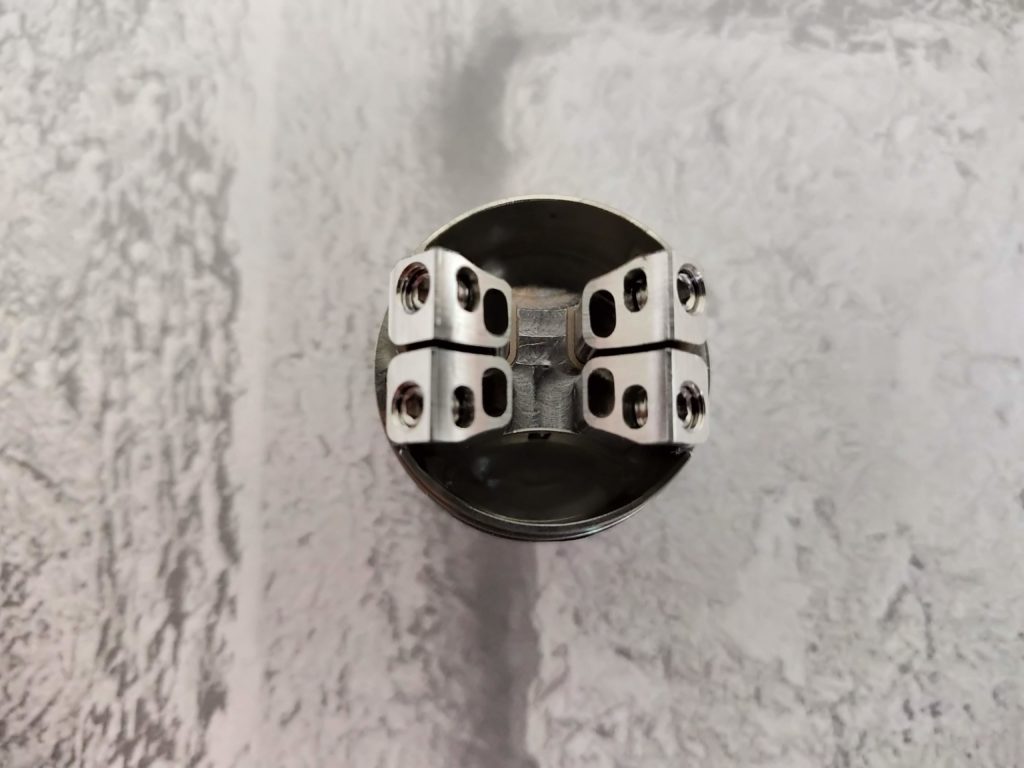 This is where things get interesting. The Vapnfagan designed the BTFC’s deck to be simple to build on. In his own words, “I hate building on complicated decks, only to find, once its done, the flavor is rubbish.:

I have definitely built on simpler decks, but the install process of the coils is not too bad. You have two posts to work with and you’ll need an Allen key to open and secure the screws.

If you pre-clip your leads before install, you’ll want to aim for about 6mm. Do this and they’ll sit snuggly. You can, of course, install and then clip the coils – either method is fairly straight-forward. 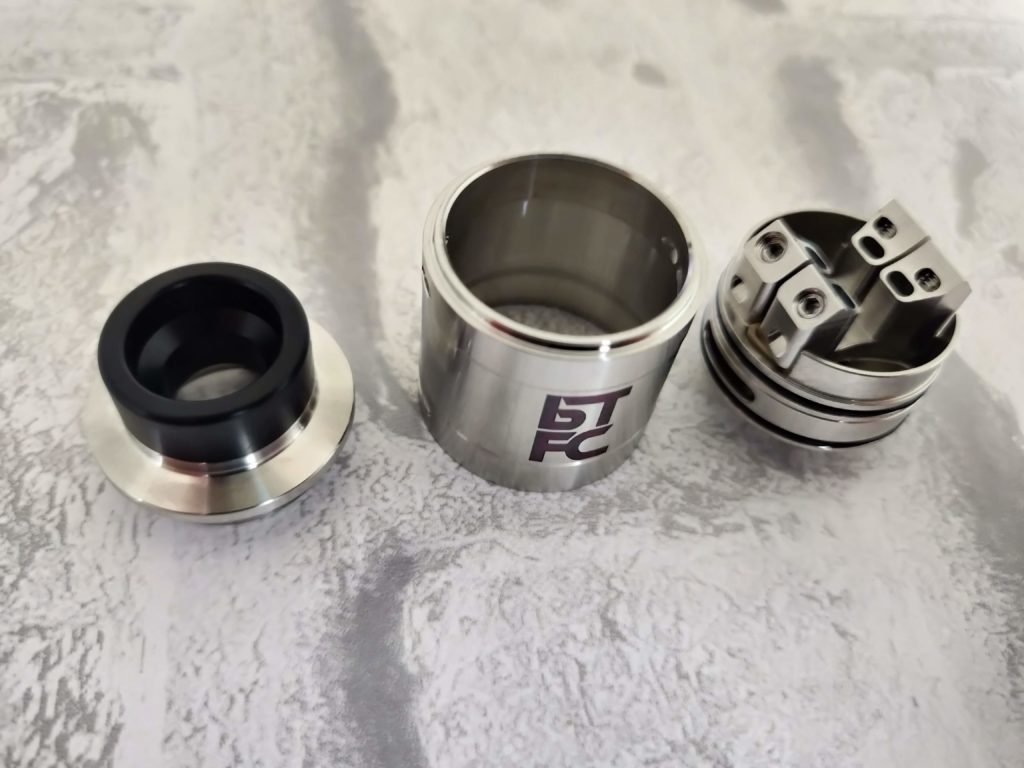 You have a MASSIVE 10ml juice well inside, so even if you don’t use it for squonking you got plenty of space for E Juice. In standard mode, I’ve been getting about 20-30 puffs before it required more juice.

You have plenty of room for the coil install, but you will want to ensure that you don’t use MASSIVE coils, as they’re installed parallel (and you don’t want them touching).

The top cap slides off easily too, which is awesome; I’m so sick of RDAs that have super-stiff top caps. If you’re using them as drippers, it is super annoying when you have to battle to get the top cap off every time.

Here that’s not a problem, everything comes apart really easily.

The airflow system aboard the BTFC is basically the star of the show. You have a total of four airflow slots, two on either side of the deck.

The bottom one is KEY for flavor, and you can one it with one of the two slots closed (top or bottom). 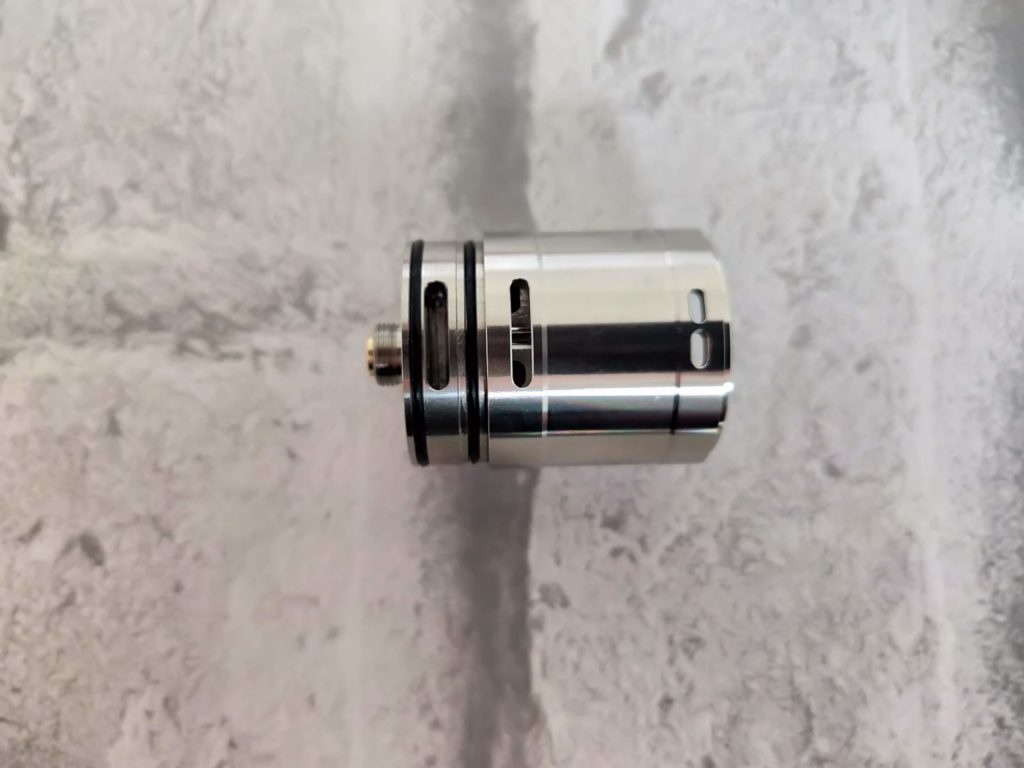 As with the single coil install, it’s not really advised, however. For maximum flavor and clouds, you’ll want both airflows open and in working order. Closing off the top airflow makes the draw slightly hotter and more restricted.

Generally speaking, I didn’t like how it vaped with one airflow closed; it lacked flavor and it got too hot for my liking.

The BTFC is a solid, solid performer. From my first build to the fourth or fifth, it hit consistently and solidly.

The flavor is very precise, akin to some of the best RDAs I’ve used over the years, and this is 100% down to its airflow system which allows for a cool, well-aired vapor production.

There is ZERO spit-back on this RDA as well, something that I tend to get a lot of dual-coil RDAs. But here, there is nothing – just smooth-ass vaping all day long. 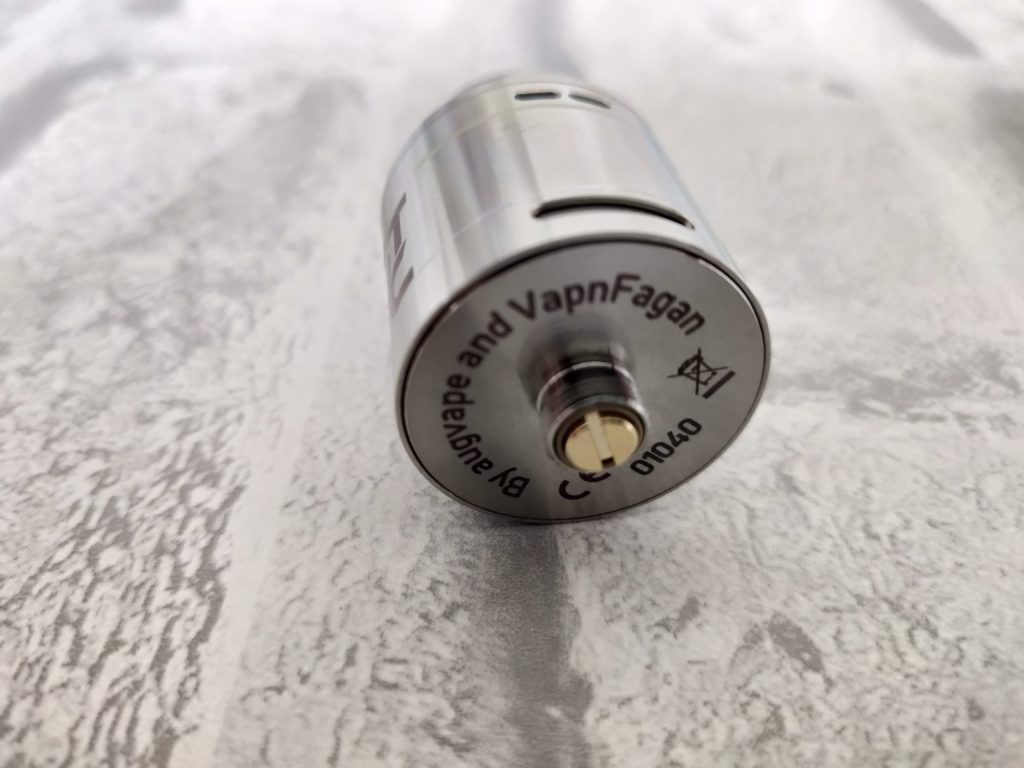 As noted earlier, you can run it in single coil mode but the performance drops off way too much for my liking. This RDA is best when it’s used as intended – as a high-power dripper.

The airflow on the draw is VERY smooth as well; there’s very little turbulence and the vapor is consistent and extremely dense. Run it as intended, and you’ll fog up your living room in no time whatsoever.

When it comes to squonking, the BTFC is a bit of a weird one. Yes, it squonks perfectly well. And because you have such a MASSIVE juice well, it’s kind of impossible to over-squonk.

However, you will 100% need a dual-18650 squonk in order to run it properly. Why? Simple: it’s a dual coil RDA and it requires quite a bit of power to function optimally (75-80W minimum).

Running an RDA at this power setting on a single cell squonk mod, I tested it on the Vandy Vape Pulse 80W mod, will destroy the battery in a matter of hours – like less than four with heavy vaping.

For this reason, I’d say, unless you’re running a squonk mod like Ohm Boy’s RAGE squonker, the BTFC RDA is best used as a traditional dripper.

I hate running out of battery life in the space of a few short hours; it’s not practical and you will get caught short when out and about. And that sucks.

If you have a dual-cell squonk mod, you’re good to go – the two will go perfectly together. Ditto if you’re running it without the squonk pin on a standard, non-squonk mod.

Bottomline: the BTFC RDA is a power-hungry tank, so you’ll need a mod that can handle it. A single cell squonker simply won’t cut the mustard, unless you don’t mind carrying around three spare batteries with you.

Verdict – How Good is The BTFC RDA?

I really like the BTFC RDA; it’s a solid, high-performance RDA that kicks out a TON of flavor and clouds.

The deck is simple enough to build on and the tank is constructed beautifully.

The fact it also doubles as a BF Squonk RDA is a definite plus, though you will 100% want to run it on a dual-18650 mod if you go this route.

Bottomline: if you’re after a well-priced, high-performance dripper that can also squonk, the BTFC RDA comes highly recommended.

I had a blast testing this tank out, and I think you guys will really dig it too!

And best of all, the BTFC RDA retails for just $29.99, making it one of the best value RDAs around right now. 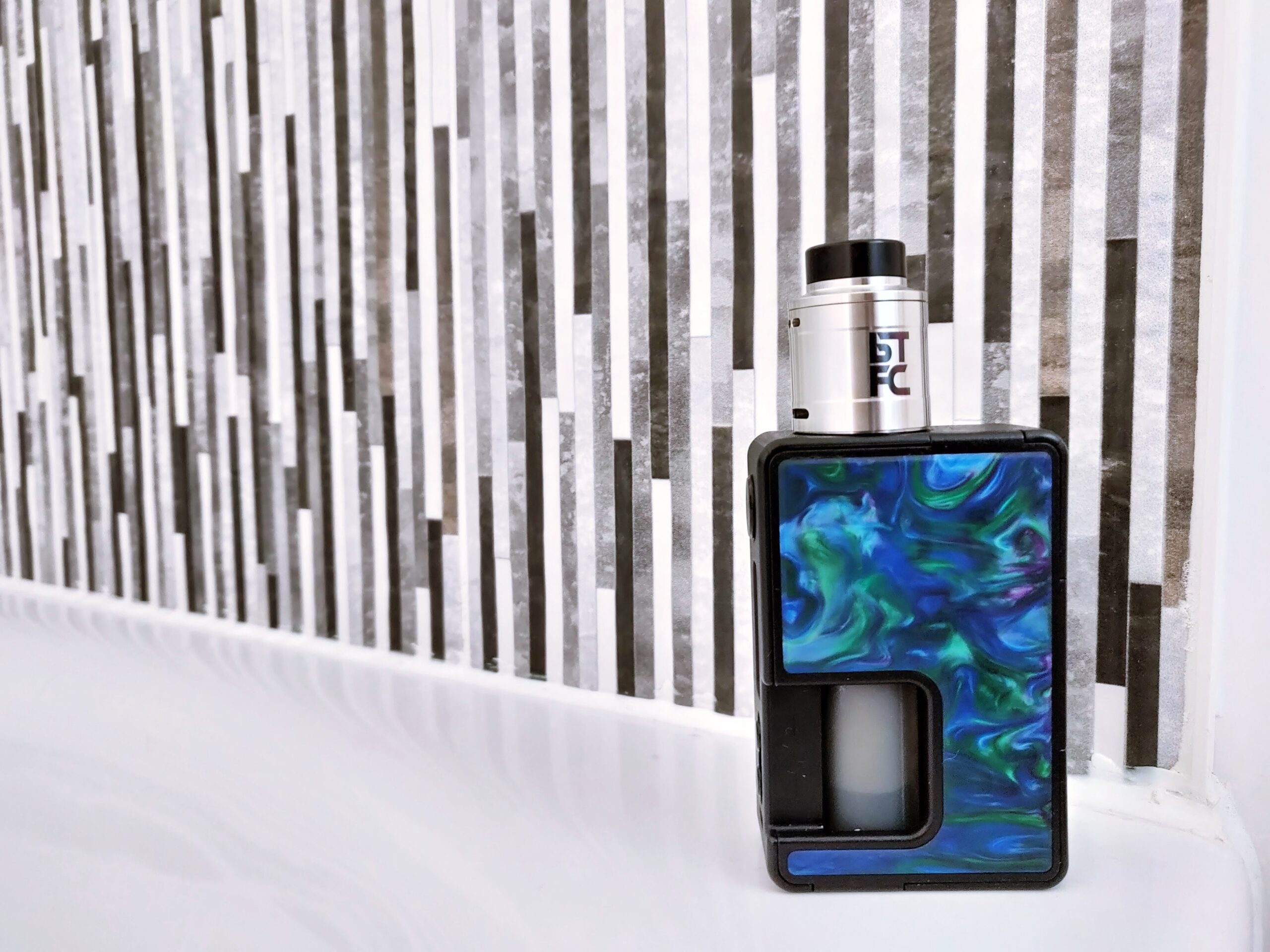