There are a few RTA tanks around that claim to be leak-proof, and the AUGVAPE Intake RTA has just joined the fray – but is it any good?

The biggest thing about RTA tanks that puts people off is that they leak – or they’re fiddly to wick. Or, sometimes… BOTH!

There are definitely a few beginner-friendly options around right now, and the AUGVAPE Intake RTA, with its unique airflow system, is yet another option.

This tank, like a couple on the market right now, claims to be 100% leak-proof, so even the n00biest of n00bs can work and live with it.

So how does it stack up in reality? Let’s bloody well find out, shall we? 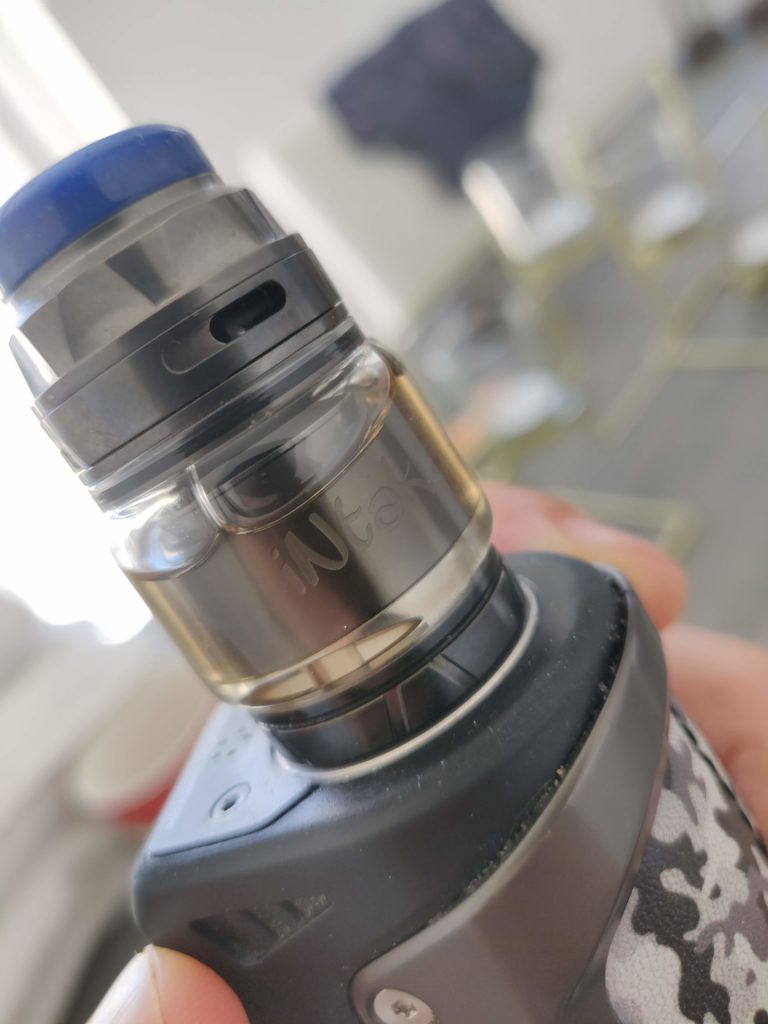 Fully Loaded On Top of The GeekVape AEGIS Mod

The Intake RTA is certainly a handsome chap. The bulging glass tank, the knurled effect around the drip tip, and the blue resin drip tip all make for an aesthetically pleasing tank.

As soon as I unboxed it, I knew I liked it. It just has “that” look about it – Vandy Vape is good at achieving this kind of thing. And so too is AUGVAPE it seems.

It’s a big boy, though. Chunky, solid, robust – and it’s also a single coil RTA which I found kind of bizarre. Normally, single coil RTAs are a little more svelte and slimmed down. 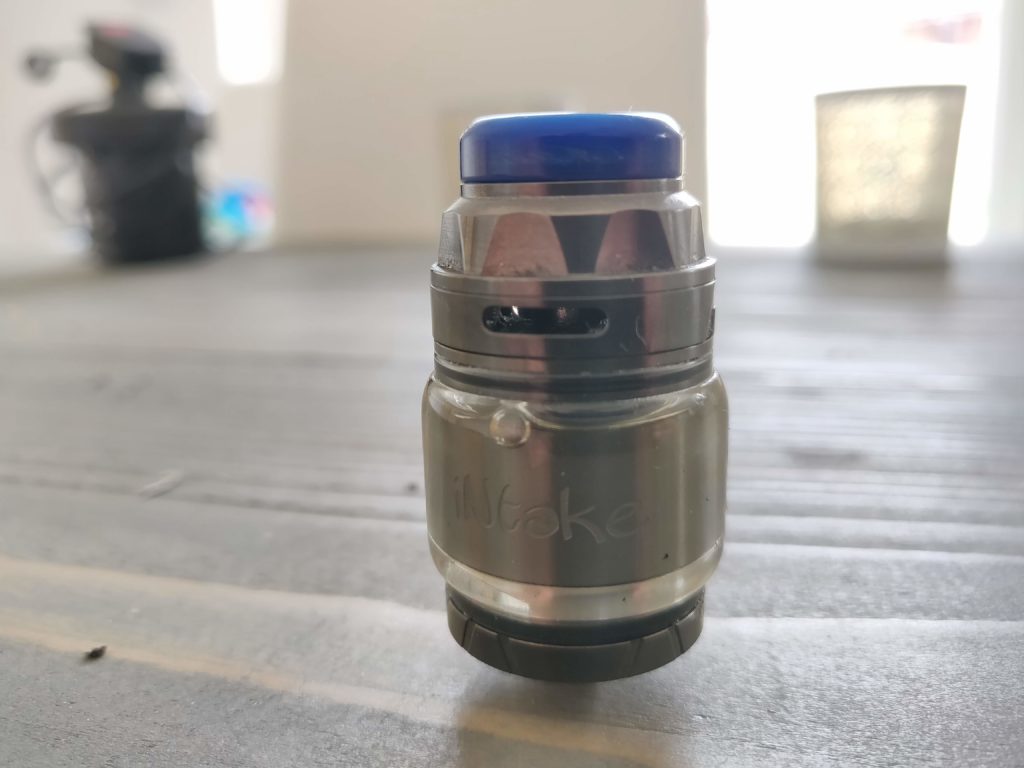 The Top-Mounted Airflow (Which Links Up With The Internal Tubes)

Not that this is a bad thing. I like my tanks with a bit of muscle, and the AUGVAPE Intake RTA has it in spades.

But what makes the AUGVAPE Intake RTA so unique in the RTA space is its airflow, which is placed at the top.

This is why it NEVER leaks. It literally CANNOT leak!

This is a clever move, and I expect to see A LOT more RTA tanks using a similar system in the coming months.

All you have to do when setting it up is ensure the airflow posts, these are found inside the tank, are lined up. That’s literally it. Bang the coil in, wick it, and you’re good to go. 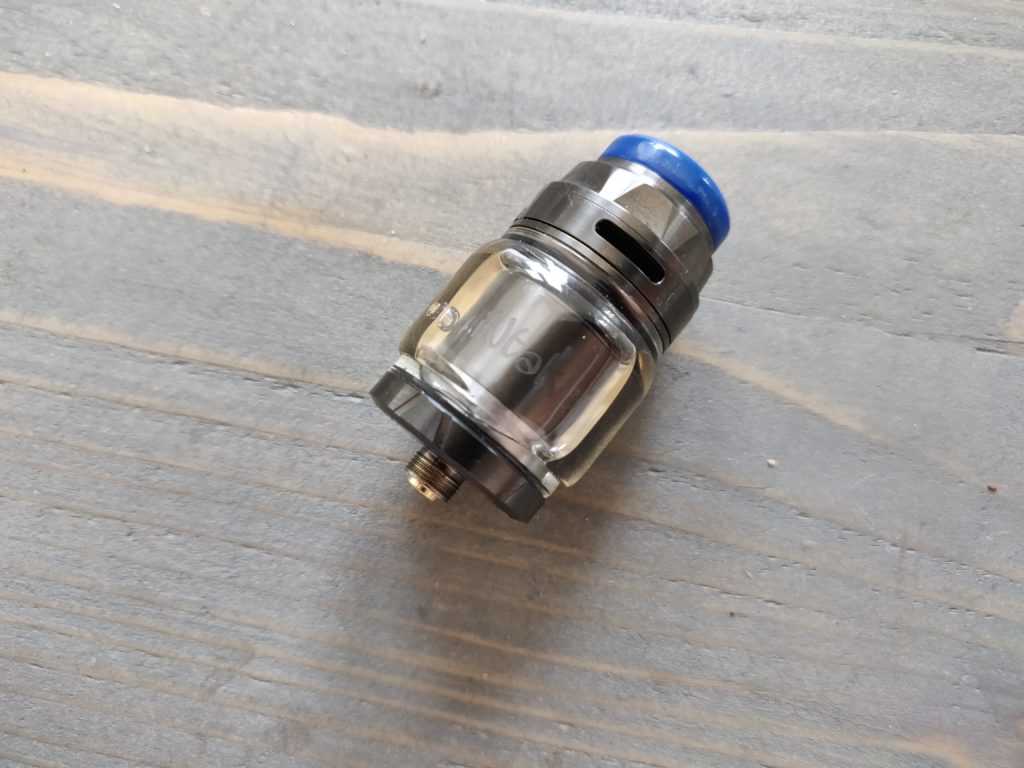 The airflow control is located just below the drip tip. You can have it wide open, partially closed, or whatever suits your style best. Personally, I prefer it wide open.

To refill with E Juice, simply turn the top cap counter-clockwise and it pops off, revealing large(ish) kidney-shaped fill ports.

All told, this RTA is INSANELY easy to set up and live with.

This is a single coil RTA, and that means you can run it pretty economically without degrading the flavor or performance.

During my stint with this vape tank, I’ve been running it in and around 45W to 60W, and it seems perfectly happy at either increment.

Setting the coil is also really simple on this deck too; you gave two Philips screws that secure it in place, and lining it up with the airflow is as easy as can be. 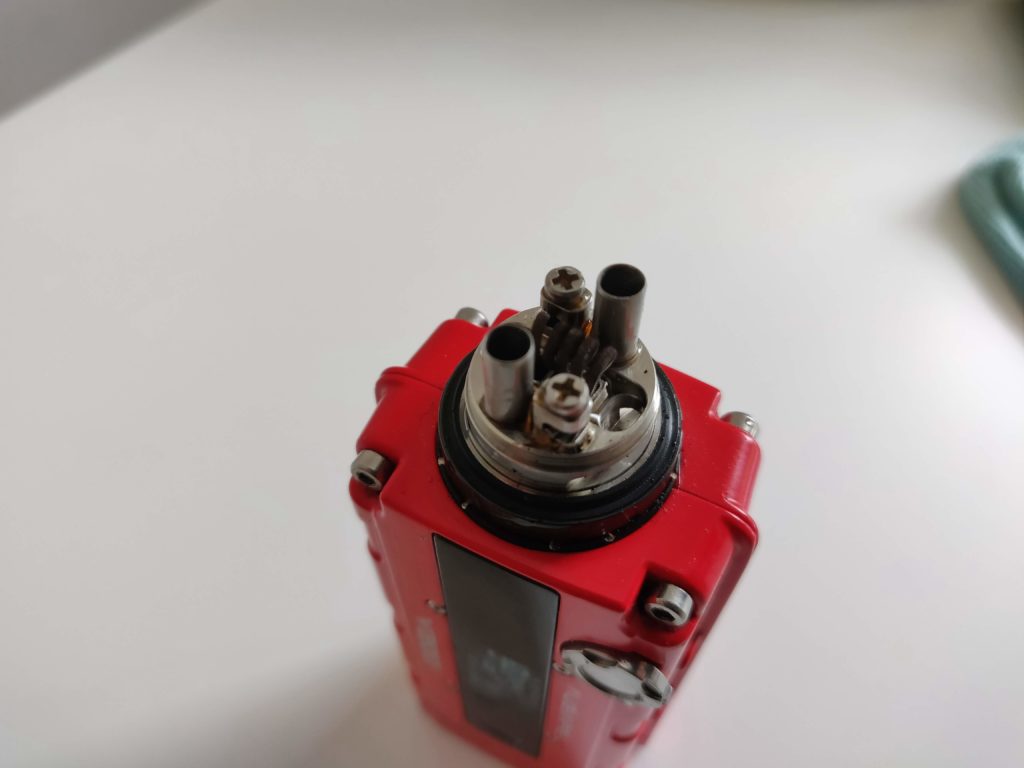 The Deck And Those Unique Airflow Tubes

This, for me, is what makes the AUGVAPE Intake RTA so special. It’s been made with new users in mind, those that might not be used to an RTA or rebuildable deck.

And it has done ALL it can to make it as painless as possible.

The airflow system is also kinda unique too; the tubes circulate the airflow to the bottom of the tank and onto the coil, and you also have that side airflow at the top as well.

This is partly why you do not get any leaking, as there are no exposed airflow ports at the base of the device. The tubes do all the internal airflow work.

The machining and connections are all very much on point too; everything connects and comes apart in a buttery smooth fashion. 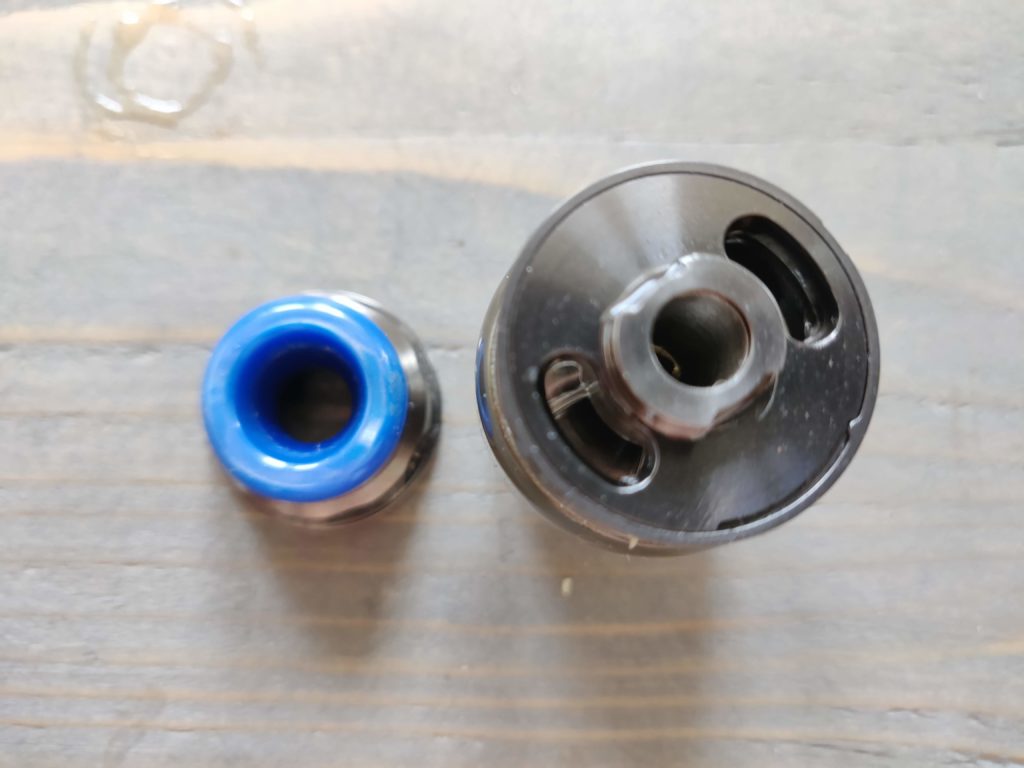 There are no stiff components or wonky screws. Once everything’s set, the tank fits together perfectly and feels incredibly secure.

I’m a huge fan of single coil RTA tanks, as they use less power yet still provide great flavor and clouds. The AUGVAPE Intake RTA is no exception to this rule.

Chuck in ZERO leaking and AUGVAPE could well have a winner on its hands here.

So how’s the overall performance?

The one thing I’m not 100% loving about the Intake RTA is the airflow; it’s kinda restricted even when wide open.

I don’t mind restricted airflow at all, but I like having the option to rock out with my airflow wide open when the mood takes me.

This is an entirely subjective point, however, as what I like will almost certainly be completely different to what you do.

The tank runs smoothly though, really smooth, and it’s super quiet as well. Flavor is decent too. Not the greatest. But definitely well above par. 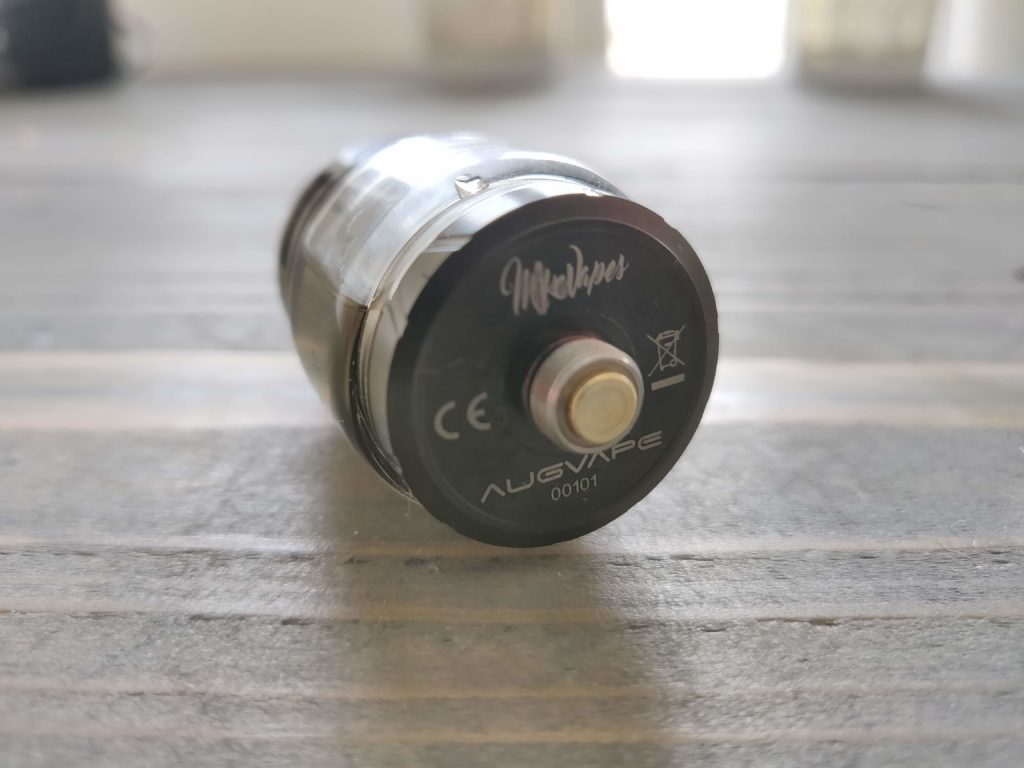 It’s just not quite as precise as I’d like it to be. RTAs, for the most part, are big hitters in the flavor department. But the Intake feels more like a decent sub ohm tank, with respect to flavor.

The big idea here is simple: it’s an RTA that doesn’t leak. This is big, as it means new users can pick on up and use it right off the bat with no hassle.

And I think this is the entire point of the AUGVAPE Intake RTA. Simplicity. But this simplicity comes at a cost: and that cost is flavor – it’s just not quite as good as some RTAs around right now.

And this is 100% down to the airflow system that is used in it.

I do like this tank a lot. I’ve had a blast testing it. It does A LOT of things right – especially the zero leaking thing.

It is definitely a great option for anyone looking at dipping their toes into the world of RTA tanks.

This is why we included it inside our Best RTA Tank Guide – it’s simple and easy to use. And for an RTA, that is always awesome

I just think an experienced RTA user will feel a little short-changed in the flavor department.

For anyone coming from a sub-ohm tank, however, the AUGVAPE Intake RTA is definitely worth a look.

It’s simple to use and performs solidly in almost every regard.

Check out ALL the color options for this tank over at VaporDNA (Best Price: $29.99).