The VooPoo Drag is a fantastic mod. One of the best ever created. But is it actually better than the newer, more expensive VooPoo Drag 2? The answer might surprise you…

Why The VooPoo Drag is Better:

This might be a controversial point, but I would 100% recommend the older VooPoo Drag over the newer, more expensive VooPoo Drag 2.

You also have the VooPoo Drag 3 to consider now too, and that mod is actually very good – so this is definitely worth thinking about before you pull the trigger on a new VooPoo mod.

Why? Simple: it looks better, it’s more solidly made with fewer rattles and creaks, and it is A LOT cheaper to buy. For this reason, I believe it is a vastly superior option to the newer model.

Both are decent mods, but the original Drag, for me, has a better design. It’s way more robust and it doesn’t have any weak elements in its design language. The new VooPoo Drag 2 isn’t as well put together; the battery door, for instance, rattles way too much.

And my original VooPoo Drag is now about 18 months old. It still works great, and while it is a little battered, it is still one of my all-time favorite vape mods. The VooPoo Drag 2, by contrast, mainly sits in my cupboard collecting dust…

My advice? Get the VooPoo Drag 157W; it’s cheaper, it looks better, and it is far more robust than its successor.

Beauty is subjective. But for my money, I think the original VooPoo Drag is far better looking than the newer, more costly VooPoo Drag 2. I prefer its styling, how it’s put together, and the way it feels in my hand.

The VooPoo Drag 2 has a super-annoying rattle on its battery door that cannot be fixed. Beyond this, the overall design language of the Drag 2 just isn’t anywhere near as exciting as the original resin VooPoo Drag.

The Drag 2 is 25% lighter than the original, and that’s cool. But what it saves in weight, it lacks in quality. I’d take a slightly heavier mod with solid, reliable construction over a lighter, rattly mod any day of the week.

Button placement remains pretty similar on both mods. This is a good thing. It’s good that the newer mod feels familiar. However, that’s where the similarities end. Once renowned for its robustness, the newer Drag 2 feels a lot less robust and solid in the hand.

The Drag 2 is also smaller than the original Drag too. Exact dimensions for both mods are as follows:

I do like the look of both, neither are ugly mods, but I do honestly believe the original Drag is a superior device in terms of build quality. There are no rattles, no weak elements in the design. Given a choice, I’d 100% get the Drag Mini over the Drag 2.

If you’re in the market for a new mod, and you want a VooPoo mod, I’d definitely advise that you go with the original VooPoo Drag. The reason for this, as noted above, is threefold:

The Drag 2 can kick out 177W, while the Drag can only muster 157W, but, again, this isn’t something I’d consider a deal breaker – not when I hardly ever go above 90W most of the time.

As noted above, the Drag 2 does have more power (177W vs 157W) but this isn’t something I’d consider a deal-breaker. More power doesn’t mean something is better, especially when most vapers never go above 90W…

The Gene Fit, like the original GENE chip, is very good. It hits hard and fast. It also features support for Temp Control vaping and Bypass Mode. All modes work great, so I don’t really have any complaints in this regard. Both are extremely solid performers.

However, even with all this extra power and a newer generation chipset, the difference in terms of real-world use is negligible. I cannot tell the difference between my Drag and Drag 2, for instance – both hit hard and fast and telling the two apart is essentially impossible.

The GENE Fit does have more vaping modes, things like Flavor Set, Cloud Set, and Battery Set but I don’t tend to use things like this anyway, so for me it doesn’t really matter. It’s nice to face features, but when they don’t really add anything significant they’re basically no better than marketing gimmicks…

Bottomline? Where it counts the two mods are very similar. Performance is brilliant on both. However, with the VooPoo Drag 2 you’ll pay more for a product that isn’t as well designed as its predecessor. And that’s just kind of stupid…

You probably already know the answer to this, but in case you skipped to the end, let’s recap:

Given all of the above, I’d 100% recommend you go with the original VooPoo Drag over the newer, more expensive VooPoo Drag 2. I own both, as well as the VooPoo Drag Mini, and I use the original way more than the Drag 2 for the simple reason that its design is more solid and doesn’t rattle in my hand and pocket.

I prefer the Drag Mini to the Drag 2. That mod has an integral 4300mAh battery and, like the original VooPoo Drag, is infinitely better put together than the 18650-toting VooPoo Drag 2 with zero rattles and creaks. It is still more expensive than the VooPoo Drag though…

Bottomline? The VooPoo Drag mod (at just $47.99) offers up unprecedented value for money, power, and impressive design for A LOT less money than VooPoo’s newer generation.

If you’re smart, you’ll ignore the marketing and go with the true and tested king of affordable, power-user vape mods, the VooPoo Drag 157W. 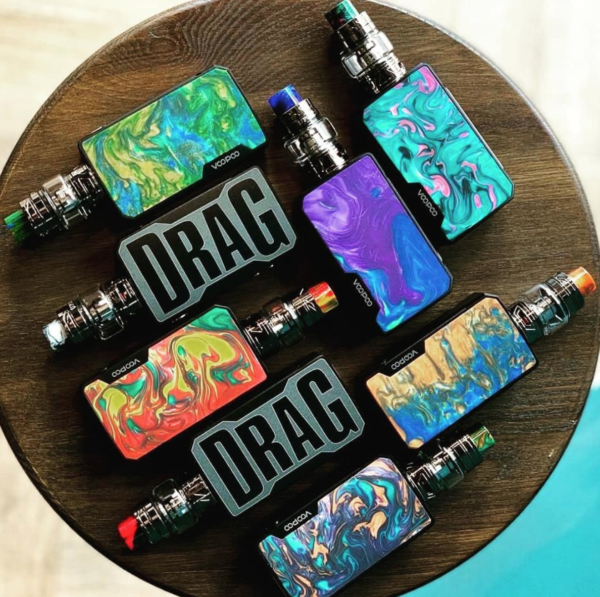