Black Market JUUL Pods filled with THC are responsible for all of the “vaping related deaths” you’ve heard about – it has NOTHING to do with normal, standard vapes and pod devices…

America is addicted to Big Tobacco money. This is a fact. And The US government has been on Big Tobacco’s teat for decades now, thanks to something called the Master Settlement Agreement.

Not heard of the Master Settlement Agreement? It’s basically a profit-sharing scheme between the US government, its states, and the US’ Big Tobacco companies, whereby a portion of Big Tobacco’s profits are shared with the government each year.

RELATED: JUUL vs RELX: Which is The Best Vape?

In this respect, the US government and its states are actively indebted to Big Tobacco. They need that money, some states even borrow money against it. Others use it to fund tobacco production. Either way, the Master Settlement Agreement is something that more people should know about.

Does Vaping Kill You? No, Black Market JUUL Pods Do!

No, vaping does not kill you. Using illegal, home-made carts or JUUL pods filled with THC does though, apparently. And this recent slew of “vaping related deaths” are all linked to the illegal use of black-market THC pods. The MSM, however, would have you believe that it is just normal vapers that are keeling over and dying.

But this is not the case. This isn’t what’s happening. Even the CDC has backtracked on these claims, updating the advice on its site.

Dr. Ileana Arias, senior scientific advisor and acting deputy director for non-infectious diseases at CDC, told Rolling Stone that the majority of cases were linked to THC carts and/or pods, not traditional ecigs or vape devices.

Similarly, on August 12 a bunch of people were admitted to hospitals in Kings County, California, with similar lung issues. 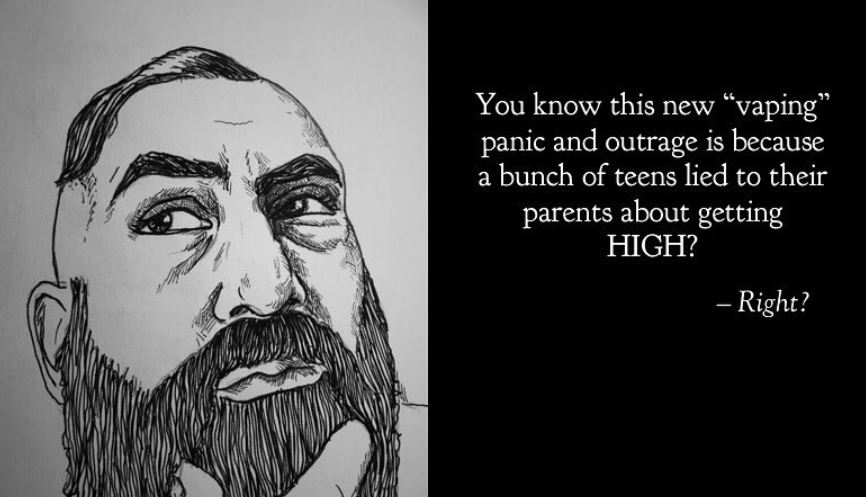 And guess what? All of them had been using THC pods and/or vapes that had been purchased off the black market. It WAS NOT an RDA or a vape tank that did this, it was the liquid inside the cart – a liquid made illegally with no concern for public health. And the worst part? Because it was made and distributed on the black market, it’s next to impossible to track the source of these killer THC pods.

“If inhaled, oils like Vitamin E can cause lipoid pneumonitis, a rare condition that results from fat particles being inhaled into the lungs,” according to Melodi Pirzada, chief of pediatric pulmonology.

Why Is Vaping Being Blamed?

Simple: there’s a thing called a consensus fallacy. The Nazi party used it a lot to do their evil work. How it works is simple: you create a lie, you push it hard, you make sure everybody hears about it all the time. Do this for long enough, in a culture where people STILL trust the media, and you have yourself a fact that is accepted and passed around by “citizens” as gospel, despite the fact it is not the truth.

And this is exactly what has happened here; the MSM is blaming vaping for these deaths, ignoring the fact that it was black market drugs that were responsible, with a view to destroying one of the biggest public health revolutions of the last 100 years.

The goal in the US, as always, is simple: get rid of vaping – the US government can’t make money from it, so it doesn’t want it operating on its turf, interfering with its Master Settlement money.

This is the real reason why vaping is being made the fall guy for these THC pod deaths. Like any national event, the ends justify the means: people have died, it was this thing’s fault, and now we’re going to destroy it. Don’t worry about the facts, just trust us, we’re your government, go back to sleep. Rinse, wash, and repeat. And then you got yourself a nice little systematic take-down of an entire industry.

And Then There’s JUUL…

The more I hear from JUUL, the less I like the company. Not only is JUUL now owned by a big tobacco company, Altria, if you’re wondering, but it is almost starting to seem like the company is being used as a trojan horse to destroy the entire vaping industry. Every major anti-vaping story mentions JUUL. Every single one of them. And JUUL never makes a stand; it just bows to whatever accusation is leveled at it which makes no sense for a corporation intent on making money.

I mean, in the UK, vaping has been studied extensively by the Royal College of Physicians and Public Health England. Both agree that vaping is 95% safer than smoking. Why isn’t JUUL leveraging this science to bolster itself in a country that is constantly attacking it? Sure, the US is packed with anti-vaping groups, but if you have the science you have the science – no one can argue with data.

This is why the UK has vape shops in hospitals and pharmacies. It knows that vaping is the #1 tool for killing smoking within a generation. This is why the NHS, Public Health England, and a host of other public bodies actively support vaping in the UK. They’re doing it because they KNOW vaping is safer than smoking – and not just by a little, either. By over 95%!

Why is this not the case in the USA? Science doesn’t change once you’ve traveled over the Atlantic, does it? And more to the point: why aren’t US vape companies using this wealth of knowledge to help change the messaging and consensus fallacy around vaping in the USA? I mean, the Royal College of Physicians has been around since before America was even founded as a country! You’d think they probably know what they’re talking about.

But then again, over in the UK, the government isn’t actively involved in profit-sharing schemes with Big Tobacco companies…