The Wotofo Profile RDA landed in 2018 and proved very popular. For this reason, Wotofo has decided to bring its mesh coil idea to an RTA which goes by the name of Wotofo Profile Unity RTA.

I literally just unboxed and set this tank up, so this is very much a preview. Why so fast? Because the Profile Unity RTA is a pretty unique RTA. In addition, I think a fair few of you might be interested in how it works (regarding wicking and building) right out the box.

As far as I’m aware, it is the only mesh coil RTA you can buy right now. I could be wrong, of course, but I don’t recall ever hearing of and/or using a mesh coil RTA before, so, yeah… it’s pretty unique!

I really, really liked the Profile RDA. It was different, it vaped great, and it was relatively easy to set up. For this reason, I was pretty excited when I heard about the Wotofo Profile Unity RTA.

But, knowing RTAs, I did have my reservations. RTAs are tricky to wick at the best of times. Chuck in some mesh coil and, well, things could get dramatically more problematic. More on this later though…

In terms of overall design and finish, the Wotofo Profile Unity RTA is a very handsome chap. 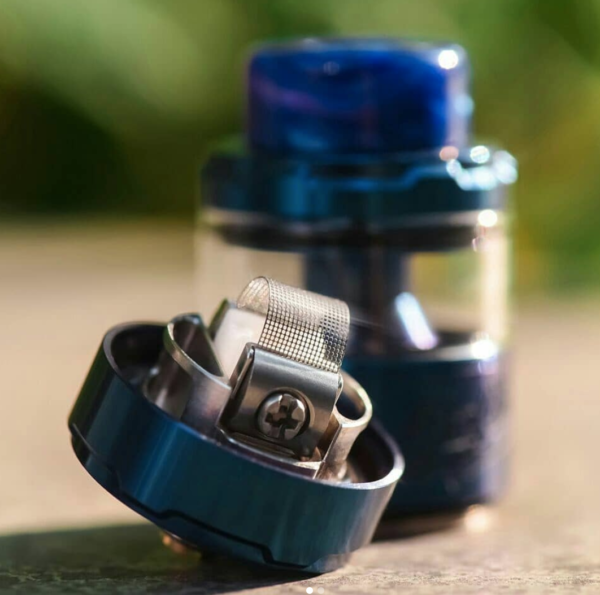 It’s big. Very big in fact. And tall. It kind of looks like the Zeus RTA and it’s available in a range of colors (mine’s blue).

Exact dimensions are as follows: 25mm x 48mm. You also have an 810 drip tip, a 3.5ml, and 5ml tube, adjustable side airflow, and top-mounted juice fill holes. So far, so good.

The tank comes apart pretty easily: unscrew the bottom to access the deck. The top of the tank comes off easily enough to reveal the juice fill ports. The drip tip is removable and you have a super-smooth airflow control on the side of the tank right next to the “PROFILE” logo.

Visually, it’s a very good looking tank. It is about on the tall and chunky side, but that’s fine with me – I don’t mind my RTAs lookin’ a bit swole as long as they vape great.

What’s In The Box 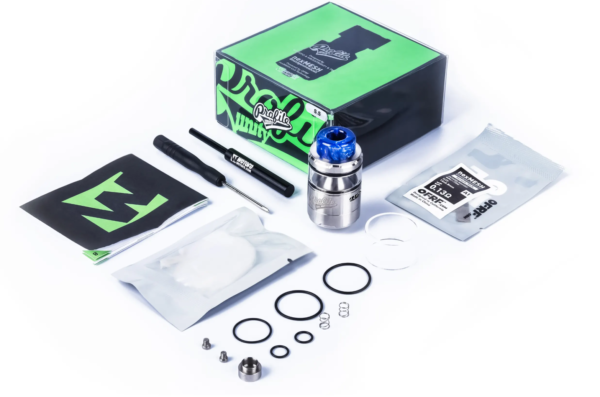 As usual, Wotofo includes a boat-load of accessories in the box. You get everything you need – including two mesh coils – to start vaping right away. Here’s a full list of the Wotofo Profile Unity RTA box contents:

You’ll need to make sure you use the curving tool as well. This ensures that your mesh coil is curved properly for the deck. It also ensures you have enough room to get your cotton installed properly.

The deck on the Profile Unity RTA is much the same as the one aboard the Profile RDA. It has the same clamp-based system that holds your mesh coil in place and the same spring-loaded, plastic platform that pushes up your wick into the mesh coil. 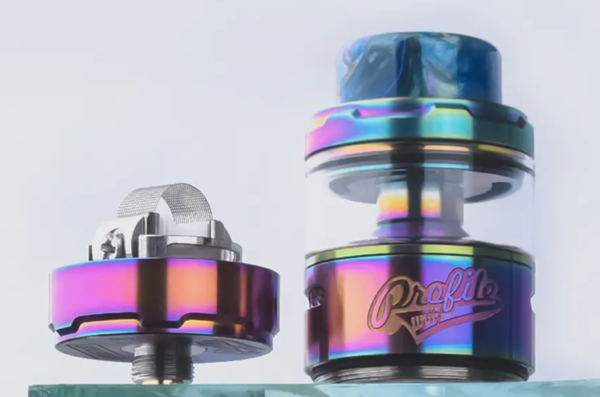 The deck is simple enough to work with; just curve your mesh coil, place it, screw down the clamps, and add your wick. In principle, it is very straight-forward. But where things get a little trickier is the wicking. You have to do plenty of trimming in order to get it just right.

A lot of RTAs are fiddly to wick, and sadly the Profile Unity RTA is not an exception. This is partly down to the show-lace-tip cotton Wotofo includes; it’s WAY too thick. You basically need to pull it in half and then trim it down some to get it just right for the installed coil.

Once you’ve got the wick to the desired thickness, you have to trim down the ends (again, quite a bit), as they need to go through the little slots on the side. 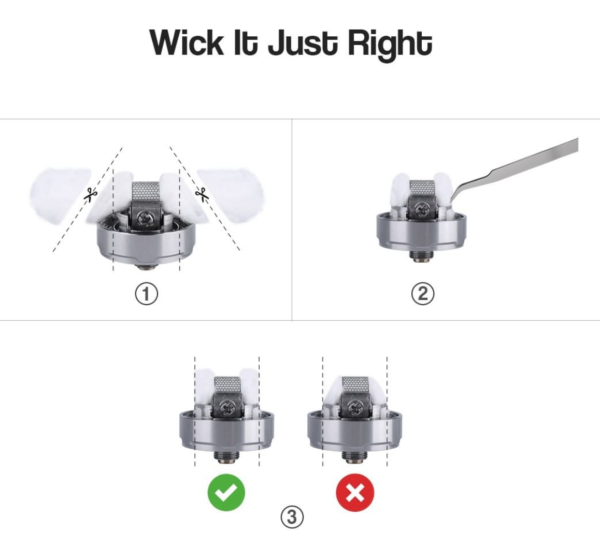 Leave it too thick and you’ll get dry hits. Too thin and it’ll leak.

Case in point: I messed up my first attempt and had to do additional trimming to get it working properly. If you’re brand new to RTAs, I think this one might be a little too tricky for most. I’m pretty much a veteran with rebuildable tank atomizers, for instance, but I struggled to get it right first time.

Because the mesh heats up more or less instantly, there is little to no delay between hitting the fire button on your mod and getting a mouth-full of vapor. I don’t know if I like this; I think I prefer the more gradual heat-up you get with wire coils. Obviously, this is a personal preference.

The flavor is very good, though, once you get the wicking exactly right. As noted above, my first attempt failed. It got a couple of hits and then, BOOM, a nice dry hit that made my eyes water. The key thing here is the wicking. You’re probably best using your own cotton over the stuff that’s included in the box.

If you do use the included wick, make sure you reduce its size by about 50-60% as it is far too thick for the deck and mesh coil as is.

When I got it working properly, the flavor was great. And I really like how much difference the AFC on the side makes to the overall vape. I found my personal sweet-spot with three holes open. You need to have a play around with it and find what works for you, basically.

Overall, this RTA is not that easy to set up. It requires precision with wicking and there really isn’t any room for error, sadly. And this means it probably isn’t a good option for anyone that is relatively new to RTAs, not when there are so many simple to use RTAs around right now. 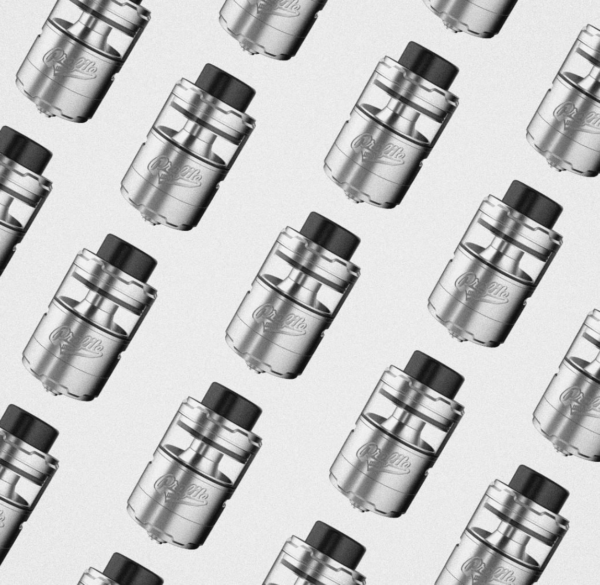 I like the idea and the philosophy behind the Wotofo Profile Unity RTA but I am not immediately sold on it as a whole (right now). The main reason for this is that it is incredibly tricky to wick correctly. And when you’re talking about an RTA tank, this is exactly what you don’t want to be dealing with…

The flavor it delivers is superb. That much is true. But it took me at least three attempts at the wick to get it “just right” – and that’s two attempts too many in my book. Even more so when you factor in the sheer number of RTAs that are incredibly simple to wick. Even for newbie vapers.

As I said, this is an “immediate, out the box impression” post – it’s not my full verdict or review. That will come in a couple of weeks, once I’ve had a chance to get to know the tank a little better.

Initial impressions, right now, aren’t great if I’m 100% honest. It just feels like it’s going to be a pain in the ass to deal with at the moment, and this, for me, is never usually a good sign. For instance, when I tested the Intake RTA, it worked perfectly from the get-go. No messing around, no nothing. Just great flavor, simple wicking, and no leaking.