The Uwell Havok comes from a long line of amazing products from Uwell. How does it stack up against it’s competition? Today we take a look at what makes the Havok special.

Uwell is typically known for a lot of things when it comes to the world of vaping. Off the top of my head, the Crown series of tanks definitely comes to mind. The Crown was not only popular for it’s time, it is still popular to this day! As of now, there have been 5 different iterations of the Crown Tank, and each one has seen a huge improvement in quality.

More importantly, the coil quality has always been outstanding with Uwell. The quality control has consistently been out of this world. But the flavor has also been amazing on all of the different versions of the Crown Tanks. The newest ones are mesh, like most modern sub-ohm tanks, but the quality is just a little higher than the usual fare.

What Uwell is not very known for, is mods. It has only been in the past two years that Uwell decided to start making mods to pair with the Crown Tanks. We also saw the launch of the now-famous Caliburn and Caliburn AK2 series, which was Uwell’s take on the portable pod system.

Some people called the Caliburn the “Juul Killer” and I could see why. I definitely enjoyed mine, and the pods were typical Uwell quality.

Now Uwell is taking a stab at the pod mod market, and it looks like it’s directly targeting devices like the Lost Vape Orion. On the more affordable side, you can say the Uwell Havok is also competing with a heavy hitter: The SMOK Nord series. But how does the Uwell Havok hold up against devices like The Nord and Orion?

Let’s take a look at the new Uwell Havok, and break down all of the features!

It might be easy to write the new Havok off, as it looks like a bunch of other devices that we have seen before. But Uwell always has a trick or two up it’s sleeve when it comes to the design of the products. You honestly cannot deny the quality that Uwell usually produces, and the new Havok is no exception. Let’s break it down:

First, I think we should mention the size of this device. It’s small, but not tiny…if that makes sense. The Havok is somewhere in the size comparison of the SMOK RPM80. The mod is tall, but pretty thin. I have no problem fitting it in my pocket. It may look big in pictures, but I assure that’s not the case.

Buy The Uwell Havok Today for $41.99 From VaporDNA!

One of the reasons the Uwell Havok is a little chunkier than pod mods of it’s usual ilk, is the large 1800mah battery. You usually do not see such a large battery capacity on these little devices, but Uwell has managed to pull it off. The battery lasted me all day with regular usuage, something I wish they would have improved on the Caliburn A2.

The USB-C charging is also a great feature. This allows the mod to charge at 2 amps. From almost completely dead, it takes about an hour to charge up completely to 100%. You can also vape while you charge the mod, with pass-thru charging.

The zinc alloy chassis is lightweight, but it also feels pretty durable. Nothing about the Havok feels cheap. It is definitely solid. I like the single resin panel accent, that is different across the many variants of chassis colors. The black version in particular looks really sexy and stealthy.

It seems like most pod mods cap out at 80 watts these days, yet Uwell decided to stick to 65 watts for the Havok. This is more than adequate, as the most powerful coil caps out at 45 watts. You’ll never need 65 watts with the Uwell Havok, much less 80 watts.

The pod itself, will seem familiar to most vapers with pod mod experience. The pod loads coils from the bottom, like Voopoo and other pod systems that have become popular with “plug and play” systems. Also like other pod systems, you have a little silicon plug for a refill port.

The difference in the Havok, is that you slide the top open to reach the port. I think this solves the leaking issues you may get with similar pod systems that leak from the bottom fill port (I’m looking at you, SMOK). I never saw a drop of liquid in the base of the mod, and that makes me really happy!

But let’s talk about the important part: the coils that Uwell is famous for!

The kit comes with two different coils. You have a 0.25 mesh coil for sub-ohm vaping and freebase liquids. This coil is rated for 45 watts, but I found that the flavor is perfect right around 40 watts. Does it live up to Uwell standards? I definitely think so! The flavor is outstanding for a pod device. It lives up to the Crown Name.

The second coil is a 0.6 mesh coil that is obviously designed for higher nicotine strength liquids, and more restricted airflow. You can almost dial this down to MTL, but it falls just short. These coils are rated for 20 watts, but I found that only 15 watts was more than enough! I used salt nic with this coil, and the flavor was very good, yet not quite as good as the 0.25 sub-ohm coil.

The airflow is semi-adjustable from the front of the mod, where the TFT screen is. When it comes to the TFT screen, it’s just...ok. There is nothing special about the screen or the chipset, and it is pretty basic. But I don’t think you need an impressive display to enjoy a small pod system like this one, The screen displays all of the info that you need in large font, and has a puff counter.

So we have an easy to use system, with superior coils that provide tons of flavor. Do I have any gripes?

I have one, actually. The branding on the device is a little out of control.

I was disappointed to see the cool looking resin panel covered in branding by Uwell. It has a giant “Havok” logo, with a slogan underneath. I think this would have looked so much cleaner without the huge branding. Especially on the beautiful, colorful resin panel.

It feels like I am holding a damn billboard for Uwell. A small, simple logo would have sufficed, guys!

I honestly never mind if there is a small amount of branding on a device. I get it. But this is just way too much on a mod that would otherwise look really cool, especially the resin side panels.

If flavor is a main factor for you when buying a device, and you need something small and portable…I think the Uwell Havok checks a lot of boxes. It has more than enough power, and superior mesh coil technology. My time with the Havok has yet to end, as the coil has held up all week so far!

Uwell has been known for it’s coil technology for quite a while, and it is easy to see why. The company obviously puts a lot of thought into the design of the coil. Unlike most mainstream companies, that seem to have new coil heads out every month.

My only real complaint with the Uwell Havok is the aesthetic choices. I don’t understand the idea of pasting “Uwell Havok” all over the device in an attempt at branding. For some people, this will not be a big deal, for others…it may be a small problem.

If you are looking for a small device, or you are a brand new vaper, you could do a lot worse than the Uwell Havok. The flavor is phenomenal, and while it’s not as small as some devices, it has the goods where it counts. It’s also very affordable! Buy The Uwell Havok Today for $41.99 From VaporDNA! 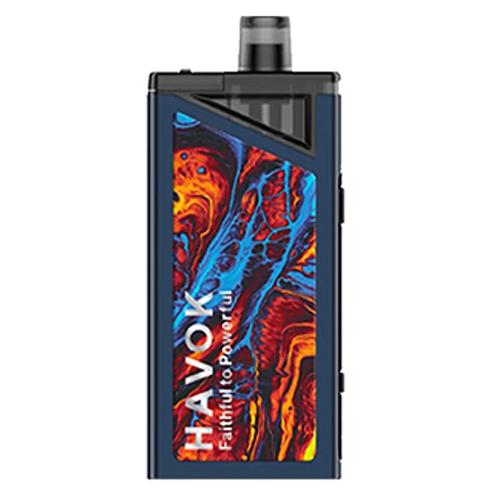