In an attempt to refresh the Dead Rabbit range, Hellvape have completely reworked the Dead Rabbit RDA into a chunkier, airier atomizer, not too dissimilar from the MFG Armageddon from years ago. It may not be unique or revolutionary, but damnit if I like the new Hellvape Dead Rabbit Max!

Hellvape have been trying to refresh the Dead Rabbit line-up since their very first RDA dropped with not too great success. The original Dead Rabbit RTA was rubbish, Dead Rabbit RDA V2 didn’t offer quite enough improvement and this trend continued throughout the range.

The Dead Rabbit Max, while in essence is just another Dead Rabbit RDA, unintentionally copies one of the my favourite old school RDAs and I have a hard time faulting it while wearing my nostalgia coloured glasses.

The Hellvape Dead Rabbit Max is a big boy, coming in at 28mm wide and nearly 40mm tall. It might not be massive by todays standards, but compared to the original Dead Rabbit RDA, it’s an absolute unit.

The cap flares out at the deck portion to allow for bigger builds and reduces in size as it moves up to the drip tip. I’m not sure if this is done purely for aesthetics, but logic tells me this improves flavour as vapour is condensed as it moves up the cap.

There’s a host of new colours included in the Max, including a really sexy army green that matches with absolutely none of my mods.

The build deck fuses the traditional Dead Rabbit top down posts forcing you to build higher than usual. It may not look similar to the deck in the Armageddon, but due to the design of it, your coils were relatively high up on the deck. The biggest difference between the two here is that the Dead Rabbit Max positions the coils closer to the centre, improving airflow at the expense of a warmer vape.

Airflow on the Dead Rabbit Max is a little odd compared to their previous offerings. The two “x” cutouts give the Max a robot face appearance and they look to be static. They can be moved to close off airflow, but once you do this, airflow becomes turbulent. Keep them wide open, they work well in this configuration, but make absolutely sure they flow over your coils.

All in, the Dead Rabbit Max is good looking atomizer, one I have no qualms about running on more expensive mods. The airflow slots offer an interesting design, the top cap unique with it’s flared bottom and the colour schemes are much too my liking.

You’d expect the Hellvape Dead Rabbit to perform like, or very similar to every other Dead Rabbit RDA over the last few years (and there’s been more than a few). Sure, there’s rarely been a bad performing DR RDA, but the Max is on a whole different level. If you’re after the OG experience, you’re not going to find it here. The Dead Rabbit Max gives me flashbacks of comp level RDAs like the Armageddon and Twisted Messes Comp RDAs. Airflow is huge and for those not familiar with the comp days, may be overwhelming.

If you’re from 8 years ago, you’d distinctly remember cloud chaser RDAs offering nothing more than billowing vapor with flavour being a mere afterthought or even non-existant. Not so with the Dead Rabbit Max. It may be a cloud chaser, but flavour, when setup right, is fantastic. It takes a bit of fiddling to get your coil height just-so, and wicking prefect, but those familiar with the original Dead Rabbit will get the hang of it fairly quickly. I’ve always found the Dead Rabbits to be a bit finicky to get the builds right, even though the deck itself is easy to use, so a bit of playing around will be required here especially now that you are heavily reliant on your wicking.

On a more superficial note, I did find the top cap to be extremely tight and took effort to remove or adjust airflow. Once the cap was off, I spread some e-liquid on the o-rings and it became less of a hassle to remove, but still tighter than I would have liked. Perhaps tight is good, because th Max holds 7ml of juice, wouldn’t want the cap coming off and dumping all of that on your brand new jeans.

Coming around to airflow, it’s a strange change for the Dead Rabbit series this time around. While it is adjustable, airflow is massive wide open and closing it down does not work well with the Max. Wide open it’s smooth and flavourful, I’d just keep it there.

The Hellvape Dead Rabbit Max performance is the polar opposite of previous versions, but oh so good. This might be one of the best performing cloud chasing (even if unintended) RDAs I’ve used in 2022.

I’m not going to harp on about how much I enjoy the Dead Rabbit Max, I think it’s fairly clear that it’s one of the best performing Dead Rabbits I’ve tested to date.

It’s not for everyone though and I’d go as far as saying it may not be to your tastes if you weren’t big on cloud chasing back in the days.

As a flavour only RDA, there are better performing atomizers, although, few get the balance right between huge vapour production and flavour as well as the Dead Rabbit Max. 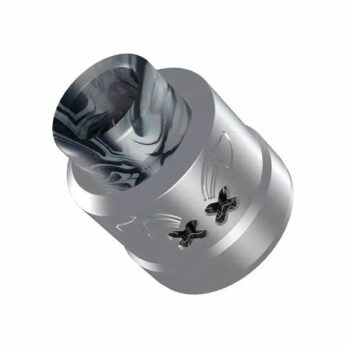