The Element E-Liquid MEGA Review – Drake takes a look at a range of E-Liquids feat. the Dripper Series, Tonix, Emulsions and FAR!

Back in 2016, Element E-Liquid sent me a MASSIVE box of E-Liquid.

And I really do mean MASSIVE.

I’m not sure exactly how many ML of E-Liquid they sent, but it must have been in the thousands.

I was vaping a new flavour of E-Liquid pretty much every day for a month.

After this, I started to isolate the flavours I really liked and put them aside.

Next, I moved onto the flavours I wasn’t so keen on; again, I highlighted these, made a note, and moved along.

I liked pretty much all of them.

I mean, I vaped the entire lot, even the ones I wasn’t keen on, so even those were OK.

Having said that, I’m not too fussy with E-Liquid flavours; I’ll try anything once – within reason.

So the fact I got through all of them in the space of a couple of months isn’t all that telling.

Nevertheless, I passed out some bottle to friends and colleagues and the feedback was, for the most part, decent.

Element sent me a selection of E-Liquids from its Dripper Range, two 180ml bottles from its FAR range, and a bunch of its Premium Custom Blends.

Element describes this flavour as, “an intoxicating candy blend, this vibrant coupling of sweet and colourful fruit come alive with every puff.

Brimming with mind-blowing rainbow candy, this delectable treat is the golden ticket to relive those fond childhood memories.” 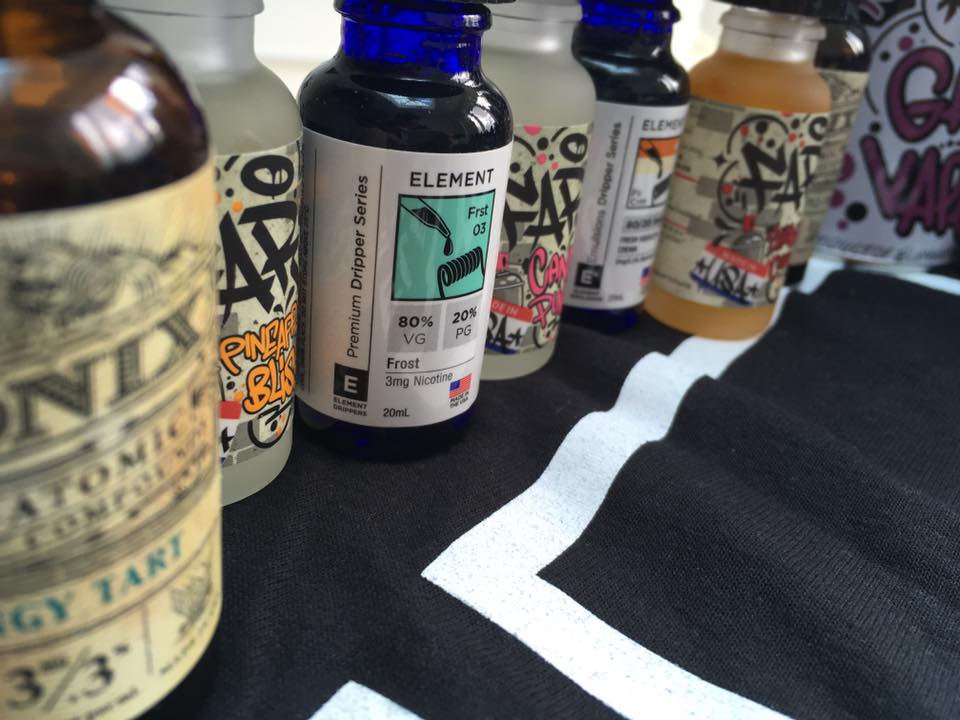 FAR Candy Punch is available in the following mixes:

The spray can is a nice touch, it certainly sets Element apart from the crowd.

I cannot remember ever seeing E-Liquid packaged in such a unique and cool manner.

The flavour is seriously on point as well if you’re into sweet, fruity E-Liquid. I vaped this first and was immediately impressed with the flavour which is complex, tangy and very addictive.

This is the line of E-Liquid I have come across the most in my travels up and down the country.

Most vape shops worth their salt tend to stock it and, while it is a premium E-Liquid, it’s priced very aggressively compared to some brands’ offerings and it tastes great to boot, so it’s no wonder really why this is a popular choice with retailers. 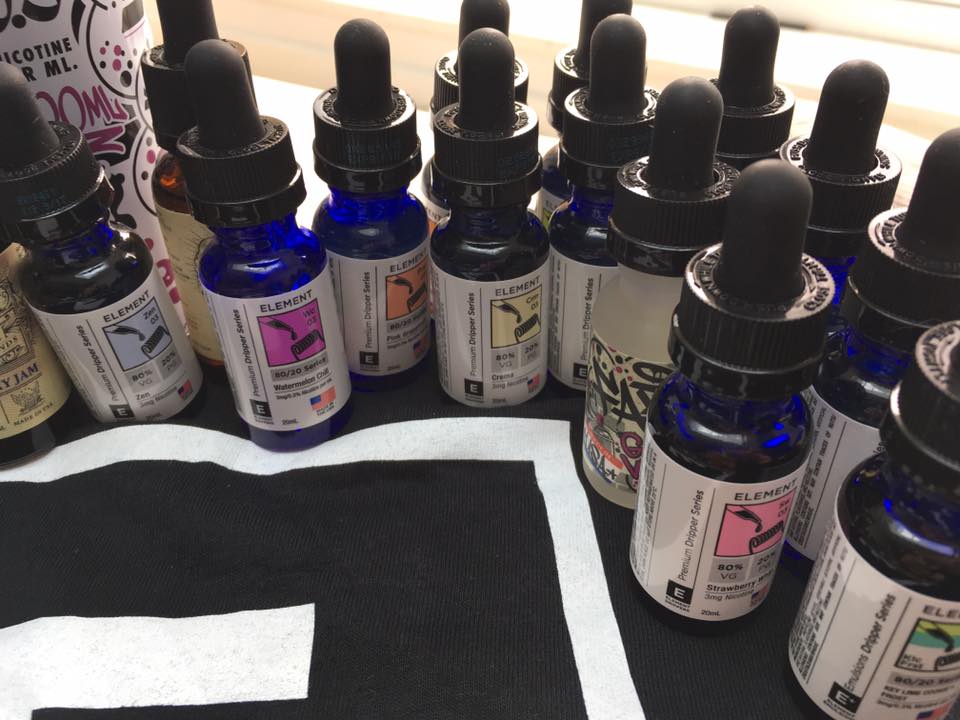 The dripper series is an 80/20 mix and has won a bunch of awards since it first landed.

Pound for pound this stuff is great, all-day-vaping material.

My favourite flavours in this range, though I do

The flavours I wasn’t too keen on were:

Element’s Emulsion line are all 50/50 and packed full of BIG flavours.

Next, to the FAR flavour, these were my favourites by quite a margin, as the flavour combinations were simply off the hook.

The most notable of which are as follows:

NOW, THIS IS WHERE S**T gets REAL.

This line is amazing!

I couldn’t get enough of Tonix, which, in my opinion, was perfect across the range, though a special shout-out has to go to Peanut Butter & Blueberry Jam which was simply sublime.

I could vape that all day the rest of my life and die a happy man. 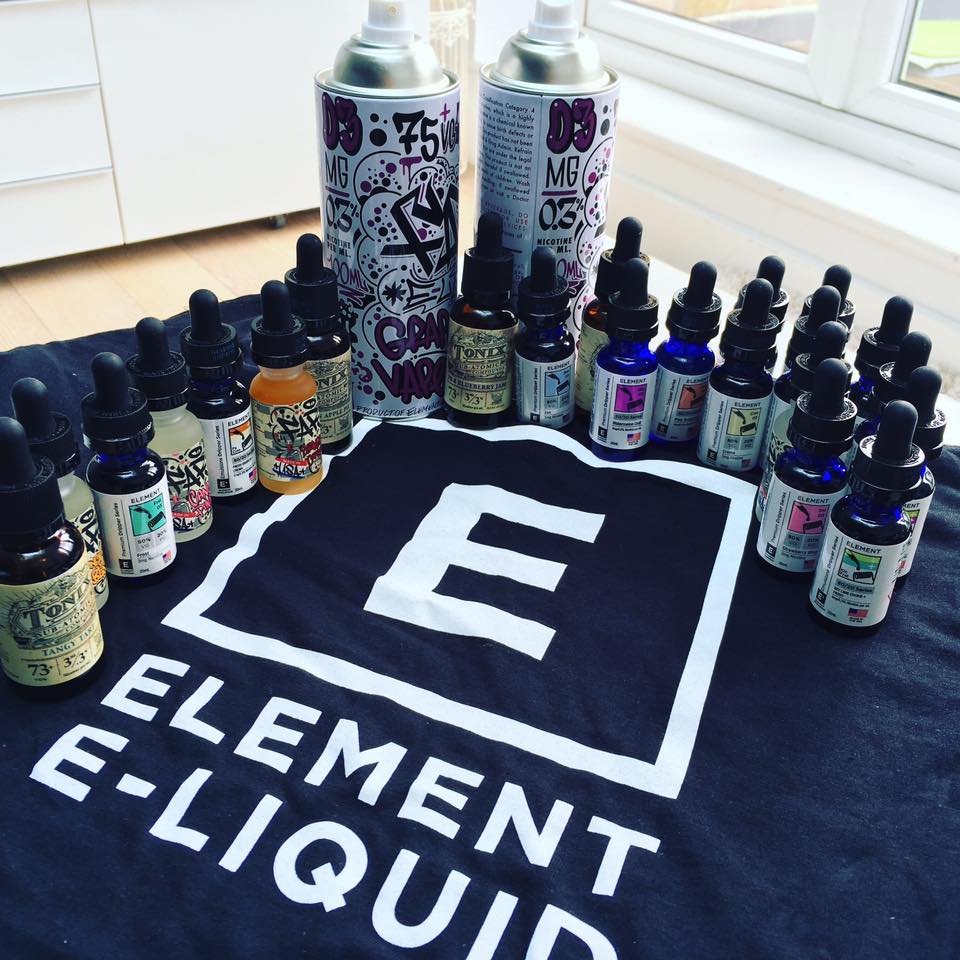 The other flavours in the range – American Apple Pie, Blood Orange, Cherry Almond and Tangy Tart – were all great, tasty and I enjoyed vaping all of them but the crown, IMO, has to go to PB & Blueberry Jam.

Out of everything I got I would say Tonix was the standout line for me.

It has everything you’d expect from a premium line-up of E-Liquid – great flavour, uniqueness, excellent packaging – and much more besides.

Do yourself a favour and pick some up as soon as you can. You will not regret it.

There isn’t really one, though one thing I did notice when testing all these fine, fine E-Liquids was that my coils weren’t lasting as long as usual.

The reason for this, according to a few of my sources, is that Element is a very sticky E-Liquid and this, of course, clogs up your coils faster.

Now, the reason for this is all that flavour you get, so it is something of a double-edged sword if you’re using a sub-ohm tank.

If you’re rocking an RDA or rebuildable tanks, it’s nothing to worry about.

I tend to build most of my coils these days, so it’s not quite as bad.

If you’re rocking a traditional sub-ohm tank, however, you may notice your coils not quite lasting as long as before.

Still, when you consider the quality ingredients, flavour and choice that Element offer this is hardly something to be too concerned by, as the actual effect in relative terms isn’t all that pronounced.

Certainly, nothing to lose sleep over anyway.

I also like that Element ship ALL their E-Liquids in glass bottles. This is better for flavour, the environment and it looks and feels better in your hand on sat inside your vape cabinet (yes, I have a vape cabinet).

I liked Element A LOT before getting this haul in, so I didn’t really need any convincing of the company’s pedigree during testing.

What I wasn’t aware of, however, was just how many ranges Element actually produces.

Tonix was a revelation and something I will continue to go back to.

FAR was decent as well, but not quite up to the standard of Tonix, and the company’s Dripper series… well, it’s already a classic, so you don’t need me to tell you how good it is.

If you haven’t tried Element E-Liquid and you’re looking for something new I would 100% recommend you check them out.

In order to appreciate what Element is all about I’d order a selection from each range.

I would also insist that you buy some PB & Blueberry Jam as well because it is one of the easiest E-Liquids I have ever had the pleasure of ingesting.