As much of a gear snob as I am, I do see value in well priced products that perform to expectations. The BP Mods Pioneer Insider is one those products that not only meet expectations, but far exceeds them, quite a feat for the companies first foray into bridges. The Pioneer Insider is a must have if you’re looking at getting into bridges without spending thousands of dollars.

BP Mods based the Insider (not to be confused with Steam Tuners Insider bridge) on their Pioneer RTA, which, as expected is a solid performer as well. Not the best RTA ever made, but it translates into a bridge very well. As a bridge, it steals its design from the phenomenal Atmizoo Vapesnail and makes no effort at hiding it.

Different to regular bridges, which in essence is just a build deck with an airflow chamber that slots into your borro, the BP Mods Pioneer Insider replaces your entire borro with the build deck and chimney integrated into it. This has a few benefits like easier filling, not as messy when rebuilding, a bigger deck and they generally look better than traditional bridges. They are not without fault though and the biggest issue I have with these solutions is losing the ability to easily on the fly change your deck in a borro. If you struggle to decide which style of bridge you like, the Pioneer Insider may be for you. With the included borro adapter, the Insider can be installed in a traditional borro, but that’s just silly, you’re taking away everything that makes the Insider special.

The Pioneer Insider, with its understated design, is pretty good looking. Not quite as nice as the Vapesnail, but compared to, for example, the Vessel, it’s definitely not revolting.

Branding is not overdone on the chimney that’s a beefy squared affair that looks like it would provide great flavour thanks to it’s angled lines.

The top cap slides onto the bottom part that acts as both the deck, airflow and wick slots. The deck is slightly elevated off the base to allow juice to flow easier into the juice slit. Airflow is adjusted in typical bridge fashion, replacing the 510 pin with one of the included holed ones. BP Mods include 7 of these that take airflow from 1mm to a whopping 3.5mm.

The build deck is nothing special, a 2 post design (See Hellvape MD RTA) with airflow right below the coil, but it’s large for what it is.

BP Mods include a silicone adapter that allows you to install “condensation rings” which is just a small piece of cotton that absorbs excess juice that collects underneath the deck, a common issue on all borro devices. It works well as you would expect.

Even though the overall design is copied from Atmizoo, the build deck differs vastly and as such, can’t be compared what-so-ever. Anyway, here’s me comparing the two.

The Vapesnail performs like an actual high end MTL RTA, it’s easily my favourite bridge of all time. The airflow is buttery smooth and flavour is beyond belief. The BP Mods Insider Pioneer, even at a fraction of the costs, performs near identical to it. I would go as far as saying flavour is a notch better. Where the Snail beats the Insider is with airflow. It’s not, not smooth, but not as silky as the Vapesnail. Build quality on the Insider is also not quite on the level of the Vapesnail, but being nearly 64 dollars cheaper, I can accept the small drop in quality. The threads aren’t as smooth and it doesn’t feel or look as premium as the Snail, but it’s up there for a product from China.

The two post design on the deck ensures straight forward building and wicking, but I’ve found myself playing around with coil height too often, so take that into account.

The Pioneer Insider also doesn’t like nano coils (which are my favourite unfortunately) and will dump the entire tank of juice out the airflow in a matter of seconds; make sure you do at the bare minimum 2.5mm for best results.

Rounding back to the airflow options, you will definitely find a setting that works for you, from 1mm that’s as tight as a nuns bum to up to 3.5mm that’s as open as it gets on a bridge, there’s a wide enough choice for even the most picky. 1mm is by far too tight for me and it felt like I’m trying to suck the juice through the chimney. 2mm I found to be a great compromise on restrictiveness and vapor production and everything here and up the airflow was smooth as silk. With bigger airflow selected, the bridge tended to get gurgley near the wicks end of life, but we can put this down to the amount of wick I stuffed in the juice well. Your results may vary.

Another issue I’ve experienced, and it’s not limited to the Insider, is that the massive 6ml capacity is a pain in the arse when your coil is due for replacement and you still have a full tank of juice. You either end up trying to plug the top hole and gently removing the deck or just chucking it all a way. Either way, it’s not ideal and I’d love for a manufacturer to come up with a solution to this

Let’s not pretend that owning (or even ogling at) high end devices is fun. I love a good premium, mostly expensive device in my hands. They have an aura of class surrounding them and I love the feeling of superiority. That said, if you can have a product that costs less than a third of it’s direct high-end competitor that performs just as well with similar build quality, why would you shy away.

The BP Mods Pioneer Insider is one of those products; you don’t need to spend the average monthly salary of a Venezuelan on a bridge to have something that works as intended.

It’s by far not the cheapest bridge available, but hell does it outperform a host of $100+ bridges.

The flavour is staggering, the build quality is more than acceptable and the airflow rivals that of devices 4 times its price. 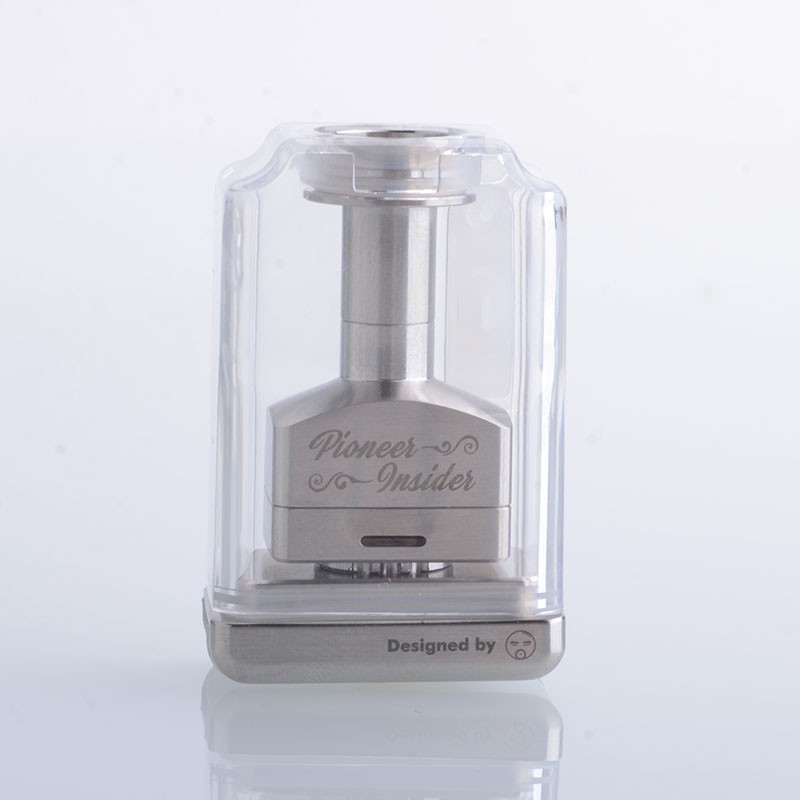