Ask around, most people think flavors are the #1 cause of the teen vaping epidemic that started in 2017-2019. But as new data confirms, it actually had very little to do with flavors…

How do you make a teenager want something? Simple: tell them they can’t have it. Do this and your average teenager will almost certainly go out of their way to acquire the said thing.

This is how teenagers are wired.

I know this because, not so long ago, I used to be one. Teenagers are also highly curious creatures too, thanks to a heady mix of hormones and a distinct lack of life experience.

OK, so what does this have to do with vaping? Quite a lot. Remember back in 2018 and 2019, when the teen vaping epidemic started? Well, back then, the official line peddled by those with a dog in the fight was that it was flavors that were attracting kids to vaping.

Curiosity is The #1 Reason Why Teenagers Start Vaping

This “flavor argument”, however, as been debunked many, many times by plenty of people, including plenty of scientists and researchers. Instead, newer data suggests the teen vaping pandemic might well have been cleverly engineered by the media to create the means through which the vape market could be regulated or, worse still, shut down.

According to data from the 2019 National Youth Tobacco Survey, upwards of 55% of the teenagers asked said that “curiosity” – meaning, constantly reading and hearing about vaping online and on TV – was the #1 reason why they tried it in the first place. 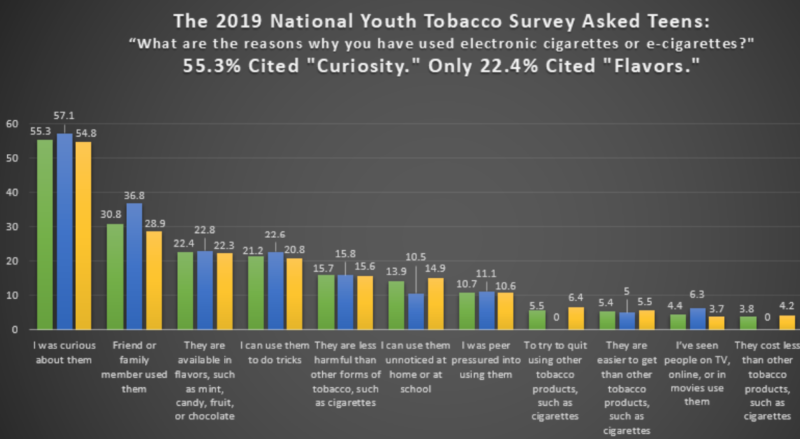 Conversely, of the polled teenagers, only 22% said they tried it because of the flavors. You can see why I opened this post in the way I did; it was done to illustrate just how easily figures and data can be fudged. I mean, the idea that flavors were responsible (and should be banned as a result) was always nuts. No one’s banning flavored booze, after all? And alcohol kills tens of thousands of people every few months.

In fact, even when JUUL entered the market, the trend of teenagers vaping was still tracking downwards, just like smoking rates. Curiously, the actual rates of teen vaping only started to increase once the media and the surgeon general started harping on about vaping, using practically every form of online media possible – from social media to news posts and YouTube. 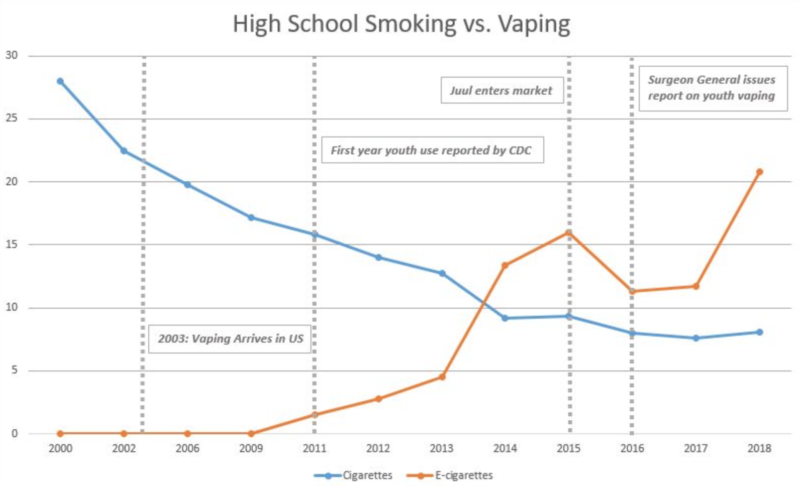 This started a tidal wave of bullshit that didn’t break until, well, the start of the current COVID-19 epidemic. There were deaths reported, allegedly related to vaping, but subsequent research showed that these deaths were actually related to illegal THC carts, not vaping. The FDA and CDC even had to backtrack on this, retracting previous statements, although by this point the PR war over the vaping narrative was more or less won.

How The Media Pushed False Narrative About Vaping

The PR attack on vaping was a masterclass in diversionary tactics as well – create a problem from nothing, get the media to push it, watch the user rates uptick amongst teenagers, thanks to heightened curiosity, then wade in with draconian regulation and laws to solve a problem they essentially helped create. If it wasn’t so abhorrent, you’d be kind of impressed.

The average dude on the street has no idea that vaping is 97% safer than smoking. Thanks to the FDA and bunk science from shills like Tobacco Free Kids, as well as people like Mike Bloomberg, vaping’s reputation has been destroyed in the USA, despite the fact it has helped many millions of people kick their lifetime smoking habits more or less overnight.

It’s time to wake up. They don’t care about you. It’s all about control and money in the USA – not health or the well being of your kids. Think about it like this: the US makes more money from cigarette tax, so it’d rather you smoked than vaped. Sound crazy? This is the reality. And that should tell you everything you need to know about the people in charge of this country…