Vapes On A Plane: I Did It – But You DEFINITELY Shouldn’t

You can’t vape on a plane. I did… once, and I got away with it, but you should NEVER try what I did – the risks (and fines) for vaping on a plane are massive!

If you vape on a plane and get caught, you’re in a world of pain. Big time. Especially if you’re inbound to the US. Trust me, you do not want to experience the long arm of the TSA. It’s just not worth it.

I have vaped on a plane. I did it a couple of times, a few years back, on a flight from San Diego to London Heathrow. I’m not proud of it, but I wanted to do a post on it and warn anyone off from trying it in the future.

Why Did I Vape on A Plane Then?

Firstly, I was drunk. I’d spent three hours sat in San Diego airport drinking watery American beer while I waited for my flight. Second, while sat at the bar, I read a forum post about a guy that had vaped on a plane and had got away with it, so, being the drunk asshole that I am, I figured why not.

My flight was a big one – San Diego to London Heathrow. I don’t really like flying, hence the beer, and the idea of going without nicotine just didn’t jazz with my asshole-drunk brain. But I was lucky, very lucky. I had no idea what I was actually risking.

Most importantly, though, I WAS NOT using a sub-ohm tank at the time; it was a small, AIO (all-in-one) vape kit. I can’t remember what model exactly, but it hardly kicked out any clouds, and it is this fact, I think, that ensured I didn’t get arrested or worse.

The pathetic amount of vapor kicked out by my small, AIO vape kit saved my ass basically. If I were using an RDA or a similarly powerful sub-ohm tank, I know for a fact I would NOT have gotten away with it – the clouds would have set off the alarms.

How Do I Know This?

Simple: big, powerful tanks kick out enough vapor to create a noticeable change in a secure environment, like the environment on a plane at altitude, and this WILL set off the alarms.

And you do not want that to happen while flying. Trust me, I’ve been in an emergency landing (Heathrow to Ibiza) thanks to some scumbags that decided to have a fight mid-flight and it was NOT fun. Not even a little.

Also, it just isn’t worth the risk – especially if you’re flying to the Middle East, as you could end up in jail. And I think we can all agree that going to jail in the Middle East for vaping is not something anyone wants to do. EVER.

Vaping is banned on ALL airlines. Period. You can take vape gear on board, though batteries have to be carried in your carry-on bag, but you are 100% NOT allowed to use it while flying. Most airlines will slap you with a hefty fine, some will press criminal charges, others will throw you in jail and fine your ass.

Moral of the story? Don’t do it – it really is NOT worth the risk.

DO NOT HIDE Your Vape Gear or E-Liquid

Seriously. I nearly got arrested in Hong Kong for having a box mod and a tank. I didn’t know just how illegal it was over there; they let me off, but it could have been much worse!

For this reason, if you’re going away to a foreign place please, for the love of god, make sure vaping is legal there before you go. There have been multiple instances of people getting arrested in airports for having vape gear on them.

Also, when you’re flying (to a country where vaping is legal), always keep your vaping gear in your carry-on luggage. Never put it in your suitcase, keep it on you at all times. This includes batteries, mods, tanks, coils and everything else in-between. If you want my advice, you’re probably best off getting something like the JUUL for when you go on holiday; it’s an all-in-one device and it’s very portable. This is what I do.

You can’t take a coil building kit on a plane, either; they have wires and pliers and things – things most customs officers DO NOT want to see. You will be stopped and they will take it off you, so get something like the JUUL. It just makes life a lot easier in the long run.

Taking Care of Nicotine Cravings on A Plane

You have two options: cold turkey or gum. I tend to carry gum with me, it tastes like ass, but it gets the job done. And since I don’t want to spend a week in jail, or pay a hefty fine, it’s a small price to pay.

It’s also worth keeping this in mind: vaping gets enough negative press as it is, we don’t need more assholes (like me) vaping on planes just because they think they can get away with it, so DON’T DO IT!

We have a reputation to uphold, after all 🙂 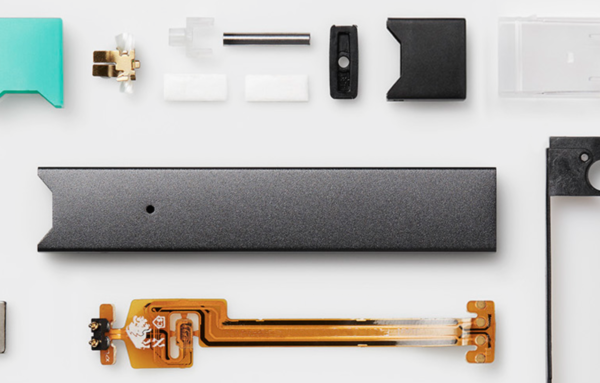