But there is a good reason for this.

For the longest time, I’ve had issues with my Dead Rabbit RDA.

Most notably it’s love of spitting in my mouth.

For this reason, I kind of stopped using it.

Instead, I’ve been using a lot of single coil RDAs – the Wotofo PROFILE RDA and the Hermetic RDA mostly.

But this left with me with a rather gaping hole when it came to a solid dual-coil RDA for squonking.

I have the Bonza RDA too, but I’ve somehow lost the squonk pin for it (it just disappeared like a fart in the wind).

And the deck on my Pulse 24 RDA is all messed up, sadly.

Then The Guillotine 2 RDA Happened

Wismec sent me its new Luxotic DF squonk kit; it comes with the Guillotine 2 RDA and is a dual-18650 squonk mod.

It’s regulated and has TC, and I am currently in the process of testing it out, so keep your eyes peeled for that one very soon.

I used the original Guillotine RDA back in the day.

It was OK, but nothing special. It had a deep-ass juice well which was good, but that was about it for unique points.

And it wasn’t good enough to make it onto our Best RDA Guide.

For this reason, I wasn’t expecting much from the Guillotine 2 RDA.

And at first my assertion proved correct; Wismec has barely touched the design. It still has those stupid, annoying clamp systems for locking in your leads.

On top of this, the screws that secure the clamps in place are utterly terrible.

See That Screw Sticking Out? That Was The Replacement! Utter Nonsense, Wismec!

One of them broke during my first build, which is bonkers, so it was a good job that Wismec saw to include spares in the pack.

Yes, that’s what I thought.

I built the RDA, using a spare screw, and set it all up.

I wasn’t pleased with how it went; a screw should NEVER fail on the first attempt. That’s kind of unforgivable.

But then I took a hit…

And it was very good. A lot better than I had expected. The airflow is very smooth and there wasn’t a hint of spit-back from the coil. 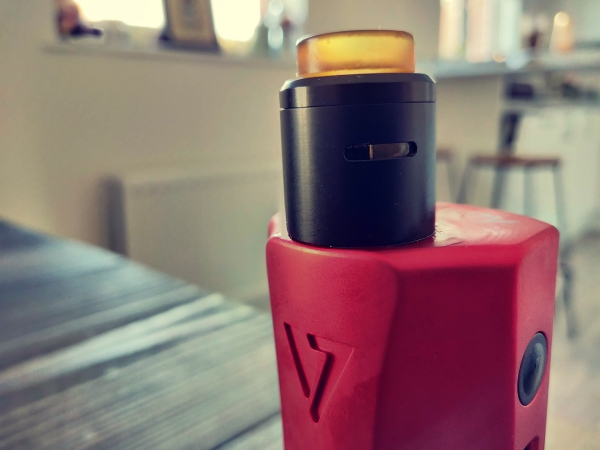 That was a week or so ago, and I’ve been using the Guillotine 2 RDA pretty much exclusively since.

I think I’ve put about 50ML of Juice through it so far and it hasn’t missed a beat.

Does this mean it’ll get a spot on VapeBeat’s #1 Best RDA List?

Probably not, I mean, the screw-incident is pretty bad. I couldn’t possibly recommend an RDA with screws that bad.

But for flavor, airflow and draw, it is VERY good. It’s easy(ish) to build on as well, once you get your head around the stupid clamp system it uses.

Is it a better RDA than the Dead Rabbit RDA? Not really, no – not even close. Especially if you know what you’re doing.

The Dead Rabbit RDA is a great RDA, but it does have issues with spitting that the Guillotine 2 RDA simply does not have.

In terms of the deck, the Dead Rabbit RDA is infinitely preferable. It’s simpler and so much better laid out. 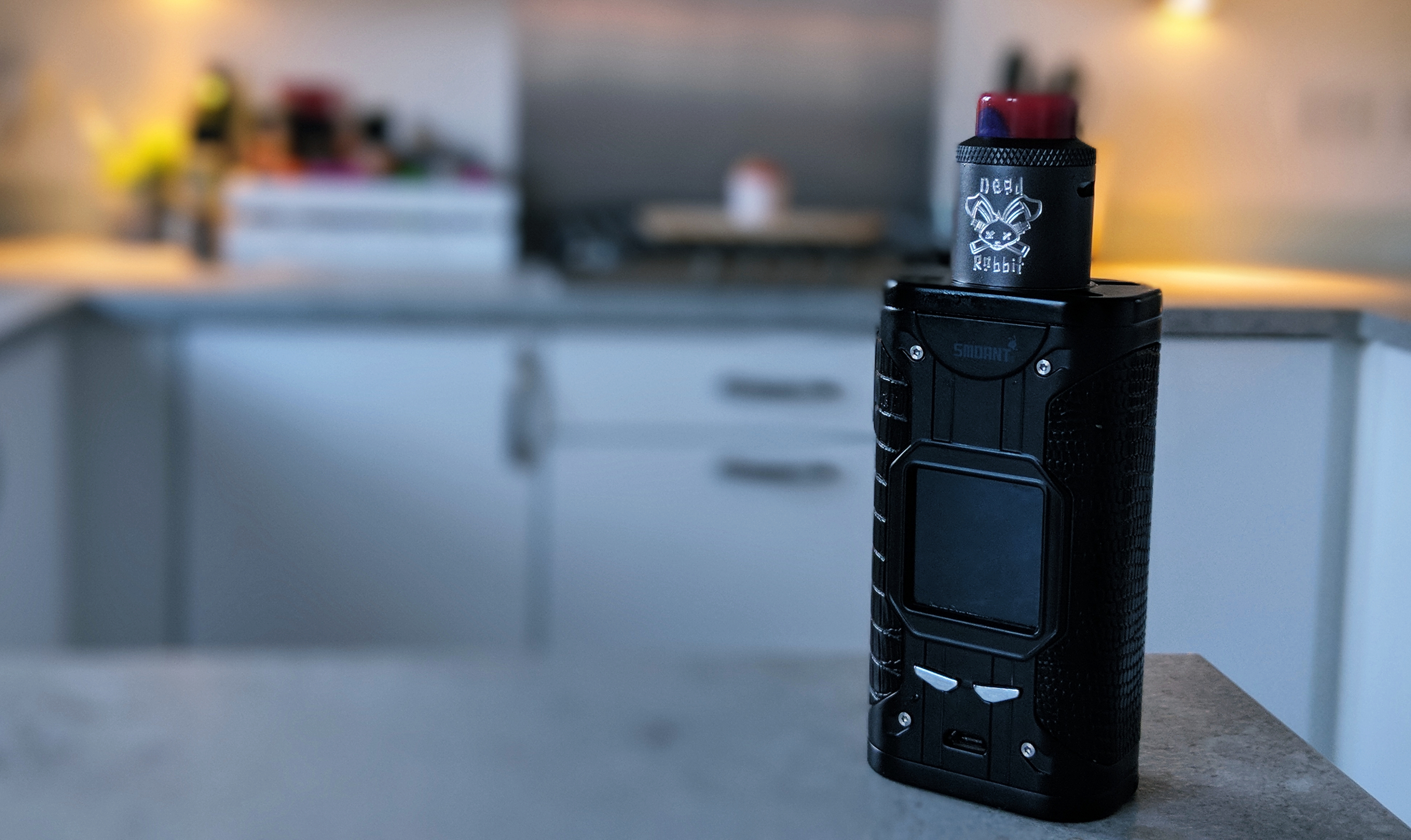 My Dead Rabbit RDA Back In Its Active Duty Days

I mean, the Guillotine 2 RDA isn’t going to win any prizes, but for a solid little performer, it’s great. And this shows us that sometimes, a cheaper RDA can be just as good as an award-winning one.

Especially if you’re in a pinch like I was!

The only reason I even have it is because it comes with the LUXOTIC DF kit. And if I didn’t have that in for review, I wouldn’t even have known it existed in the first place.

As a back-up though, or as an RDA to have laying around, the Guillotine 2 RDA is bloody great. I wouldn’t go out and buy one, of course, but as a solid, backup RDA it’s proved great these past few weeks.

The reception of the Wismec LUXOTIC DF Squonk Mod will largely affect how much use this RDA gets out in the wild.

My initial impressions of the Wismec LUXOTIC DF Squonk Mod are pretty so-so at the moment. The squonk bottle leaked a fair amount when I first set it up, which is never fun.

But it does seem pretty decent with respect to power output and general performance. It’s also a dual-18650 cell, regulated squonk mod which is good. 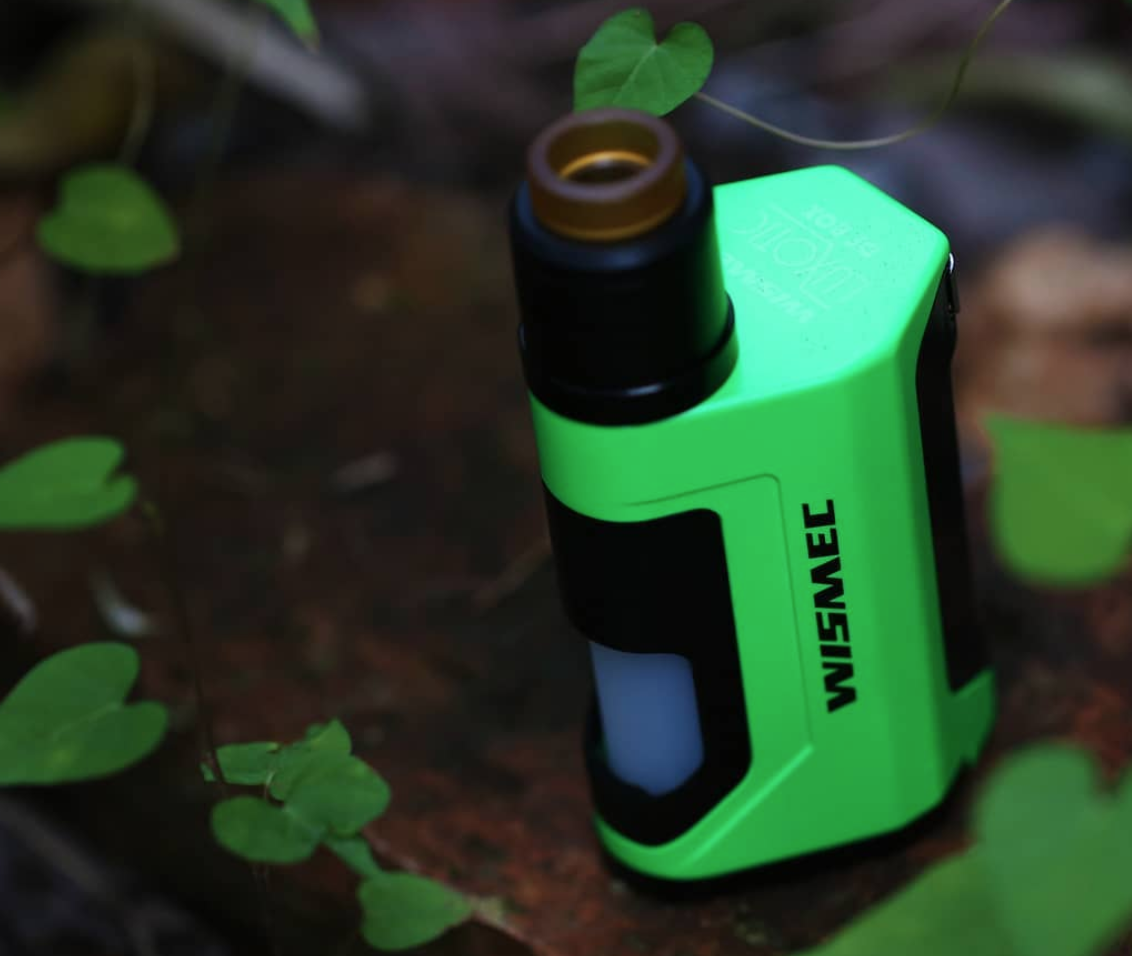 Is it better than the USV MachON 3 or Desire RAGE squonker?

The leaking and the design just don’t quite cut the mustard when compared to those two squonk mods.

The USV MachON3 (which also comes with a great RDA) is still the one to beat in 2018 in my view.

Still… at least the LUXOTIC DF comes with a decent RDA that kicks out plenty of flavor!

Products Used In This Feature