As someone that has used the Volcano Vaporizer for years, I can tell you that it is unlike anything else on the market. But is it worth $699.99? Let’s investigate…

Is The Volcano Vaporizer Worth It?

Regardless of its price, the Volcano Vaporizer – as you’ll see below – is well worth the asking price. Developed over the course of 20 years, the engineering that goes into making this desktop vaporizer is now, in the cold light of day in 2021, impossible to fault. From its external design to its innovative fan system, every inch of the Volcano Vaporizer screams quality. And, as always, if you want top-quality, you have to pay for it. 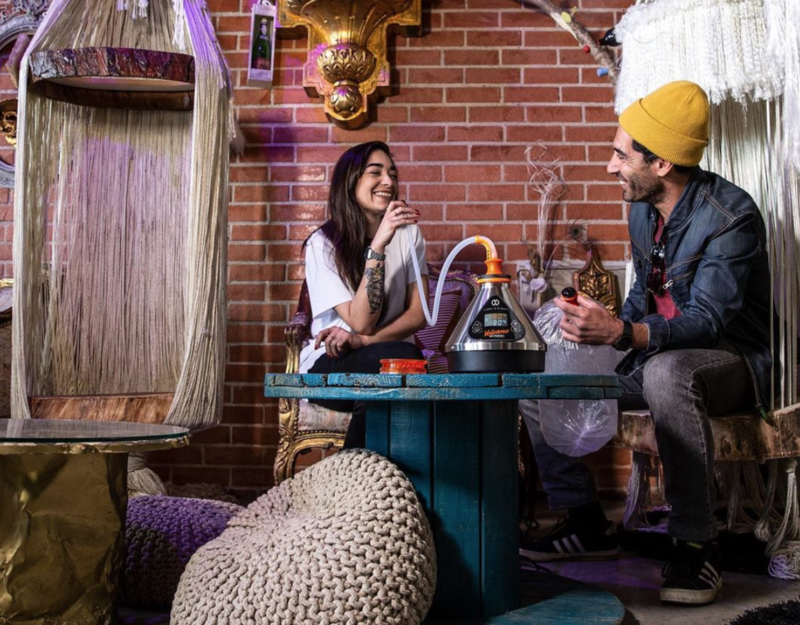 But as you’ll see below, I not only think the Volcano Vaporizer is 100% worth its asking price. But I’d also definitely go out and buy another one if something happened to my current unit – hell, I might even splash the cash on the newer Volcano Hybrid model.

This desktop vaporizer is expensive, yes. But it will hold its value. It also comes with a lifetime guarantee and you will be able to use it for the rest of your life, meaning you’ll never have to buy a vaporizer again.

It delivers the best vapor of any device in its class. It is the #1 choice of all professional dispensaries in Amsterdam and 420 States. And all of its parts are 100% replaceable. With respect to vaporizers, which are expensive anyway, this is literally the first and last vaporizer you will ever need to buy. The Volcano Vaporizer is designed to last you a lifetime. Meaning, if you buy it now when you’re in your 20s or 30s, you will still be using it in your 70s and 80s.

Put in that context, the price starts to make more sense. Like an expensive German sedan, this desktop vaporizer is built with longevity, performance, reliability in mind. Yes, there are plenty of cheaper options available. But none can hold a candle to the OG of the space. This is why every single head shop you go into in Amsterdam has one of these – they’re the best of the best.

Basically, the Volcano vaporizer – whichever model you go for – will provide you will unparalleled vaporization performance. Storz & Bickel, the company that makes it, have been doing this for over two decades, so they really know what they’re doing.

10 Reasons The Volcano Vaporizer is 100% Worth It

1) Design – It’s Incredibly Easy To Use

This is the main thing for me. As complicated as the Volcano looks, it is actually super simple to use. And this makes it truly one of the greatest vaporizers on the planet because ANYONE can use it – and the setup, from installing a bowl to taking a hit from the balloon, takes literally minutes.

Simply add your materials, turn on the power, and watch the balloon fill before your eyes, and you’re good to go. The entire vaporization process literally takes just a couple of minutes. And if you opt for the Hybrid model, you can use the vaporizer in whip-mode, meaning you can attach a hooker-style pipe and vape instantly. This would be the #1 reason to go with the Hybrid over the standard model.

2) Vapor Quality – It’s Unlike Anything Else

The second big thing is the overall vapor quality. Because of the nature of how the vaporizer works, the vapor is smooth and extremely palatable.

It also retains ALL of its flavors, so whatever you vaporize tastes exactly as it should.

And because of the ballon system, the vapor is never too hot. Like the porridge Goldilocks finds, it is just perfect every darn time.

You’re not limited to dry herb materials with the Volcano either – it can handle concentrates as well, which opens up an entirely different range of products and sensations!

Personally, I much prefer using dry herb materials inside it. I’m something of a purist though in this regard. I don’t mind concentrates, but they can be a little too strong for my tastes.

Either way, whatever you’re putting in the Volcano gets vaporized exceptionally well.

If you’re used to waiting for a portable vaporizer to heat up, the Volcano will feel like switching from dial-up internet to high-speed broadband.

This thing vaporizes everything in seconds, filling the ballon in just a few short moments.

5) You Never Have To Worry About Battery Life

Obviously, the Volcano isn’t something you take with you when you go out. It’s a “stay-at-home-vaporizer”, and the big benefit of this is that it is mains-powered.

That means excellent battery life and constant, unwavering performance whereby everything is heated exactly the same every time. 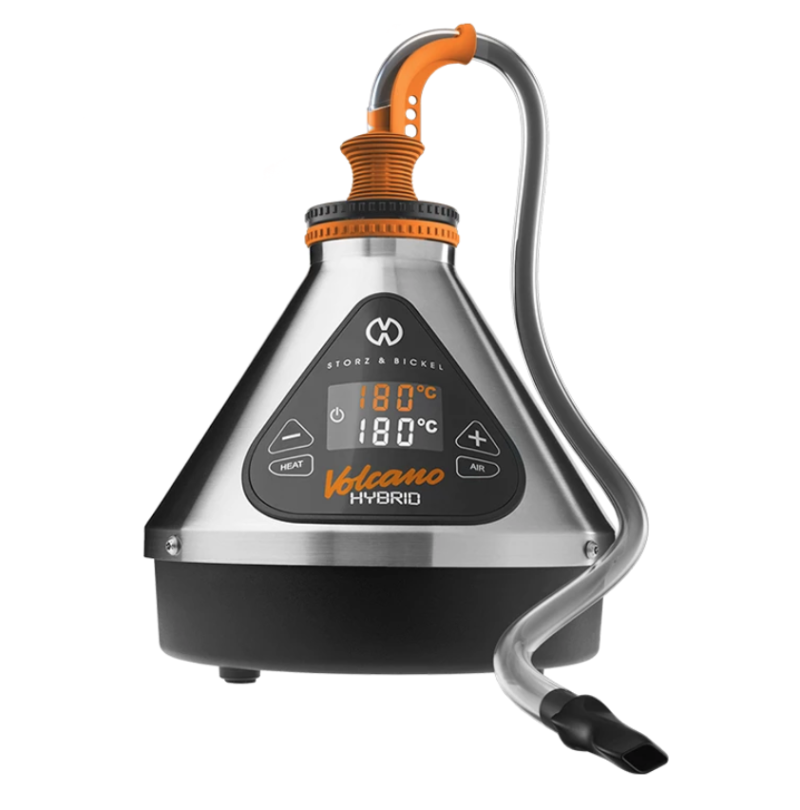 It can go all night, or as long as you need, unlike portable vaporizers which often require recharging after a few hour’s usage. For me, this is easily the biggest benefit of going the desktop vaporizer route.

I do love a good portable vaporizer, especially for when I’m out the house, but for extended sessions with friends (or when you’re on your own), nothing comes even remotely close to a desktop vaporizer.

The Volcano is super-pricey, but like any high-end product – A 4K TV, a high-end gaming rig – it is designed for LIFE (or, failing that a good decade or so).

This is the kind of device you buy and then use until you either drop dead or give up vaporizing the good stuff.

Either way, with this vaporizer you got yourself a friend for life.

7) House Parties/Dinner Parties Will Never Be The Same Again

Trust me, once you break this out at a party of a dinner party, things will never be the same again.

It is perfect in both settings, and because it doesn’t burn anything, people that don’t normally smoke can partake and experience its wonders.

8) All Parts Are Replaceable

It’s German-built and that basically means it is built to extremely exacting standards. Not only that… but all the parts for it are 100% replaceable, so even if you do encounter a problem it is very easy to fix.

9) Your Friends Will Love You Forever

If your friends smoke pot and you get one of these, you’re basically THE MAN.

Friends will flock from near and far to use it, turning your pad into your friends’ #1 hang out spot.

Hell, if you can’t stretch to $599.95 for one by yourself, why not go Dutch with a couple of your pals and split the cost?

This for me, however, is the main benefit of a device of this quality: you will never, ever smoke pot again. Not while this thing is around. Not a chance… 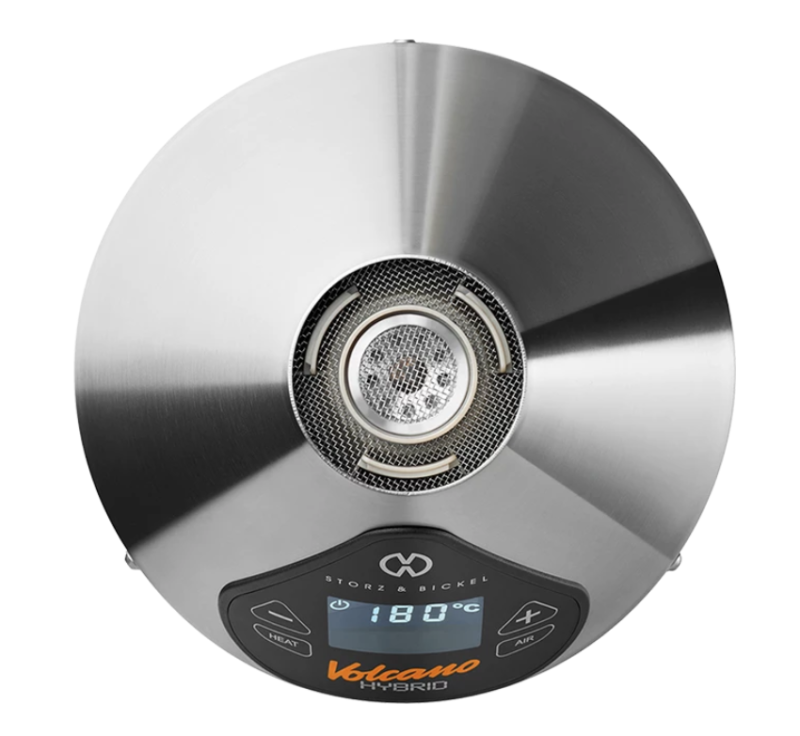 The vapor quality is just too good. Chuck in how easy it is to use, clean, and set up and you’re looking at one of the best investments a pot-head can ever make.

Volcano Vaporizer Specs, Price & Reviews – Everything You Need To Know…

As with most things though: I started looking at bigger, better options.

But if you want something BIGGER, read on…

And when it comes to powerful, desktop vaporizers there is only one name that constantly comes up again and again – Volcano Vaporizer.

The Volcano ($599.95) is a desktop-style (meaning non-portable) dry herb vaporizer.

It’s big and it’s made for use in the home, not while you’re out hiking or camping.

For this reason, it is the exact opposite of the bulk of vaporizers I own and have tested.

Both the PAX 3 and the DaVinci IQ are handheld devices designed for use on the move.

But what if you’re looking for something… bigger? Something… truly monstrous?

Simple: you go with the Volcano. Or, if you want something cheaper, the Arizer EXTREME Q – it’s a desktop vaporizer but it’s a full $370 cheaper than the Volcano!

If you haven’t heard of the Volcano before, allow me to explain.

Like the DaVinci IQ and PAX 3, it is a vaporizer. It does not burn your dry herbs (weed). Instead, it uses hot air to vaporize them.

This vaporized air is then sent into a ballon and you huff the vapor from it. Simple, right? 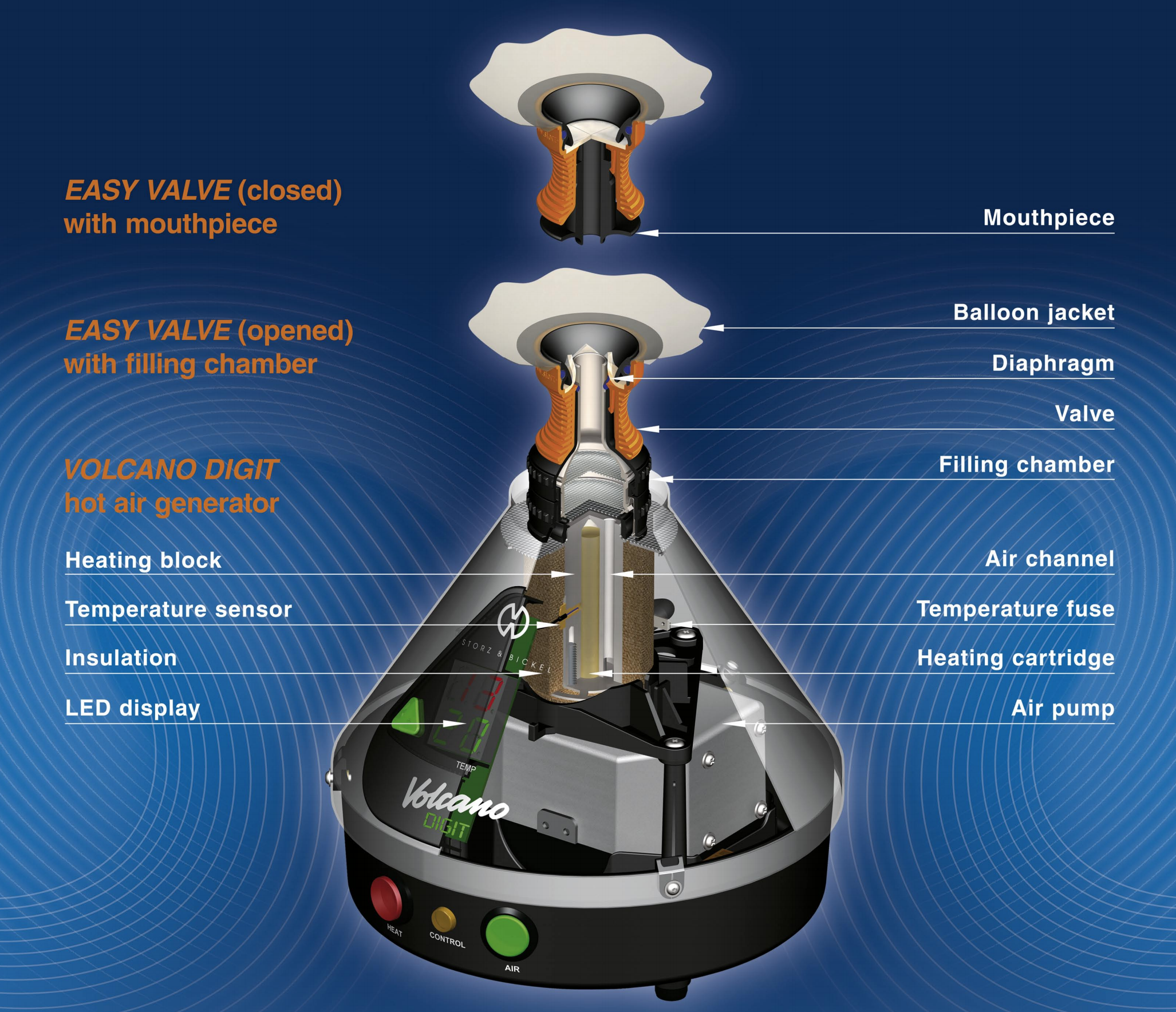 How It Works – Pretty Cool, Right!

Well, that’s how it works at its most basic level. However, there is a myriad of settings you can use to customize how the dry herbs are vaporized.

The ballon also comes with a valve, so you can fill it up, take a huff, and then close the valve saving the contents for later.

How much does all this awesomeness cost you?

That’s still a lot of money, but spread over the course of, say, 10 or 20 years, it’s really not that much.

These units are designed to last forever, so think of a device of this type as more of an investment than an expense.

They also hold their value too, so you can always resell it on eBay if needs be later down the line. 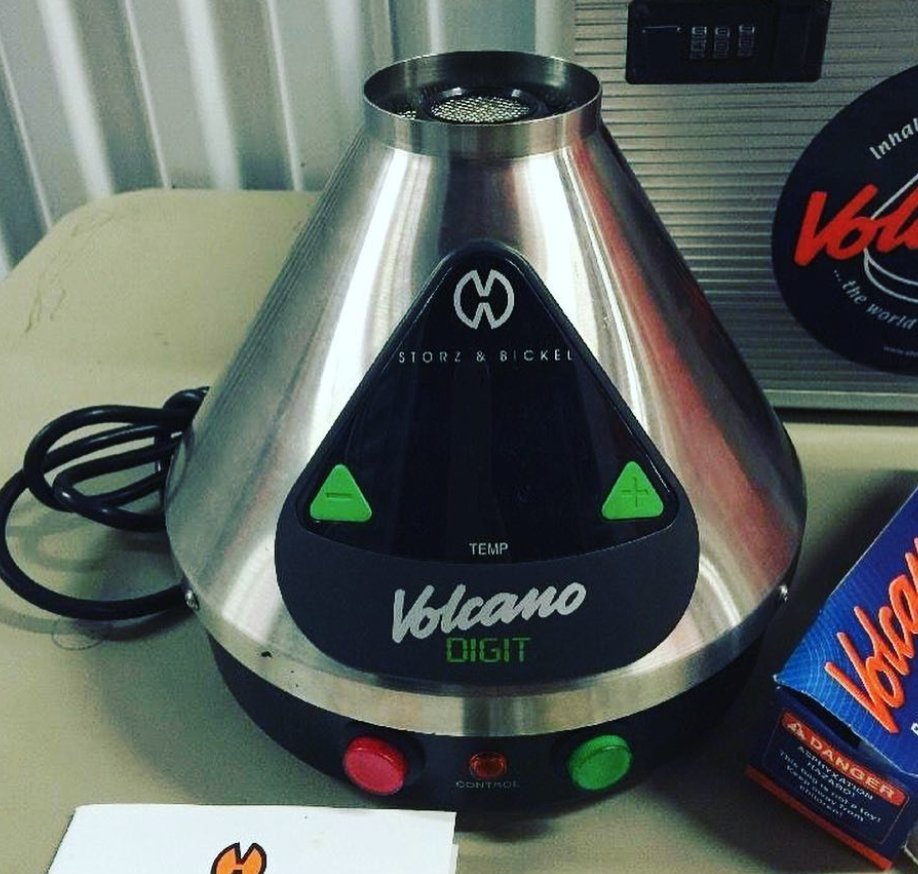 This device clearly is not for everyone. The price is prohibitive. But if you are someone that really likes vaping weed, then the Volcano is more of an investment than anything else.

You’ll get better quality vapor from it, it produces plumes of the stuff, and it will likely be the last vaporizer of its kind you’ll ever have to buy.

I have one on order right now; it should be with me later this week.

And that means I’ll be having a Volcano Party this weekend.

All being well, I’ll have some of my own comments to make about it then, so keep an eye on VapeBeat’s social feeds for that!

I’ve been reading tons about this device and nearly every review I’ve read has been glowingly positive.

The main reason I want one is performance and battery life; I want more vapor, vapor that tastes better, and I don’t want to have to worry about battery life when I’m at home. 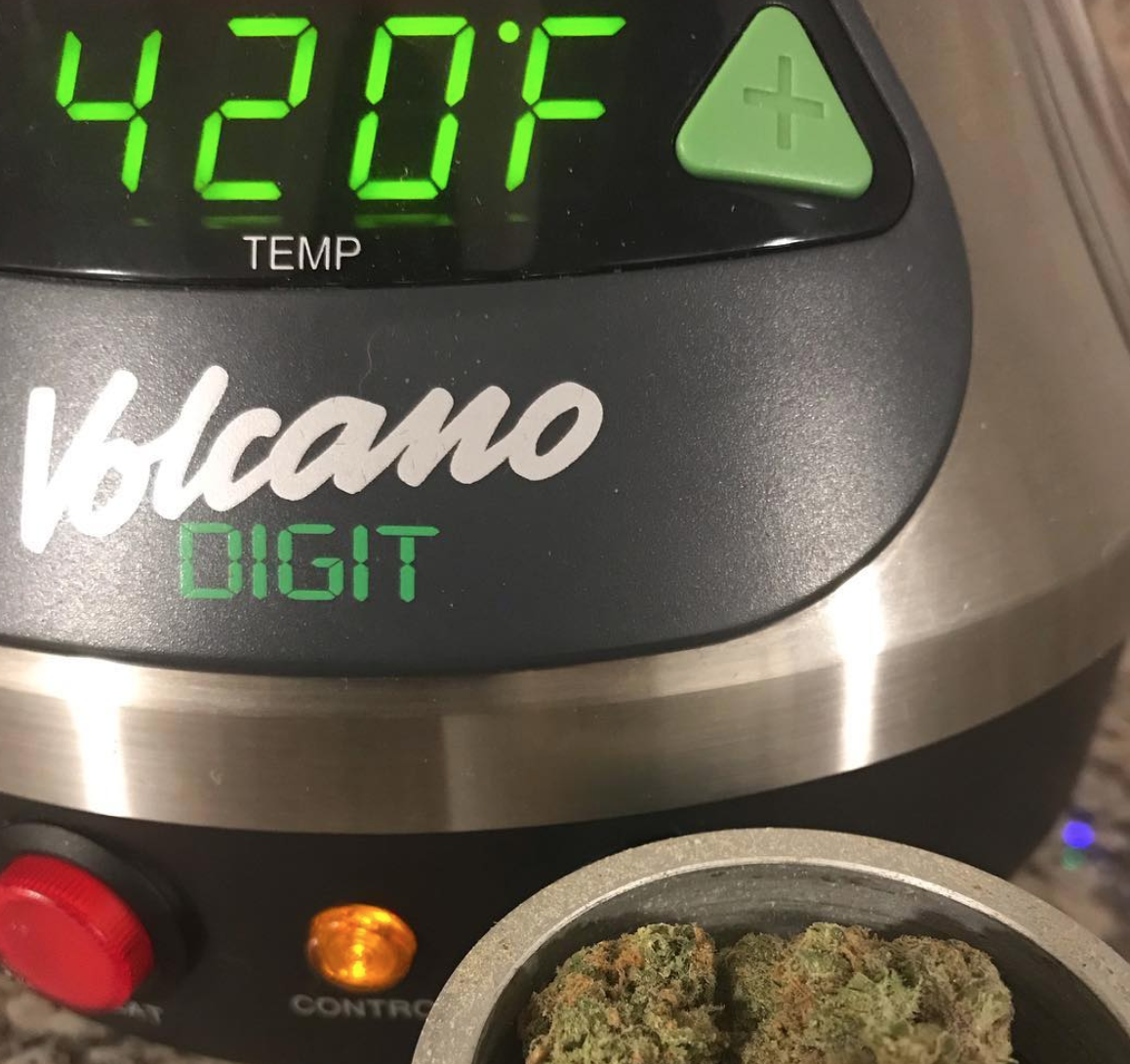 You Have Two Options: Digital (This One Pictured) And Analog (Which Uses A Dial For Setting The Temperature)

The Volcano basically solves all of these problems, albeit for a rather hefty premium.

But then when you look at it in all its metallic awesomeness, you kind of understand why the price is so high – it looks like something Buck Rogers would have in his house.

I’ve included a few of the best reviews I’ve found for the Volcano below. They’re all from sites I know and trust.

“The Volcano is currently my highest rated desktop vaporizer and in my opinion, it still holds the title for the best desktop vaporizer. It’s still going strong over the course of five years and produces the best vapor quality of any vaporizer I’ve tried” – Vaporizer World.

“I have been using mine regularly since early-2009 and it still performs and looks like new. You rarely have to clean any parts of this vape, it’s the cleanest one I own, all you do is lightly brush out the herb chamber after each session” – VapeCritic.

“In my opinion, the Volcano is an excellent option for the medical marijuana patient who consumes a lot of cannabis and for the dedicated cannabis enthusiast ready to commit to a healthy smoking alternative” – Stoner Mom.

Bottom line? Is The Volcano Vaporizer Worth It?

The Volcano is definitely not for everyone. First, you need to have $499-$600 laying around. Second, you need to REALLY love your vaporizers.

If that’s the case, then the Volcano Vaporizer, according to pretty much everyone, is the best desktop vaporizer around.

And it doesn’t matter whether you’re talking about flavor, ease of use, or vapor production – the Volcano is apparently a master of all things! 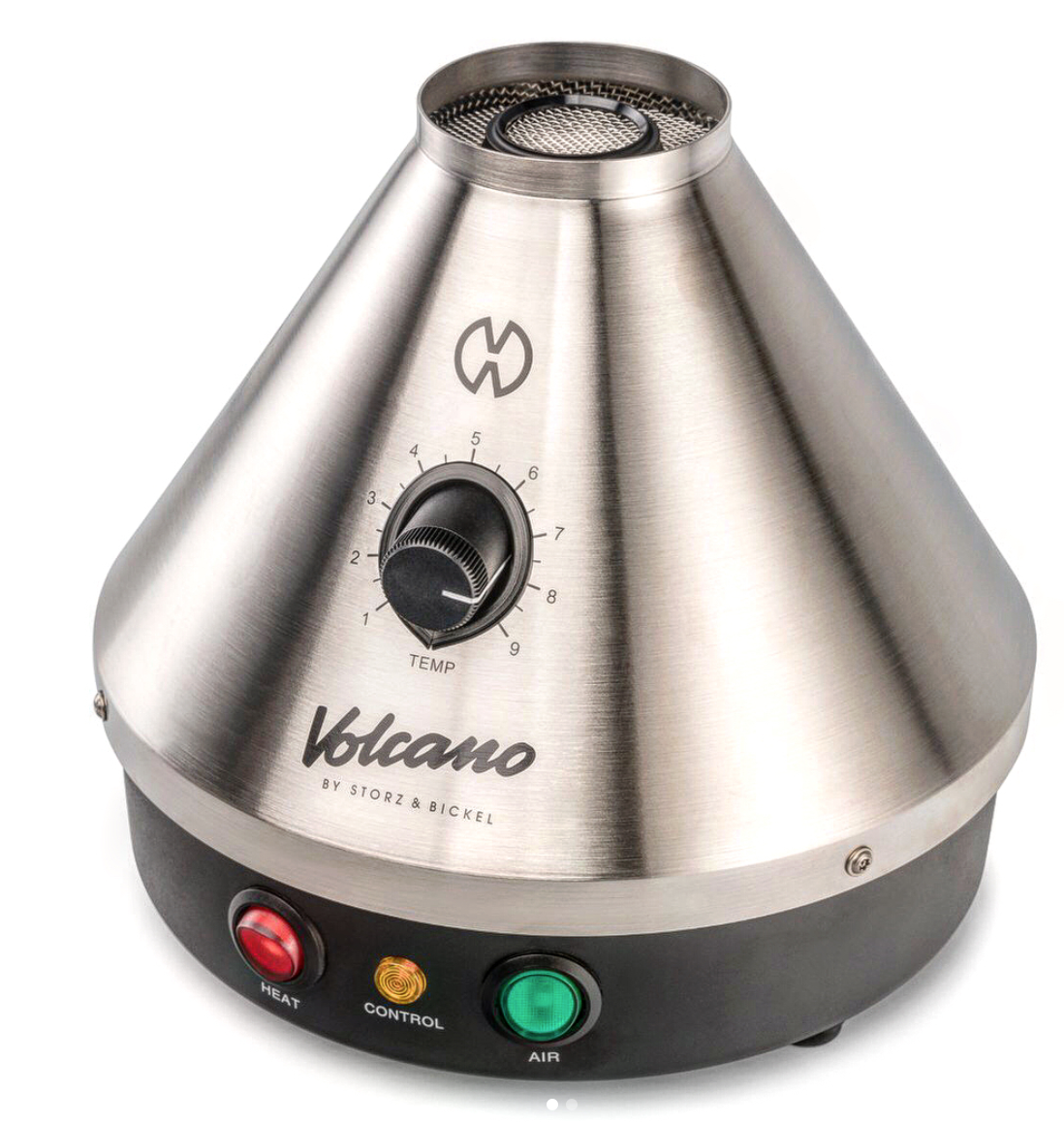 This is why I went with it over a cheaper alternative.

I wanted the best possible desktop vaporizer, something that I could use for the rest of my life, rather than buying a cheaper option that’d break after a year or two.

For this reason, and a bunch more, I was willing to take a punt on this mega desktop vaporizer. 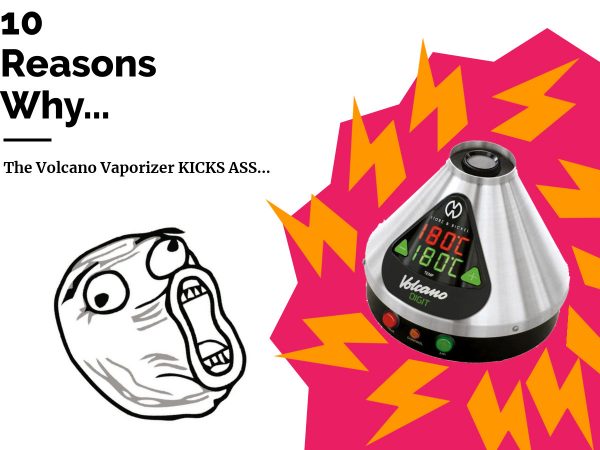