The Voopoo Vinci POD, the newest iteration of the successful Vinci AIO, has just landed and I’m not convinced that Voopoo is heading in the right direction. No matter how good this pod device is, dropping the PNP system for POD devices makes little sense and is the Vinci POD kits’ biggest letdown.

The PODs last for ages and flavor is even better than the Caliburn, which is quite the feat. The airflow works unbelievably well, probably the best in class, and is reason enough to put the Vinci POD in your collection. Let’s not forget the improved battery life and stellar build quality and you start seeing that the Vinci might just be the new king.

View Latest Prices In Your Location ↗

The Voopoo Vinci POD kit has launched with little knowledge or hype. It’s been fairly quiet on the marketing side, which is strange for a Voopoo product, especially if it appears they are heading in a new direction. The Vinci POD kit aims to replace the Vinci AIO devices (or bolster it) and while it’s got one major flaw, it’s still a fairly solid device.

First impressions are certainly good. The Vinci POD feels solid in the hand and looks stunning, especially in Aura silver. It retains the old Vinci AIO vibe, even though it’s a more slender profile, it feels heavier and bulkier and as such, premium.

The POD is a drop-in system again, same as the older Vinci, but with non-replaceable coils, a massive step back for Voopoo. The POD holds 2ml of e-liquid, 2.5ml less than the Vinci AIO, which is to be expected given the narrower dimensions.

The Vinci POD has no buttons or screens, much like the Vinci Air. Instead, it’s draw activated only and makes use of the light-up Gene logo to display battery status and errors, a neat touch that makes the device feel premium, almost Apple-like. The battery status has 3 levels, green, blue, and red and will flash red for any potential errors.

The airflow on the Voopoo Vinci POD Kit quite unique, but perhaps not to everyone’s taste. As with the Caliburn, there are 2 airflow holes on each side, but the Vinci POD allows for adjustment on one side via a slider. The slider clicks to fully closed, keeping only the left side open, but opening the AFC slides down to allow for fine adjustments. The clicky slider is a useless gimmick, but man is it pleasing to play with.

Filling the POD is similar to previous Vincis’. A rubber bung right beneath the drip tip with an extra-large fill hole makes filling up a breeze and a tight seal means practically no leakage. Speaking of drip tips, the piece on the Vinci is a fairly large duck-bill affair and super comfortable. Due to the weight of the device though, you can’t simply hold the device between your lips as you would with say a Caliburn or Juul.

It makes no sense not to compare the Vinci POD to the Caliburn seeing how obvious a competitor it is, that said, we need to keep in mind that the Caliburn is anything but new on the market, although, the Caliburn A2 is pretty much the same thing. That said, performance is damn near spot on to the Caliburn, with a few improvements.

First off, the Vinci POD 280mAh of battery power over the Caliburns 520mAh. While this may not sound like much, in real world terms would give you a full day on the Vinci where the Caliburn woud offer half a day on a charge at best. The USB type C charging port is also a huge step up over the Caliburns Micro-USB port.

Flavour from the Vincis’ included 0.8ohm pod edges out the bog-standard Caliburn pod by a smidgen. According to Voopoo, there’s a range of coils spanning from 0.6 to 3ohms, but these are not included in the box and as such no tested. I expect them to perform the same as the rest of their range of coils; decently. Coil life is pretty similar, giving the Vinci POD an easy 30ml on overly sweet e-juice.

Now, unfortunately, I need to point out the most glaring fault of the Vinci POD here, the lack of PNP integration. It makes absolutely no sense here, the Vinci POD Kit is the perfect device to make use of the award-winning ecosystem Voopoo has worked so hard on. Dropping support for it feels like a cash grab, to put it bluntly. I can only imagine how great this device would be with the PNP RBA or even 1.2ohm coils.

Credit where credit is due though, the airflow control is spot-on. At it’s widest setting, it’s ever so slightly airier than the Caliburn and closing it down all the way gives you that perfect tight draw that most of us felt lacking in the Uwell offering. Voopoo absolutely nailed it here. Even if the AFC did nothing, the clicky slider is so much fun to play with and almost worth the price of admision.

Let’s put aside the blatant attempt at cash hoarding with dropping PNP support and we’re left with a device that is actually pretty darned good.

The PODs last for ages and flavor is even better than the Caliburn, which is quite the feat. The airflow works unbelievably well, probably the best in class, and is reason enough to put the Vinci POD in your collection. Let’s not forget the improved battery life and stellar build quality and you start seeing that the Vinci might just be the new king. That said, damnit Voopoo, why did you drop PNP support?

So if you’ve not invested heavily into the Voopoo ecosystem, the Vinci POD may be the perfect pocket device for you. If you have though, the Voopoo Vinci Air could actually be a better choice, even if the airflow is a bit wonky. 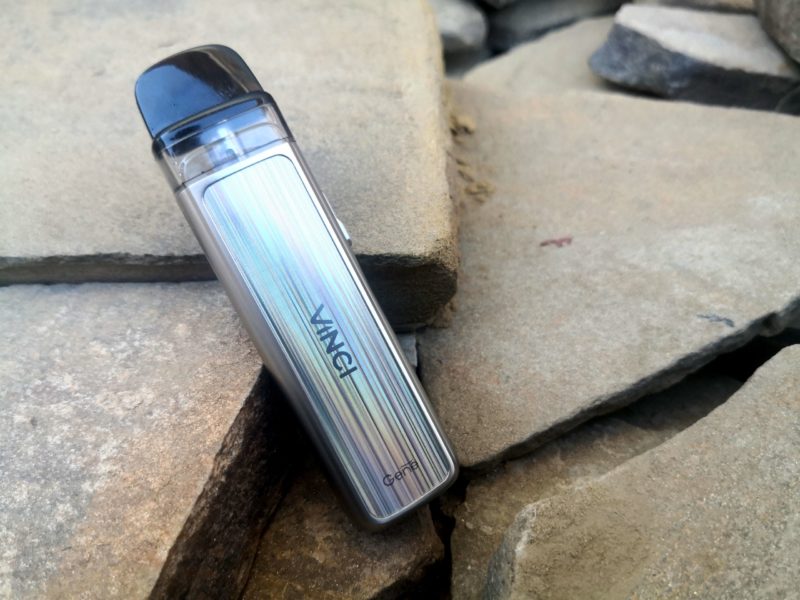