What is The VOKE E Cig & Can You Still Buy It?

The VOKE is not a traditional E Cig. It doesn’t produce any vapor. Instead, it is marketed as a nicotine inhaler. But can you still by VOKE in the UK? Here’s everything you need to know…

VOKE garnered itself plenty of headlines in the UK back in 2020 when it became the first “e cig” to become officially available on the NHS. I say, “e cig”, but VOKE isn’t really an e cig – it’s more of an inhaler, a nicotine inhaler.

There is no vape juice or e liquid inside the VOKE; it works, instead, by the same process as an inhaler. VOKE is designed to look like a cigarette from top to box. It even comes in a box that looks just like a pack of fags, complete with removable plastic wrapping. 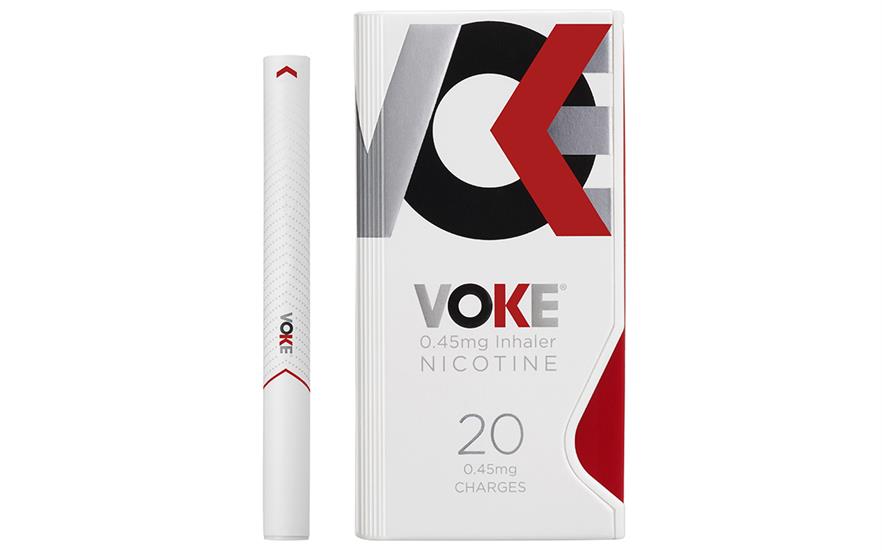 All of the nicotine used in the VOKE is stored in the box. Each box has 20 refills inside it, so you get a 20 pack’s worth of nicotine from each unit. And the price? It costs £11.99, so it ain’t cheap. And the experience of using it isn’t exactly pleasant – there’s no vapor and no real flavor to speak of. It reminds me of those cheap-ass nicotine inhalers you get in Boots.

VOKE is designed to help people quit smoking, that is the entire point of the device. VOKE’s marketing material claims, “it won’t quit until you do”, but one has to ask? Is VOKE better than a more traditional e cig? I really don’t think it is – the nicotine is low, so you have to take A LOT of hits to satisfy your morning nicotine pangs. Add in ZERO flavor and you’re not in a good place.

Is it better than a patch? Maybe. But given the choice of a nicotine patch and a VOKE for a long flight, I think I’d go with the nicotine patch and a few tabs of melatonin washed down with a couple of G&Ts. My advice? If you’re seriously looking at this product, go with the UWELL Caliburn instead and get yourself some nice nic salt vape juice. You’ll be far happier and more likely to stay off the fags long-term.

Want another analogy? The VOKE is a bit like trying to give up coffee and, instead, drinking hot water and popping a Pro Plus as a replacement. Yes, some its constituent elements are similar (hot water for the coffee, caffeine in the Pro Plus and nicotine for the VOKE) but the overall experience of consuming them is totally different. And not in a good way, either…

In fact, the only reason you know about this product – and not a vastly superior product like the Blu e cig or the UWELL Caliburn – is because the company behind VOKE, Kind Consumer, managed to get the NHS to pimp its product in hospitals around the UK which, of course, generated plenty of news stories. But the reality, beyond the headlines, is less exciting: the VOKE is a super-basic NRT that is more like nicotine gum and patches than traditional e cigs.

And as we all now know, vape devices are much better at stopping people smoking than NRTs like nicotine gum and patches. The difference – as shown in multiple studies – is like night and day. If you want to quit smoking, and you cannot do cold turkey, vaping is the #1 tool at your disposal. And right now, the UWELL Caliburn is probably the best vape on the market for beginners – it’s also really cheap to buy too, as you can see here.

How Does VOKE Inhaler Work?

As noted above, the VOKE is not an e cig – nor is it a pod vape or even a vape. It is an inhaler. There is no vape juice and no refilling required. Everything you need, the device itself and your nicotine supply, is included in the box.

To fill up the “inhaler” with nicotine, you simply press it into the box and this process moves nicotine liquid from the box into the VOKE itself ready to be inhaled. Confused? I was a bit too. But here’s a diagram showing exactly how the VOKE works (and how it is different to a traditional e cig). 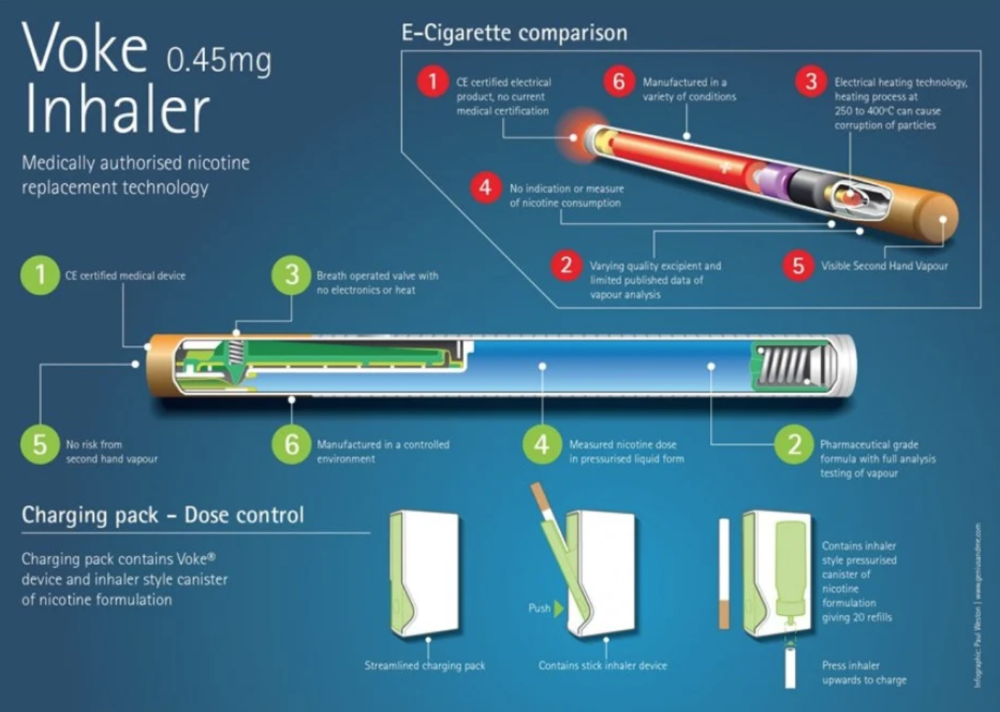 Once you’ve topped up the VOKE, you’ll get maybe 5 to 6 puffs before it is exhausted and requires a return to the box for more. Again, this isn’t ideal. I much prefer the IQOS system to how VOKE works. And with IQOS, again, you’re using an FDA-approved vape that uses actual tobacco pods. But the IQOS is a heat-not-burn device, so you don’t get all the nasty chemicals.

IQOS is available in the UK too and, for the most part, is a vasty better option than a VOKE. You’ll get a more pleasant experience using it, as it uses actual tobacco to create its vapor, so if you miss the taste and smell of cigarettes, it is about as close as you can get to the real thing. Me personally? I’d still rather have a pod vape like the UWELL Caliburn with some tasty vape juice in it.

How strong is the VOKE with respect to nicotine? As I noted earlier, it is VERY weak – you’re looking at just 0.45mg per session which is very low. If you’re coming of the smokes, and you smoked more than 10 a day, this level of nicotine simply will not cut it; you’ll need at least 10-12ML strength vape juice. Or, Nic Salts which go all the way up to 20MG in strength.

Is The VOKE Simple To Use?

Yes, the VOKE is very simple to use. But so are plenty of other vapes – like the IQOS and the UWELL Caliburn. Simple vape products are great, especially if you’re new to vaping, but they have to perform well in other areas too. You want decent battery life, for one, nice flavor, and the ability to swap out the vape juice and try new flavors. You cannot do any of this with the VOKE.

As I mentioned earlier, you can now pick up vastly superior vapes in Asda, Spa, and other supermarkets in the UK. Hell, you can even by JUUL in Sainsbury’s now. And given this level of choice (meaning competition) I cannot fathom why anyone would choose the VOKE over, say, something like a VUSE, JUUL, or Blu e cig. If you want simple, these vapes are what you should be looking at.

If you want simplicity with performance and the ability run vape juice of your own choice, something like the UWELL Caliburn or the newer UWELL Caliburn G is what you should be looking at. More often than not, in the short, medium, and long term, vapes like the Caliburn are cheaper to run and much less hassle to maintain and use.

Can You Still Buy VOKE In The UK?

After a metric rise in popularity, thanks to successful funding rounds and a partnership with the NHS, VOKE is now – apparently – dead in the water. According to multiple news sources, the company behind VOKE – Kind Consumer – failed to secure required investment and has ceased operations, losing its investors tens of millions of pounds in the process.

If you go to the company’s official website, the only place you can order and buy VOKE from, all that you’ll see is a landing page with the following statement:

Due to Covid-19 and the current financial climate, we are unable to accept any orders. If you have placed an order that has not been fulfilled or refunded or if you have any other enquiries or require any support please contact us on info@kindconsumer.com.

Please continue on your journey to quit smoking and seek expert advice from a medical profession if so required.

My guess? VOKE is cooked. You cannot operate a company without funding and, if reports are to be believed, plenty of the company’s big fish investors aren’t too happy about how the company was operated. And who can blame them? The company has apparently lost almost £10 million of investor money.

Should You Use VOKE or A Proper Vape?

VOKE was a novel idea that was – initially – executed well. The company, however, did court controversy when it cited EVALI during its funding campaign which irked a lot of people in the vaping community and industry at large. Still, it managed to secure distribution in the NHS – a huge win – but, somehow, it all went Pete Tongue…

And given the fact that you can no longer buy VOKE in the UK via the company’s website, I’d argue that tells you everything you need to know about whether or not you should buy the VOKE in 2021. Me personally? I wouldn’t touch this thing with a bargepole attached to a crane. It is completely not my bag. I like vapor. I like flavors. And I like decent battery life and value for money.

The VOKE delivers none of these things, so, for me, it is a HARD PASS. Do yourself a favor, if you’re in the market for a solid-yet-simple vape device for quitting smoking, pick up the UWELL Caliburn. I guarantee you’ll love the device and, with the right vape juice, you’ll never want to smoke again. And if you’re not, drop me an email, tell me I’m wrong, and I’ll help you find a vape that works!