My introduction to VooPoo was a very pleasant one.

A couple of years ago, the VooPoo DRAG turned up on my doorstep unannounced.

I unboxed it, not knowing what to expect, and then discovered this awesome, metal box mod.

It was a brilliant mod, easily one of my all-time favorites.

The GENE chip inside was the star of the show, however; it performed fantastically in every regard.

In the end, I used the VooPoo DRAG for about 9/10 months solid.

This (among other things) is why it is currently ranked #1 inside our Best Vape Mod Guide.

It became my de facto vape mod. And that doesn’t happen very often; not when you have about 60 mods in your house!

And now I have a new VooPoo mod in my possession; the VooPoo VMATE which is a lightweight mod that is very stylish and, importantly, packs in VooPoo’s excellent GENE chip.

So how did I get along with it? Read on and find out! 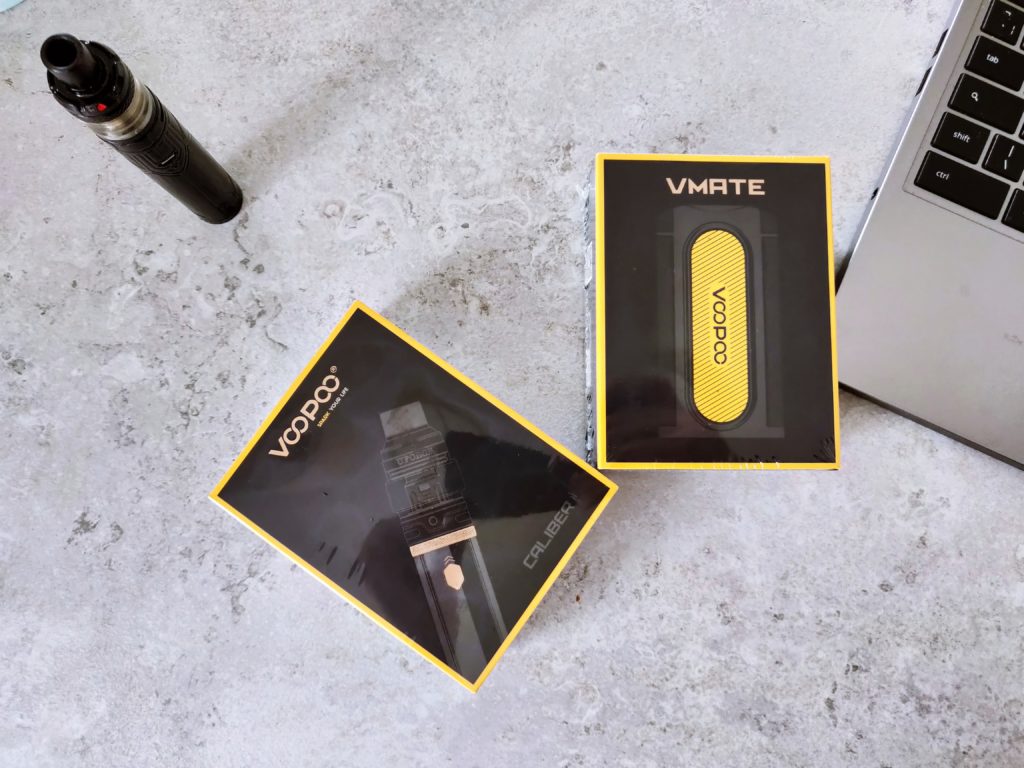 The key thing about the VooPoo VMATE is its design.

More specifically how it has been designed. 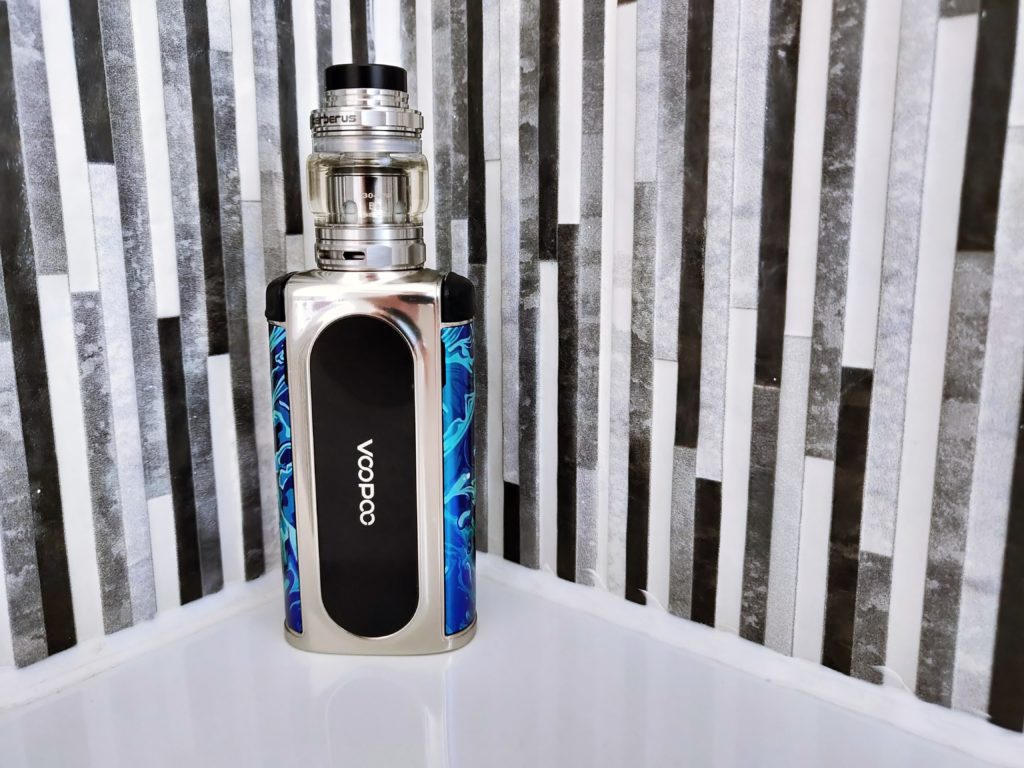 This is the BIG IDEA behind the VooPoo VMATE – bring all the power of the VooPoo Drag and AlphaONE, just inside a smaller, more lightweight chassis.

The VooPoo VMATE is super-light, weighing in at just 100g.

That’s A LOT lighter than nearly all of its contemporaries (and by quite a margin too).

VooPoo also claims there is only 10% wasted space throughout the entire design of the mod. 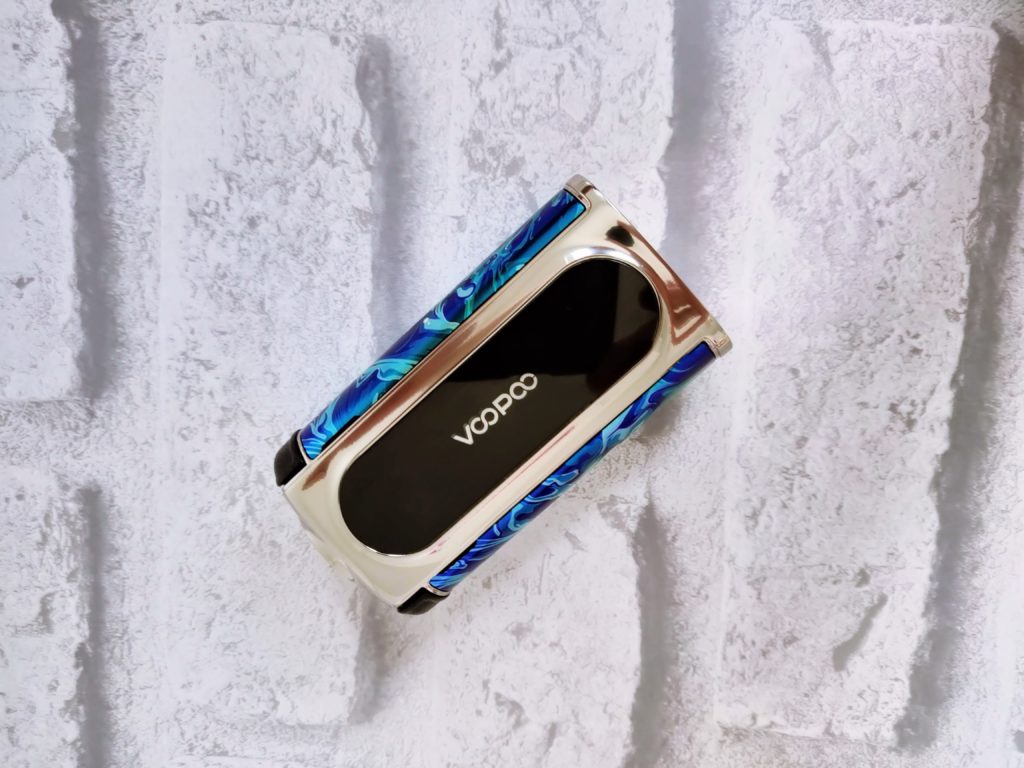 The rest of the mod’s physical attributes are pretty spartan; you have a big display on the front, a solid, blacked-out back panel, the fire key and power rocker are located on the top to edges (more on this in a bit), and a USB port just below the display.

I do like the way this mod looks and feels; it’s light and it looks premium.

One issue I do have, however, is to do with the removable battery doors. 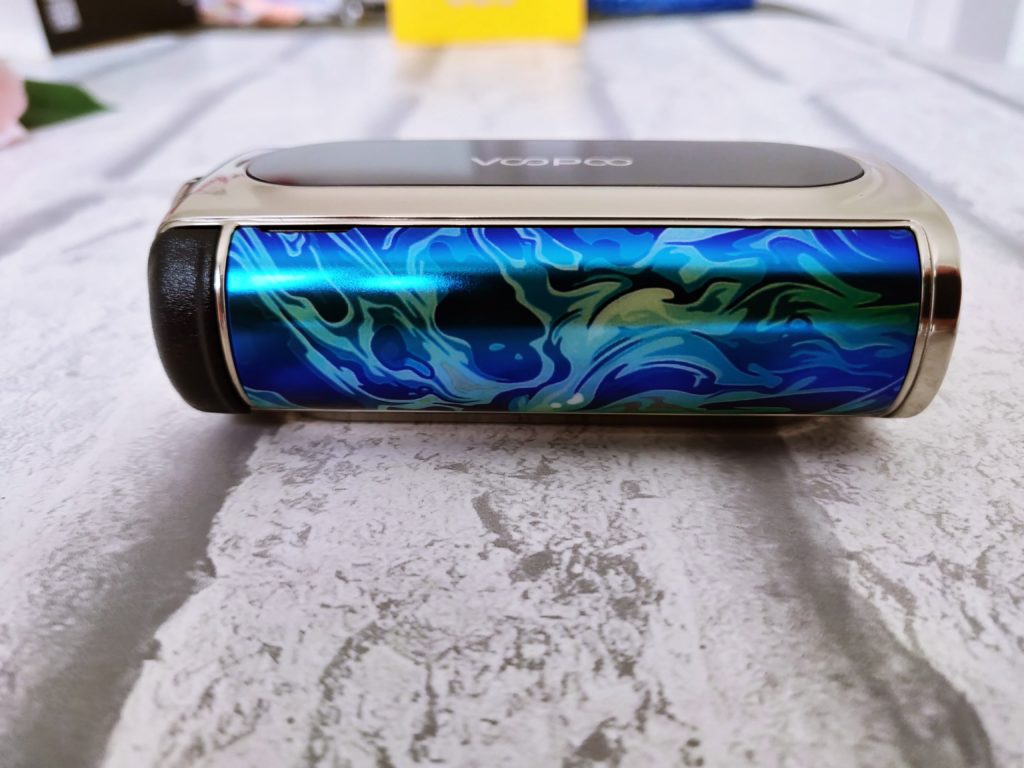 The main thing is that they’re a little too fiddly to get back on once you’ve taken them off.

Granted, this is a minor grumble but it is definitely something that stood out to me right away.

The battery doors are also switchable, so you can further customize the look of your mod like you can on the Vandy Vape Pulse Squonk Mod.

Right now, you have the following options:

Another weird thing about the VooPoo VMATE’s design is the button placement – they’re on the top of the mod, either side of the tank.

I’ve been using the mod for a couple of weeks now, and I just cannot get used to this style of button placement.

I keep on hitting the power rocker when I mean to hit the fire key and vice versa. I thought I’d get accustomed to it after a while but even now, after two weeks of usage, I still find myself doing it.

This point is 100% subjective, though.

You might love the button placement. I just happen to find it a little awkward. Plus, I’m testing about six mods at the same time too, which doesn’t help. 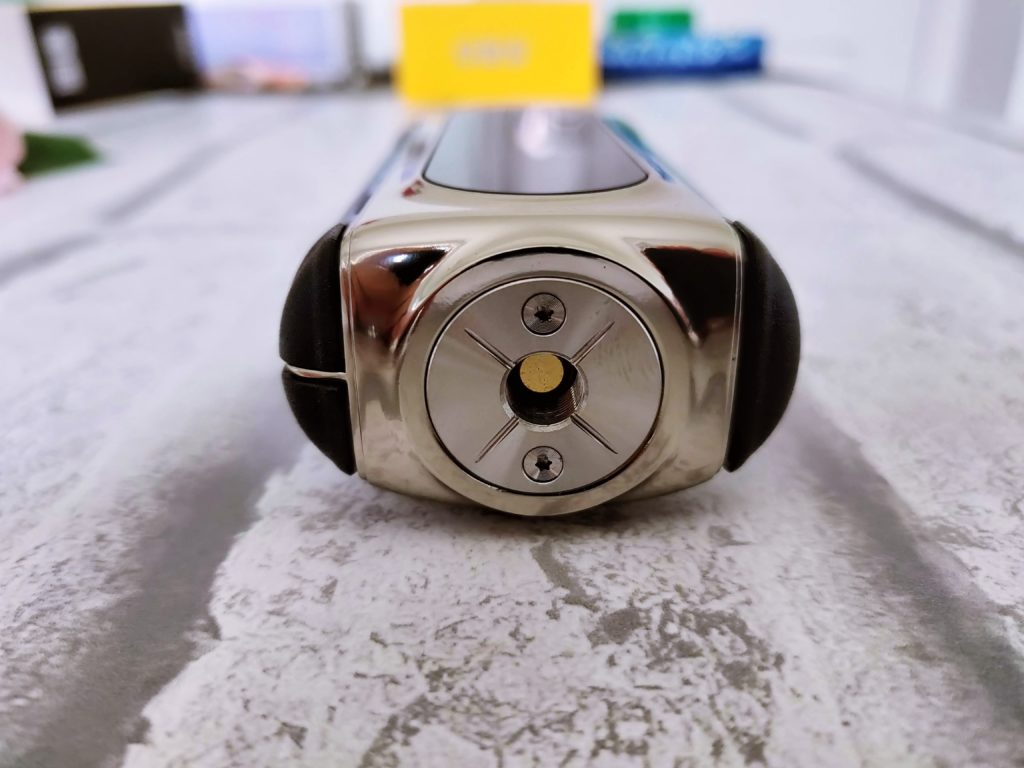 I’ve used mods with funky button placements before (Augvape V200) but I always got used to it in the end.

The VooPoo VMATE just won’t log in my muscle memory and seems to be the exception to this rule.

Still, don’t let this put you off. As I said, button placement is always a massively subjective issue. For me, it’s a negative, but for you, it could well be a positive.

When it comes to performance, the VMATE packs in a new version of the GENE chip called GENE.FAN.

This iteration of the GENE Chip is dust resistant and brings with it a bunch of updates, such as improved safety features, even faster ramp-up times, and improved TC vaping.

The original GENE Chip was no slouch and the GENE.FAN feels very much like the original – ultra-powerful and super efficient.

I didn’t notice a massive difference with ramp-up times, but then the original was so quick it’d probably be impossible to accurately measure this.

It definitely hits like a VooPoo mod anyway. As soon as you depress the fire key, your mouth is filled with vapor. It really doesn’t mess around in this regard.

With TC, you have plenty of latent power. Everything ticks along really nicely and to my eyes appeared to be very accurate. 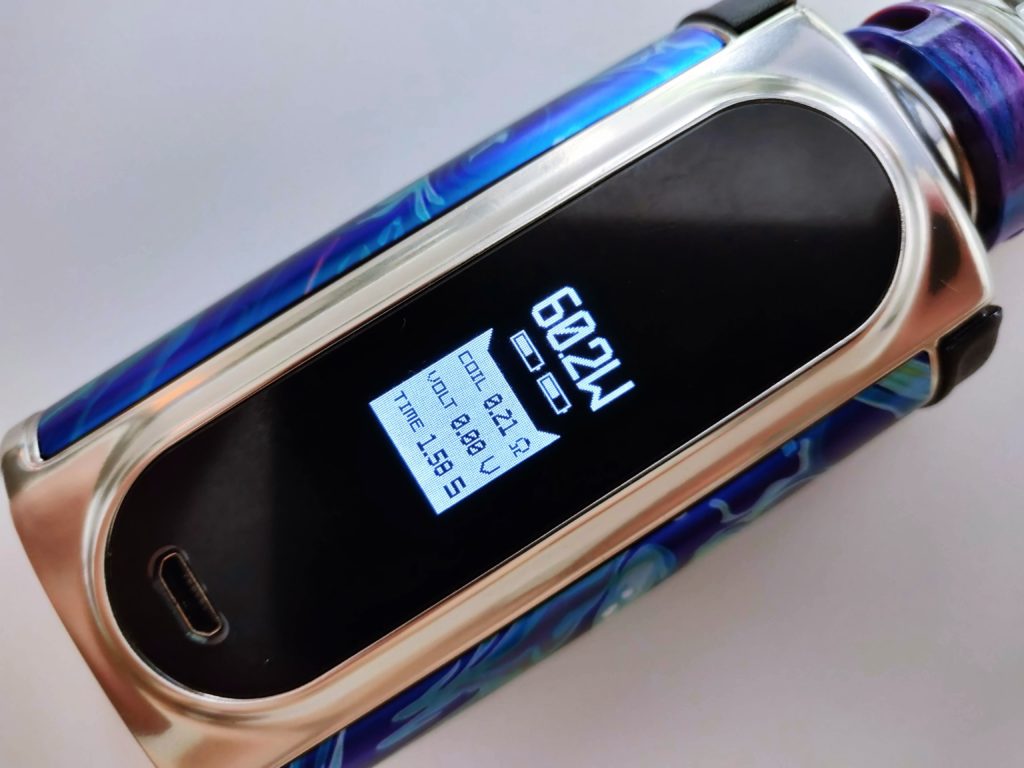 As regular readers know well, I don’t do much TC vaping. But I didn’t have any issues with this mod during my testing in this context.

As always, if TC vaping is your thang, you’re always going to be better off with a DNA mod. They deliver 97% accuracy – a market-leader in that context.

Overall, the VMATE mod performed just as I expected: it was consistent, reliable, powerful, and, generally speaking, a joy to live with and use every day.

Before I wrote this, I was trying to come up with some negatives about this mod. But the only thing that stood out to me was the battery doors and the button placement.

Everything else – meaning: the important stuff – is all very impressive, indeed.

The powertrain in this thing is ridiculous. It feels and looks like a sportier, more refined version of the DRAG.

The GENE chip, once again, shines in this context.

With two, fresh 18650 cells installed, I ran the VMATE mod for a day and a half at 60W, using the FreeMAX Mesh Pro tank.

This is very good, in my experience. 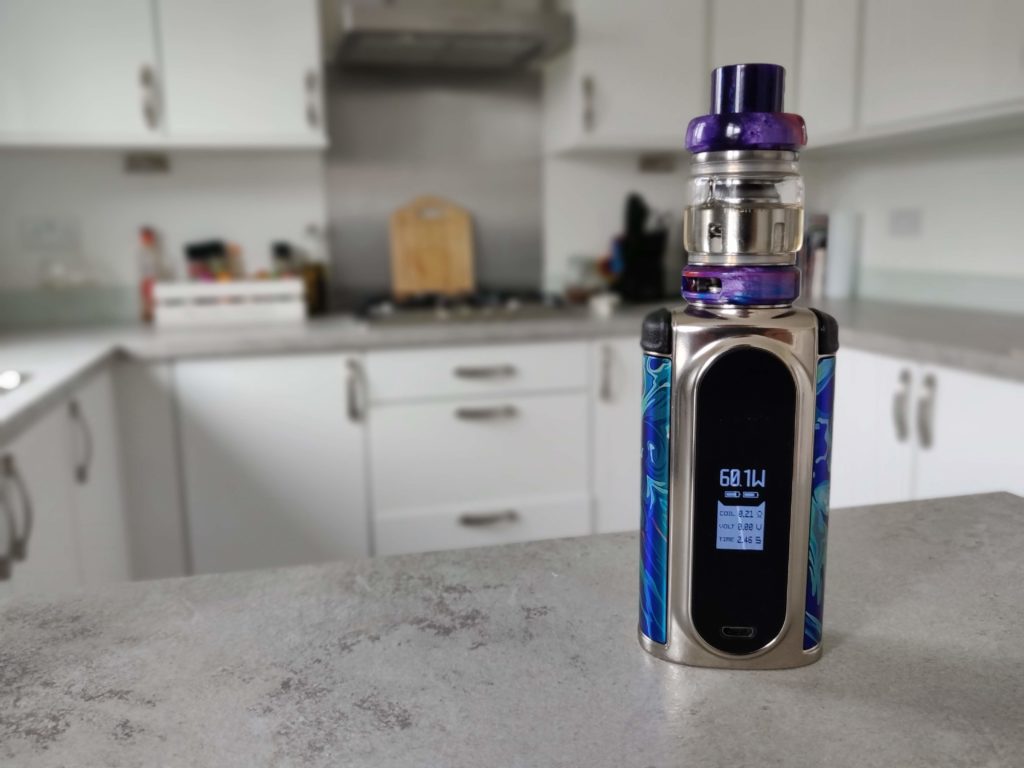 Most mods will struggle to get through an entire day on a single charge, but the VooPoo VMATE did it with ease – and even had some left over the next day.

This tells me two things: 1) the VMATE manages power very efficiently, and 2) VooPoo is really pushing down on battery performance, as this mod is noticeably better than the DRAG.

Bottomline: if battery life is important to you, you’re in very good hands with the VooPoo VMATE. 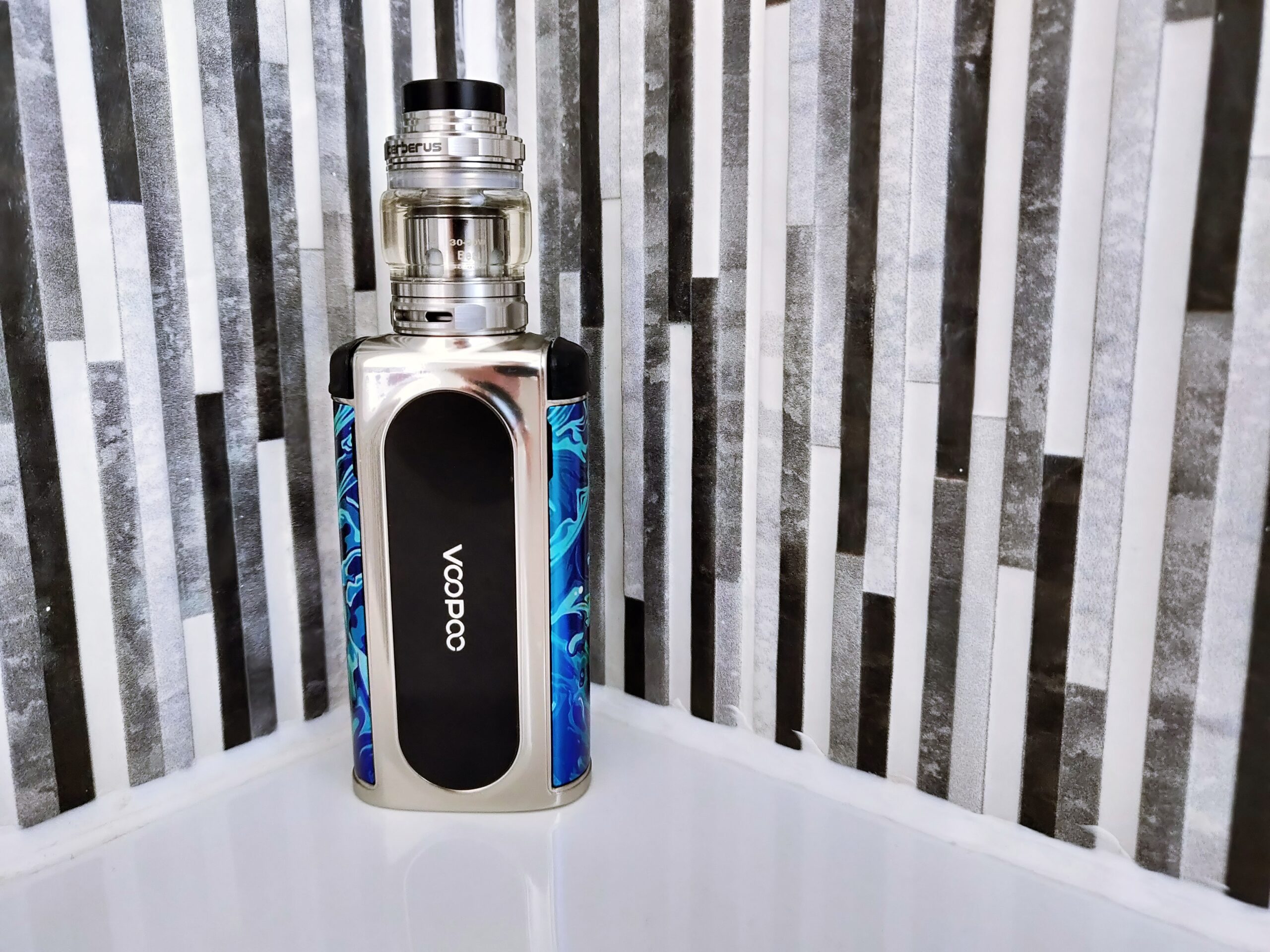