The Uwell Caliburn has long been the king of POD systems, but the Oxva Xlim offers enough to not only compete for the top spot, but solidly wipes the floor with the Caliburn. Fantastic coil life, enough coil options and magnificent build quality are but a few of what makes the Oxva Xlim great.

We’re all getting a little tired of pod systems, not because of the abundance of devices available, but because there’s nothing new that can be brought to the market (sensibly). We’ve seen it all, from low resistance coils to finger-print sensors. The market is fully saturated and manufacturers have noticed the steady decline in purchases. For me, this isn’t great news, I absolutely love low wattage, compact and stealthy pod systems that can deliver a kick to the groin on each draw. Luckily, I’ve found, what I consider to be, the end game of pod systems and that’s the Oxva Xlim.

Oxva aren’t exactly new to the market, but remain a fairly unknown brand, which I find odd, as I’ve had nothing but praise for them. Remember the Arbiter RTA? How about the more recent Arbiter 2? The Origin? These were all amazing products by Justin Lai (previous head designer of the phenomenal Geekvape Aegis) and his touch is evident in the Xlim.

The uninformed will likely not be able to tell the difference between the Caliburn and Xlim at first glance. Apart from the size and screen, the design is very similar. It stands to reason, as this design is arguably the best for battery size and pocketability.

The screen is a great touch and allows wattage adjustment (more on this later) to be simpler than the usual 3 button press on most POD systems. The screen is clear and easy to read while not being too big to hinder a proper grip on the device.

Other than that, there is little difference between the Xlim and its nearest competitor. A square fire button sits below your thumb, no adjustment buttons, nothing at all apart from the USB C charging port at the bottom of the device. It’s sleek looking without looking overly simplistic.

The Xlim POD take 2ml of e-liquid and here lies my only gripe with the product, the fill hole. The Caliburn may be difficult to remove the top cap to fill up, but on the Xlim, the POD needs to come out and the overly flimsy rubber bung needs to be removed. This often leaves you with an oily mess on your fingers at the worst of times.

Inside the shiny shell sits ‘n 900mAh battery. Compare that to the 520mAh battery found in the Caliburn and you start to see why I love the Xlim so much. Nearly double the battery capacity and equal, if not better, coil life.

As with it’s form, the Oxva Xlim performs just as well. Let’s forget about the massive battery capacity for a moment and there’s still a lot to like.

The Xlim offers airflow control, which goes from a very restricted lung hit to damn near no airflow. Tight as sucking a twig. About halfway felt perfect for me and where you’d usually have a whole bunch of tightness and a sudden wide open airflow, the Xlim airflow like each position offers a different feel. The airflow sits on the side, but thankfully out of the way of accidental firing.

Power adjustment is done by three presses of the power button and then holding down the power while the wattage scrolls up. It’s a little cumborsome, but at least we have proper power adjustment. The Xlim will however detect the pod resistance when inserted and default to the appropriate wattage.

Speaking of pods, two types are included in the retail packaging. A 1.2ohm (spoiler alert: my favourite of the two) and an equally impressive 0.8ohm pod. The two are quite similar, but there’s a definite improvement in flavour on the higher resistance pod. I’d rate flavour on both pods perhaps a smidgen higher than the original Caliburn. I’d usually step down to 12mg freebase on sub 1ohm coils, but on the Xlim I did not feel the need to do so and vice versa.

Longevity is also impressive with nearly 30ml into the 1.2ohm pod before I gave up to give the 0.8 a try; on par with Caliburn pods.

The Oxva Xlim is a damn good product if you’re still in the market for a highly compact, reliable and well performing pod system. There are a few systems on the market that do as expected, but few do it as well as the Xlim.

If you already own any of the Caliburn devices, the Xlim offers a larger battery and slightly better flavour as well as a decent air flow adjustment.

Actually, there’s very little reason not to upgrade to the Xlim, it’s one of, if not the best pod system we’ve tested. 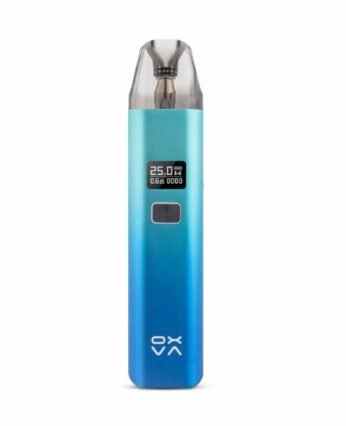