Vaping & Running: How Does It Affect Athletic Ability?

Can you improve as a runner even if you’re vaping regularly? In my anecdotal experience, you can – and this is one of the key differences between smoking and vaping…

As you get older or have kids, you start to get more conscious about your health. Back in my 20s, I smoked and drank like there was no tomorrow. I didn’t care about cardiovascular health or whether my 20-a-day smoking habit would one day eventually kill me. That was a problem for future me, not the fun-loving present iteration of myself.

I’m now 35, and a new father. Things have changed. I own businesses and have responsibilities, so over the past five years, thanks in no small part to my amazing fiancé, I have slowly changed for the better. I’m healthier than ever before, I follow a diet completely devoid of sugar and processed food (keto), and I run every day. Either 5 miles or 10 miles, depending on how I feel.

I run because it’s cheaper than therapy, because it makes me feel better than any drug I’ve ever taken, and because it keeps my bodyfat at respectable levels. But mostly, I run because I want to be fit and healthy as my boy grows up, so I can run around and play with him in my 40s without breaking a sweat or having a coronary. This is my #1 driving factor. My son. In fact, my only vice nowadays is red wine, a bit of recreational pot, and vaping.

How Can You Run & Vape? Doesn’t It Affect Your Lung Capacity?

I’ve attempted to develop a running habit countless times during my life; at least, six times in my twenties and once or twice in my thirties. They all failed to stick.

Until I read Born To Run.

Then something changed. Up until that point in my life, I viewed running as unnatural. I thought it was terrible for your joints and humans weren’t designed to run long distances. Turns out I was completely wrong.

We are running machines, designed by evolution to run miles a day. Hell, prior to the invention of weapons, humans used to run-down animals until they dropped dead from exhaustion. And they did this for THOUSANDS of years.

I started running (properly) in April 2019. I laced up some trainers and went out on a local trail not expecting much. About 15 minutes into my run, I noticed something – I didn’t feel too bad. My lungs weren’t burning, and I didn’t have that acid-burn feeling in my throat. I trotted on, genuinely awe-struck by what was happening. This had never happened before. I’ve been on many runs and they all sucked immediately. So what was different this time around? A few things, actually:

Every single time I have attempted to start running, I was a smoker. I thought I could push through it, plenty of runners smoked in the 1960s and 70s, for instance, but you can’t – and even if you could, why would you want to? The effect smoking tobacco has on your lungs is terrible. We all know this. And while you’re 100% better off doing neither, vaping is 95% safer than smoking and doesn’t appear to hinder your lung capacity in the same fashion. I mean, I vape A LOT, and I can now bang out a 24-minute 5K without breaking a sweat.

I am no athlete. A 24-minute 5K is not impressive. But in my 20s, I couldn’t even run for 1K without nearly puking and feeling like my lungs were on fire. The only difference between my 25-year-old self and my 35-year-old self, aside from the grey hair, is vaping (and a better diet). I no longer smoke cigarettes. But I do vape, so what gives? I think it’s rather simple: multiple studies have shown that vaping improves lung function in smokers. Improved lung function equals better athletic performance. And this means you can, after a bit of training, run longer and harder.

I can recall what it felt like to run as a smoker; it felt like my lungs were on fire and I couldn’t get enough oxygen into my system. This feeling was experienced instantly – 5 or 6 minutes into a run. With vaping, I don’t get any of these symptoms. And I’m 10 years older. In fact, I am now fitter than I was when I was 18. I can run for longer, I have less body fat, and I have vastly improved stamina. And the only thing that has changed is that I no longer smoke – I vape instead.

#2) I Learnt How To Run With Correct Form

That’s not the whole story though. After a few weeks of research, I learned that I had been running incorrectly my entire life. I was a heel-striker. I let my feet get too far out in front of me. I ran with poor form, basically, and this made running even more difficult. Form is key when it comes to running. Get it right and it’ll shave minutes off your times. Do it wrong and you’re looking at a serious injury, aching knees, sore joints, and back pain.

As with most things in life, much of what we think we know about running is wrong. You don’t need Nike trainers to run. In fact, the less cushioning you have the better. Evolution designed your foot to run. It took millions of years. It is already perfect for running. You do not need $200 trainers with cushioning and gel. Not when you have optimized your running form. Not smoking and improving my running form are the #1 things that turned my performance around.

I never understood how someone could get addicted to running. It just seemed like a lot of work and pain. But I now get it; when you run properly, it’s easy – like you’re flying. The difference between how I used to run and how I run now is like night and day. Using the correct form makes running easier, keeps you injury-free, and allows you to run long distances without it feeling like your lungs or head are about to explode.

In an ideal world, I’d run barefoot. If I lived near a beach, I’d be barefoot running on that sucker every morning for hours at a time. Sadly, I don’t live near a beach and the roads and surfaces I run on are bumpy, riddled with stones and cracks, and the odd bit of broken glass for good measure. I can’t run barefoot, basically, but I can get damn close with a pair of Vibram running shoes. There is no lift on these, no cushioning either. And the net result of this means you’re as close to running barefoot as can be. Your feet react correctly to the ground, as they would naturally, and your running gait improves. These shoes, not smoking, and sorting out my running form are the three components that made the most difference to my running habit.

Nike pretty much invented the modern trainer. The idea of jogging – or heel-striking for hours at a time – is the #1 reason why people injure themselves running. In fact, the incidence of running-related injuries spiked in the years following the release of Nike’s first “modern” running shoe, a show that was designed for you to land on your heels when you run – the complete inverse of how you’re designed to run! Ultra-long distance runners and marathoners will likely require more support than is available from Vibram barefoot running shoes, but for anyone regularly running under 20K a session they are perfect.

Why Running Is The Best Thing You Can Do For Your Health, Well-Being & Longevity

The average, serious runner peaks at about 18 years old. If you’re a pro, you’ll likely top out in your mid-20s, with respect to speed over, say, a 10K distance. But get this: runners can maintain their habit well into the 70s and 80s and don’t seem to lose too much speed. This pretty much tells you everything you need to know about running. If a 60-year-old experienced runner can wipe the floor with an inexperienced 25-year-old runner, there must be something to it. Name another sport, save for golf and pool, where this is possible?

On top of this, it is never too late to develop a running habit. If you’ve quit smoking and moved onto the vapes, the next best thing you can do for yourself is to start improving your cardiovascular system. And the best way to do that? Running. Running is also the cheapest of all exercise routines. You don’t need a gym membership or fancy equipment, just a pair of trainers and you’re good to go. The first few sessions will suck. Big time. But once you’re a month or two into your new running habit, you’ll struggle to realize how you ever lived without regular runs.

And then there’s the endorphins. Run long enough and you get a high that wipes the floor with any illegal or legal drug on the market. Seriously. Nothing else compares to runner’s high. Once you’ve experienced it, you’ll know. And you’ll keep coming back for more! This is why people get addicted to running.

I know this because I have been someone who LOATHED running and someone who now LOVES running. And if I can make the switch, then you can too. If you’re reading this post, chances are you’re already vaping and have quit smoking. If that’s the case, well done! Your next goal, regardless of age, weight, or current fitness levels, should be to improve your health by incorporating regular exercise – and not just running, weight training is important too. So, start running and banging out the press-ups.

It’s never too late to make positive changes in your life.

And before you go, make sure you check out the newly launched VapeBeat E Juice Store – we’re super proud of it! 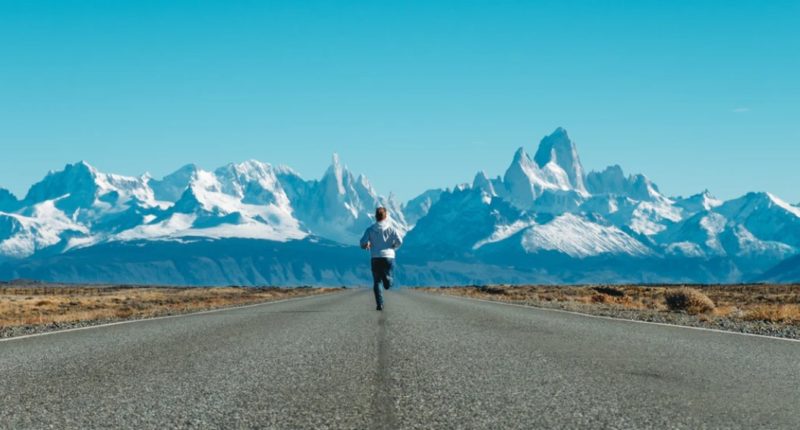