Does Vaping Cause Lung Collapse? Everything You Need To Know

Does vaping cause your lungs to collapse? If you read the Daily Mail, you’re probably convinced it does – but is there more to it? Let’s investigate…

First, however, we have to start from the genesis of this story. A few weeks back, a guy posted on social media that vaping his JUUL had caused one of his lungs to collapse. He had surgery to sort him out and, as far as I’m aware, he’s made a full recovery, which is great.

The man in question believed it was his JUUL habit that had caused his collapsed lung, a point the Daily Mail was quick to jump on. The Mail Online, as ever, did not check its sources, and it’s not entirely clear whether vaping had any role in his collapsed lung. More on that in a bit, though.

The Mail Online is a HUGE site, commanding tens of millions of visitors every week. The story of the man with the collapsed lung from “JUULing” quickly went viral and the anti-vaping zealots in the US had a field day with it. In fact, this story couldn’t have come at a better time for those looking to get vaping products banned from the market in the US.

So… Did Vaping Cause This Man’s Lung To Collapse?

It’s not entirely impossible that it didn’t, but careful research shows that it isn’t likely the JUUL played any part in the man’s collapsed lung. Why? Because the cause of the collapse, most likely, was a pre-existing and fairly common condition called spontaneous pneumothorax.

“Primary spontaneous pneumothorax is likely due to the formation of small sacs of air (blebs) in lung tissue that rupture, causing air to leak into the pleural space. The air in the pleural space creates pressure on the lung and can lead to its collapse,” said The National Institute of Health.

It added: “Blebs may be present on an individual’s lung (or lungs) for a long time before they rupture. Many things can cause a bleb to rupture, such as changes in air pressure or a very sudden deep breath. Often, people who experience a primary spontaneous pneumothorax have no prior sign of illness; the blebs themselves typically do not cause any symptoms and are visible only on medical imaging. Affected individuals may have one bleb to more than thirty blebs.” 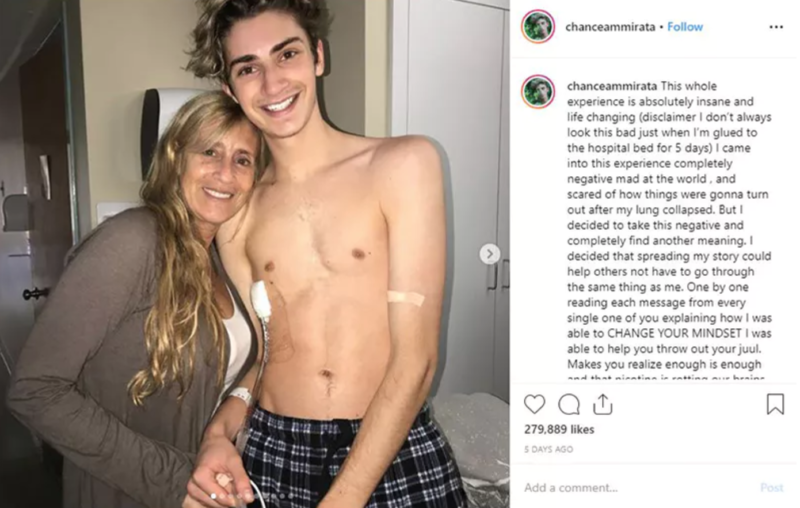 Could vaping have played a factor? Possibly. But when you consider that there are over 42 million vapers worldwide and there hasn’t been another case of this documented, it stands to reason that the collapsed lung was most likely the result of a pre-existing condition that was already in play, regardless of the JUUL.

How common is spontaneous pneumothorax? According to NHI, each year, on average, 7.4 to 18 per 100,000 men, and 1.2 to 6 per 100,000 women are affected by the condition. Taking this into account, wouldn’t be seeing A LOT more of this kind of thing if vaping caused spontaneous pneumothorax? Like hundreds of thousands of cases a year? And big spikes in incidences that track alongside the rise of the vaping during the past several years?

Who’s most susceptible to spontaneous pneumothorax? Tall dudes, apparently, tall, skinny guys ages between 10 and 30 years old, according to Shi-ping Luh of the Department of Surgery at St. Martin de Porres Hospital in Taiwan. And guess what? Chance Ammirata is tall, skinny, and fits perfectly into this model.

I’m not down-playing the guy’s experience, so please, do not think that. Nor am I calling him a liar. Most likely, Ammirata put two and two together and got five – it was an easy mistake. It makes sense too; I mean, if I’d just started vaping and my lung collapsed, I’d sure as hell probably blame my vaping device. It’s a knee-jerk reaction that I guarantee 99.9% of us would make if put in the same situation.

The Problem With Viral Tweets

Chance’s tweet has been seen by millions of people now, and a good chunk of them will simply take what he’s saying as gospel – that vaping does cause your lungs to collapse. No one will have bothered to look into it properly. No one will have researched whether or not Ammirata had an existing condition. Instead, a conclusion, likely a false one, is drawn and disseminated to millions of people.

How many people went back to smoking after seeing this tweet? It’s impossible to track empirically, but I bet there’s a fair few thousand that saw it and immediately stopped vaping. And who can blame them? The Mail Online did such a good hatchet-job on the story. Did it mention spontaneous pneumothorax in its post? Of course, it didn’t. Instead, it used emotive words like “KILLED” rather than a more measured approach.

Granted, the Mail Online is a tabloid. It doesn’t deal with facts. But even so, the very fact that it basically blamed JUUL for an established medical condition that affects men of Chance’s age without even mentioning it in passing as a potential cause for what happened illustrates just how poor the standard of journalism is at the Mail Online.

Moral of the story? Don’t believe ANYTHING you read in the Mail Online. That kind of goes without saying these days. More importantly, make sure you do your own research around the subject of vaping. The MSM will not tell you the truth, so you’ll have to look elsewhere. Fortunately, there are plenty of excellent researchers and places online to do this.

Take ALL these studies, for instance: 10 Pro Vaping Studies The FDA Doesn’t Want You To Know About.