The Lost Vape Thelema Quest sets out to make some waves with an affordable version of the Thelema mod. How does it hold up to the expensive DNA version? Today we take a peek!

We have talked about how Lost Vape has split into two different companies over the last three years. One is the luxury focused main line of products that feature a DNA board that controls all of your functions. The other side of Lost Vape is the “Quest” brand, and this part of the company makes more affordable products. We recently went over this split with the DNA Lost Vape Hyperion.

Here at Vapebeat we also enjoyed the Lost Vape Centaurus, which was another one of the more expensive offerings. Then again, we love just about anything DNA. It is one of the best chips for vaping, with it’s only rival being YIHI.

The Lost Vape Thelema has been very highly regarded by just about every reviewer. The Thelema is a reboot of the very popular Therion Mod. This was a simple C-frame mod that was both fashion AND function rolled into one. The leather/carbon fiber accents and DNA functions made this an amazing combo.

While the original Thelema was out of a lot of vaper’s price range, Lost vape hopes to change that with the new Quest Thelema. Today we are going to get a first look at how it works, and the differences between the Quest, and the more expensive brother. Will the Lost Vape Thelema Quest stack up to it’s expensive counterpart?

The Lost Vape Thelema Quest: What We Know So Far…

So far, we know a few things about the Lost Vape Thelema Quest. First of all, it’s a LOT less expensive. We know that feature-wise, the main thing that is saving the cost is the lack of a DNA board. It has the proprietary “Quest 2.0” board installed in the place of the DNA.

Now for some people, this is a huge deal breaker. I can totally understand that attitude, especially for Lost Vape collectors. But for regular vapers, this might be a chance to get a really nice mod, for a great price! Let’s go over what we know…

Let’s start at the top of the kit, and work our way down. The Lost Vape Thelema Quest comes with the UB Pro tank. We have already seen this tank on other Quest products, and it is a pod-style tank. This is the same pod tank that comes with the GRUS kit, and it works really well with the coil set that Lost Vape makes.

You have a few different options for the UB Pro coils, and there should be a coil that just about any vaper can use. The ones that come with the Thelema kit are obviously for higher wattage sub-ohm vaping. But Lost Vape makes a pretty wide variety, if low ohms is not your thing.

Unlike most pod-style tanks, the UB Pro has a side filling port (at least it did on the GRUS). This is cool, because you never have to worry about the filling port leaking into your 510! The UB Pro might have changed this feature, I guess we will see. Other than that, the UB Pro is “par for the course” these days. Most companies have gone in this pod-style direction. So the tank is standard fare, in my opinion.

But the mod? The Mod is something else!

Looking over the mod, it is the exact same frame as the original Thelema DNA. It is made from the same materials, and has the same layout, button-wise. Even the doors are swappable between the two different versions! Everything is literally the same, minus the DNA board.

The design is still a rather lightweight C-Frame mod, that holds dual 18650s and goes up to 200 watts. The dimensions of the mod are exactly the same as the DNA Thelema. You still get three buttons for controlling wattage and menus. Seriously, there is no difference in terms of construction quality. I’m sure the Quest version is produced in the same factory as the DNA version.

Something that you do not get with a DNA 250C, is the USB-C charging features. The Lost Vape Thelema Quest has a USB-C port. DNA has just started making it’s board’s USB-C, starting with the new DNA 100C. So technically, this is an upgraded feature!

So you get the same quality as the DNA version, but with upgraded charging…what else?

There are entirely new designs! The new Lost Vape Thelema Quest has three different models variants that the DNA version does not. These three new models have clear/smoked plastic door frames and they look very modern and sleek. Remember, the doors are swappable with the DNA version, so if you wanted to change them, you can!

The new models come in three different colors. You have Black. Silver, and Gunmetal frames to choose from. The new clear doors allow you to see the batteries inside the mod. These clear doors open a lot of opportunities to customize your mod, if you have some cool battery wraps!

The quest version still has the same color combo offerings as the DNA version as well, if you wanted the “classic” styling.

So let’s talk about the big difference between the DNA version and the Quest: The Chip/Board.

So if the frame, doors, and all design features are intact from the more expensive DNA version, they must have cut some corners on the chip, right? I don’t think they did! The new “Quest 2.0” chipset seems to be a hybrid between a Geekvape Aegis system, and an actual DNA chip.

It may not be highly customizable like a DNA, but the display still looks like it can hold it’s own. It has all of the same modes as a DNA system. So if you like voltage mode, Bypass, and Temp control…then you still have those functions on the Lost vape Thelema Quest. There is even a Boost system, just like the DNA. I suppose we are missing out on Replay Mode from the DNA, but that isn’t a huge deal for most vapers.

If this chipset is anything like the other Quest products, it can definitely keep up with the best of them. I enjoyed the GRUS and the LYRA systems. This is the same chipset, with additional features.

Let’s talk about the big question before we give our final thoughts. How much is this thing going to cost? Lost Vape is known for using high quality materials, with or without DNA chips. So is the Lost Vape Thelema Quest going to hurt your wallet?

No, actually! The list price is $69.99 for the kit! I imagine the mod by itself, will be even less expensive. Putting it in the same price range as Geekvape and Voopoo.

So far, vendors across the internet do not have it in stock. I took a quick look at all of the major outlets for the U.S. and I couldn’t even find a pre-order yet. So I imagine they will hit the shelves within the next month. When they do, I will update this page with a link to buy your Lost Vape Thelema Quest kit!

So what are my final thoughts on the Lost Vape Thelema Quest? I think this is a great idea and should be done with all of the Lost Vape mods!

The Lost Vape Thelema Quest is really only missing the DNA chip. While I was quite the DNA snob for years, I have recently decided that I don’t really mind stock chips. Mostly, because I think companies like Voopoo have made chips/interfaces that are just as functional as the DNA, at a fraction of the cost.

Years ago, the accuracy of the DNA really mattered when it came to mass-produced mods. Lots of mods by SMOK and Sigelei proved to be inferior when it came to Temp Control, and wattage accuracy. But these days, it seems like most Chinese companies have started catching up with Evolv’s DNA chip. Maybe that’s why we don’t see them as often anymore?

So if you are looking for a very nice, almost luxurious dual battery mod…The Lost Vape Thelema Quest might just be what you’re looking for. It has all of the same design features, for half the cost. You can even buy extra doors and swap them out, just like the DNA version.

Or maybe, you already have the Thelema DNA? Then the Thelema Quest would be nice to add to your collection as well! Maybe you don’t want to take your expensive DNA mod to work/bars/night out. You can take the quest version instead, and not have to worry about something happening to your precious DNA.

All in all, this is a huge win for Lost Vape! Keep an eye out, we will post a link to buy the Lost Vape Thelema Quest kit as soon as it hits the stores! 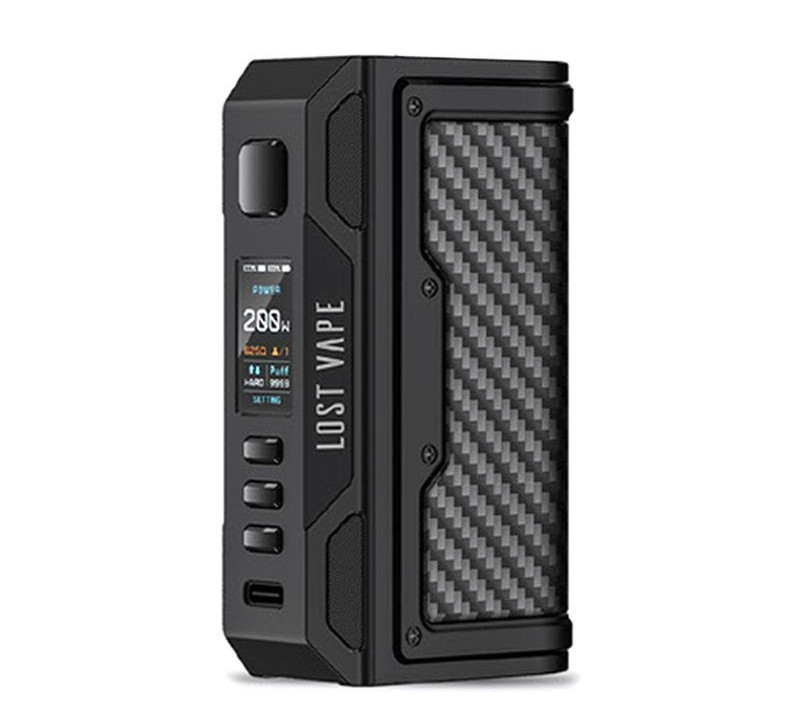