New to vaping? Thinking about getting a vape pen? Torn between a JUUL or a Blu e-cig? No worries, you’re in the right place! In this post we’re going to be taking a look at both vape pens, how they work, and, in the end, help you decide which is the best vape pen for your needs…

JUUL vs Blu – Which is Best?

The JUUL (LEFT) and The Blu Ecig (RIGHT)

Winner? Draw – they’re both more or less the same in this regard. Aesthetically, I do think the JUUL is a more attractive-looking device, though.

Winner? Blu – it has a better battery life

Winner? Blu – it has more flavors to choose from.

Winner? Draw – they’re both super-simple to use.

Winner? Blu – it lasts longer and kicks out great-tasting vapor.

JUUL might be the vape that everybody knows and loves, but for me, Blu offers up more flavor options, better battery life, and an overall cheaper vaping experience in the short, medium, and long term. It’s also way cheaper than JUUL to buy… 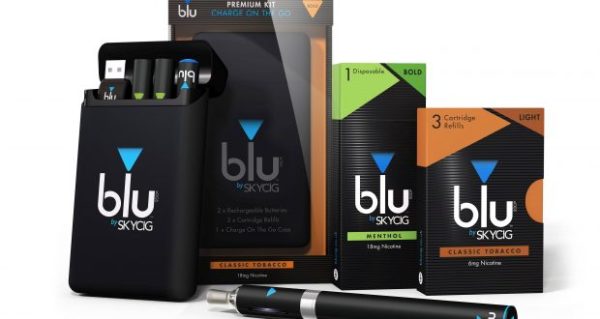 JUUL vs BLU – A Full Comparison

New to vaping? Thinking about getting a vape pen? Torn between a JUUL or a Blu e-cig? No worries, you’re in the right place!

In this post we’re going to be taking a look at both vape pens, how they work, and, in the end, help you decide which is the best vape pen for your needs.

The pitch and function of both the JUUL and the Blu e-cig are very similar. Both companies are going after the same demographic: current smokers that are looking to quit.

Another great option for this style of vape is the Apollo Brez Deluxe; it’s smaller than the JUUL but actually has better battery life. I recently tested this one out and had a blast using it! Like the JUUL and Blu, it’d make a great first vape for current smokers.

MORE: The Are The #1 JUUL Alternatives Right Now

And, make no mistake, these kinds of vapes do have a place in today’s market, a rather important one.

For this reason, Blu and JUUL have made their respective products as similar to actually smoking as possible. You get the same sensation and the same level of nicotine, only it tastes a lot better (and is 95% safer, of course).

I have both of these vape pen devices and I have used them both pretty extensively, so what follows is my own personal, appraisal of both based on a couple of month’s worth of usage.

First, let’s take a look at each device individually.

JUUL is extremely popular, both in the US and UK. Of all the vape brands in operation today, JUUL is the most well known. It’s also one of the youngest brands too. 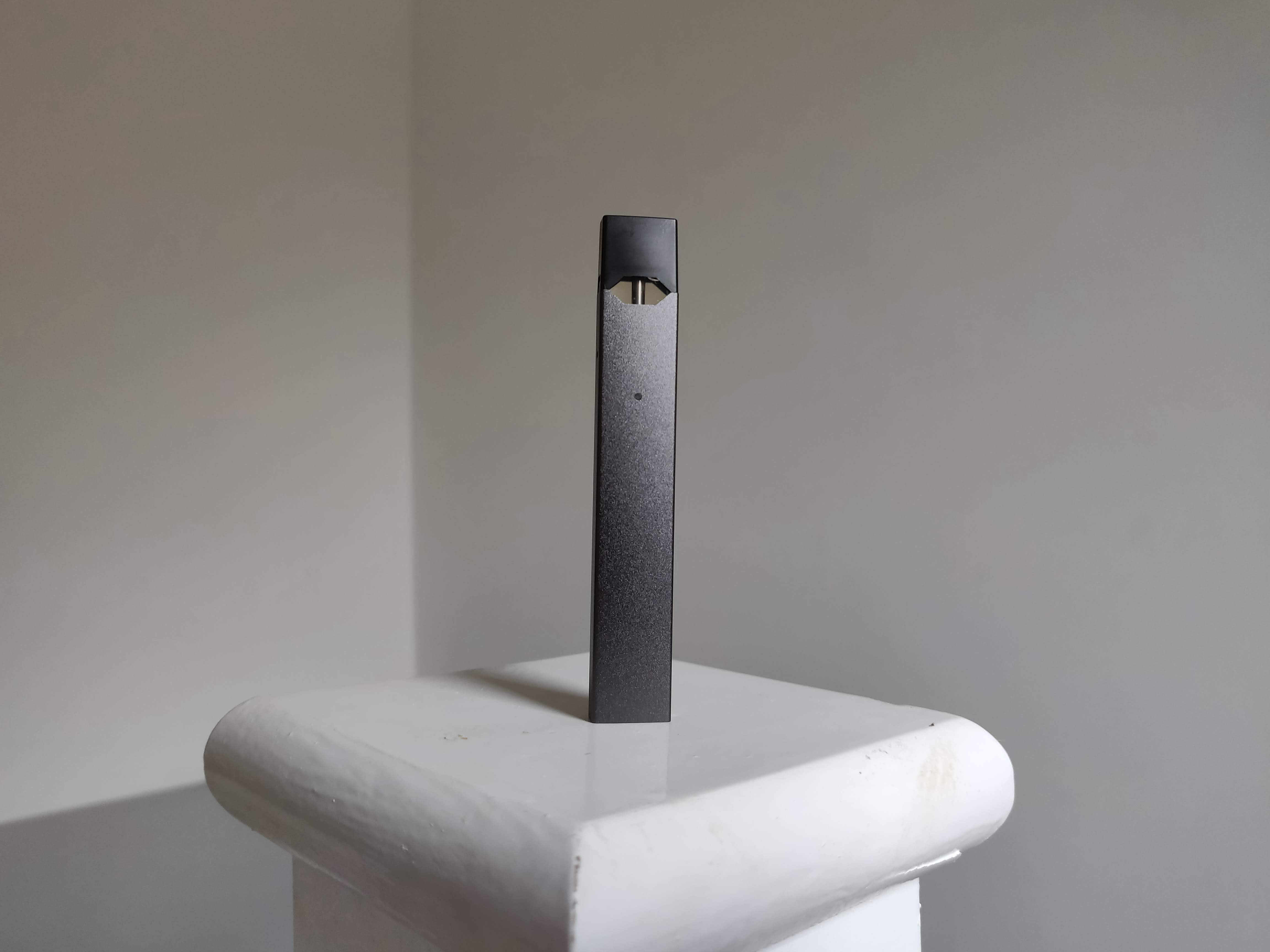 The JUUL is a small, lightweight device that runs an internal battery. The E Juice is stored on pods (these are called JUUL Pods) which are inserted into the top of the device.

How it works is simple: make sure the device is charged, then insert a JUUL Pod and take a drag. And that’s it – it is incredibly simple.

You have the following flavors to choose from. Please note: JUUL is a closed system, meaning you CANNOT add your own E Juice (though there are unofficial ways around this).

JUUL Pods run Nic Salts E Juice which is a lot stronger than normal E Juice. The reason? For a bigger hit that is closer to what you get from an actual cigarette.

The flavors, while limited, are very good.

My personal favorite is Mango. I could vape that stuff all day long – and I sometimes do!

Each JUUL Pod lasts for about 200 puffs; that’s around the same time as a pack of 20 cigarettes.

The JUUL battery life isn’t great. But it is a small device, so this kind of goes without saying.

The battery will last for about the duration of a JUUL Pod, so, again, around 200 puffs. 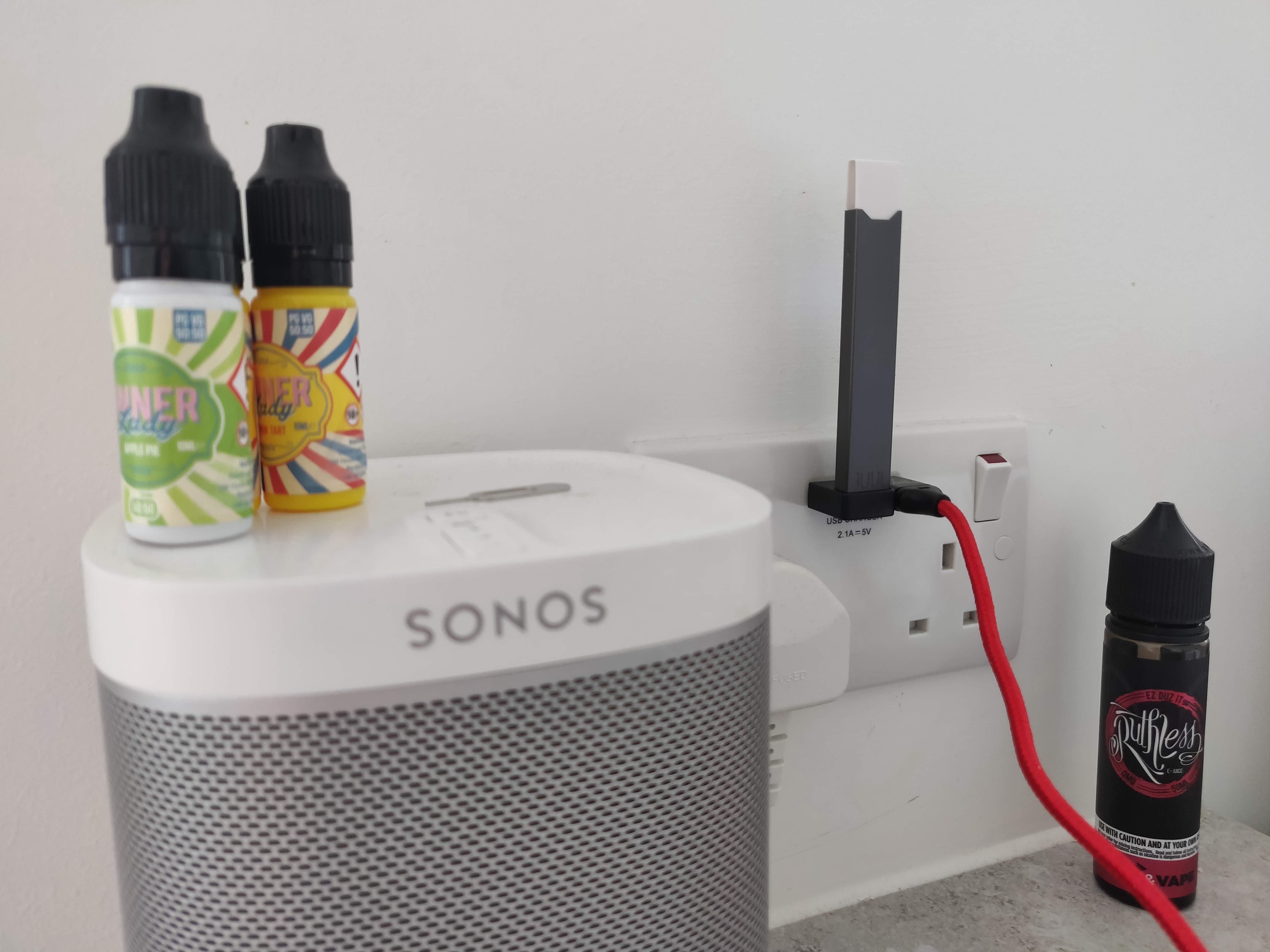 Performance is very good, however: you get excellent vapor production and extremely precise flavor. And because of the Nic Salts, you get your fix quicker and do not need to vape as much.

This is why battery life shouldn’t be too much of a concern.

Again, the Blu e-cig is remarkably similar to JUUL. It is more or less the same kind of deal, in that it is a closed system that runs on pods. The pods also run on Nic Salts E Juice too.

The design is different though. The Blu looks and feels slightly more robust than the JUUL. It’s thicker and longer and has more rounded edges than the more angular JUUL. 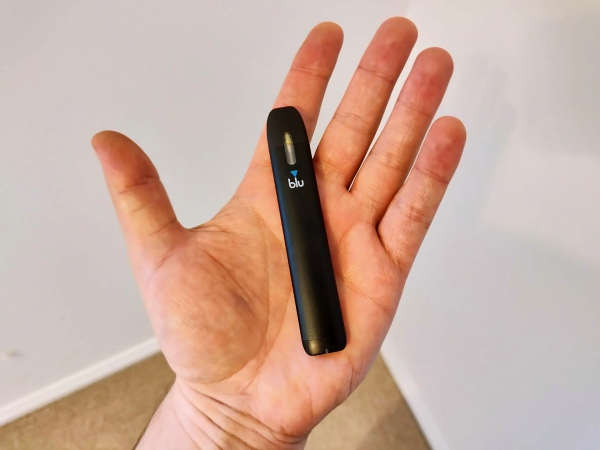 This means it is super-portable and will fit pretty much anywhere on your person. I tend to keep mine in my pocket when I’m using it. When it’s in there you barely notice it.

Bottomline: there is very little to separate these two devices in terms of how they look and how they handle.

They’re both elegant, portable vape pens and neither takes up any room in your pocket.

Blu’s pods are called myBlu and unlike JUUL it offers A LOT of choice when it comes to flavors – about four times as much as JUUL. 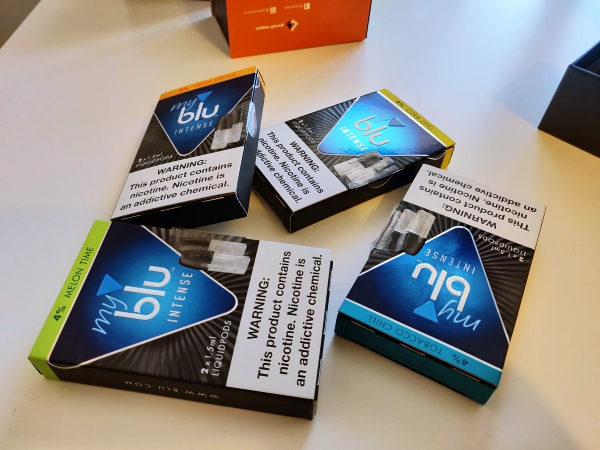 In this respect, Blu is a way better option. If flavor choice is important to you, Blu has way more to offer than JUUL.

Again, Blu’s pods are filled with Nic Salts E Juice, so you’re going to get a nice hit when you vape them. 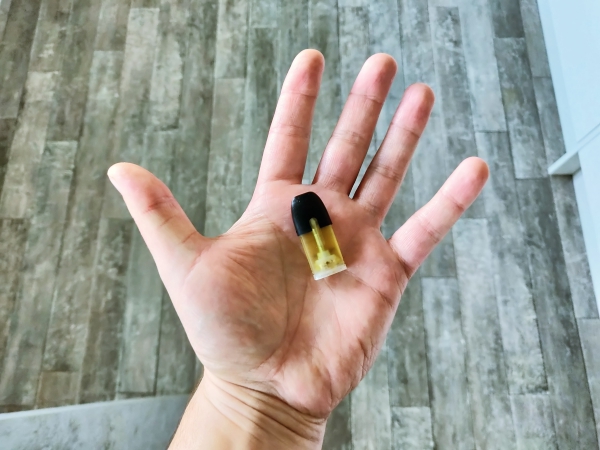 Another area where Blu has JUUL beat is battery life. It’s better by quite a margin in this context. On top of this, you can charge the Blu e-cig using microUSB which is super-handy.

The JUUL requires a propriety charging dock, and if you forget it, you’re basically screwed if you want to charge up the device. This has happened to me multiple times and it is NOT fun. 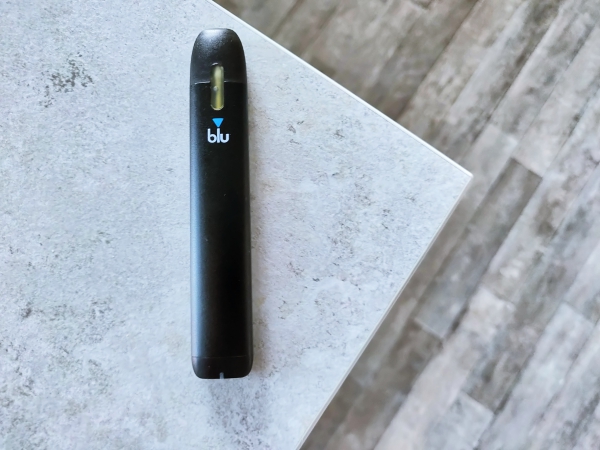 With the Blu, all you gotta do is find or borrow a microUSB charger and you can top her up to almost full in about 30 minutes or so. This is an infinitely preferable method for charging than JUUL’s.

Each myBlu pod will last around a full day. In my experience, they tend to do a little more than this, providing you aren’t chain-vaping it all day long.

The flavors are very decent too. Ditto the vapor production. Chuck in better battery life and the fact that is cheaper to run than the JUUL, and it is starting to look like the Blu ecig is superior to the JUUL.

JUUL or Blu – What’s The Best Vape Pen To Get?

I’ve tried to be as fair as possible to both vape pens. Neither device is perfect, and both have imperfections. 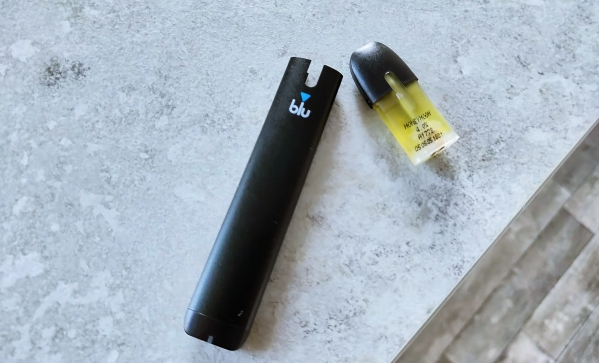 But I do think Blu has some pretty major advantages over JUUL. The most notable of which are as follows:

I do actually prefer the way JUUL’s pods taste, but for overall choice and price, Blu’s way of doing things is kind of more appealing (and also cheaper in the short and long run).