The Wismec Luxotic MF Box mod is a very odd little fellow, as it’s both a standard box mod AND a squonk mod. Bonkers.

It also has a pretty darn impressive party trick: it can switch between being a straight-up, dual-18650 vape mod and a single 21700 cell squonk mod.

The idea being, you get the best of both worlds: squonking at home and dual-18650 cell battery performance for when you’re on the road.

It’s certainly a novel idea, but is it actually any good in practice?

I just spent a couple of weeks hanging out with the Wismec Luxotic MF Box mod to find out.

Read on for my full report. 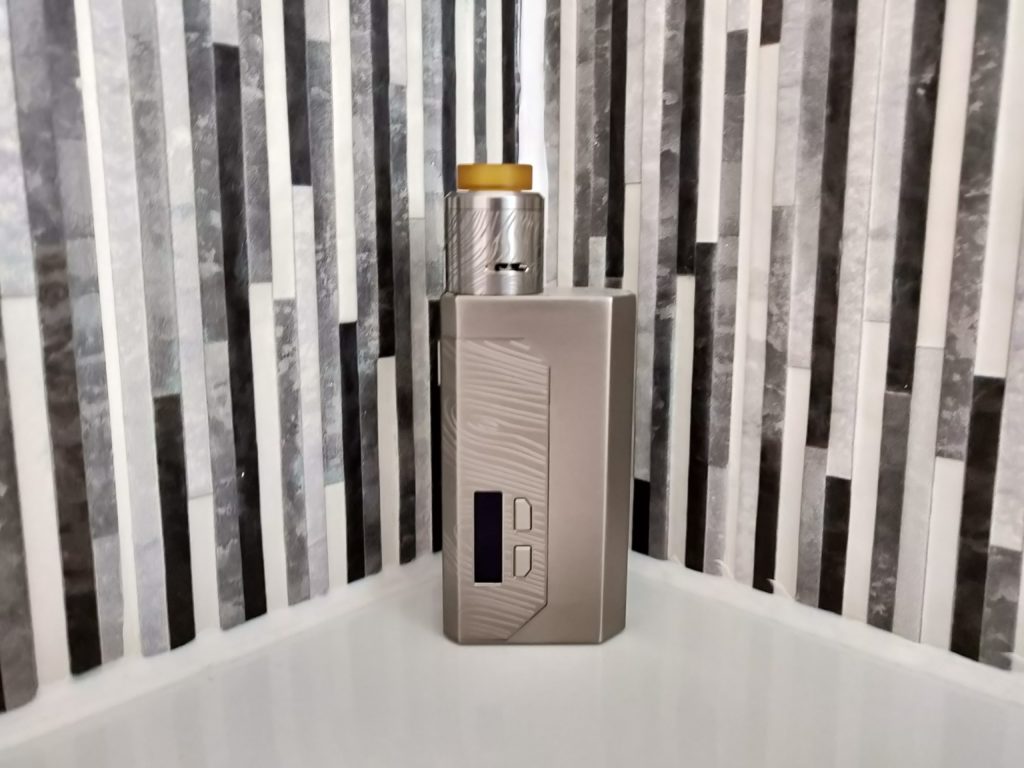 Wismec has taken things in a slightly different direction with the Wismec Luxotic MF; it’s chunky, all-stainless steel, and keeps a tight aesthetic across the entire device.

The fire button and display area are contained within a break-out area within the design where a wood-like accent is etched into the steel.

Again, it’s a nice touch and it does add a nice break to the never-ending stainless steel vista that covers this mod. 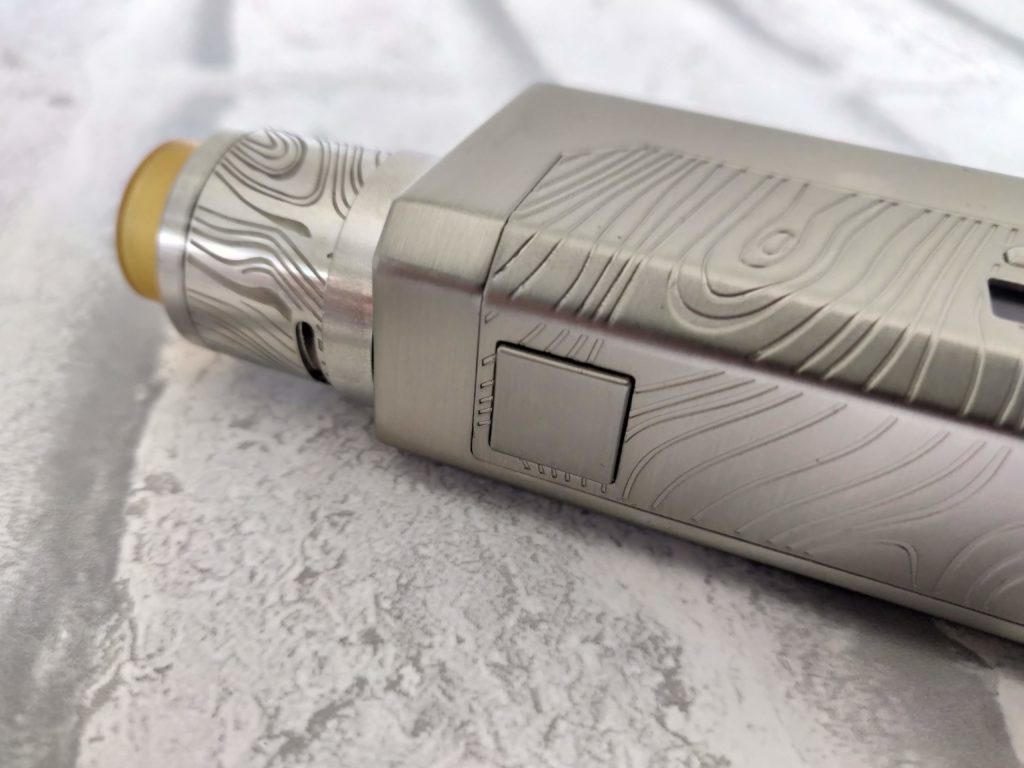 The CLICKIEST of Clicky Buttons 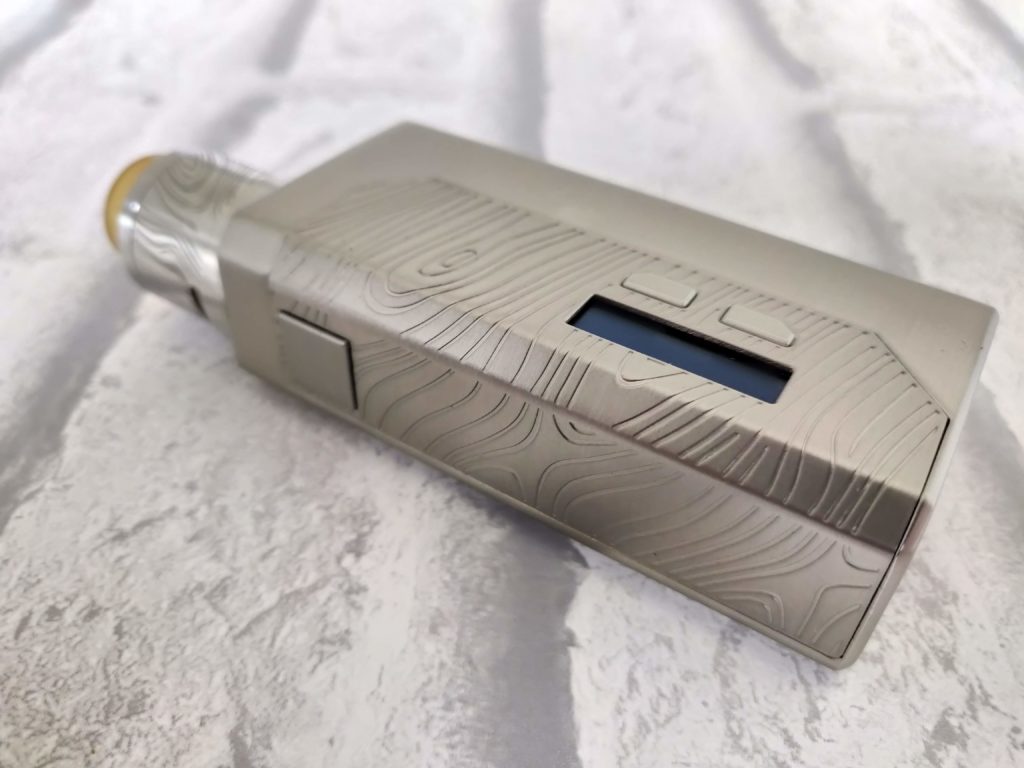 The OLED Display (It’s Only There In Variable Mode)

It feels premium and it looks pretty darn premium too. But you definitely would not want to drop it; it’d scratch and scuff up with very little trouble.

I like the look of it; it’s definitely not something I’d naturally gravitate towards normally, but it certainly looks stylish and I can see plenty of vapers really digging its styling.

But what REALLY makes the Wismec Luxotic MF unique is the fact that you have to disassemble it yourself in order to switch the board around. 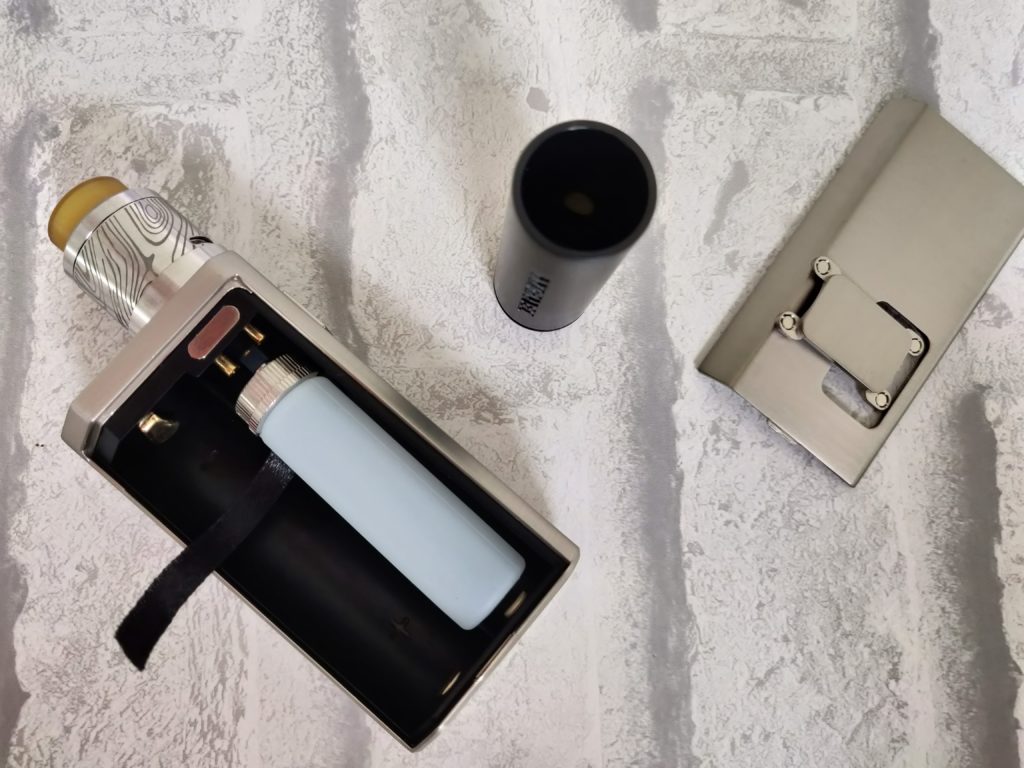 That’s right: you have to unscrew the top panel, take out a board, switch it over, re-secure it in place, screw the pieces back together and, THEN… you’re ready to vape.

To be honest, I’m not at all sold on this. I don’t like messing around with the guts of my mods, so if you’re anything like me, you’ll probably want to avoid this mod.

However, if you like tinkering around with circuit boards and screws, you will love what Wismec has done here. It’s definitely unique and I don’t know of any mod that operates anything like this.

In variable output mode, the Wismec Luxotic MF performs like a standard vape mod. You have a maximum of 100W to play with and there is zero lack in ramp-up time.

In this mode, you’re running 2×18650 cells – and you will need them with the Guillotine 2 RDA (more on this later), as it’s a dual-coil tank and it likes to vape hard. 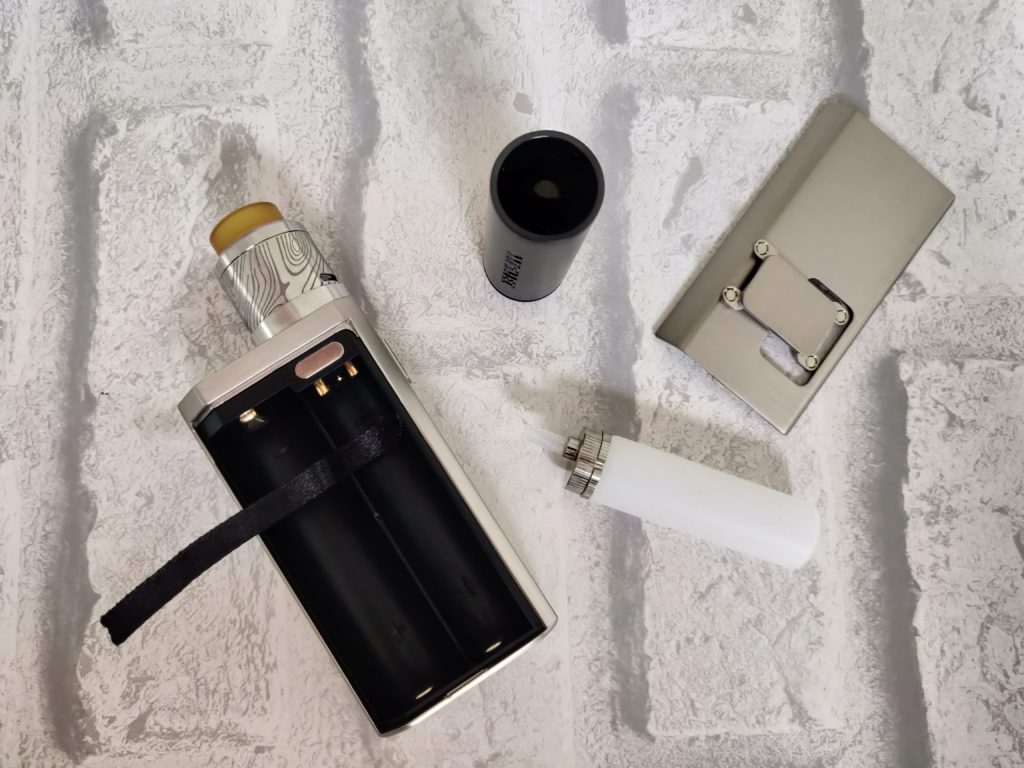 I didn’t find any issues with the variable mode’s performance. It works much as you’d expect, though there are no vaping modes – ByPass, for instance – or temp control.

Basically, it’s a no-nonsense power-chucker. It doesn’t have any fancy bells and whistles; just 100W of power and your RDA. And for me, that’s perfectly fine.

It’s all I’ll ever need.

Once you’ve completed your engineering degree and switched the board over, you’re now in squonk country. And, as ever, it’s a nice place to be.

Do I like this mod as a squonk mod? Yes and no. There are things I like and things I don’t.

You have a 7ml squonk bottle to play with, and it squonks pretty nice. The juice flows evenly and it’s nice and quiet, unlike Farty McFartterson (AKA The Pulse 80W mod).

The power delivery in both modes is decent; there’s no lag or ramp up time. You hit the EXTREMELY clicky button and you’re away.

I’m not 100% on the design of the mod; it just feels too utilitarian for my tastes. Plus, the squonk hole (the bit you squeeze the bottle through) is tiny. 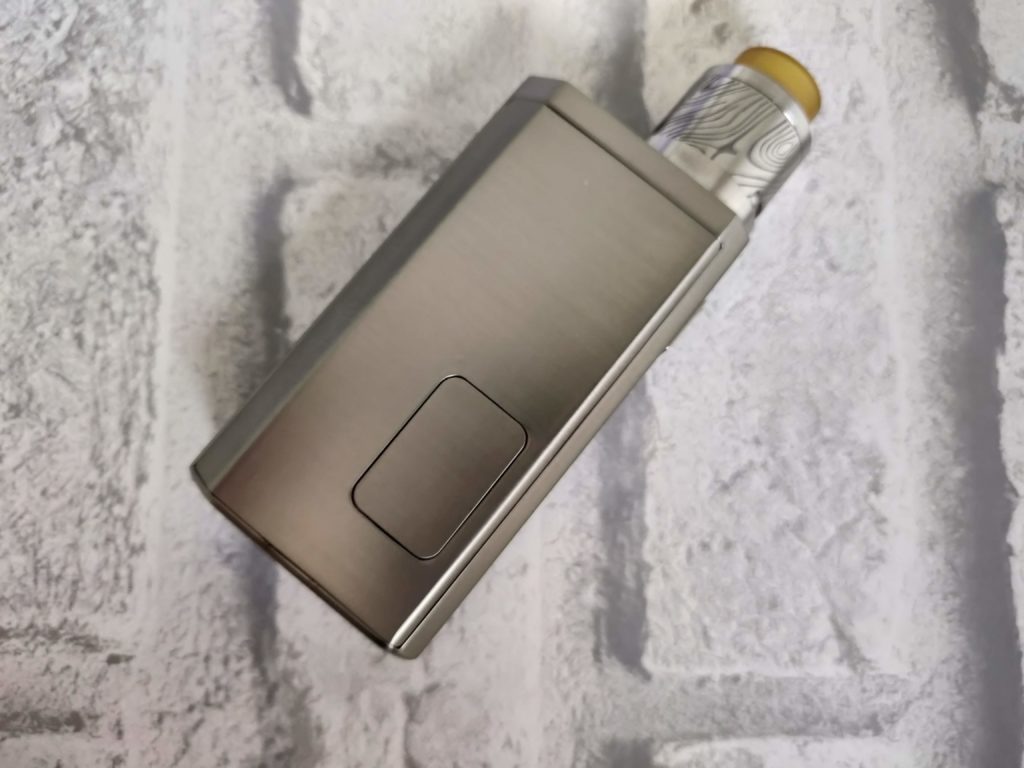 The Squonk Hole is Filled In When In Variable Mode

I’ve been using the Pulse 80W mod alongside the Wismec Luxotic MF and I’ve been trying to figure out which I like best.

If I had to lose one, and I know that might sound crazy to some of you, but I think I’d lose the Luxotic.

Why? I just prefer the way the Pulse 80W looks. It’s lighter, WAY less complicated, and it does exactly what I want it to – i.e. it squonks.

And herein lies the rub: does anybody actually want a two in one mod? I’m sure Wismec did its research, and I’m sure there’ll be plenty of readers that love this idea, but I’d just rather have two mods.

And let’s face it: most of us have multiple mods running at the same time. I know I do! Christ, I have like six on the go at the moment. 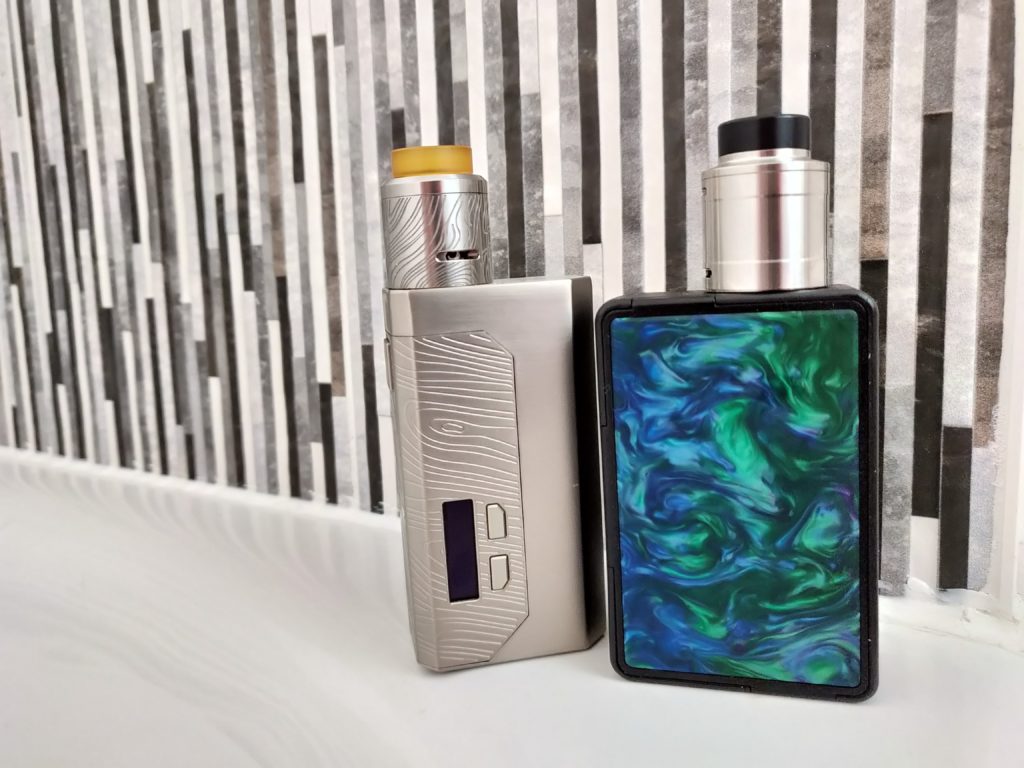 I get what Wismec is doing here. I really do. But for me, as a user, it really ain’t my thang. Not even a little bit.

That should NOT put you off though. The Wismec Luxotic MF is a great little squonker, and it kicks A LOT of ass in variable mode too.

So if you are Wismec’s target user, you’re probably going to love this mod. It does look slick AF, and it performs well in both modes.

In this respect, the Luxotic MF is definitely a master of both trades.

Battery Life (In Both Modes)

With a single cell mod, even if it’s a 21700 cell, you’re ALWAYS going to struggle with battery life.

Even more so if you chuck a dual-coil RDA into the mix, which is what you get here in the form of the Guillotine 2 RDA.

This is why I ALWAYS prefer dual-cell, regulated squonk mods.

You will need spares with you if this is your daily driver (when using in squonk mode), simply because you have to run it at a high power output to get any kind of performance from the RDA.

This is the same deal with most single cell squonk mods, however, so I definitely wouldn’t consider this a negative; it’s pretty much par for the course these days.

Get a single coil RDA on there, like the Recurve RDA, and you’re going to be in a much better place. 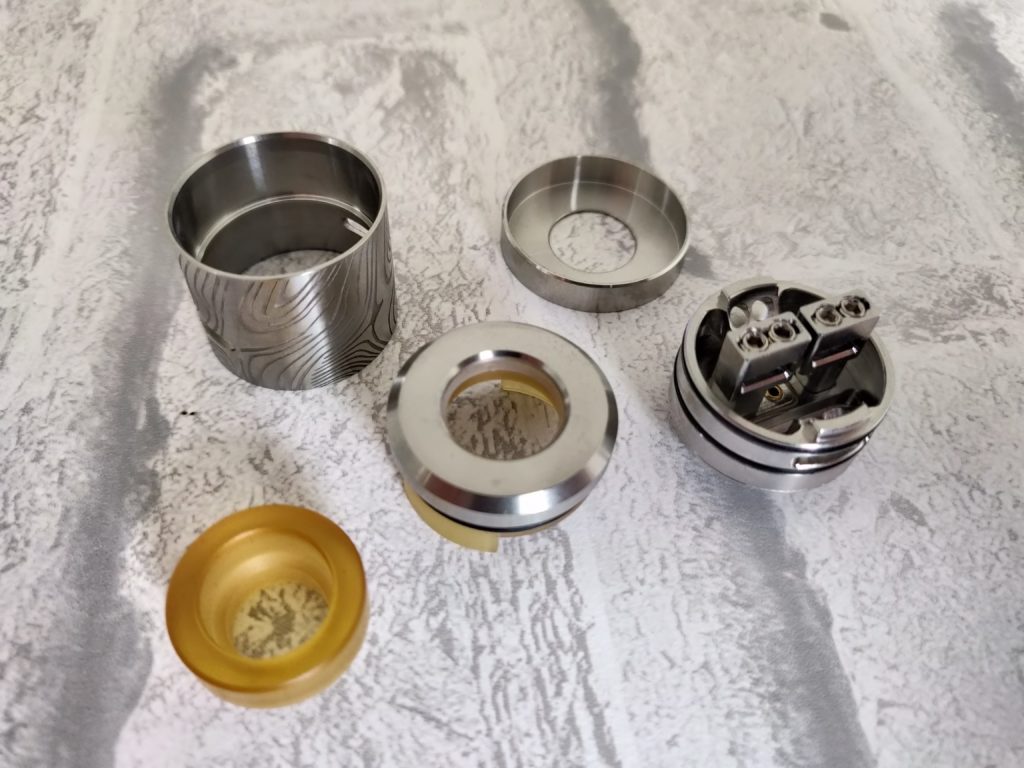 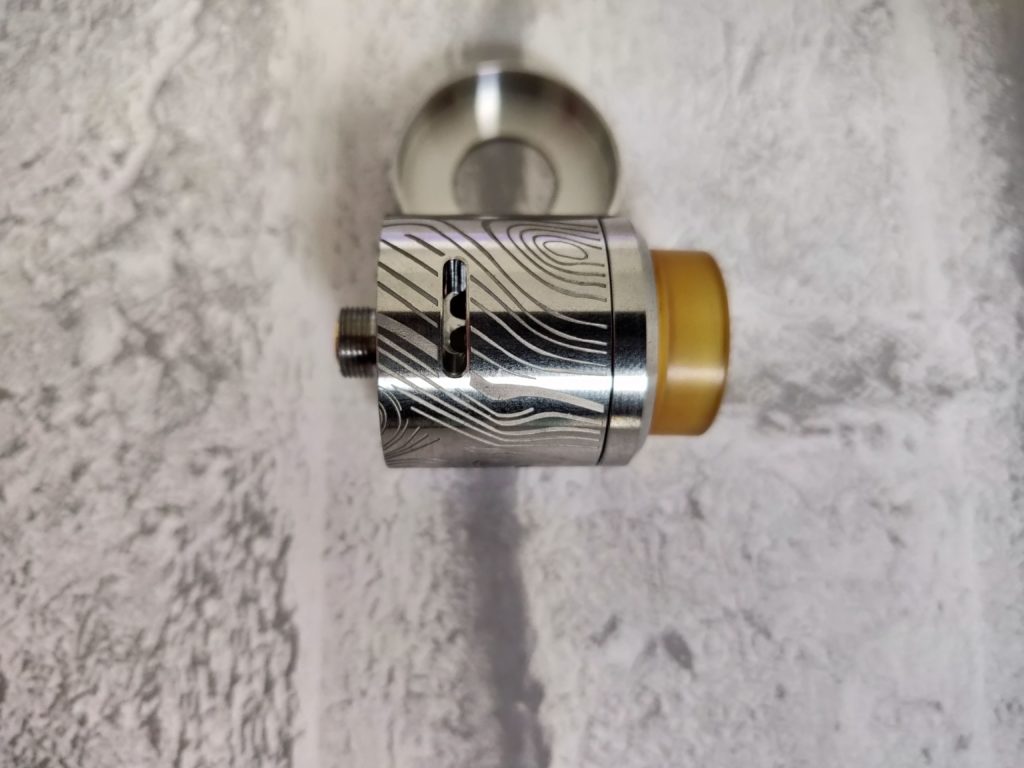 The Wood Effect Extends To The Tank

You can run that bad boy at 45-50W and, with moderate vaping, eek a day’s worth of vaping from it (just about, anyway).

In variable mode, it’s a completely different story. Once you’ve switched the boards around and placed the battery connector in, you’re basically rocking a dual-18650 mod.

And battery life, as with other dual-18650 mods, is very good indeed. All day good, in fact.

And this, I think… is the point of the Wismec Luxotic MF. You can use it as a squonk mod when you’re at home, then switch it to variable mode when you’re away from home (and spare cells).

The ONLY issue here is this: it takes WAY TOO long to make the switch around. Once you’ve done it a couple of times, you never really want to do it again.

Trust me, I’m five switcharoos in now and the thought of doing it even one more time makes me feel slightly ill.