When POD Mods run rampant, it’s good to see the revival of variable power 510 equipped mods. The Vaporesso Target 80 is a stellar mod that aims to bring the market back to the glory days.

The Vaporesso Target 80 doesn’t bring anything new to the table, but it brings back what has been sorely missed from devices as of late. The 510 connection absolutely makes one of my favorite devices of 2021. No longer are you bound by the manufacturers’ tanks or coils, but retain the POD Mod form factor.

Vaporesso has been a hit-or-miss company for me in the last few years. While none of their products were inherently bad, they lacked the charm the Swag series had. The PM80 was, eh, boring at best.

The Gen was rehashed into oblivion and so on it goes. The Target 80 takes a different approach and takes vaping back to the days where the user was ultimately in control. Okay, perhaps not a mech mod, but a proper 510 equipped mod with variable power? Yes, please!

The Vaporesso Target 80 is a stunner through and through. It has a POD Mod vibe to it, but there’s no denying that this is a full-on variable power mod in the traditional sense.

The chassis is covered in a dimpled armor-type shell, which contributes to its heft. It feels durable and at the same time, provides ample grip. Only the weakest of hands will drop this on a constant basis. The shell comes in a host of different colors while the chassis remains solid black throughout the range. Black, blue, red green, and red are all available colors, but I do expect a limited edition range of colors as per Vaporesso norm.

The front facia houses the 0.96″ TFT display that’s bright and sharp. Above the screen, you find a very clicky round fire button and right at the bottom, arranged in a clown face pattern, the 3 adjustment buttons and USB-C port. Three buttons for adjustment? Yes! The Axon chip not only has your standard up and down adjustment but makes use of a third button to confirm your selection. Not revolutionary, but certainly makes navigating the menu easier.

The true star of the show, and I’m shocked I have to say this, is the inclusion of a 510 threaded connection. The included GTX 26 Pod can be used on the Go 80 and Luxe 80, more proprietary shenanigans, but at least you have cross-compatibility if you insist on it. There’s also an included adapter to allow for the reverse.

Inside the chassis is a massive 3000mAh battery that’s about 30% larger than what’s found in similarly sized devices, but with a wattage range of 5 to 80w, you’re surely going to need all the battery you can get.

Being an Axon chip brings variable wattage, variable voltage, bypass, temperature control, and a pulse mode to the table

I’m glad to report that the Target 80 performs much the same as the Swag 2 but, with more headroom. The standard modes work flawlessly and power output is consistent across the range. Temperate control is good, but not amazing; it won’t burn your wick on an empty tank, but don’t expect the accuracy you would get from a DNA or Dicodes mod.

Pulse mode is where Vaporesso mods come into their own and the Target 80 is no different. Seasoned vapers might remember PWM (Pulse-Width Modulation) mods; this is what Pulse mode feels like. Instead of a constant ramp-up to your desired wattage, the Target 80, well, pulses within a controlled range. In theory, this reduces the required power delivered by an electrical signal. You’ll hardly notice it if not paying attention, but the end result is a step up from regular power modes and is the same feeling that made PWM mods so popular back in the day.

The internal 3000mAh is quite a bit bigger than most of the competition but comparable to the Voopoo Drag S Pro. It’s certainly sufficient for most use cases, but I certainly won’t run an ultra-low resistance dual coil build at 80w on it. Running a single coil RTA, mesh atomizer, or even a dual coil at low wattages would be ideal and should net you a day worth of juice. As a low-wattage MTL device, this is fantastic.

The included GTX26 tank makes use of the Vaporesso GTX range of coils and, as we know by now, are fantastic. The GTX coils provide great flavor and longevity. As good as it is though, I’d dunk the tank from the get-go and screw a proper single coil rebuildable on the Target 80 and have a hard-as-nails everyday carry device. The armor shell does well to protect the device from drops and bumps which makes the Target 80 reliable to boot. It’s perhaps not as hardy as an Aegis Legend, but it’ll do the job.

The Vaporesso Target 80 doesn’t bring anything new to the table, but it brings back what has been sorely missed from devices as of late. The 510 connection absolutely makes one of my favourite devices of 2021. No longer are you bound by the manufacturers tanks or coils, but retains the POD Mod form factor.

It’s not bold either, it’s just a really solid device, that looks good, performs well and has the battery capacity to keep you going.

The Vaporesso Target 80 doesn’t bring anything new to the table, but it brings back what has been sorely missed from devices as of late. The 510 connection absolutely makes one of my favorite devices of 2021. No longer are you bound by the manufacturers’ tanks or coils, but retain the POD Mod form factor.

I’ve been using the MiPod 2.0 for months now and it has been amazing. The flavor is outstanding and the coils last for weeks and weeks. Add in solid battery life via its 1250mAh battery and it is easy to see why this pod is Team VapeBeat’s current favorite. 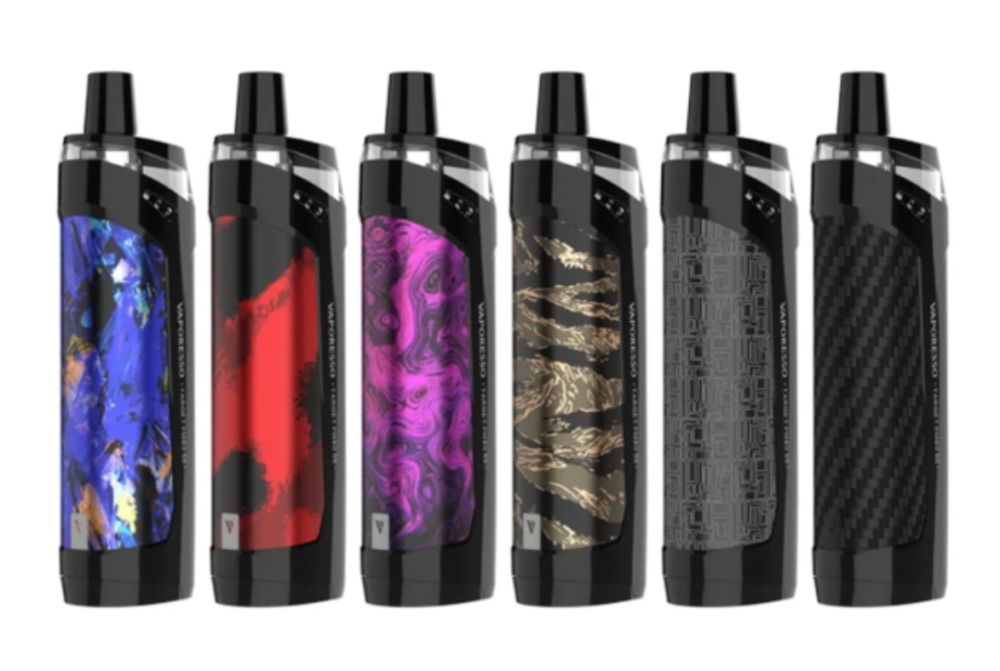