The Eleaf Pico Squeeze 2 is a portable squonk mod that comes with a decent(ish) single coil RDA. Does it tick the right boxes though?

When it comes to squonk mods, you’re spoilt for choice – there’s a myriad of great options around.

And most of them are pretty reasonably priced.

So how does the Eleaf Pico Squeeze 2 fit into this mix?

Well, it’s got a solid brand rep behind it, the Pico line of mods are very well regarded, and it’s made by Eleaf – a company that knows its stuff.

On paper, at least, the Eleaf Pico Squeeze 2 should be a resounding success.

But does it cut the mustard in reality?

I just spent two weeks using it as my daily driver to find out.

Read on for my full review! 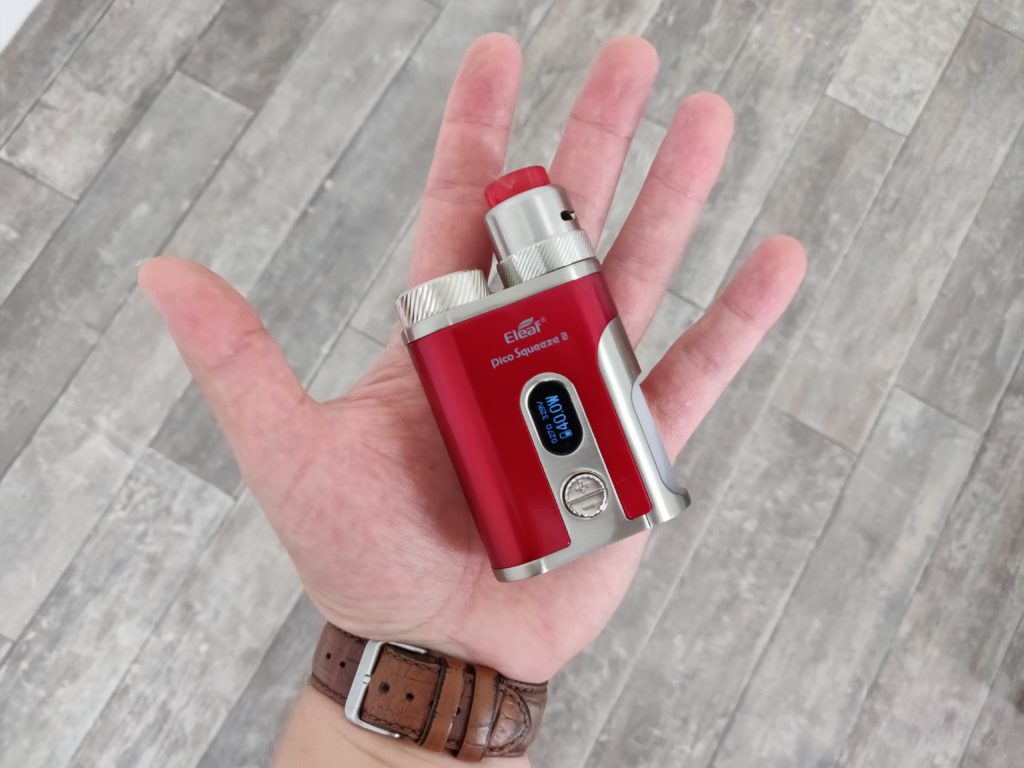 My test unit was red, and I kind of get the feeling that the design of the Pico Squeeze 2 will divide opinions.

If it was a car, it’d be a smart car – it’s odd to look at. Weird angles and rounded design language just tend to have that effect.

It’s portable enough, though, and to be honest, I do kind of dig its styling. But I have always been a fan of the Pico range of mods. 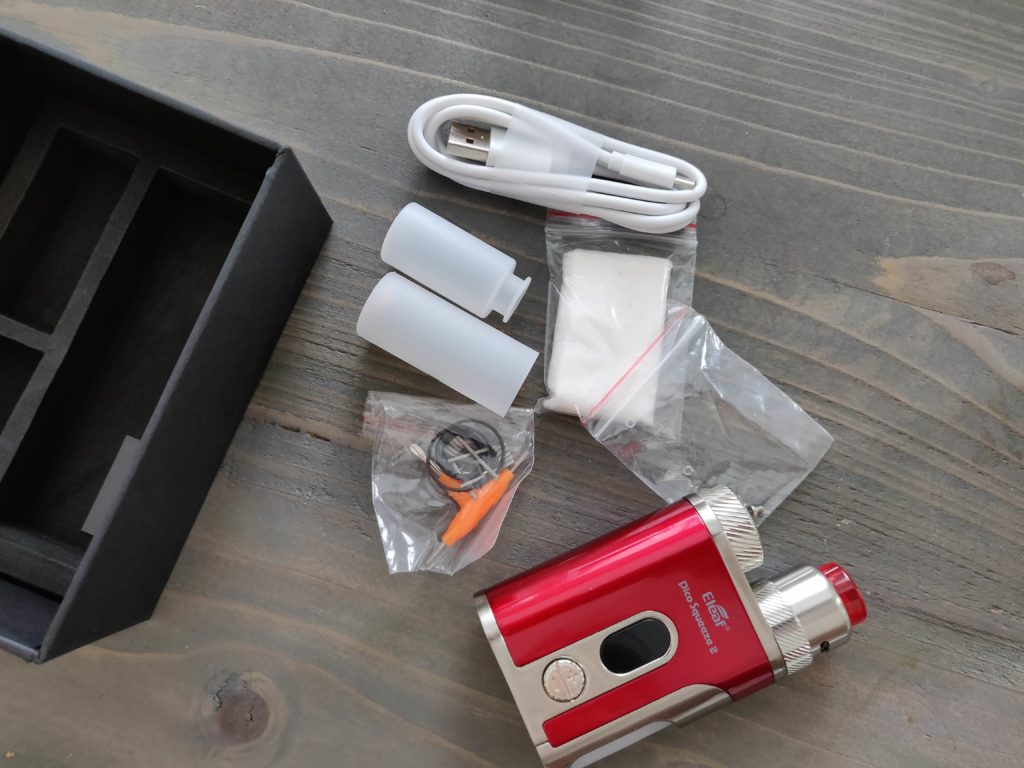 This is a squonk mod, a regulated one, and the device’s design is built around this in a bid to make it as intuitive as possible.

You also have support for TC vaping and Bypass Mode, though I mainly stuck with power mode vaping.

The bottle is located at the bottom, on the right. It’s easy to access with your thumb for squonking, while the fire key is located on the back and is kinda small. 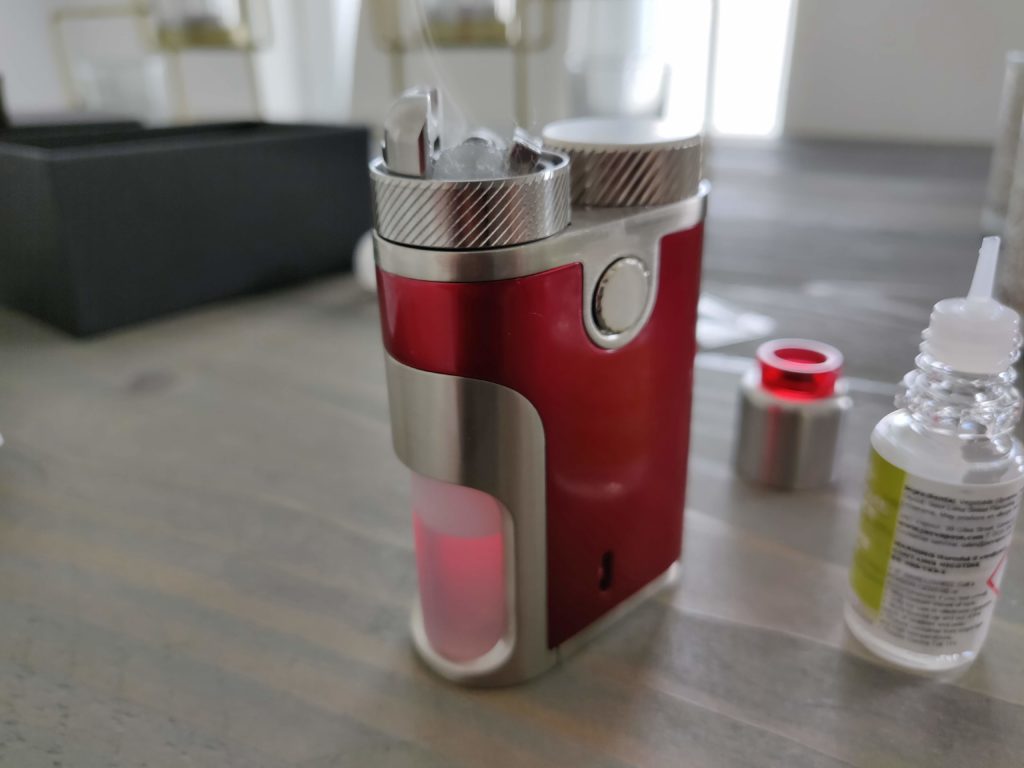 The Bottle Lights Up When You Hit The Fire Key

On the front, you have a small display and an even smaller power rocker for upping or downing the watts. And that’s about it for buttons and moving parts.

The battery, it takes 20700mAh unit, sits in the left-hand side of the device and protrudes from the top of the mod, though it is covered by a beveled cap, a design quirk no synonymous with Pico devices.

If you like the traditional Pico design, you’ll probably dig this mod. However, a couple of people did express concern over the button placement when I posted a picture of it on Reddit.

I do kinda like the way it looks, it’s certainly quirky and pretty unique looking. It is also pretty small too, so I can see a lot of female users really digging this one – my fiancé really liked it! 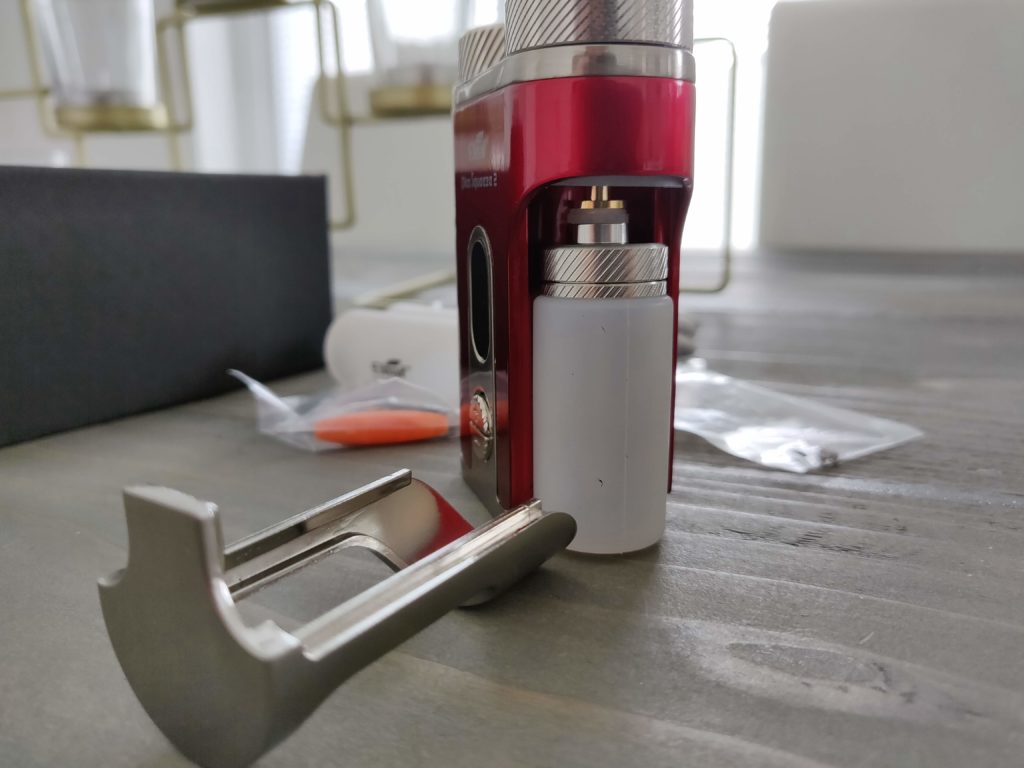 And the Pico Squeeze 2’s squonking abilities are pretty solid, though the physical mechanism which holds the bottle inside the mod could definitely be better.

If you knock it, ever so slightly, the bottom connector simply pops off; this happened a couple of times while I was driving and was super annoying. 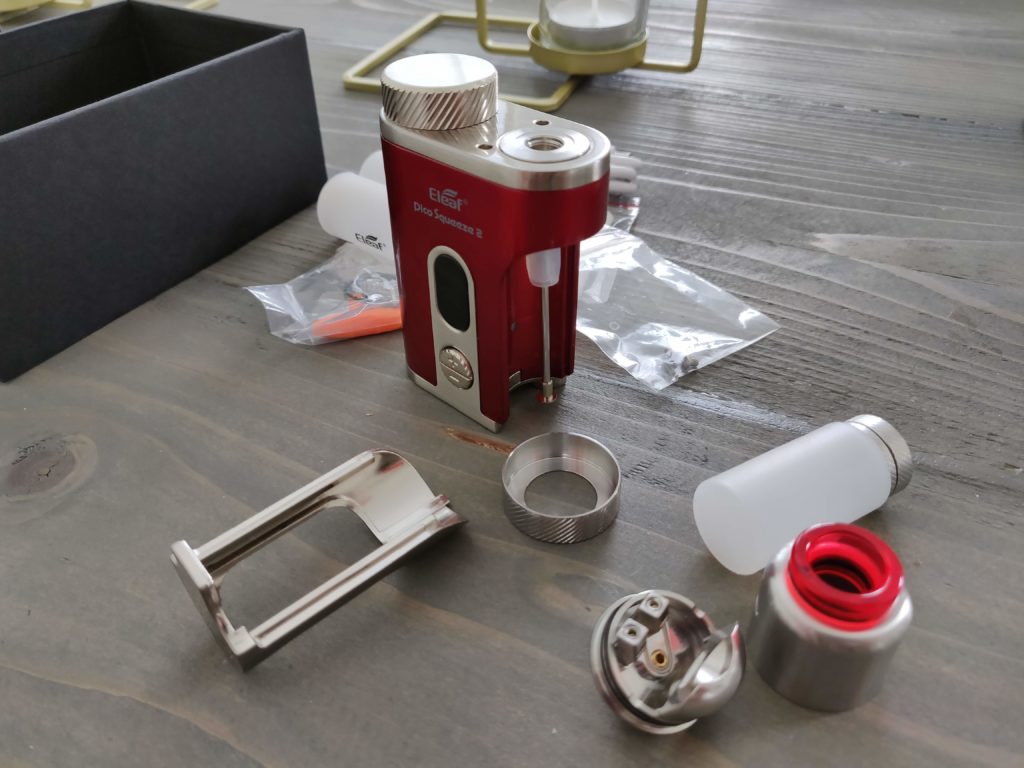 The magnets just aren’t strong enough, all it takes is a slight brush and, PLOP… it’s fallen off.

The squonk bottle itself holds a very respectable 8ml of E Juice and, once installed, sits pretty firmly in place.

It can be tricky to align when you’re putting the unit back together, so make sure you orient it correctly – I didn’t do this the first couple of times. 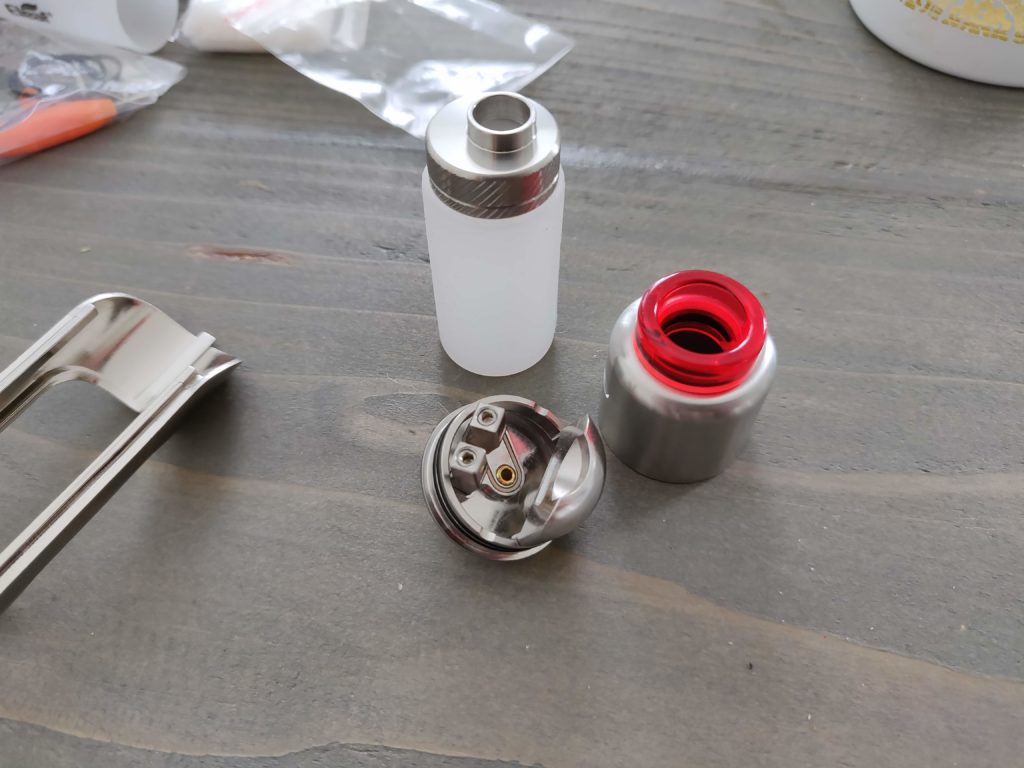 Once it’s all setup correctly, and your bottle is full of E Juice, you’re pretty much good to go for the rest of the day.

You don’t need to push too hard to squonk E Juice, but there is definitely some trial and error before you find the optimal squeeze for the bottle.

Overall, the Pico Squeeze 2 is a solid little squonk mod. And, as an added benefit, it’s regulated too, so, if the mood takes you, you can run it in TC mode.

Why you’d want to do this with an RDA, I don’t know… But the option to do so is there. 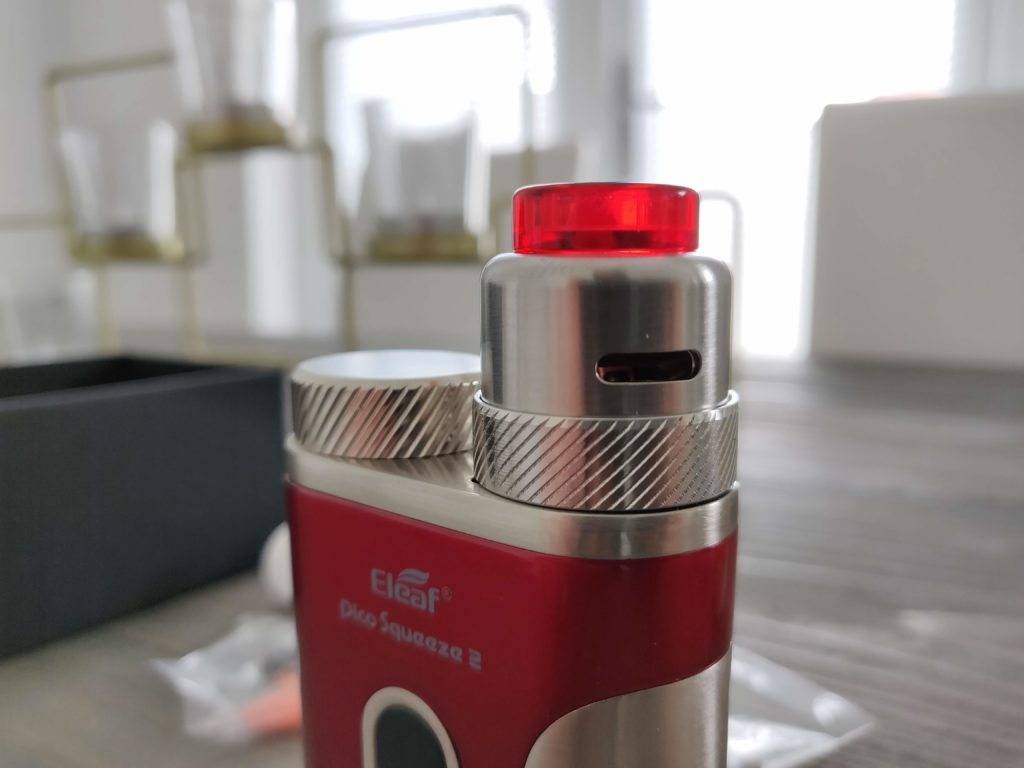 I wasn’t expecting much, but this little chap really impressed me over the weeks.

The flavor is great, and it’s very easy to set up. The airflow is also nice and smooth. Plus you have plenty of juice well for squonking juice into – it seldom leaks. 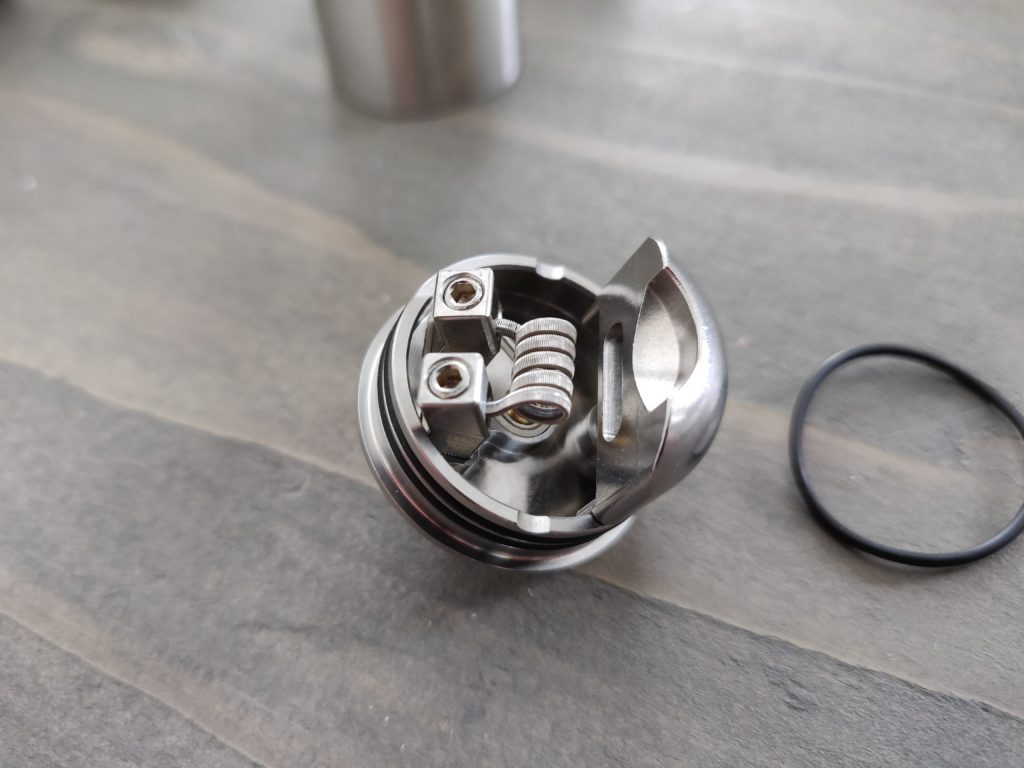 You do have to clip the leads before you install them, in a similar fashion to the Dead Rabbit RDA, but this is really the only tricky aspect of setting up the Coral 2 RDA.

The airflow on the Coral 2 RDA is specially designed to send air directly to the coil and at close proximity. This ensures a cool, flavorsome vape.

Is it better than the Pulse RDA or the Recurve RDA? No – not even close, but as a “kit-RDA” it is very, very competitive. It also comes with a pretty decent flat-Clapton coil as well (plus some cotton).

You have a maximum of 100W to play with on the Eleaf Pico 2 Squeeze.

And that’s fine – 100W is more than enough in most cases.

Overall performance is very good. It fires instantly, and while TC mode feels a little wonky, it does work and is there if you need it. 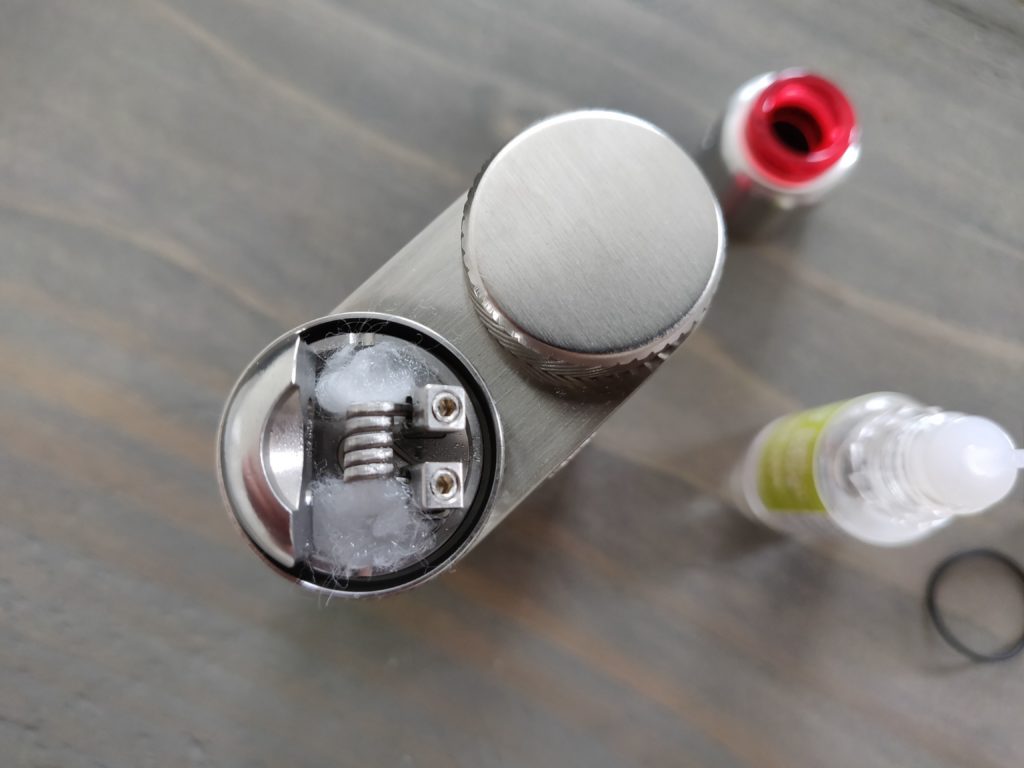 I didn’t have any real issues with the mod during my test. I just did what was expected of it, producing massive clouds and plenty of flavor.

The HUGE squonk bottle also ensures that you only really need to refill once a day, which is very handy.

The one thing I did struggle with, however, was the battery life.

For this reason, with single-celled mods, you DEFINITELY do not want to be running anywhere near 100W if you want even remotely decent battery life.

This is my biggest gripe with the Pico 2 Squeeze: the battery life just isn’t good enough.

This is mainly why I don’t use single-cell mods, unless I’m using them with a Kayfun tank or an RTA I can run at 35-40W.

You’re OK up to about 60W with respect to battery life, but anything above this just KILLS your battery life.

All The Color Options

I ran the Coral 2 in and around 50-55W most of the time and was consistently getting around 6-7 hours of use, which isn’t exactly great.

But this is the case with ALL single-cell mods. Even more so with ones that only run on 18650 cells.

Most of the time, battery life will depend on how much you vape.

I vape A LOT, so I’m pretty harsh on cells.

You might be different, but the general rule of thumb I use is this: dual-cells are ALWAYS better than single cells when you’re talking about high-power vaping.

The 20700 cells do make a difference, and I would advise you use these types of cells in the Pico Squeeze 2, as it will give you about 30% more battery life.