Stanton Glantz Caught LYING About The Dangers of Vaping (AGAIN…)

The dangers of vaping have been a topic of discussion for, well… as long as I can remember. So why the hell would a supposed scientist, a ***professor*** no less, take to Twitter and tell people that they’re better off SMOKING than vaping? Simple: because he is a LIAR…

The dangers of vaping have been a topic of discussion for, well… as long as I can remember.

Most progressive thinkers, however, now tend to agree that vaping is better than smoking – the UK’s Public Health England says it is 95% safer, for instance.

Ditto Nicotine & Tobacco Research, Society for The Study of Addiction, the National Institute of Health, Science Direct, and many more besides…

Inflating The Dangers of Vaping – A Glantz Story…

The alleged dangers of vaping – basically – are dwarfed by the negative effects of continuing a smoking habit.

So why the hell would a supposed scientist, a professor no less, take to Twitter and tell people that they’re better off SMOKING than vaping?

I mean, who would do this? What kind of person, given the huge amount of data that shows vaping is not only safe but our best bet for killing smoking inside a generation, would think this is OK?

An ideological douchebag. And this douchebag goes by the name of Professor Stanton Glantz, who is a professor at UCSF. 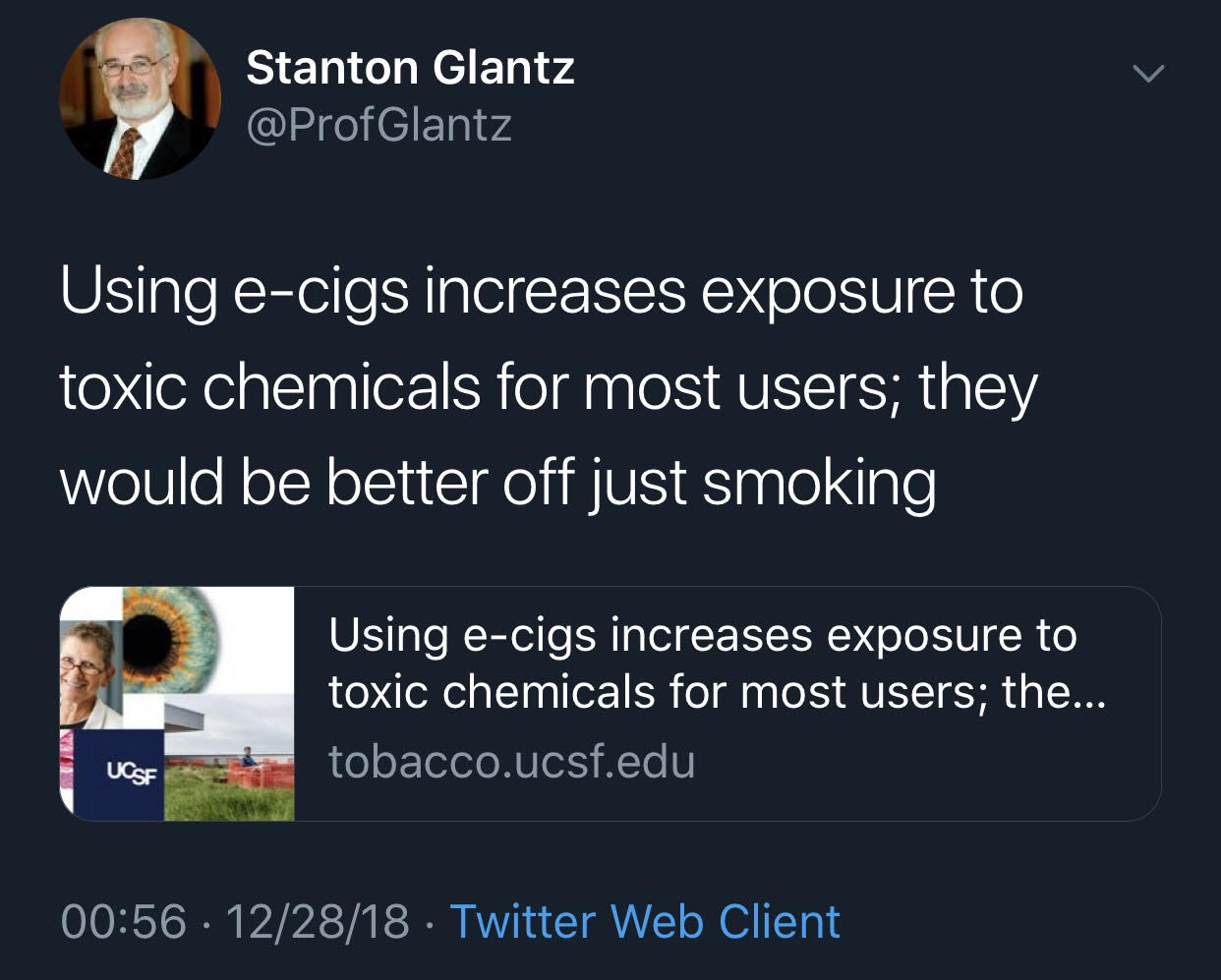 So What Are The Harmful Effects of Vaping Glantz is Referring To?

Glantz is referring to a paper published by his very own UCSF, but here’s the rub: he basically ignored its findings.

The conclusion of the paper goes as follows: “Use of e-cigarettes appears to be associated with exposure to known tobacco-related toxicants, but the exposure is reduced compared with cigarette smoking.”

So… why the tweet? Why tell people to smoke instead of vape?

Glantz is currently getting his ass handed to him in the comments section of that paper. Even Bloomberg Opinion columnist Joe Nocera waded in to call Glantz a fraud.

Still, the wily professor is sticking to his guns, claiming that most vapers “dual-use” (meaning: they smoke and vape at the same time).

Smoking is 100% not safe, we all know that. And while you’re definitely better off doing neither, both the NHS and Cancer Research now agree that vaping is 100% the best way to quit a smoking habit on the spot.

Take the Royal College of Physicians’, or the NHS’, or Public Health England…

Just whatever you do… DON’T tale Stanton Glantz’s!

When it comes to the topic of your health, all you can do is do your own research, test things, and read a lot of information. This applies to diet, exercise, and mental health.

Doctors and researchers are great, and there’s a ton of good ones out there, but they don’t know everything and they certainly aren’t infallible.

Glantz proves this point heroically; he’s an anti-tobacco guy that’s got a bee in his bonnet about vaping.

He’s made his mind up about it and nothing will sway him – not the NHS, not Public Health England, not even the National Institute of Health…

And this is fine, he’s entitled to his opinion. I don’t like Coldplay, but I would never begrudge anyone going to one of their concerts or listening to their music. It’s up to them what they do. Not me.

However, when a professor – a scientist – abuses his position to push lies that are harmful and frankly dangerous, things have to be said.

That tweet alone should be enough to land the professor with a disciplinary hearing.

Keep in mind that doctors have been struck off for far less.

So, rather than listen to this ideologue, do your own research and trust ACTUAL data collected by proper scientific institutions and papers.

Don’t know where to find them? Here are 10 Studies About Vaping The FDA 100% Does NOT Want You To See…