When it comes to squonk atomizers, you now have A LOT of choices. But one of the most popular options is the Wotofo Recurve RDA

But I just kind of forgot to review the Wotofo Recurve RDA. Don’t ask me why, as I was using it ALL the time.

It just slipped my mind. These things happen.

But I’ve now FINALLY gotten around to writing up my review of the Wotofo Recurve RDA, a cheap little RSA that I am now very fond of.

I’ve used it on multiple mods during the past few months, taken it on holiday, and basically vaped the crap out of it – the only thing I forgot to do was actually review it.

Right, enough fluff – let’s get down to it. 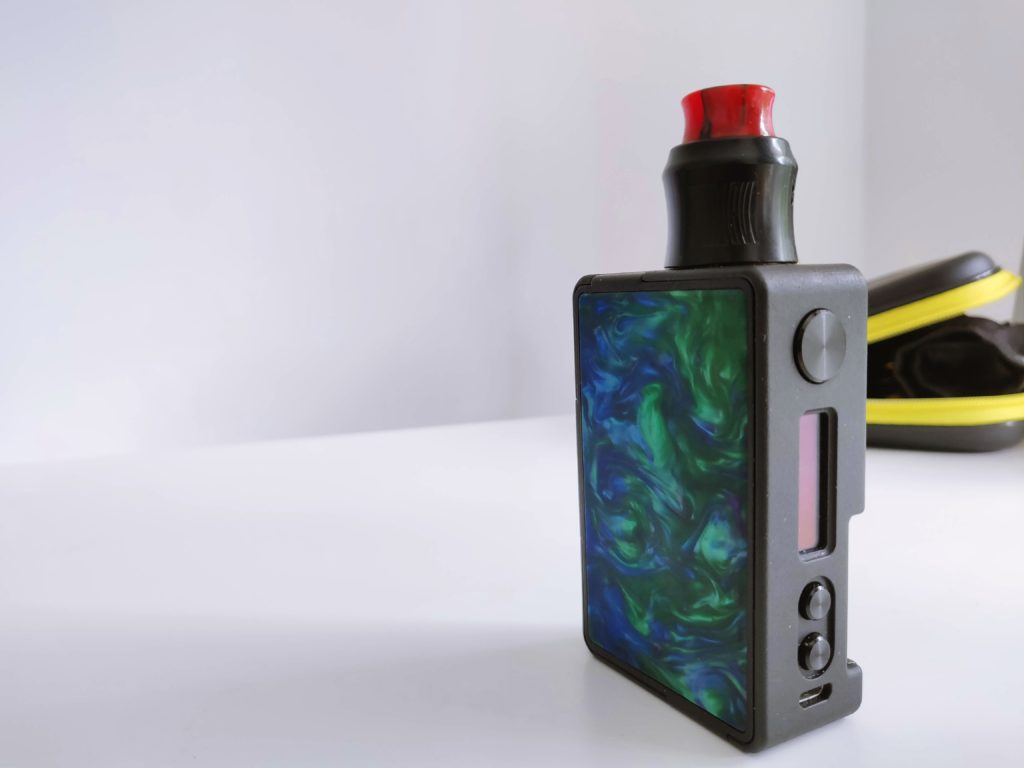 The Wotofo Recurve RDA is designed for use on squonking mods; it’s a true RSA (rebuildable squonk atomizer) in this regard, though you can run it without a squonk pin.

It’s a single coil RDA, meaning you can run it lower wattages and still get plenty of bang for your buck.

If you’re using a single cell squonk mod (the vast majority of them are single cell mods at present), then a single coil RDA like the Wotofo Recurve RDA is must have.

They use less power, consume less juice, and they vape just as good as their dual-coil brethren.

The Wotofo Recurve RDA is perhaps the most easily recognizable RDA around at the moment. And this is ALL down to its sloping-sides design, which I really dig.

My unit – the one I bought – is the black one with the red drip tip. It’s available in a bunch of other colors, but I like my tanks like I like my metal. 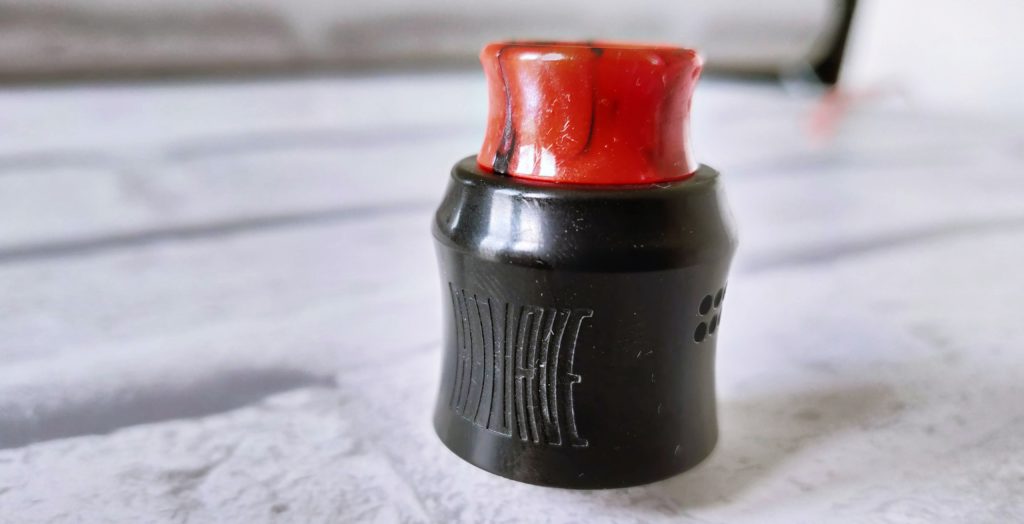 You get an 810 drip tip in the pack, as well as tons of additional accessories (coils, cotton), and it’s a very pleasant tip to use. I had no problems with it. I also love the resin treatment on it too.

The airflow sits on the side and is adjustable by twisting the top cap. It works, but it isn’t without its problems. To be honest, once I found what I liked (wide-open) I just left it at that.

The problems arise when you’re trying to line up the air holes; it’s kind of hard to line them up as they’re so small and so close together. Minor point, I know… but it did annoy me on a few occasions.

The Wotofo Recurve RDA was designed by Mike Vapes in conjunction with Wotofo.

I like Wotofo a lot too; when it comes to cheap RDAs, they’re always worth a look. Mike Vapes is also a solid dude and a very good reviewer.

And the deck on this thing is kind of testament to both of the above statements. It’s easy to build on, has ample room, and, when it’s set up correctly, it vapes like a freakin’ Megalodon.

Like the tank itself, the deck is curvier than a sleepover at the Kardashians, and this gives you ample room to get coils of all shapes and sizes in there. 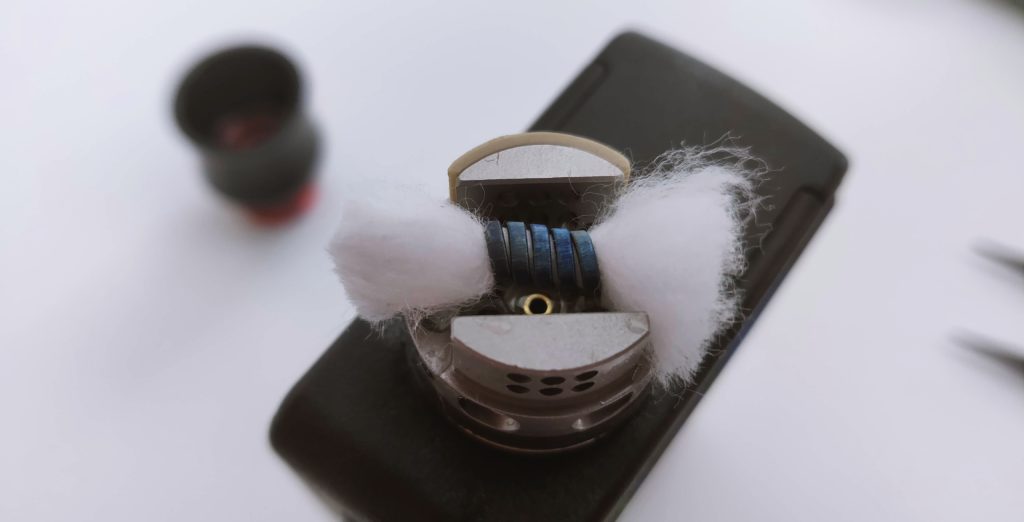 The install is pretty simple, though you do have to snip your leads (6mm) before installing them. You can snip afterward, but I find it much easier to do it first – just remember: the leads need to be 6mm.

Freakin’ great. You literally cannot over squonk this tank.

Through some kind of engineering/black magic, the Recurve RDA manages to hold the juice inside it, even when it looks like it’s about to seep out.

How this works is down to surface tensions, or some other kind of physics, that I don’t entirely understand.

Bottomline: it’s bloody great. So if you’re a little trigger happy on the squonk bottle, this one will suit you down to the ground.

One of my ALL-TIME favorite flavor RDAs was made by Wotofo; it’s called the Wotofo Lush Plus RDA and it is utterly fantastic. I still use mine even to this day (that’s how good it is).

For this reason, I always associate Wotofo RDAs with good flavor. And for the most part that’s true; they’re usually very good in this regard. 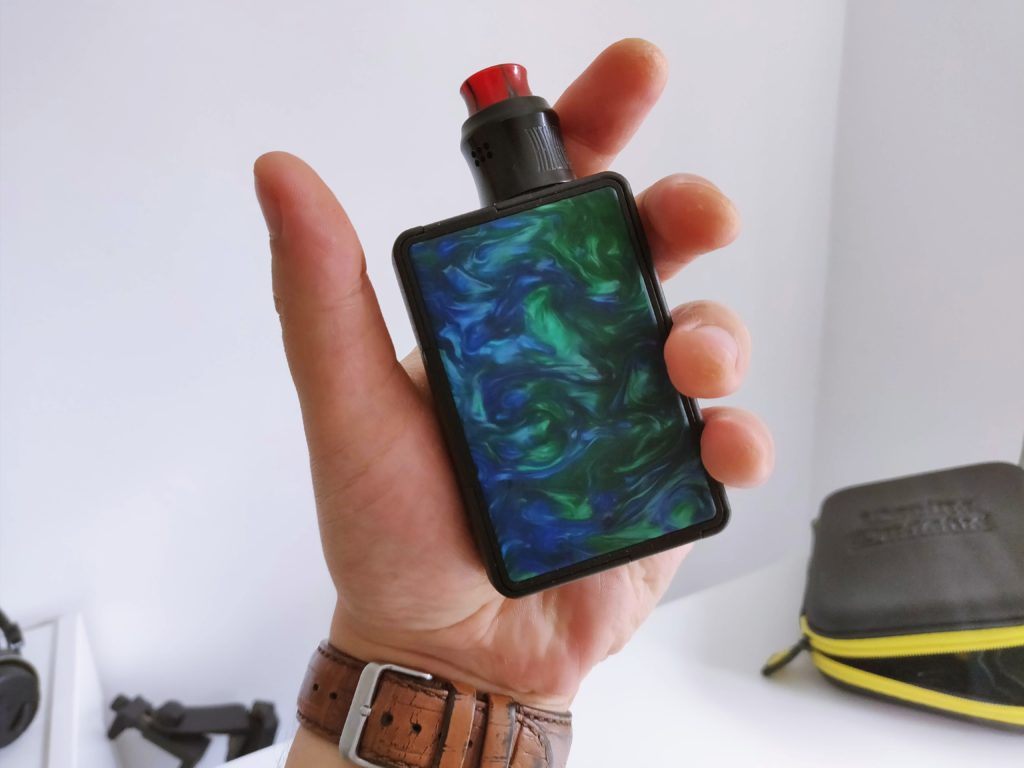 The Recurve RDA, however, takes things a step further. The flavor you get from its single coil deck is fantastic. I don’t think it’s quite as good as the Lush Plus RDA, but it does squonk – and the Lush does not.

I would go as far as saying it kicks out some of the best flavor I’ve had to date from a single coil RDA. And I’ve tested a bunch this year.

It’s better than the Wasp Nano RDA and the Drop SOLO RDA, for instance. Much better.

My only dislike about the Recurve RDA is that it’s really hard to set the airflow.

The adjustment mechanism is tricky to line up and adjust; you can’t really ever see what you’re doing.

Once you have it set though the airflow on the Recurve RDA is beautiful, lovely and smooth. There’s zero turbulence and the flavor hit is immense from the get-go.

The deck is also very forgiving and easy to work with.

For me, the Recurve RDA (save for its wonky airflow mechanism) has all the hallmarks of a classic single coil RDA.

It looks BADASS, vapes like a champion, and is a complete flavor monster. It’s also really well priced too.

For me, this is now my go-to single coil RDA for squonking. I’ll use it on all my squonk mods until something else better comes along.

But considering how good this RDA is, I think I’ll be waiting quite sometime before that happens…