Suorin was one of the first refillable pod systems when they released their popular Drop and Air devices over two years ago. Suorin has continued to release updated versions of their products, with new ideas here and there. So how does the new SHINE stand out in an overwhelming sea of pod systems?

Suorin Keeps Up With Their Legacy

It’s hard to believe that over two years has passed since pods started dominating the market. Suorin was the first I remember seeing in the local vape shops. They released the Suorin Air and the Suorin Drop around the same time.

And I can’t lie. I worked in the retail side of the industry for years and I learned to appreciate the simplicity of these device. Especially among new vapers that just really wanted to quit smoking, yet wanted something easy to use and discrete.

So how does the new era of Suorin products stack up to their influential legacy?

The new Suorin SHINE is familiar in design. It has the same type of shape, the same pod designs, and the same LED indicator that all of their devices share. But the SHINE has a few perks that I wasn’t expecting when I first opened the box. First, the specs: 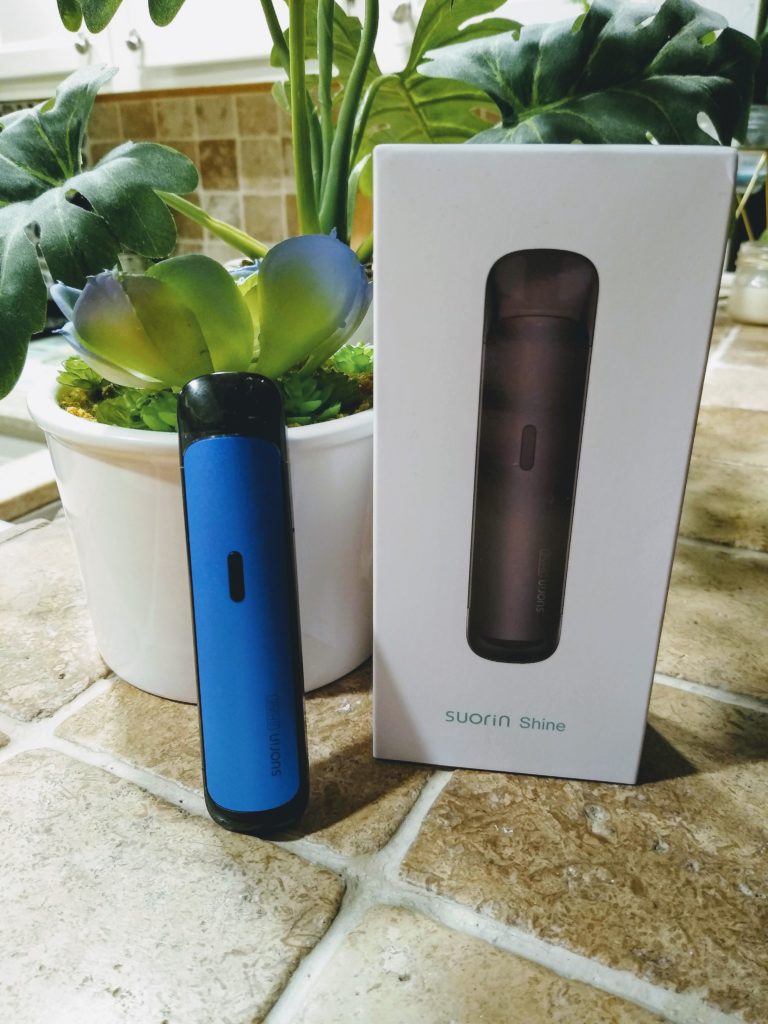 Inside the box you will find your device, 2 empty pods, a Micro-USB, and a warranty card. My sample is a great looking blue accent color and all models have black as a base color. The device is very light-weight and compact for housing a larger battery.

The pods are the usual tinted black pods that Suorin has always used. Each pod has a small 1 ohm round-wire coil in the middle that is wiked with 100% organic cotton. The pods are advertised to last for up to 5 refills, equal to about 300 puffs.

There is a large LED at the bottom of the device that implies the name, SHINE. The battery light is green at full charge, blue at 30-60% charge, and red below 30%. The 700 mah battery life is larger than it’s competitors like the Caliburn and it charges in only 40 minutes.

The device operates in two different modes. This is a new feature for Suorin as their products are usually auto-draw only. The SHINE has a button that fires the device at full power as well as the auto-draw function. 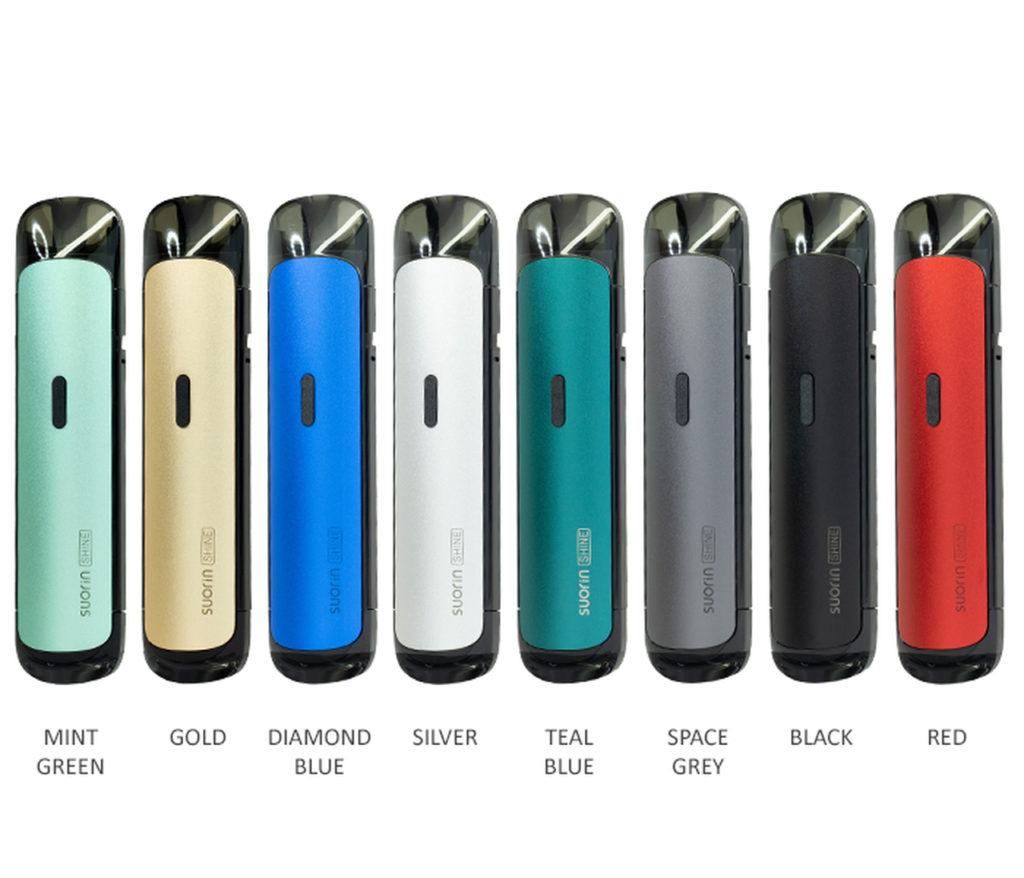 Get ready for some Caliburn references because to be honest, the SHINE is very similar. It works the same with having a button/auto feature, however the SHINE beats the Caliburn in the battery department. The use of a cartomizer style coil is also a nod to the Caliburn and the design is almost identical.

I have been using the Suorin SHINE for about a week as an “out and about” vape. When I first got it, I filled each of the pods with a different style of flavor so I could better gauge just how good the new coil technology is. One pod has a sweet menthol flavor, and the other has a creamy dessert flavor.

After the initial break-in time, the flavor really shines in both pods. I am pretty blown away at Suorin’s new coil design and pitted against the Caliburn…the SHINE wins! Before you question my sanity and judgement, I tried the Caliburn and the SHINE back to back with the same flavor.

To be fair, you can also easily compare the SHINE to the Smok Novo also. Since the smooth but airy puff is very similar. Not to mention the aesthetics, with the SHINE just being slightly longer than the Novo.

I found that there wasnt much of a difference between the two power functions. I guess what it comes down to is preference of using the button or not. Once again, I found the Caliburn to be the same as far as function goes. Sometimes I hit the button and sometimes I just take a puff.

I let the battery get to the point of the device cutoff. The charging process took 45 minutes, just as advertised. I got all day use out of the device before I finally got the red LED of doom. Pretty Impressive!

Other companies are definitely catching up. Suorin is no exception in this category. I like the SHINE just as much if not MORE than the Uwell Caliburn. All the things that make up a great pod system are here in the SHINE and if you’re looking for something to challenge your beloved Caliburn, then I say give the SHINE a chance.