If you’re rocking a box-mod with removable batteries you NEED a recharging device, and the NITECORE DigiCharger D4 is EASILY the best vape battery charger in the business right now. Nothing else comes close for performance, safety features, and reliability…

It also has a relatively unassuming price tag of around £20-$30, depending on where you look, but do not be fooled by its boring exterior…

This little piece of kit is a must-have for anyone that uses rechargeable batteries in their box-mods and/or vape sticks.

Or, anyone that has a lot of remotes and/or console controllers in their home because the NITECORE DigiCharger D4 will re-charge ALL of them.

I’ve been using mine for almost five years now, so it’s about time I got my thoughts in order and passed on a verdict on this awesome little charging machine. 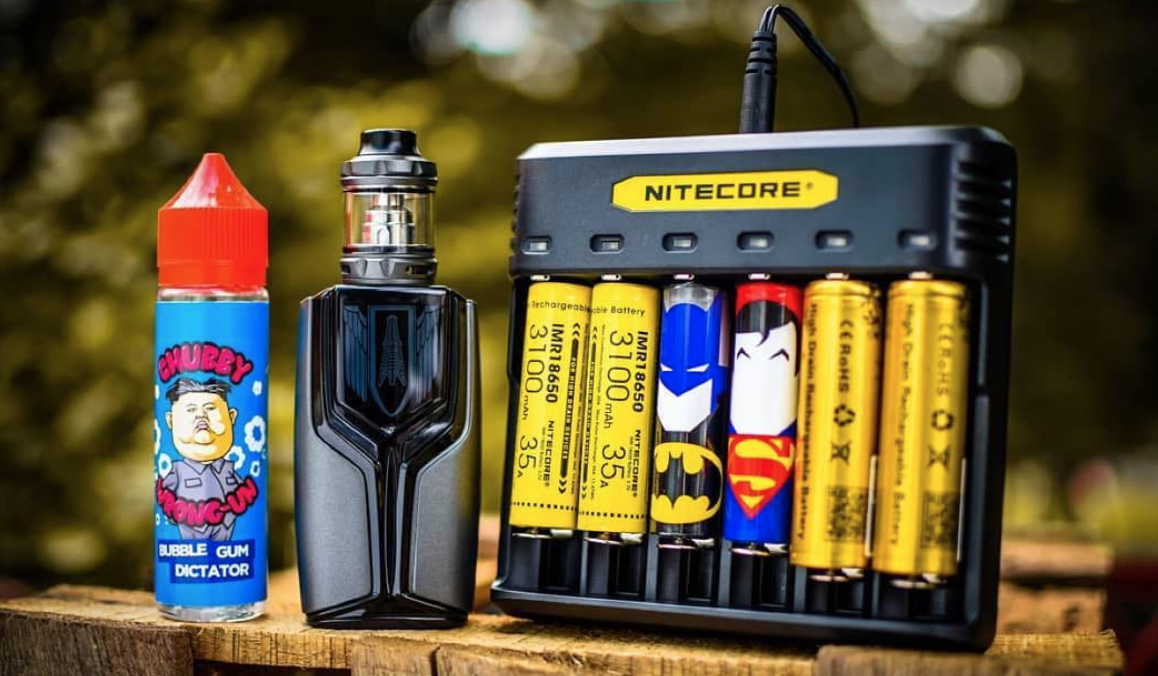 NITECORE: AKA The Best Vape Battery Charger Range In The Business – See ALL Models Here

It kind of looks a bit like something you might see in the Alien universe, a digital/ analog decoder, decked out in black and yellow, stuffed aboard one of the Weyland-Yutani’s corporations freight vessels.

Needless to say, it looks retro as hell and this means it looks pretty cool.

And if Weyland-Yutani chic isn’t your thing, well, there’s no cause for concern because it is so small it can be hidden away from view pretty much anywhere.

Exact measurements for the charger are 143mm x 99mm x 36mm and it features four charging slots which can, thanks to their spring-loaded battery plates, accommodate four batteries of varying size, shape, and gait at any one time.

The whole look, feel and composition of the NITECORE DigiCharger D4 screams robustness.

You can tell it’s a well put together piece of kit, one that will probably last you a decade or two, just by looking at it.

Hell, it even travels well –– I recently took mine to New York and back.

A vape battery charger isn’t the most glamorous of things you’ll buy this year but they are a complete necessity for most vape enthusiasts these days.

I’ve checked out a few chargers in the past few months and this one is by far and away my favorite.

It’s PACKED with features and, for a battery charger, something that will, in 99.9% of cases, live under a desk collecting dust, it actually looks pretty cool. 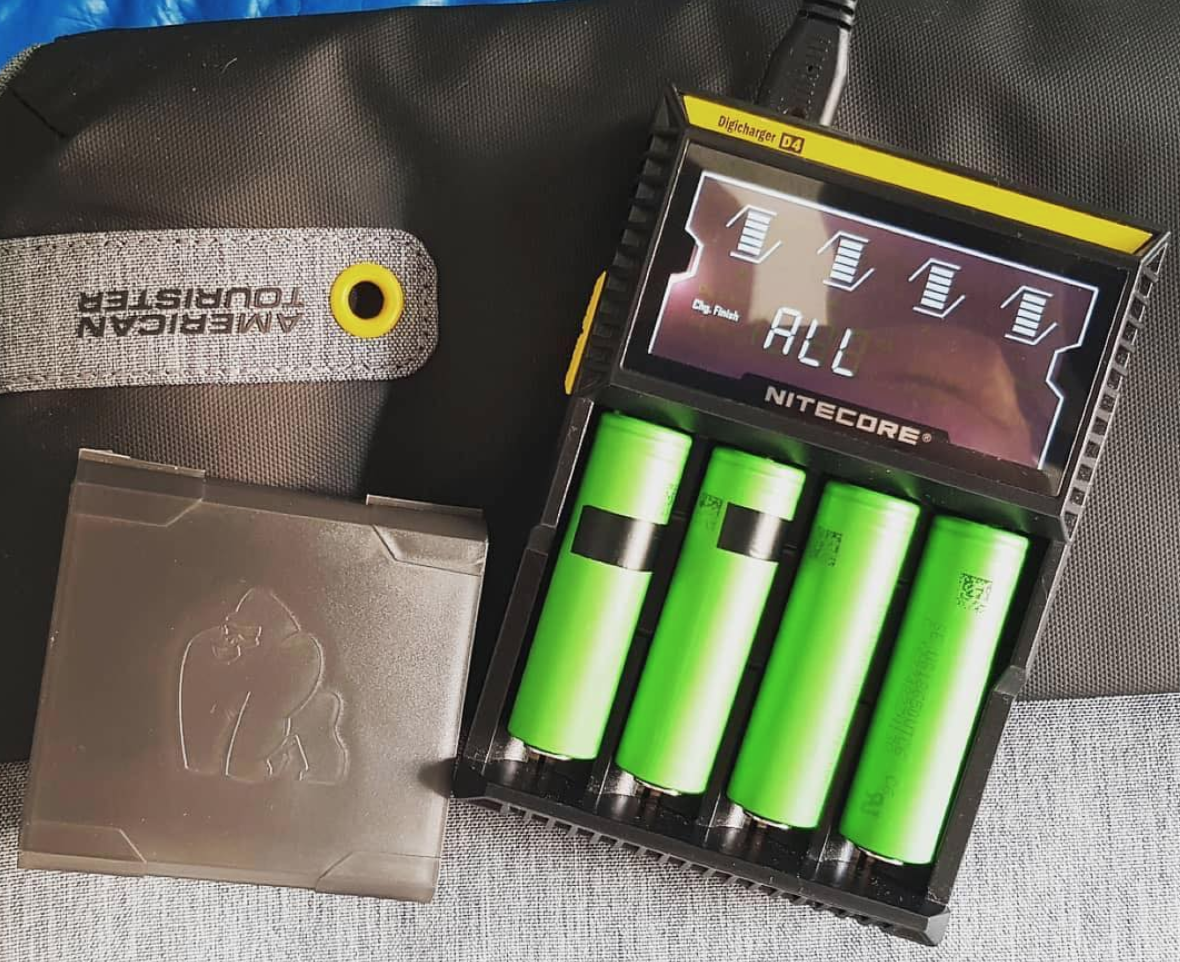 The D4 – AKA The Benchmark For Vape Battery Chargers. I’ve Had Mine For Almost Five Years Now!

Basically, if you have a rechargeable battery in your home and its cylindrically shaped, chances are this thing will charge it.

The NITECORE DigiCharger D4 is also a rather smart little charger too and is packed full of awesome features and quirks.

Inside the DigiCharger D4 is a microprocessor and while it might not be quite as smart as the one inside your mobile phone it can still pull off some pretty nifty tricks.

The best though is that it can tell, as soon as you insert a battery, exactly what type of cell it is and how best to charge it and, importantly, when to stop, meaning no more over-charging issues –– like IMR batteries exploding, for instance –– when you leave it on all night.

The DigiCharger D4’s crystalline LCD display is another stand out feature for me. 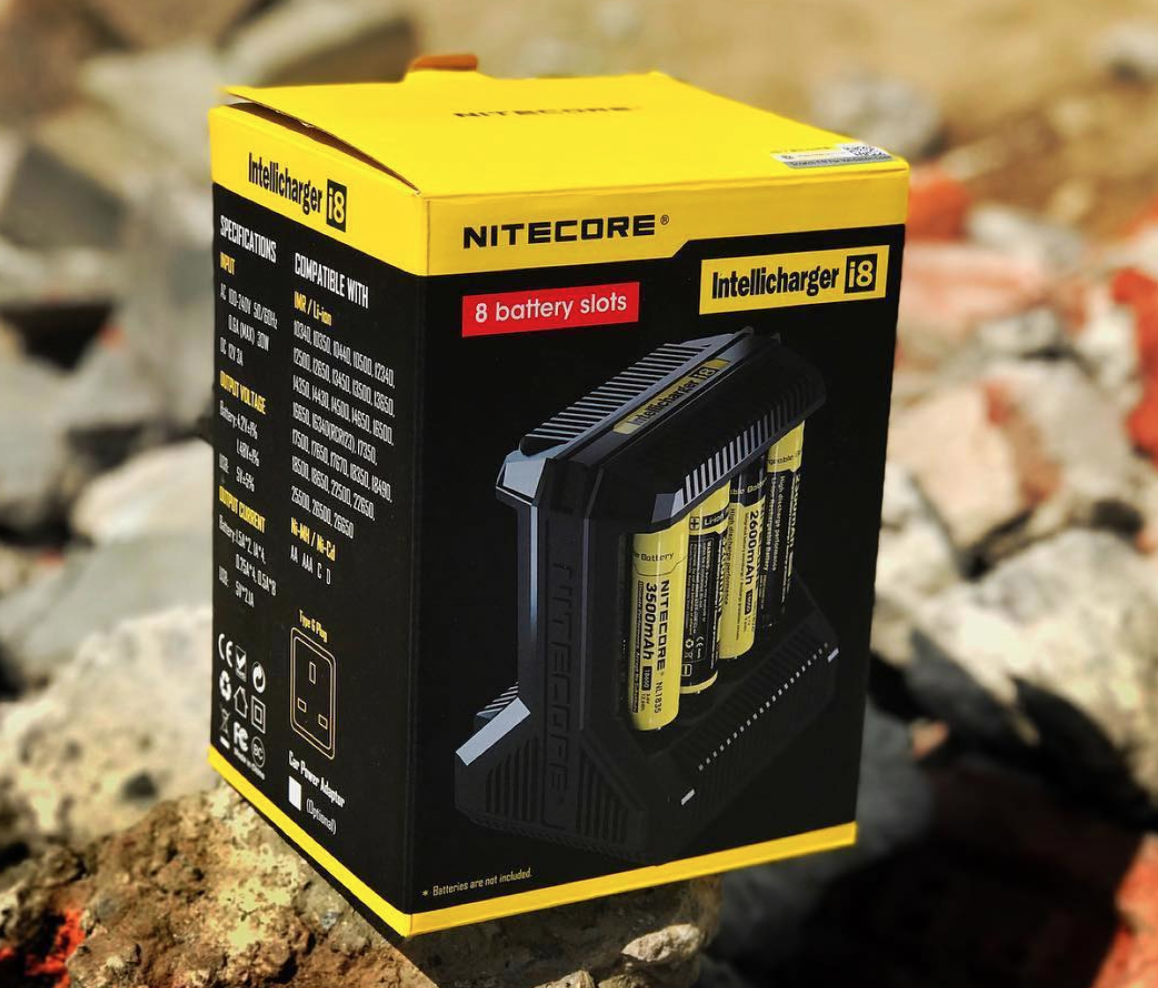 The i8 – Another Great Option From NITECORE. Check Out All The Models On Offer Here

It’s legible in all types of light, can be switched off when you’re sleeping and displays a wealth of information –– charging progress, battery type and voltage –– about what’s being done to your batteries.

Furthermore, you can also keep track of how long a battery has been charging for and how much power it has used. Basically, everything you could want to know and more.

The DigiCharger D4 also knows when it is getting too hot thanks to its built-in temperature monitoring system.

It also features a pretty advanced heat dissipation mechanism, which means you can leave your batteries charging all night without fear of waking up inside a fiery inferno.

It also supports reverse polarity protection, meaning if you put the battery in the wrong way around it will simply tell you there is an error and will do nothing until this has been remedied.

Bottomline? If you’re in the market for the best vape battery charger around, you have to be looking at NITECORE’s range.

It has multiple options available. Some charge two batteries, others will do eight.

Basically, the choice is yours. I’ve used a few NITECORE vape battery chargers over the years and they are near-flawless in their functionality.

For features, safety, and peace of mind, nothing comes close to NITECORE’s vape battery chargers.

This is why they’re the most trusted brand in the vaping space.