Law makers and bureaucrats are in the business of peddling lies, and when it comes to vaping they’ve got it all wrong – and the science is there to prove it…

Back in the day, circa 1940s onwards, Big Tobacco decided that in order to market cigarettes to the masses, it needed to make them look cool. To do this, they used simple tactics: get famous people to smoke and the masses will follow.

But it didn’t stop there. Big Tobacco even had doctors on its payroll. Back in the 1950s and 1960s, doctors – meaning your local family physician – would happily recommend smoking as a solution to deal with “chesty coughs” and “stress”. They even used the GIs overseas during WW2, sending them FREE cigarettes as part of the “war effort”.

The net effect? Tens of millions of Americans addicted to cigarettes. And this trend would go unchecked until the mid-to-late 1980s, when tobacco companies were finally ousted for what they were – mongers of death.

Enter Vaping – AKA The #1 Tool For Killing Cigarettes

But a closer look at the data, tells a rather different story. Between the years 1990 to 2010, the smoking rate amongst UK adults remained more or less flat – around 20%. Then something happened around 2012-2014 which shaved off another couple of percentage points.

And what was that? Most likely the rise of vaping devices. Things didn’t really pick up until around 2013/14. People either didn’t know or didn’t trust ecigs. But since then, attitudes have changed in the UK and this has helped the company achieve record lows for smoking between the years 2014 and 2019.

In complete contrast to the successes the UK is having with vaping, in America it is now viewed as enemy #1 by state officials and governors. San Francisco has just instigated the first ever, state-wide ban on ALL vape products, and many more will follow suit.

And the reason? Made up stories about teen vaping, which have been debunked numerous times by researchers and public health activists. Their official line is that they don’t want another generation getting addicted to nicotine, which is fine. But the problem is they haven’t banned cigarettes…

Why? Money – US states are addicted to Big Tobacco profits. This is the only reason why you can still buy cigarettes in San Francisco, but not vaping devices. And do not let anyone else tell you different. It’s not about kids. It’s not because they care. It’s because of money and Big Tobacco’s powerful lobbyists in Washington.

Do vape companies target kids? This is a constant point made by anti-vapers – and in some cases they have a point. But the elephant in the room is that it is ILLEGAL for minors to vape; we have laws for a reason ,after all. But the idea that evil vape companies are actively targeting kids is, frankly, absurd. All they’re doing is following a well-worn marketing playbook.

Case in point: just take a look at how alcohol is marketed… I mean, how does any of the below NOT appeal to kids? 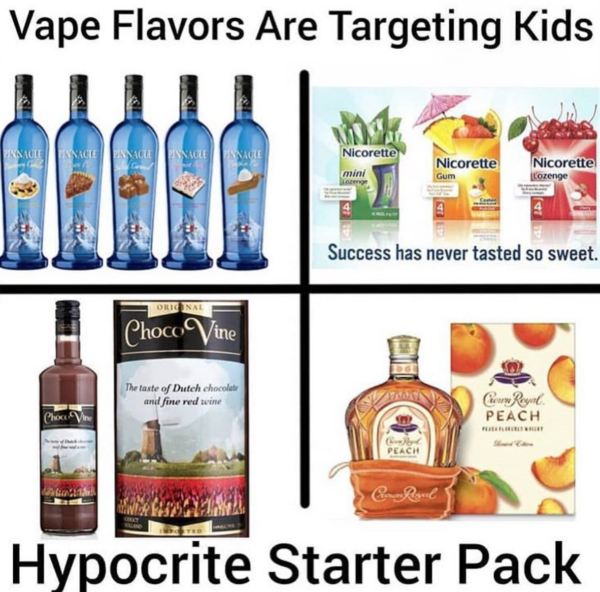 EVERYBODY Markets To Kids. It’s The American Way (Image Source)

According to the FDA’s logic, ALL vapes should taste like cigarettes. Why? No one really knows. It’d be like saying ALL electric cars have to make an engine noise just so no one feels too startled by the shift in technology.

For this reason, and following the FDA’s logic, how come alcohol, a substance that takes many lives every single year, is allowed to be marketed as if it were a soft drink? Ditto fast food, another big killer in America. I mean, where is the consistency?

Even the FDA’s now-defunct leader, Scott Gottlieb, said the following about e-cigarettes: “If you can fully switch every currently addicted adult smoker who is using combustible tobacco products onto e-cigarettes, you will have a profound impact on public health. And some people are able to switch completely. We think that is a public health benefit.”

And yet… we’re now looking at bans in San Francisco? How does this even happen? The FDA has flat-out admitted that ecigs are better for the nation than a smoking habit, and yet it is vaping devices that are being vilified while you can still freely buy cigarettes.

Meanwhile, in the UK, vaping is now being pushed as the #1 tool to kill off smoking inside a generation. And the reason? I guess it’s partly down to the fact that the UK isn’t reliant on Big Tobacco profits to fund its states…