Rocket Man by One Hit Wonder Review: This E Juice is Smoother Than Kenny G

One Hit Wonder made a HUGE impact on the vape scene with its now famous Muffin Man E-Juice.

We recently gave a 180ml bottle of the stuff as part of VapeBeat’s first ever giveaway.

The response to that competition was INSANE and testament to just how popular One Hit Wonder are with vapers all over the world.

Unlike its name suggests, there is definitely more to One Hit Wonder than Muffin Man.

The company produces other flavours as well — flavours like Milk Man, My Man, Police Man and, the focus of this review… Rocket Man by One Hit Wonder.

I love the stuff, but I had never sampled Rocket Man by One Hit Wonder until I got sent a bottle last week.

So, how does Rocket Man stack up? Let’s find out, shall we? 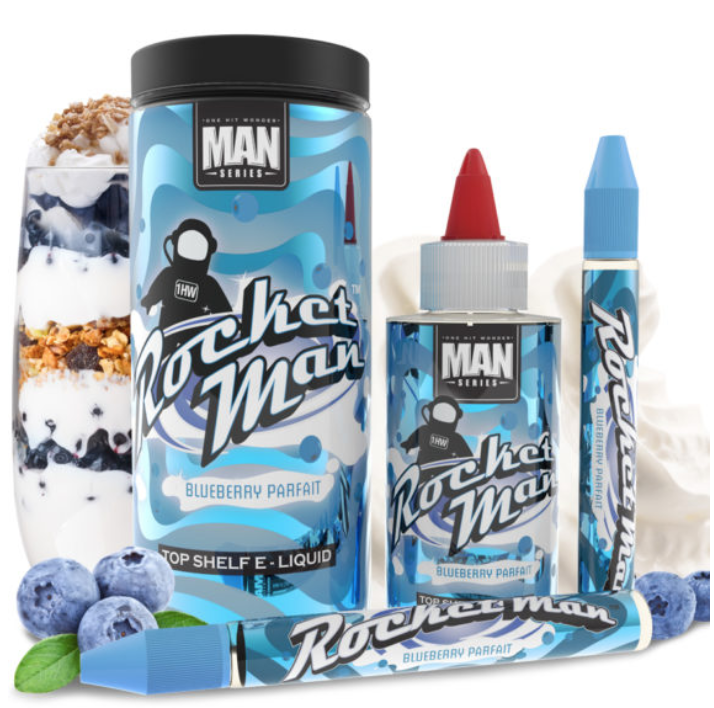 Greek Yogurt, Fresh Mountain Blueberries, and Savoury Granola balance out the Rocket Man by One Hit Wonder making this a great Blueberry Parfait.

This harmonious blend is without equal in the yoghurt-flavour segment of the E-Juice world.

After two puffs I know I am going to like this E-Juice, it really does hit you that quickly. God knows how One Hit Wonder makes this stuff, but whatever they’re doing they have it down to a FINE ART.

This is a sweet, tangy, creamy mix of a juice.

I’ve had many creamy/fruity E-Juices in the past but none have been as solid as Rocket Man by One Hit Wonder; it just tastes so goddamn thick.

There is one big problem with this type of E-Juice, though — it will turn you into a chain vaper.

I tested Rocket Man by One Hit Wonder inside the Dead RABBIT, the SMOK TFV12 Prince and the Kensei RTA and it performed equally well in each setup.

Cloud production is great too, but that’s to be expected with its 80/20 VG/PG composition.

Besides flavour, which is amazing, Rocket Man by One Hit Wonder is one of the smoothest E-Juices I have ever vaped.

I honestly cannot think of another E-Juice I have tried that is as smooth and tasty as this stuff, so whatever you’re doing One Hit Wonder, please, for the love of god, keep doing it!

These 15mL bottles come empty and need to be filled but that task is no problem and easily done.

Everything about One Hit Wonder just hits the mark.

The company is exceptional and is, in the estimation of this reviewer, perhaps one of the finest E-Juice manufacturer on the planet.

If you vape and you haven’t tried One Hit Wonder’s E-Juices yet, you sir, are missing out on something very special indeed!