We all know vaping is better than smoking, but can you actually improve your health, mood, and well-being by vaping vitamins? Inhale Health thinks so. And in this review, I test out Inhale Health’s B12, Caffeine, and Melatonin Vape Pen… 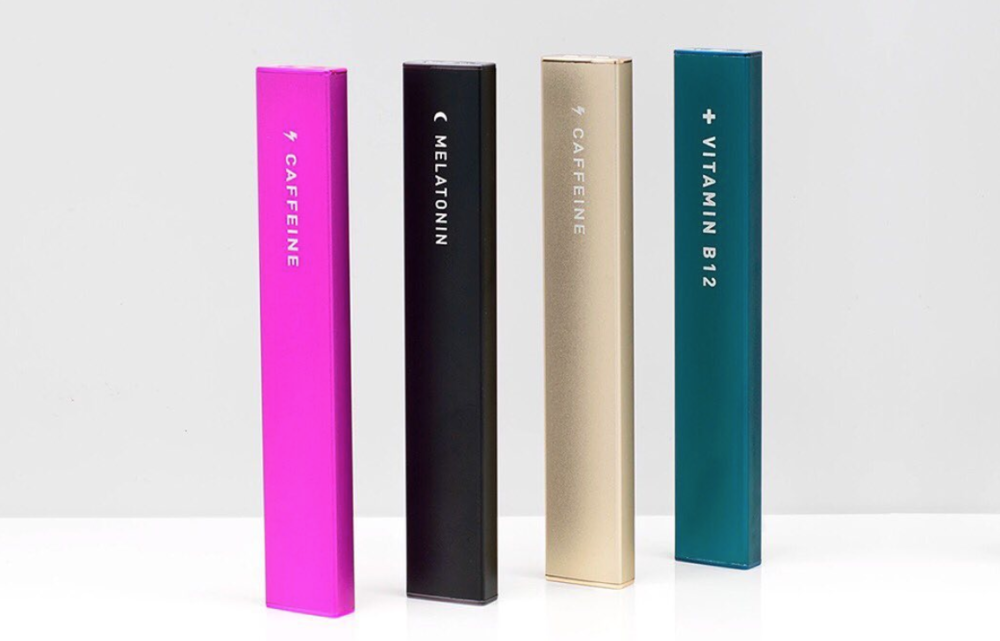 Inhale Health is a company that specializes in vape pens – with a twist. Instead of vaping nicotine, Inhale Health’s vape pens use vitamins instead.

And you have an entire medley of vitamins to choose from – from melatonin (that’s for sleep), caffeine (for staying awake), B12, and it’s a newer product, the Anti-Cigarette – a product that is designed to help smokers quit without nicotine.

Obviously, the big question here is do they actually work? The short answer is, yes, Inhale Health’s products work great. Some of them are harder to rate than others, for obvious reasons – you cannot tell if your B12 levels are up for instance.

Whereas with the caffeine one and the melatonin one, the difference is obvious – you feel more awake or you get to sleep easier. I really like Inhale Health’s Melatonin vape pen: it works, it helps me fall asleep faster, and I noticed the difference compared to when I didn’t take it.

With the caffeine vape pen, again, the results are pretty obvious: I take it in the morning, instead of coffee, and after a few puffs I immediately felt the results – perkier, more alert, more energy. I now often use Inhale Health’s caffeine vape pen prior to and during workouts to keep my performance up.

So, yeah: they work, they taste great, and they don’t cost much either – as you can see inside Inhale Health’s latest deals page.

Inhale Health makes a trio of vapes that are designed to improve your health, well-being, and energy levels. It does this via three specific vape pens – one contains B12, the other caffeine, and the third melatonin, a chemical that is naturally produced in the brain that helps you sleep.

If you’re deficient in B12, like most vegans and vegetarians, supplementing with B12, as well as a whole host of other things, is recommended, as you’re missing out on vital nutrients by not eating animal products. If you can’t sleep, melatonin helps. And if you lack energy, caffeine will give you a boost of energy. Inhale Health is targeting three major problems with its products. But do they actually work?

I received samples of all three vape devices and used them as directed.

Let’s take a look at each one individually.

B12 deficiency symptoms are pretty nasty, ranging from everything from nerve problems (tingling and numbness) to vision loss, pale skin, and weakness, light-headedness, and tiredness. B12 is essential for the body, and the richest source of B12 is grass-fed beef. If you’re a vegan, or vegetarian, you’re not getting anywhere near enough B12, so you have to supplement.

I learned this the hard way a few years back; I went vegan for 12 months, was fine for about six months, and then progressively got pretty sick. In the end, I got shingles (on the side of my head), and that prompted me, after a visit to my doctor, to start eating a more balanced diet once again. So, yeah, B12 is important. 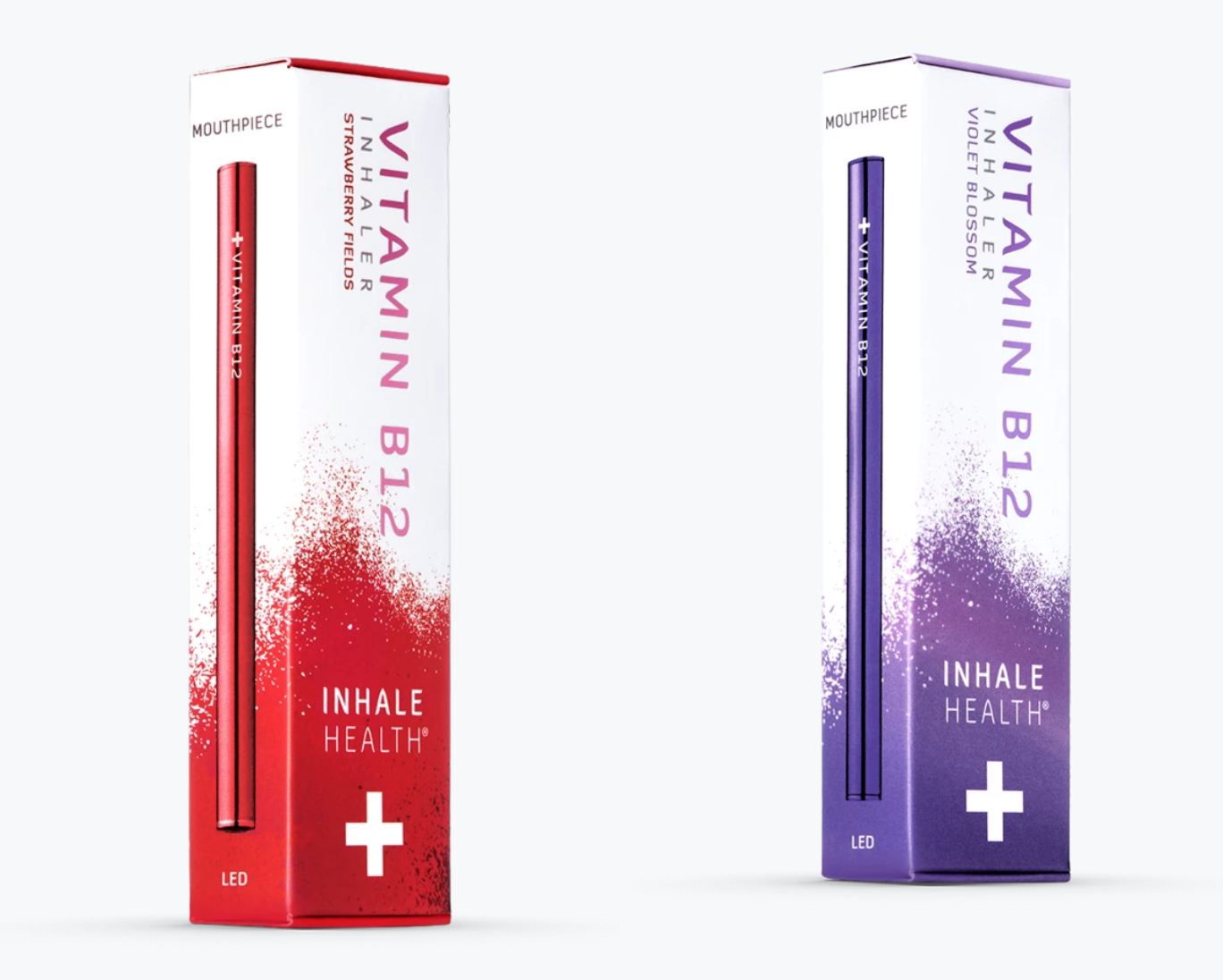 It’s hard to say whether this one had much of an effect on me; I eat plenty of rich, B12 sources in my diet, so I’m not lacking in this department. However, my partner, who’s semi-vegetarian, said she definitely noticed a difference in her energy levels after using Inhale Health’s B12 vape pen for just a couple of days. She also really liked the flavor options, notably strawberry, and the fact that non of Inhale Health’s vape pens contain nicotine.

Whether this was a placebo effect or not is tricky to say, however, my partner remains adamant that it made a noticeable difference to her energy levels and overall wellbeing. So much so that she asked if I could get her some more. Since then, she’s been using the Inhale Health B12 Vape Pen off and on most weeks, topping up her levels.

Testing the caffeine vape pen was tricky; I drink a lot of tea and coffee and ingest a lot of nicotine. I run on stimulants basically, so testing the effect of Inhale Health’s Caffeine Pen required some planning. I tested it on a Monday, skipping my usual coffee and tea in the morning. I took a few hits on the caffeine pen, then got ready for my morning run. Before leaving, I took another couple of hits.

On my way to the track, I noticed that I felt as if I had had some coffee. I was awake, alert, and focussed. My energy levels remained elevated during my morning 5K run; I felt more or less the same as normal. The effect isn’t as pronounced as coffee; it’s more subtle, residing in the background. There’s no WOOSH of energy, just a steady build-up. 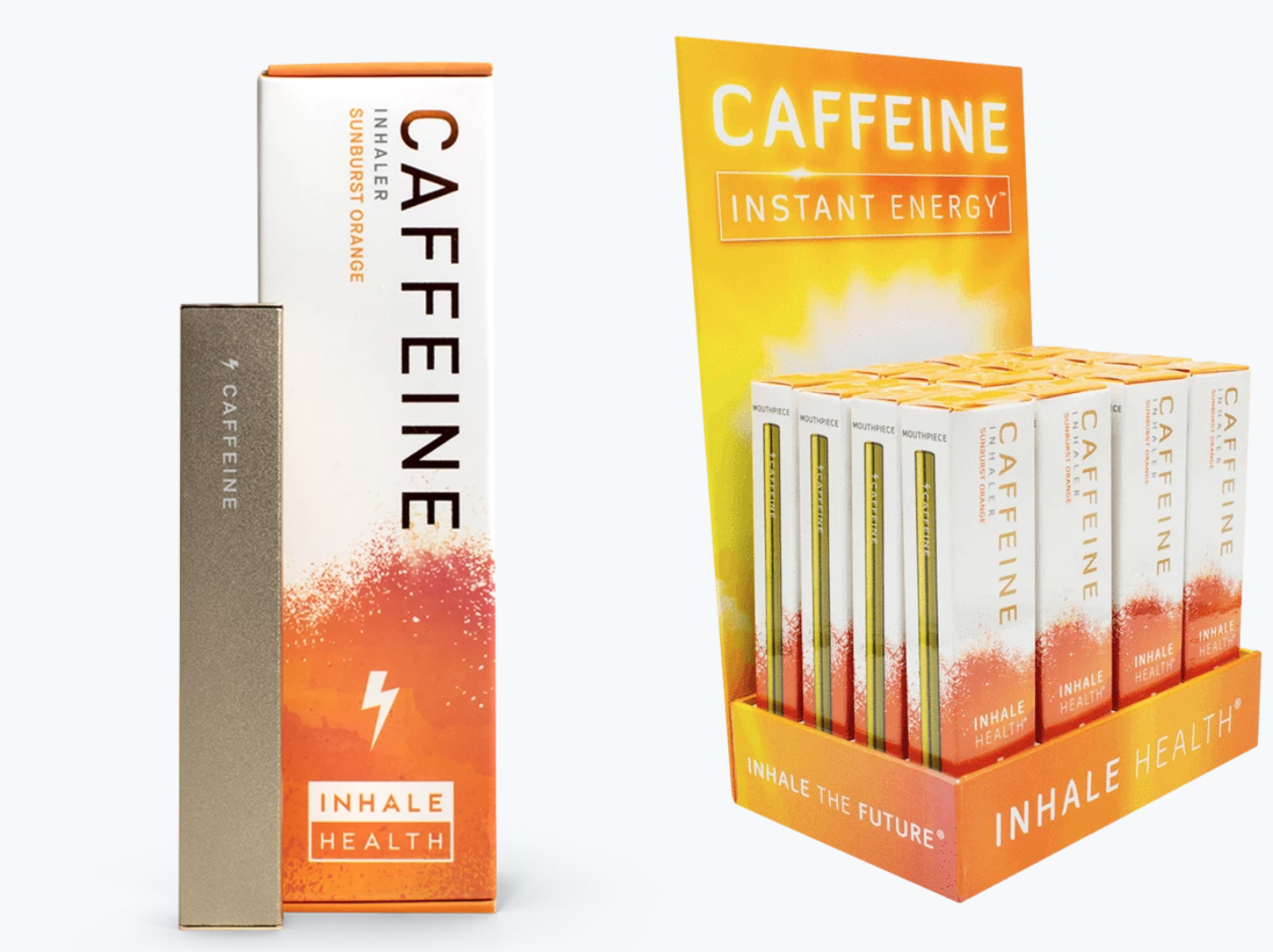 And this got me thinking. Inhale Health’s caffeine vape pen could well be ideal for people that have a general intolerance to coffee but want to access the benefits of caffeine in the morning. Because it’s subtler, you’re less prone to anxiety or getting the jitters. The effect is real, however, and it is noticeable mere minutes after having a puff.

The really good thing about Inhale Health’s caffeine vape pen, however, is that the energy it delivers appears to sustain itself for long periods of time. I took around 7-10 hits before my run and I felt great on the way, during, and after my 25 minute run around the track. Is it better than coffee? No, I love my coffee. But for those that don’t like coffee, and want to limit their sugar intake by avoiding soda-based energy drinks, Inhale Health’s caffeine vape pen could be just what you’ve been searching for.

I messed around with Melatonin A LOT at university, after reading loads of research on it. The benefits of this supplement are immense, especially if you have trouble sleeping. Melatonin is a naturally occurring chemical in the brain. It responds to darkness and makes you feel sleepy, but modern life can mess with your circadian rhythm, your body’s internal clock, and this, in turn, can lead to sleep disorders like insomnia or difficulty in nodding off…

The Inhale Health Melatonin Vape Pen delivers a sizeable dose of melatonin direct into your system. Take it before bed, and you’ll be asleep in no time. I tested this one pretty extensively, using control nights, where I didn’t use it, and the results were pretty dramatic. On the nights I used it, I fell asleep way faster. Most of the time I didn’t even remember trying to fall asleep. 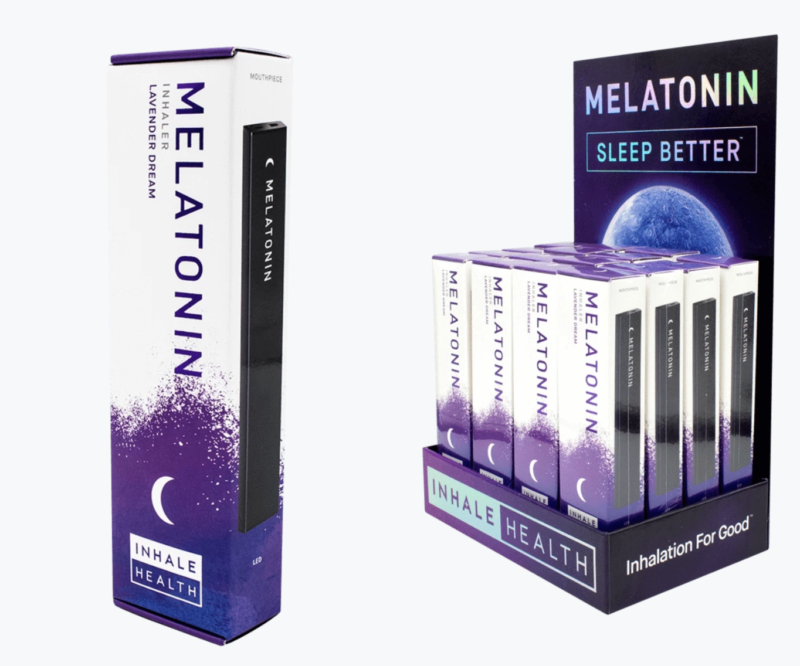 I also used it on a recent long-haul flight. I always struggle to sleep on planes, regardless of how long on I’m on one, so I put the Inhale Health Melatonin Vape Pen to use and, miraculously, I managed to get six hours sleep on a 12-hour flight (and all without my usual fix, whiskey). Normally, you take melatonin via tablets but this method isn’t ideal, as its absorption through the GI tract takes too long.

Conversely, when you vape melatonin it is delivered straight into your bloodstream and the effects happen within a few moments. Take 5-10 puffs, and in about 3 minutes you’ll start feeling more relaxed. If you close your eyes now and get comfortable, you’ll be asleep inside 10 minutes. I’ve used several of these pens now, and they work great. Normally, I have no trouble sleeping – except on planes – and even I have noticed the difference.

If you’ve tried multiple supplements to aid your sleep, and none of them have worked, I would strongly recommend you try Inhale Health’s Melatonin Vape Pen. It’s available in a range of flavors and it does not contain nicotine, so it is safe for use by all types of users. Even those that don’t vape!

How Long Do They Last?

You’re not using these vape pens like traditional vapes, so they last A LONG time. You get around 400 puffs per pen and most users will only need a few puffs a day, so that means you’ll get around a month’s worth of usage from each vape pen in Inhale Health’s range.

All the vape pens in Inhale Health’s vape pens are 100% disposable, so there’s no recharging required. Once it’s finished, just throw it away. I’ve tested multiple units of each product in the range and found that longevity is very consistent – you get around 400+ puffs and this, with my level of usage, ensuring the pen lasted for about a month.

How Much Do They Cost?

Inhale Health’s vape pens cost $19.99 each, although there are options to buy multipacks via its online store. If you’re serious about the product, or you’ve sampled one and liked it, I would strongly advise you bulk the multipacks, as you get way more bang for your buck.

What Does Science Say About Vaping Vitamins?

Because we’re talking about vaping, science is wary of wholeheartedly recommending that you vape vitamins. Despite the fact these vape pens contain ZERO nicotine, the MSM often considers devices like these gateways to smoking and/or vaping nicotine.

This is complete claptrap; there’s no nicotine, so there’s no chance of getting addicted to vapable vitamins. On a more positive note, the science behind vaping vitamins is actually rather positive, once you get past ALL the usual caveats. For instance: 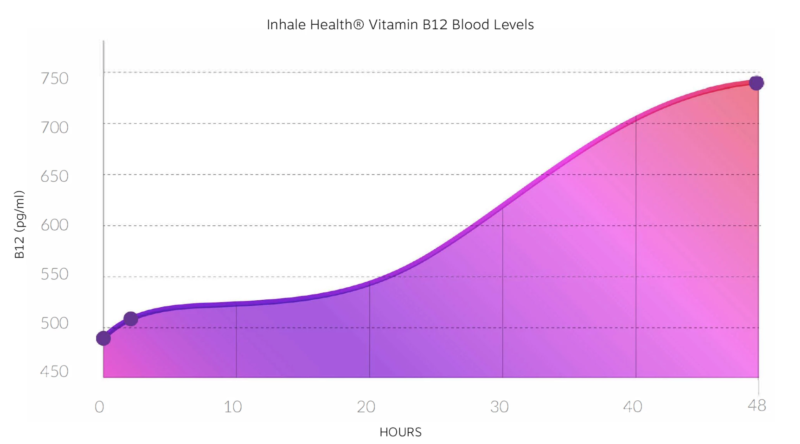 “To further evaluate the efficacy of pulmonary absorption of the inhaled B-12 over and above the evidence afforded by the clinical and hematological response previously described, urinary excretion studies were performed… Upon oral administration of B-12 at dosages as high as 10,000 mcgm B-12 activity in urine has been shown to be less than 0.05 millimicrograms/ml. After inhalation of only 200 mcgm of B-12 in saline, B-12 activity in the urine reached the level of 0.26 millimicrograms/ml and following inhalation of approximately 500 mcgm of B-12 in a lactose powder B-12 activity in the urine rose to 0.134 millimicrograms /ml. Direct pulmonary instillation of 100 micrograms of crystalline vitamin B-12 by means of the bronchoscope resulted in a urinary excretion (9.76 millimicrograms/ml.) pattern equivalent to the intramuscular injection of 60-80 mcgm” – F.J. Smith, R.W. Monto, J.W. Rebuck, “B12 Inhalation Therapy in Pernicious Anemia,” Trans Am. Clin. Climatol. Assoc. Vol. 64, p. 27.

In the context of vitamin B12, vaping is better than ingesting oral supplements. Taken in this context, one could assume things like caffeine and melatonin would be similar. And in my experience, they are – the GI tract is notoriously slow at releasing content, so effects take longer. This is why pot cookies take so long to come on. They have to pass through your gut before the THC hits your bloodstream. But if you vape THC, you feel it almost immediately. And the reason? It goes straight from your lungs into your bloodstream – it’s a more efficient delivery mechanism.