How One Vaping Activist Took on Facebook Censorship And WON

I once came into work one morning to find a page with 14,000 likes had been deleted without warning.

And it doesn’t seem to matter what you promote, as Aaron Biebert, director of Vape Documentary A Billion Lives, found out.

A Billion Lives — check out VapeBeat’s Interview With The Director HERE — aims to expose many of the lies that have dogged vapers since e-cigs began.

As most readers here will probably know, many of these lies have been propagated by the pharmaceutical industry via the links with big-pharm funded anti-smoking groups.

These groups have fed a continuous stream of half-truths, misrepresented or poorly conducted studies and lies to a media which loves scare stories.

With one billion people predicted to die from smoking this century, the stakes are high.

Via interviews with doctors, scientists and health leaders, A Billion Lives aims to give the true picture of the debate.

Clearly, this is a documentary that aims to inform, to promote debate and expose corruption.

So Aaron was shocked when Facebook blocked his adverts.

But he assumed it was a mistake:

“When we inquired why the first one was blocked, they responded by informing us they did not allow advertising of tobacco products. Obviously, we are a film, so we responded with an explanation to them, assuming they would fix the situation. They did not. Instead, they sent back an email telling us that our ad was against their advertising policies and their decision was final.

“The post we were boosting was a West Virginia sunset. It made no sense.” 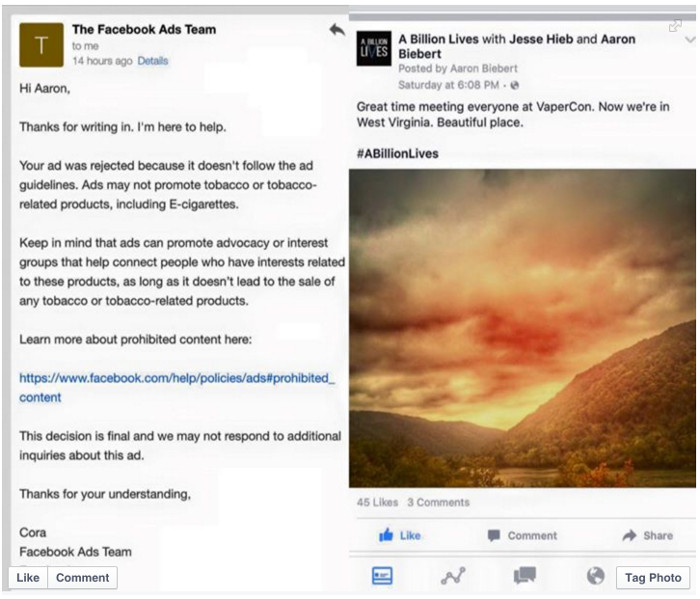 Aaron enlisted vapers to help him fight the ban.

A protest tweet was shared over a hundred times, and a letter of protest almost 700 times, receiving over 50,000 views, and a protest video received 1000 shares.

In response, a person higher up in the chain in Facebook reached out to Aaron, and the decision was overturned.

Vaper activism can be difficult to maintain. There are so many petitions to sign, and battles to fight.

But as Aaron shows, that if enough of us work together, we can make noises.

And, as in this case, we can win battles.

Keep up the fight!