“Nicotine Is NOT A Carcinogen” – Public Health England

It’s TIME the FDA woke up to the facts. Nicotine Is NOT A Carcinogen, says Public Health England. And the UK is now 100% Pro-Vaping as it aims to kill smoking within a generation

A tale of two countries, similar but different. In one, you can legally buy weed but in others, this freedom is decades away. In one guns are legal, and in the other possession of a firearm will get you serious jail time.

And yet, the country with the most stringent laws on EVERYTHING, the UK, is now a shining light of progressiveness with respect to vaping regulations, while the US is on the verge of banning online sales!?

I say, on the verge, but flavor bans are now in place across the entire length and breadth of America, from Sacramento to New York City.

Why are they banning flavor? Simple: in the US, tobacco is big business, and there are plenty of kick-backs to be had from its survival. This is why you can still buy Marlboro cigarettes but you cannot buy a flavored product that is 95% safer. 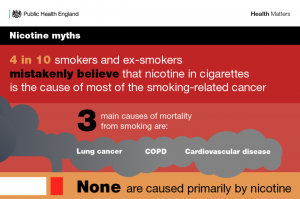 Misinformation About Nicotine is RIFE

The UK, and its health-facing institutions, like Public Health England and the Royal College of Physicians, have long been supporters of vaping, as a means to get people off of cigarettes, and today this momentum continues.

Smoking is the leading cause of preventable illness and premature death in England. In 2016 alone, there were around 78,000 deaths attributable to smoking, representing 16% of all deaths across the UK – Public Health England.

PHE also confirmed (please take note, California) that “Nicotine Is NOT A Carcinogen”. Furthermore, it claimed that misinformation about nicotine is “rife amongst smokers and health professionals”, and that people believe it causes most of the harm of smoking.

The FDA has issued a law that prohibits vape shop owners from claiming ecigs are better for you than traditional cigarettes, despite evidence that 100% backs these claims.

Meanwhile, in the UK, Public Health England is telling vape shop owners to “engage actively with smokers who want to use an e-cigarette to help them quit.”

It added: “More can be done to combine the popular quitting method with the most effective quitting aid, to maximize the number of smokers quitting successfully.”

Again, the 95% safer point is made. By RCGP, BMA and Cancer Research UK. All agree that while vaping isn’t 100% safe and that you’re better off doing neither smoking or vaping, ecigs are infinitely preferable to smoking.

“Based on an assessment of the available international peer-reviewed evidence, PHE and the RCGP estimate the risk reduction to be at least 95%. In 2018 so far, 3 major US reports (National Academies of Sciences, Engineering and Medicine, American Cancer Society and the US Annual Review of Public Health) have found that e-cigarettes are substantially less harmful than smoking.”

The FDA maintains that vaping is a gateway drug to cigarettes, a false argument that has been used time and time again in the States.

I’ve lost count of the number of times this has been debunked. 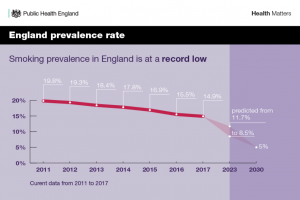 But I am happy to be on debunking duties once again: 50% of the UK’s smokers have now quit their deadly habit, thank to vaping – 50%!

I’ve used gum and patches in the past to little effect; the gum tastes disgusting and the patches make me nauseous and, bizarrely, sleepwalk as well.

Vaping has been shown to kill smoking in its tracks, and the reason it works is simple: you get the same sensation, just without 95% of the health risks, a fact the FDA needs to acknowledge before it is too late.

Case in point: “there is growing evidence that e-cigarettes are helping many thousands of smokers in England to quit. The available evidence from research trials suggests that their effectiveness is broadly similar to prescribed stop smoking medicines and better than NRT products if these are used without any professional support.”

Public Health England added: “E-cigarettes are particularly effective when combined with expert help from a local stop smoking service. “In 2017 to 2018, around two-thirds of smokers who got this support stopped smoking successfully.”

Following on from PHE’s guidance, the UK has now implemented a variety of tools for smokers to utilize on the journey away from cigarettes.

Pharmacies will be trained with knowledge of ecigs and the British Medical Association and the Royal College of General Practitioners even produced a video that details WHY you should quit smoking with vaping (see below).

Bottomline? The US needs to wake up and follow the measures being taken by the UK.

Public health is of vast importance and recognizing a tool for curing one of the biggest afflictions in modern society is or huge importance. The net effects are enormous, saving billions in health care, and it is now time the FDA woke up to this fact.

Time to wake up, America… before it’s too late.