The FDA Will Increase US Smoking Rates By Penalising Vaping

Take vaping and ecigs out of the equation and all you are left with is rising US smoking rates and more death. It’s really that simple, so why is the FDA hellbent on killing vaping in the US?

If somebody invented a way to get every single adult smoker off of cigarettes more or less overnight, you’d think that technology would be lauded by government and its agencies like the FDA.

Especially when said technology has been vouched for by Public Health England, UK Cancer Research, and The Royal College of Physicians as being 95% safer than smoking.

Dr. Lion Shahab, a senior lecturer in the department of epidemiology and public health at UCL, said: “Our study adds to existing evidence showing that e-cigarettes and NRT are far safer than smoking, and suggests that there is a very low risk associated with their long-term use. We’ve shown that the levels of toxic chemicals in the body from e-cigarettes are considerably lower than suggested in previous studies using simulated experiments. This means some doubts about the safety of e-cigarettes may be wrong.”

In a completely bizarre fashion, however, the FDA’s draconian approach to vaping is the complete opposite of this; in fact, the agency appears to be doing all it can to keep people smoking.

Why? Because of a bulls**t study about teenage vaping rates.

US Smoking Rates At All-Time Low (Thanks To Vaping)

The FDA doesn’t seem to care about the millions of smokers that have quit using vape devices and, lest we forget, the untold billions of dollars that this has saved the country in healthcare costs.

Or the fact that smoking rates are dropping like flies. No, rather than focus on what is one of the biggest public health wins since the arrival of penicillin, the FDA is instead attempting to destroy the vaping industry from the inside out.

And it has no solid argument for doing this – just that it doesn’t want kids vaping. 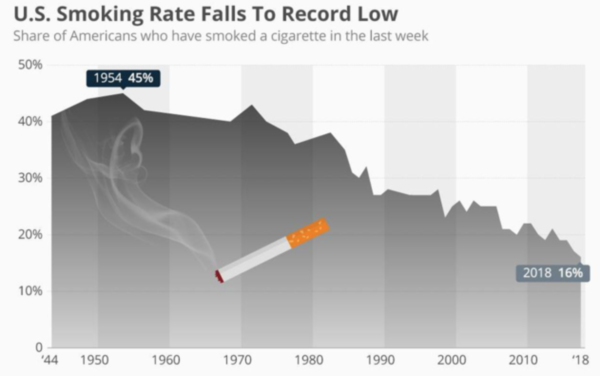 Well, guess what? Neither do we. No one wants kids vaping or smoking. But it is NOT the job of the FDA to penalize millions of adults because a few rebellious teenagers have tried vaping. Not when there was no way near this level of scrutiny when thousands of kids took up smoking in the 1960s, 70s, 80s, 90s, and 2000s?

And then there’s the little fact that vaping is less popular with school kids than alcohol and cannabis. And, once again, where is the FDA’s moral outrage on this? Why isn’t it tackling these issues? Or the current opioid crisis it helped create?

The only logical conclusion one can draw is that the FDA is simply doing as it’s told for the benefit of special interests – special interests like Big Tobacco and Big Pharma. Because these are literally the only groups that will benefit from vaping being destroyed in America.

Everybody Loses Except Big Tobacco…

If the USA followed the UK’s lead and championed vaping as a tool for destroying smoking within a generation, things would progress quickly.

Smoking rates would decline month on month; the health of the public would improve; there would be less strain on doctors and health care professionals.

Within five years, millions of lives could be saved and extended. And all of this would happen without any tax dollars being spent. This is why the UK is now pushing vaping hard; it knows the science and the facts and it wants to rid itself of smoking-related diseases within a generation.

When you take into account all of the above, the only conclusion one can draw is that A) the FDA is actively working in cahoots with Big Tobacco or B) it is completely incompetent or, worse, highly irresponsible.

I mean, just look at what the now ex-FDA head Scott Gottlieb said about his approach to curbing youth vaping: “I’m willing to narrow the off-ramp for adults to close the on-ramp for kids.”

Really, Scott? You’d sacrifice millions of tax-paying adult smokers for a few kids that, if vaping weren’t around, would be trying smoking instead? As I said: the FDA’s position is either completely compromised or completely irresponsible. Either way, it is not good for all concerned.

Vaping is The Best NRT We Currently Have

I know, I know – you think I’m probably biased, as I run a vape blog. But this isn’t mere conjecture on my part. Far from it, in fact. Both the NHS and Public Health England in the UK, as well as Cancer Research UK, have all signed off on vaping as a safe alternative to smoking.

Not only that, studies have shown that vaping is dramatically more effective than traditional FDA-pushed NRTs from Big Pharma. In fact, nicotine gum and patches have such terrible success rates it is rather alarming that they’re even still a viable option.

Also: they contain nicotine but no tobacco just like vapes and ecigs and yet they are NOT classed as a tobacco product. How does this work? When the FDA classes ALL vape and vape paraphernalia as “tobacco products” simply because they might contain nicotine, NRT products like gum and patches should come under the same scrutiny, right?

And the reason is simple: they’re made by Big Pharma – and the FDA loves Big Pharma. So much so that it will happily help it peddle inferior products to the American public that do not work, while it takes drastic, draconian action against a newer technology that is 95% safer than smoking AND has ridiculously high success rates with stopping smoking.

If the FDA had even a modicum of actual empathy or feeling for the general well being and health of the citizens it serves, it would re-class vaping as a true NRT and help get it into the hands of as many current smokers as possible.

But they don’t because the US government is addicted to Big Tobacco profits and payouts from lobbyist groups. Your democracy has been obliterated by special interest groups and paid-for-hire politicians. Facts don’t matter anymore, only money talks. And that, my friends, is why vaping is now under attack.

It has absolutely nothing to do with teenage vaping rates.

If vaping is banned, the only thing that will change are smoking rates; they will start increasing again.