This post is LONG. But if you’re new to vaping (or use mech mods) it is 100% required reading. YOU DO NOT MESS AROUND when it comes to a vape battery. Period.

If you are looking for the best vape battery with the highest amp rating, what criteria should you use?

You should start by finding the manufacturer’s specification sheet, and checking what the “continuous discharge rate” (CDR) is.

There are actually two types of discharge rates that may be listed.

As vapers, we emphasize on the CDR as this is the specification that the manufacturer rated the vape battery to discharge the entire charge of the battery without going into thermal runaway and destroying itself.

The CDR is the industry standard for determining the vape battery’s capability to provide electrical current safely.

One can easily compare one model or brand to another based on this specification.

Pulse discharge ratings have no set standard for how long the “pulse” should be.

Every manufacturer’s definition is different.

For one company it may be 0.5 seconds, for another, it may be 2 seconds.

Choosing a battery solely on it pulse rating makes comparing different models and brands impossible because of the way different companies set up their pulse rating.

Have you ever considered using a vape battery because of its high pulsed current rating?

At first glance, the pulse rating seems to make a lot of sense.

After all, when we vape we don’t run our batteries continuously.

We only use them for a few seconds at a time.

And considering how much higher the pulse ratings are, versus the continuous ratings, it’s very tempting to choose a vape battery based just on its pulse rating.

As I said earlier, there are no standards for these pulse ratings.

These two examples will result in very different temperatures and performance.

The same vape battery could get a 40A rating one way and a 30A rating the other way. It makes comparing batteries by their pulse ratings impossible.

But that’s not the worse of it.

Choosing which vape battery is best based on pulse ratings is not only impossible, it can be unsafe, too.

What happens if our regulated mod autofires? Or our mech mod’s button gets stuck on or is accidentally pressed in our pocket?

If we have set up our mod with a low resistance coil that forces us to only rely on a battery’s pulse rating, we could be in big trouble.

We can easily overheat the vape battery, causing it to vent or explode in thermal runaway.

So how should you choose a vape battery to get both the most power for your mod and still be safe?

Either go by the CDR, or find a reviewer like Mooch that tests batteries beyond the CDr and records temperatures to know when it becomes unsafe.

But for longer vape battery life, consider running your batteries below their CDR. It adds a greater safety margin as the batteries age and lets them run cooler.

Six Reasons Why Not to Use the Pulse Discharge Rating

You might say, “My vape buddies and myself are running a 0.1 ohm coil on our mechs. We’re using a 40 amp battery. And nothing bad has happened yet. We be blowing dem clouds.”

I would answer that the keyword here is “yet”. We’re all free to choose what safety standards to use for our personal use. If you want to vape on that in the privacy of your own home, that’s your business. However, if you use that setup while out in public you are not only endangering yourself but others too. There’s an old saying: “Just because you can, doesn’t mean you should.”

Let me relate a true story here to illustrate my point. A couple of years ago there was a vape convention in Texas.

A bystander in the crowd was watching a cloud chasing contest, when suddenly he yelled out in pain.

He managed to pull his mech mod out of his pocket, momentarily tossed it from hand to hand like a hot potato, and then tossed it into the middle of the room.

Upon impact, the mod exploded like a grenade, releasing a fireball onto the carpet and sending metal shrapnel into the ceiling breaking several tiles.

The owner ran off never to be seen again.

It’s a miracle that the explosion went verticle and not horizontal, or dozens of people could have been seriously injured.

What was left of an exploded mechanical mod after a vape battery exploded at a vape convention.

A lithium ion vape battery which explodes has the power of an M80 or 1/4 stick of dynamite.

Put that into a metal tube such as a mech mod and you literally have a pipe bomb.

Vapers who sub-0hm on coils that are above the amp limit (CDR) of a vape battery are irresponsible and immature.

Maybe I’m just getting old and cranky, but I didn’t take up vaping to impress my friends by how much vapor I can make, or to compete in a non-sport competition at a vape convention.

I took up vaping because I believed it to be a healthier lifestyle than smoking.

As I said, everyone is free to set their own safety parameters, and I can only say what mine are.

Having had a vape battery explode in my first mech mod a few years ago, I tend to be more conservative.

I try to never exceed 50% of the CDR of a fully charged battery.

An ohm’s law calculator tells me that a 0.4-ohm build is as low as I would want to use.

Computations From An Ohm’s Law Calculator:

The reason that I place a 50% limit is that as the battery ages, the mAh of the vape battery degrades, as the mAh degrades so does the battery’s C Rating (amp limit).

So down the road, your 20A battery may only be a 10A battery.

It also gives a wider margin of safety should you experience a hard short.

Battery Mooch is an electrical engineer who works as an independent contractor designing and maintaining customized battery systems for a variety of corporations.

He has the know how and gear to do sophisticated bench testing of batteries, and has done safety tests on hundreds of 18650, 26650, and 18350 batteries.

Being a vaper himself, he is aware of the ideal characteristics a battery must have to be safe for vaping.

He is hands down the best battery resource person that I have run across.

He is becoming “internet famous” by appearing on vape related Youtube channels like Plumes of Hazzard, Grimm Green, and PBusardo.

You can view his research on his blog.

35A Plus CDR batteries: None. The batteries advertising 35A or more test out to only be 10A – 20A CDR. Don’t fall for the advertising hype.

30A CDR: There are six batteries to choose from. LG reigns as the king here with 5 entries with 30A, and the Sony VTC3 brings up the rear with 28A.

All in this category are limited to only 1500 mAh. When it comes to amps vs mAh, I guess you can’t have your cake and eat it too. 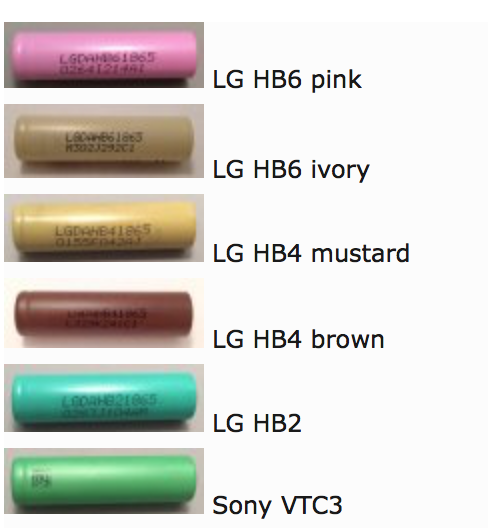 If you are looking for more mAh capacity but still have a decent CDR, you could go with the below 3000 mAh 20A CDR batteries:

I get all my batteries from VaporDNA – they have a great selection and plenty of options.

All the vape battery brands it sells are highly-rated too.

Another great option is Illumn.